Seattle's homelessness emergency, in one photo

Talk of the city's many crises obscures the overarching problem — a crisis of inequality. 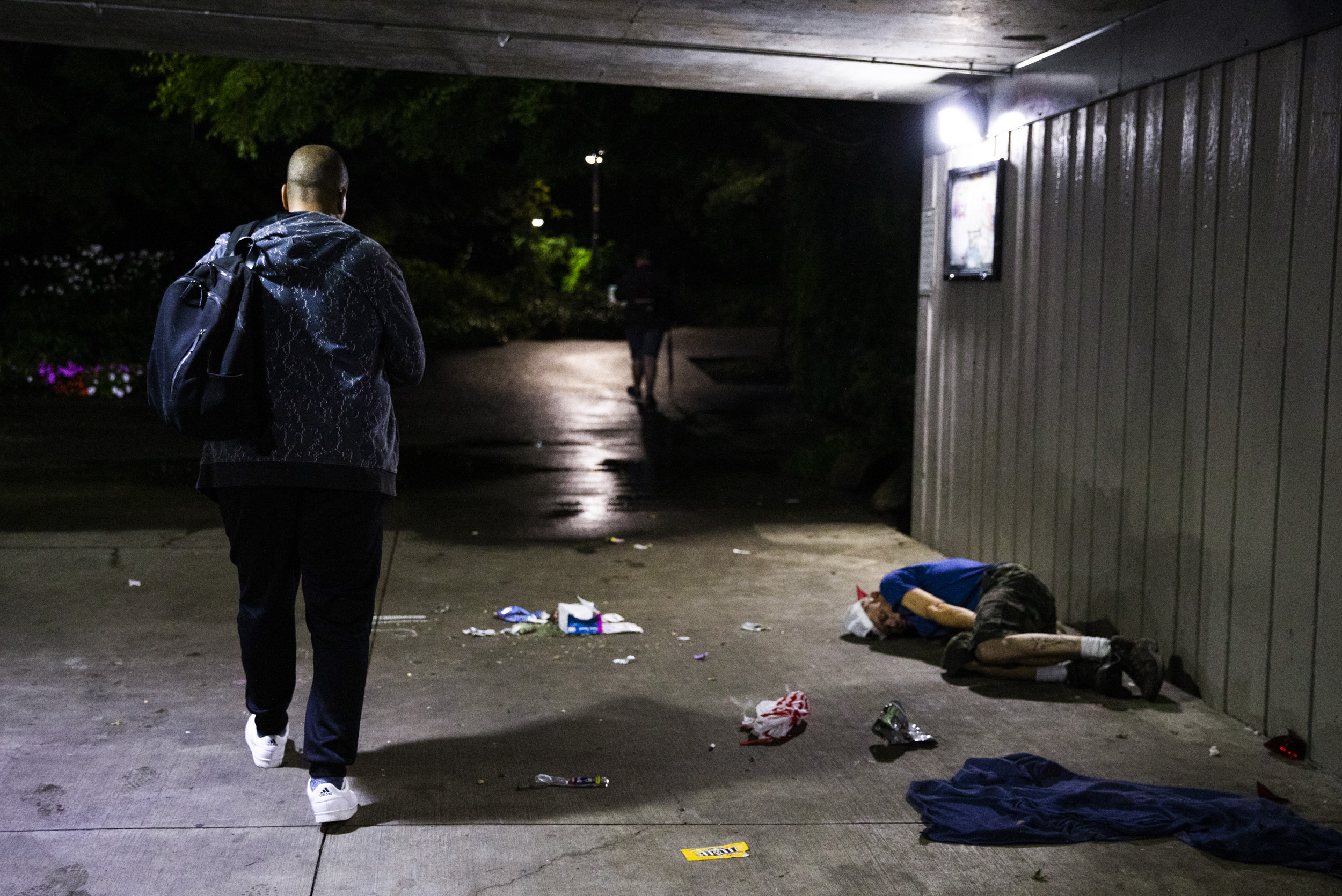 Dwight Williams passes a man sleeping in Freeway Park on his early morning walk to the bus on Sept. 18, 2019. Every morning when he walks through the park, he says it reminds him of where he was and where he could end up again after losing his Housing and Essential Needs assistance and being evicted. “It’s frustrating because that could be me,” Williams says. “I have done the before. I have slept outside.”

In a halting photograph published in Crosscut this week, a man named Dwight Williams walks under a brutalist fortress in Freeway Park, on the edge of downtown Seattle. It is morning, still dark. Fluorescent light fills the space, casting Williams’ shadow across the damp and grooved concrete. It stretches toward an underdressed, tattooed man lying on his side, asleep, his backwards hat crooked, his hands nestled between his bent legs. The sleeping man wears a blue T-shirt and black shorts. His head rests on concrete. Amid the trash, what appears to be a blanket lingers just out of reach.

The image, photographed by Crosscut’s Dorothy Edwards, is a study in cruel contrasts. It distills an ugly moment in Seattle history. Williams lives in housing purgatory, a place between stability and chaos, safety and danger. The biography of the man bathed in white light is unknown. Is he homeless? What induced the heaviness that made the ground seem a suitable place to rest? Was this, of all the options available to him, the most appealing? Regardless of the truth of his circumstances, the fact of his presence on the concrete is not shocking; it is another day in Seattle, a city that for years has been stuck in a humanitarian emergency.

Williams has been homeless before, and, because of a bureaucratic and economic mess, is once again flirting with life on the street. As reporter David Kroman notes in a profile of Williams, he couldn’t make rent for his studio apartment after transitioning onto federal disability assistance, a program that provides less financial support than the state program he’d been on previously. Today, he regularly sleeps on the floor of a First Hill apartment that belongs to a man Williams calls Uncle. The apartment is just down the hall from Williams’ old studio. “Williams did nothing wrong,” writes Kroman.

Talk of Seattle’s “homelessness crisis” or “drug crisis” or “housing crisis” tends to obscure the overlapping crises contained within the overarching problem, a crisis of inequality. Williams is teetering on the edge; the man on the ground, at least for the night, appears to have fallen off. Linger on this basic inequality. Imagine it refracted through the glittering glass buildings of downtown Seattle — totems of our city’s extraordinary if unevenly distributed wealth — and the warped state of what passes for normalcy in this town comes into clear view.

Williams’ story is devastating and banal, wrenching in its particulars, ordinary in its form. Thirtyfive of his neighbors are staring down a similar fate. And their shared disaster is just the tip of the iceberg. King County has over 11,000 homeless people living on the streets, in tents, cars and RVs, each attempting to survive a warzone of incoherent public policy, a collapsing social safety net, and world-historic inequality. Edwards’ picture captures this tragic geometry. By the grim standards presented to us today by Seattle’s underclass, it is Williams, walking in clean sneakers past the unconscious man, who seems the fortunate one. But Williams, a recovering heroin addict with Type 2 diabetes, knows he too is swimming with sharks. “Now I’m in the water bobbing, waiting for the first one to come up,” he told Kroman.

In the picture, Williams is a moment away from stepping into the last breath of night. Where he goes next is a mystery. The same could be said of Seattle.