Students and staff say an inequitable funding model leaves Seattle schools scrambling for resources at the start of each school year. 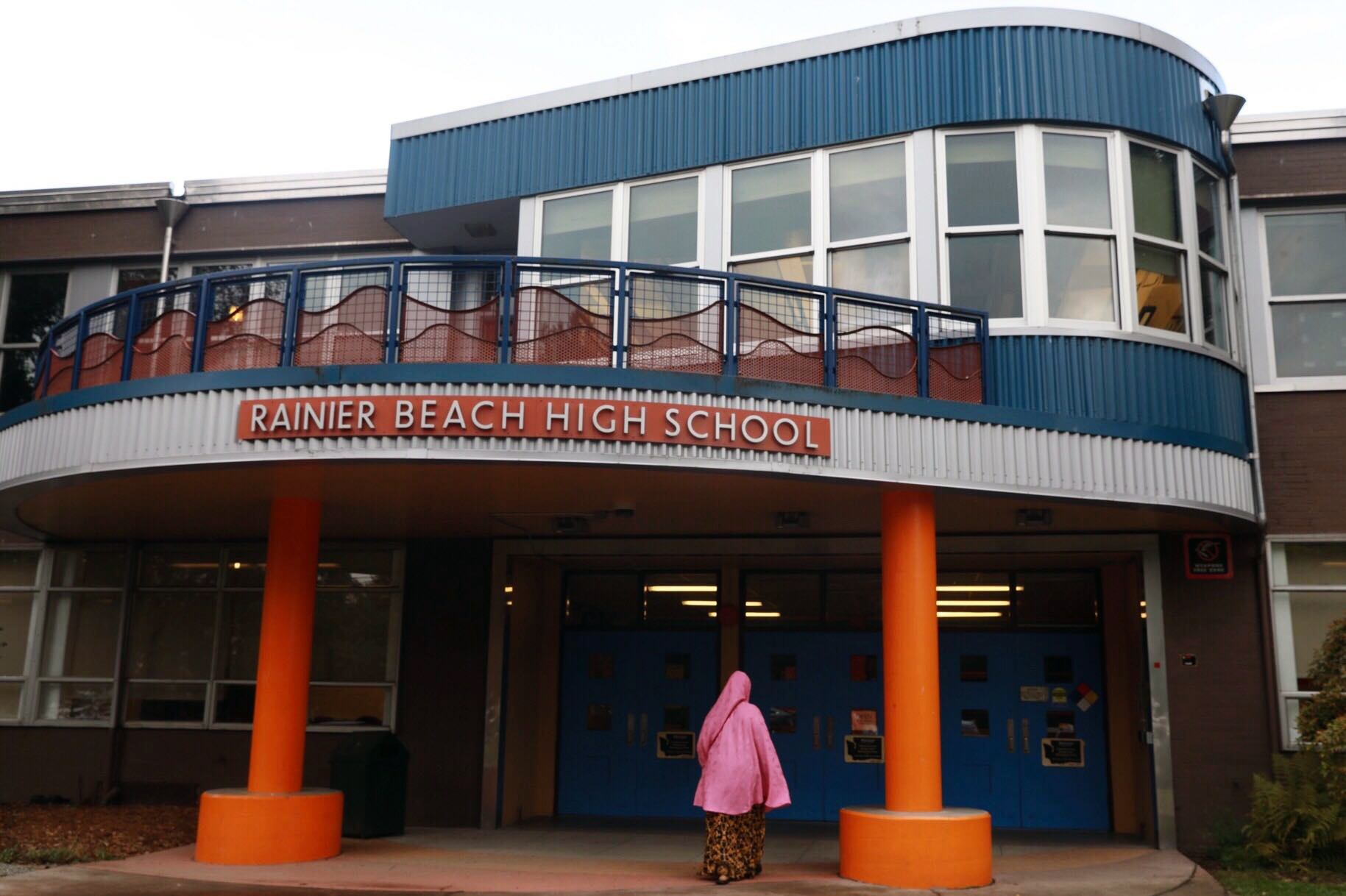 When the leadership team at Rainier Beach High School was handed enrollment projections last spring, the group realized the budget attached to that estimate would come up short. To compensate for the deficit, the South Seattle school would need to eliminate a core teaching position.

Now, 10th graders at Rainier Beach are slated to receive just a half-year of history instruction during the 2019-20 academic year. Students will also receive less instruction in visual arts as a result of the cuts.

“The scheduling is like a massive Sudoku puzzle,” Miller said, adding that it’s not yet clear how this will work logistically. “Half the kids might get it the first semester and half the second.”

Miller said the money problems at Rainier Beach stem from a larger flaw in school-funding allocations across the district, particularly to schools serving southeast Seattle.

Each year, SPS waits until October to get an official enrollment count at its schools. The district then adjusts funding to reflect the actual numbers. But the perpetual scramble to plan around tentative funding is burdensome for the students and staff at schools like Rainier Beach, said Kidist Habte, a junior at the school.

“I really hope that there are some policy changes so that when the district is given money, they give it to us at a reasonable time when we still have time to hire teachers,” Habte said. “And I hope that they do it in a very equitable way.”

Habte was among dozens of Seattle-area students who walked out of their classrooms on the first day of school in protest of funding inequities across the district. She helped organize a Sept. 4 rally at the Rainier Beach Community Center in which students demanded that Seattle Public Schools provide all students four full years of instruction in core subjects, smaller class sizes and culturally responsive curricula.

Rhoda Nkrumah, a senior at Garfield High School, was also among the organizers of the rally. Nkrumah said she moved to Seattle from Ohio before starting high school with hopes for a better educational experience.

“I live in this community; I live in Rainier Beach,” Nkrumah said. “I see myself in the students at Rainier Beach. And I wish that when I was back in Cincinnati, I had somebody to fight for me.”

Students have also urged the district to expedite its plans to construct a new Rainier Beach school building, which is currently expected to be finished by 2025.

Seattle Public Schools uses a system known as weighted staffing standards to apportion school funding. These guidelines determine the budget a school receives and are dictated by both enrollment numbers and student characteristics, such as socioeconomic background or need for special education services. Once a school receives its budget, administrators decide how to best meet their school’s needs.

Moreover, SPS triages schools based on the number of students belonging to certain demographic groups, such as English-language learners and children living in low-income households. The district considers Rainier Beach to have high equity needs; about 81% of students at Rainier Beach come from low-income homes, and 15% are experiencing homelessness. Additionally, 25% receive English-language learner services.

Once a school’s needs are assessed, the district issues a budget in the form of staff and the pay they require. Secondary funding sources like grants and money raised by parent-teacher organizations go toward filling funding gaps. This year, Rainier Beach is operating on a budget of about $8.4 million, which equates to less than 1% of the district’s overall budget of approximately $1.4 billion.

For the past several years, district officials have underestimated enrollment at Rainier Beach. SPS projected that 671 students would enroll at Rainier Beach during the 2018-19 year, but 740 actually walked through its doors.

Miller said this pattern, in part, has left the school without the dollars needed to serve the number of students who actually enroll. Rainier Beach lacks the same community-based funding that other schools — especially those in the north end of the city — often lean on to fill gaps in district-provided funding.

“These years where funding issues come up, we just really don’t have the [parent-teacher association] or private funding, so we have to cut,” Miller said. “It’s not ideal but it's what we decided to do. When you make cuts, you make those decisions together as a staff.”

Several SPS librarians felt the effects of a districtwide budgeting pinch last spring, as they faced seemingly imminent cuts resulting from a projected $39.7 million shortfall for the 2019-20 year. But the positions were ultimately restored after state lawmakers passed legislation easing restrictions on the district's levy-collecting authority. SPS officials expect that the district's revenue will increase by $16 million starting in 2020.

For Rainier Beach, a federal School Improvement Grant had plugged budget holes in prior years. But the grant expired before the start of the new school year and before dollars from the district’s recently renewed operations levy kick in.

When it comes to appraising education funding, per-pupil expenditures are often looked to as a key metric. Data from the state Office of Superintendent of Public Instruction indicate that spending amounted to approximately $15,424 per student at Rainier Beach during the 2017-18 year — nearly 19% over the statewide per-pupil figure.

Miller argues that these calculations, which are made separately from the actual funding allocation process, have misrepresented the amount of money actually provided to Rainier Beach over the years. This has made it easier, he said, for the district to overlook concerns about funding at Rainier Beach.

The largest factor that goes into estimating per-pupil spending calculations is teacher pay. Until recently, these these expenditures were calculated based on a district's average salary requirements. However, recent provisions made to the federal Every Student Succeeds Act now require states to use actual teacher salaries, in an effort to increase transparency in school funding reporting.

In Seattle, an educator with 11 years of experience was the prototype. To get that number, the sum of teacher pay, federal funding, state money and local dollars was divided by a school’s total enrollment.

However, teachers at Rainier Beach have an average of just seven years in teaching under their belts. At Roosevelt High School, by contrast, teachers average nearly 16 years of experience. As a result, both schools incurred much different costs in reality than they had in district estimates, which led to the overstating of how much money either school actually received, Miller contends.

“What this effectively means — and what per-student spending doesn't capture — is that a school like Rainier Beach is effectively subsidizing a school like Roosevelt since both schools are recorded as paying the district average salary for one [full-time employee], regardless of the actual cost,” he said.

A 2015 study published in the Journal of Rural and Community Development cites evidence that per pupil spending "has been found to be a weak determinant of educational achievement beginning with the so-called ‘Coleman Report,’ ” federally commissioned research aimed at evaluating inequities in public education following the enactment of the Civil Rights Act of 1964.

Also at play with Rainier Beach’s funding predicament is the school’s International Baccalaureate program. The academically intensive program launched in 2013 as part of an effort to boost graduation and college attendance rates.

Some have suggested cutting the extra period, but Miller said that it provides a safety net for students who may need to make up credits to meet state graduation requirements.

He went on to say that although Rainier Beach is struggling to secure the resources it needs, student learning outcomes are improving. The four-year graduation rate has increased by more than 12% since 2014; at 89%, it's higher than the districtwide rate.

“We're always in this kind of balance about making sure people understand that the sky isn't falling,” Miller said. “We're still doing a lot of great work despite this. And one way or another, we're going to fix this.”

The Rainier Beach staff plans to launch a fundraiser in October as part of an effort to reinstate the teaching positions that were cut.

The district's overall enrollment is about 900 students above the 51,258 that officials last spring projected would enroll, JoLynn Berge, SPS's chief financial officer, said during a Sept. 18 school board meeting.

"Similar to other districts around us, we budgeted to be down," she said, referencing enrollment projections for the Renton and Highline public school districts.

Berge said that SPS plans to add 47 full-time equivalent staff positions across the district after an official enrollment count is made in October. Rainier Beach is currently 33 students over enrollment projections and is among the schools to be allocated additional staff.

This story has been updated to clarify that 2017-18 per-pupil spending data reported by OSPI reflects real teacher salaries.