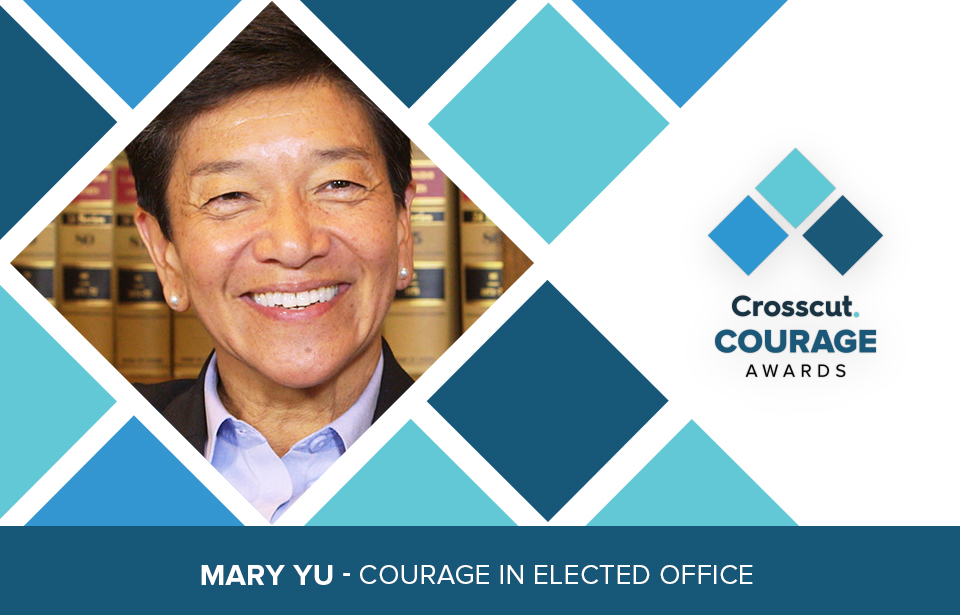 Growing up in a working-class family on the south side of Chicago, Mary Yu never expected to go to college. Yu’s Mexican mother, who spent much of her early life picking strawberries and asparagus, and her Chinese father, who worked in a factory, held modest wishes for their two children. They hoped their daughter would find success with a secretarial job.

“My mom would always say she didn’t want our hands to look like hers,” Yu said.

In high school, one of Yu's teachers asked if she had considered college. It was a question that would lead Yu to undergraduate and graduate degrees in theology, a 10-year career in social justice, a law degree from University of Notre Dame, a judgeship with King County Superior Court and a seat on the Washington state Supreme Court, where she serves today.

As a lesbian woman of color, Yu found herself a trailblazer on many fronts. She’s the state’s first openly gay justice, the first Asian American justice and the first Latina justice. She even holds the honor of having officiated the first same-sex marriage in Washington State in 2012.

“I see myself as a ‘first’ because of opportunity, timing and other leaders willing to give me a chance,” Yu said. “I don’t think I am a superhero, but I do want to make sure others can look at me and say, ‘I have a shot at the Washington state Supreme Court, too.’”

Yu is one of six honorees being recognized at Crosscut’s Courage Awards breakfast in Seattle Oct. 17. Seats can be purchased here.

Yu is known as a thoughtful justice who brings her life experience and perspective to the bench. A decision she’s particularly proud of is Demetrio v. Sakuma Brothers Farms, a 2015 case that saw the court unanimously affirm that farmworkers have the right to paid rest breaks. Yu wrote the majority opinion. As the daughter of a farm worker, the case hit home.

Yu isn’t always in the majority. She wrote the dissent on Washington v. Samalia, a case involving the search of a cell phone following a traffic stop. Yu felt – and feels – strongly that a warrant should always be required for cell phone searches because of the private data they hold.

“I was not in the majority,” Yu said, “but (my opinion) was picked up by lots of states as the better view. I know we will come back to this issue.”

Justice Charles Johnson has worked with Yu for 20 years, first as a fellow member of the Supreme Court’s Minority and Justice Commission and most recently as a fellow justice. He’s long been impressed with Yu’s fairness.

“Justice Yu knows each case inside and out and treats each decision with equal importance,” Johnson said. “She possesses a sharp and inquisitive mind.”

A role model and leader

Yu is a leader and influencer outside the courtroom as well. For the past 15 years, she has served as the judge for Seattle Girls School’s mock trials. The trials are a big part of the middle school girls’ civics education. Yu, along with King County Superior Court Judge Patrick Oishi, spends one evening a year playing the presiding judge for the girls’ cases, weighing in on arguments and deciding the guilt or innocence of the defendants.

“There’s nothing more magical than seeing girls so young have such confidence,” Yu said.

She sticks around after the trials to discuss the decisions, answer questions and dry the tears of the girls on the losing side. Yu wouldn’t miss it for the world.

Middle school “is an important time for girls in their development of confidence,” Yu said. “This is the time when they’re developing the habit of either sitting back and deferring or standing up and doing things for themselves. It’s important for them to see a minority female judge.”

Yu knows her groundbreaking firsts have put her under the proverbial microscope. She sees this as an opportunity.

“I believe there is a level of scrutiny that keeps me working very hard,” Yu said. “I’m always worried about not messing this up for others.”

It’s unlikely Yu’s admirers – from the budding attorneys she mentors at Seattle Girls School to her long-time colleagues – would view Yu’s efforts as anything less than commendable.

“Her life is measured by how much others succeed and whether she has done all she can with the time she has to improve the lives and opportunities for others,” Johnson said. “I admire those qualities and enjoy working with and supporting people who live by those ideals.”