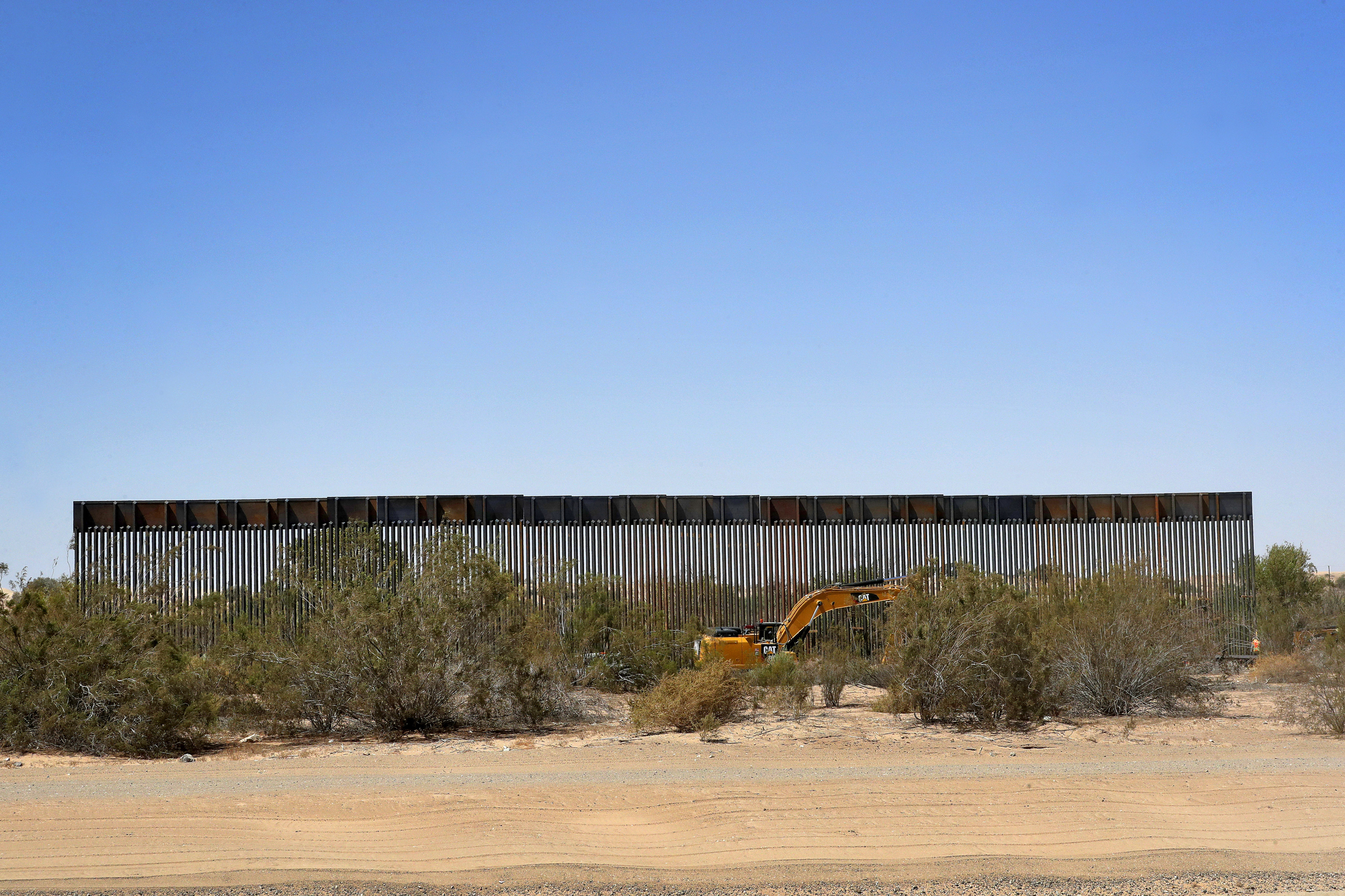 Government contractors erect a section of the Pentagon-funded border wall along the Colorado River, Sept. 10, 2019, in Yuma, Arizona. The 30-foot-high wall replaces a 5-mile section of Normandy barrier and post-n-beam fencing along the the international border that separates Mexico and the United States. Construction began as federal officials revealed a list of Defense Department projects to be cut to pay for President Donald Trump's wall. (Photo by Matt York/AP)

When President Donald Trump launched his presidential campaign in 2015, he made a promise to build a “great wall” along the U.S.-Mexico border. He has been fighting to keep that campaign promise ever since, even as Congress has refused to pay for the wall's construction.

So earlier this year, Trump declared a national emergency, enabling him to divert money from other projects for the wall. The White House pulled $3.6 billion from a Defense Department construction budget, money slated to pay for 127 congressionally approved projects, including an $89 million submarine pier and maintenance facility at Naval Base Kitsap in Washington state.

Now, state Attorney General Bob Ferguson, in what is his office’s 48th lawsuit against the Trump administration, is suing the White House, hoping to guarantee that Washington state keeps the funding dedicated to the naval base's Bangor Pier.

“When is the Trump administration going to stop stealing money from Washington state?” Gov. Jay Inslee asked at a press conference announcing the lawsuit, which was filed Thursday in U.S. District Court for the Western District of Washington.

“The only real emergency here is Donald Trump’s poll numbers continuing to decline,” said Inslee, who recently dropped out of the Democratic presidential primary contest. “What he is doing is reducing national security."

"It is deeply disturbing to see the administration unilaterally raid funds from these vital projects in Washington and across the country to fund an ineffective, completely unnecessary border wall," said Sens. Patty Murray and Maria Cantwell, both Democrats from Washington, along with U.S. Rep. Derek Kilmer, D-Gig Harbor, in a joint statement earlier this month. "Our men and women in uniform deserve better.”

The Bangor Pier and Maintenance Facility project includes a pier for two 250-foot blocking vessels, a boat shop capable of supporting 30 vessels and a small-craft fueling station and storage tank.

The blocking vessels, which "escort and provide security for submarines between the base and dive points in the Strait of Juan de Fuca, have no dedicated pier space, forcing them to operate in a 'nomadic state,”" a press release announcing the lawsuit explained. According to the Department of Defense, if Bangor Pier is not constructed as planned, sailors could be subjected to “extensive berth shifts and unnecessary days spent away from homeport.”

Washington is not the first to sue over the Trump administration’s plan to divert military funding to border wall construction. Several lawsuits were filed earlier this year, Ferguson said, including one by 20 states. Ferguson said he decided to file Thursday’s lawsuit only after the Department of Defense confirmed a project here would be affected.

“The National Emergencies Act gives the president flexibility to access certain powers in extraordinary circumstances where immediate action is required but there is no time for Congress to act,” they said in the lawsuit. “It does not give the president authority to seize funds Congress refuses to appropriate.”

In emergencies, attorneys for the state argue, the U.S. Constitution allows for the undertaking only of military construction projects necessary to support armed forces — not border walls.

Ferguson also pointed out that many of those who have been arriving at the border are coming in through ports of entry, not between them, making a border wall futile.

“President Trump’s misuse of his presidential emergency powers to accomplish an ideological political goal is an egregious abuse of power that should concern all Americans,” Ferguson said, “regardless of how you feel about Donald Trump or immigration.”