'We should be able to have a normal childhood': Seattle's young climate activists on why they strike

As thousands take to the streets worldwide, Seattle youth reflect on being arrested, what they've lost and how they can save what's left. 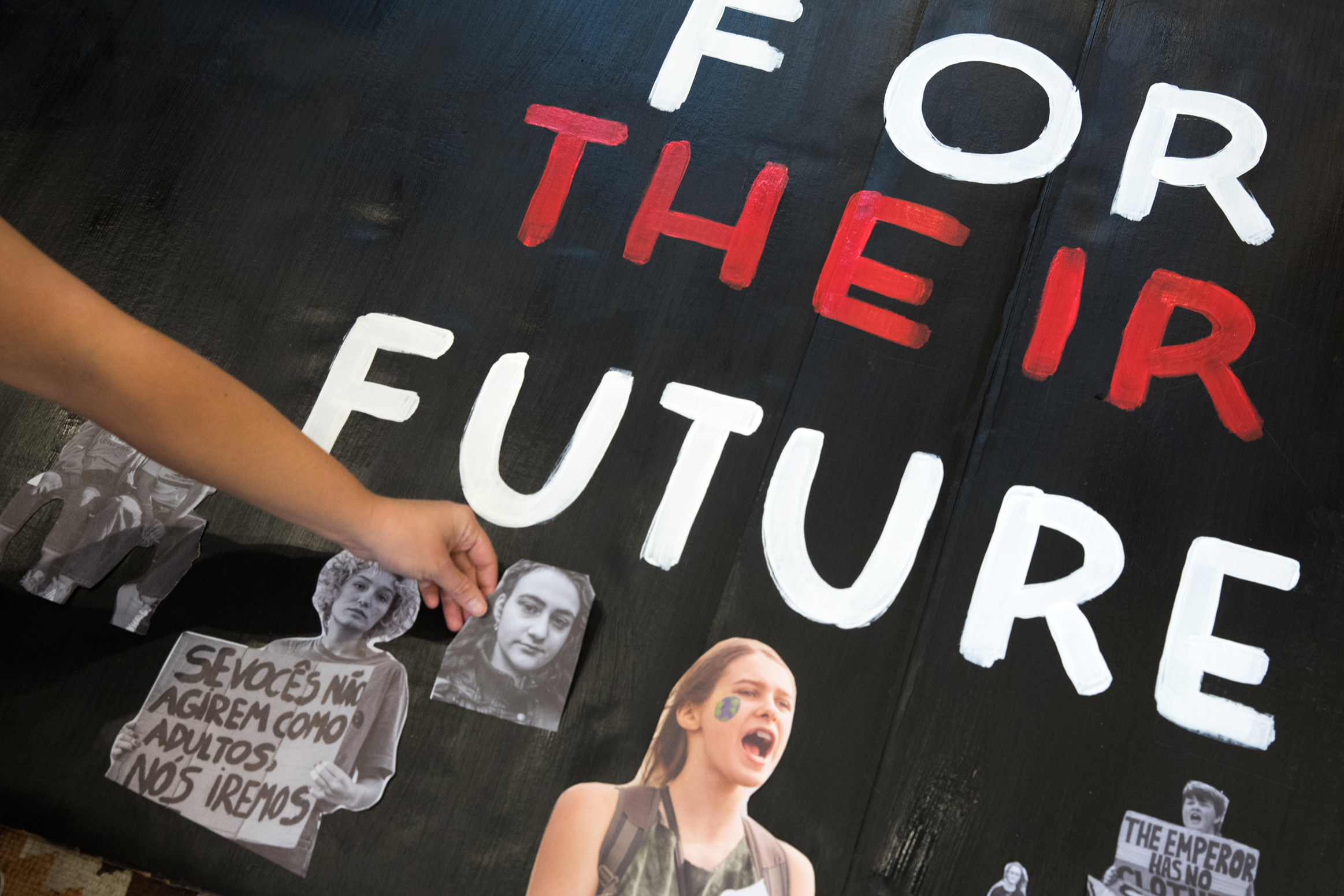 In August, the story of Zoe Schurman’s arrest traveled quickly. On Twitter, fellow climate activists and concerned Seattleites alike circulated a video of her in tears, getting handcuffed by police outside Seattle City Hall. The arrest of a protestor might not seem noteworthy, but it’s easy to see why this one gained traction: Schurman is 13 years old. She used spray paint (labeled as “chalk” on its container) to write the words “Strike For Our Futures!” along the building’s stairway. She says she quickly realized that it was permanent, but before she could attempt to remove it, she was arrested.

“They put me in a car,” Schurman says. “I didn’t really know what was going to happen, but they drove me to the precinct, and I was in a holding cell, actually, with my handcuffs still on. Then my parents picked me up.”

When contacted for comment, a Seattle Police Department spokesperson says Schurman's arrest was a routine action in response to vandalism.

Schurman had been protesting outside City Hall for months alongside other young climate activists as part of the worldwide “Fridays for Future” movement started by 16-year-old climate activist Greta Thunberg, who began her protest in front of the Swedish national legislature last year.

Schurman wanted to act, too. She says she first became interested in climate change when she was 9, helping out in other climate-related protests by marching and organizing. But participating in Fridays for Future weekly protests and helping to organize today’s global climate strike as a youth leader with activist organization Climate Action Families has been a new experience for her.

Even so, she didn’t expect the attention. She hadn’t planned an inflammatory act of protest — she believed her message could be erased. Schurman says the attention she has received from both the incident itself and from being a young activist thrust into a spotlight sometimes feels strange.

“For me, it’s still kind of weird, like, why am I getting reporters? Why are people paying attention to me?” Schurman says. “But I’ve started to get a little more used to the idea that everybody can make a difference.”

In many ways, climate activism has taken over the lives of Schurman and her activist peers, who are often from middle or high schools all around Seattle. A core group of them regularly protests with Fridays for Future at City Hall. For 15-year-old Kimaya Mahajan, who was protesting with Schurman but left before the arrest, it’s taken up most of her free time the past few months. She helped organize today’s protest and spoke during a rally at Cal Anderson Park.

“It’s been kind of insane, honestly,” Mahajan says. “When I first took on the role, I wasn’t 100% sure what I was signing up for. It was kind of like going to school, just at night.” After all, it’s taken months for them to organize today’s protest, and she says her schedule became more packed as today’s date approached.

Mahajan says that witnessing what happened to Schurman made her realize “the danger we’re putting ourselves in every time we go out.”

Caroline Heege, a fellow 13-year-old activist with Seattle’s Fridays for Future, says that the work she and others do has made her childhood a little different than what she’d think of as normal.

“Sometimes I’ll be going to something and my friends are like, why are you going to that again?” Heege says. “Or going to an event or doing interviews, it doesn’t seem normal for a kid to be doing.”

They and other young activists in Seattle have spent their after-school hours working to move adults to action on climate change. They are helping organize and participate in today’s global climate strike. Both Schurman and Mahajan spoke at this morning’s Cal Anderson Park rally before helping lead protesters on their march.

At the march, Schurman’s mother, Grace Stahre, a program director with Climate Action Families, says she’s constantly awed by her daughter. Just the day before the march, Stahre says Schurman had gone to school, written her speech, joined a press conference with Seattle City Councilmember Kshama Sawant and attended a school board meeting to request excused student absences for the rally.

“I just don’t know too many adults with that sort of motivation,” Stahre says.

While youth activists can’t always provide the scientific or statistical answers to the climate crisis, Stahre says, “it’s not difficult to imagine a world where they want to live in.” 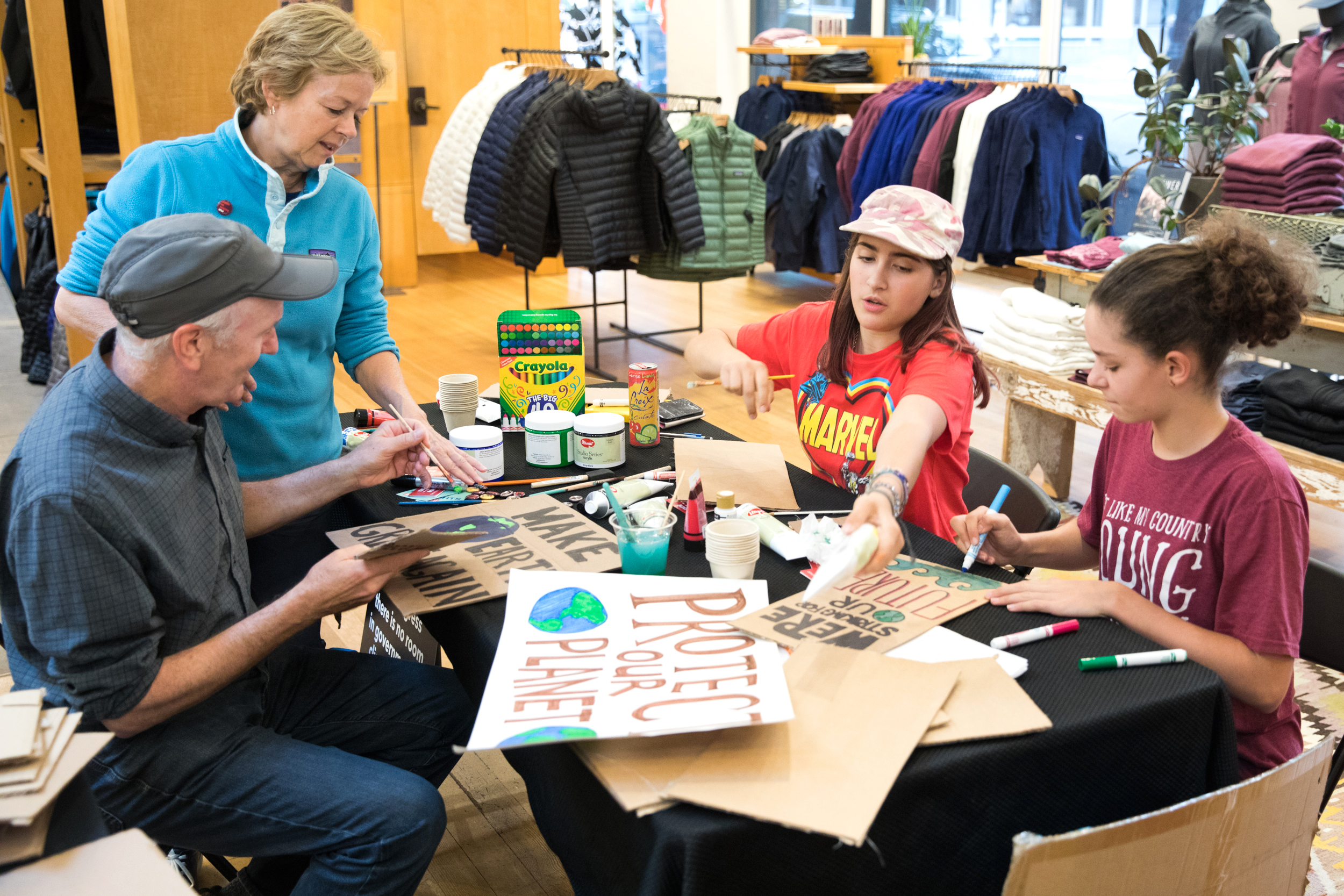 Clockwise from left, Clyde McQueen and wife, Colleen, help make signs for Friday's climate strike protest in Seattle with Zoe Schurman and Caroline Heege during an event at the Patagonia store, Sept. 20, 2019.

Clockwise from left, Clyde McQueen and wife, Colleen, help make signs for Friday's climate strike protest in Seattle with Zoe Schurman and Caroline Heege during an event at the Patagonia store, Sept. 20, 2019.

“And it’s my responsibility to be accountable to her needs,” she adds.

The past few years have been fast-paced for young climate activists in Washington and around the world: In 2017, 17-year-old Seattle-based activist Jamie Margolin organized other young climate activists to create Zero Hour, the youth-oriented group that held a nationwide march for climate action last year. That same year, Thunberg began her protest. The two testified before Congress with other young activists Wednesday, expressing the urgency of the climate crisis.

“The reality is my generation has been committed to a planet that is collapsing,” Margolin said during her testimony. “The fact that you are staring at a panel of young people testifying before you today, pleading for a livable Earth, should not fill you with pride. It should fill you with shame. Youth climate activism should not have to exist.”

The night before the strike, Schurman and Heege spent the evening at the Patagonia store in the Belltown neighborhood, creating signs with other activists ahead of the march. While painting ocean waves onto her own sign — one that reads, “The seas are rising and so are we” — Schurman echoed Margolin’s sentiments.

“We should be able to have a normal childhood — not have to give it up for standing up for our futures,” she says.

Heege, painting her own sign beside Schurman, nodded along. “We should be in a world where the adults have not gotten us into this situation and even if they did, they’re taking care of it,” she says.

But that’s not their reality. The reality, they say, is that young climate activists like them are the face of the movement; for now, they must continue to power it.