City council candidates are making big promises on homelessness. Can they deliver?

Voters care more about homelessness than any other issue. But some question whether the Seattle City Council alone can solve it. 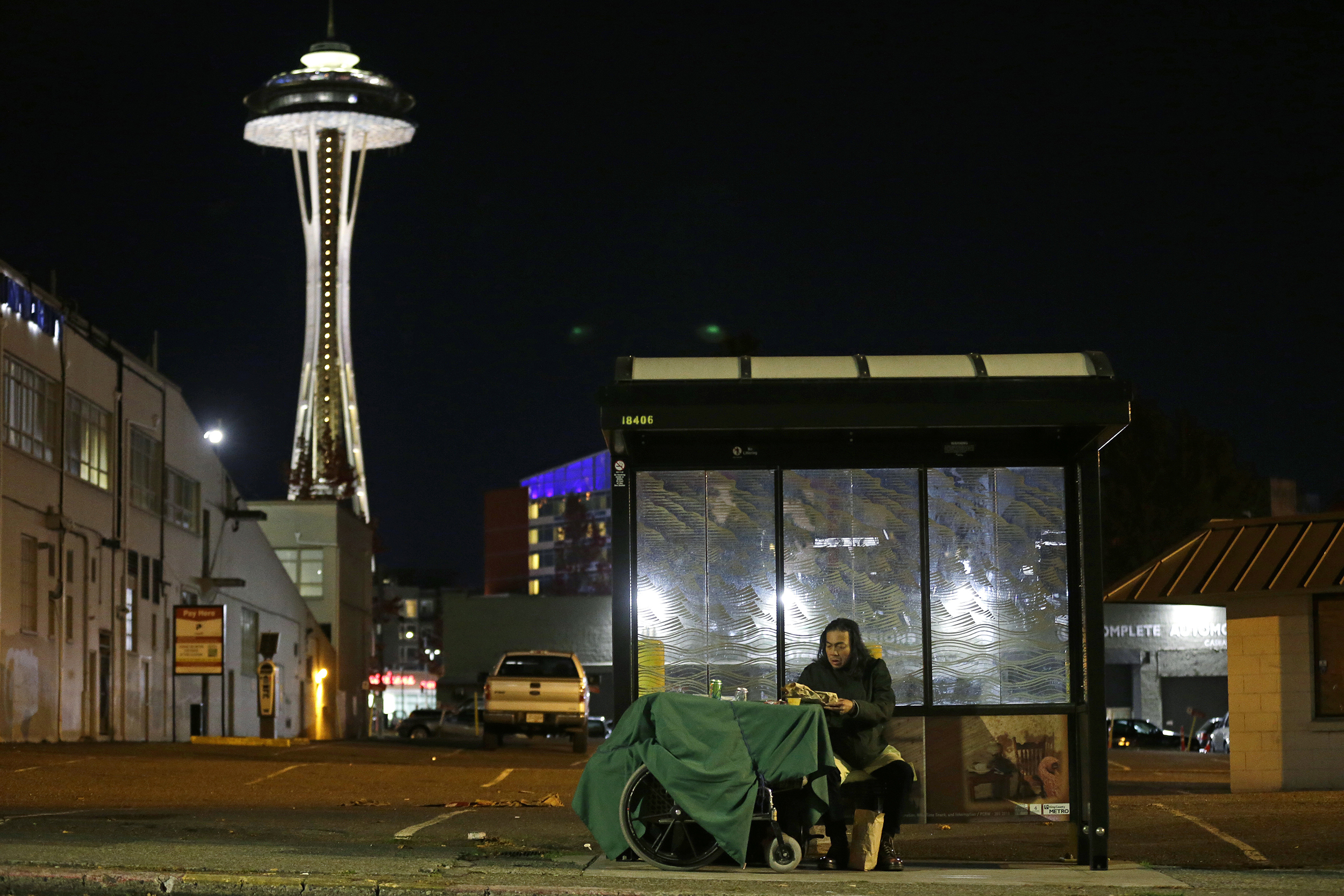 Dave Chung, who says he has been homeless for five years on the streets of California and Washington state, eats a meal before bedding down in a bus shelter in view of the Space Needle on Oct. 30, 2017. (Ted S. Warren/AP)

This much we know: Seattle voters right now care more about homelessness than any other issue. They’re also largely dissatisfied with what’s perceived as a lack of progress at finding solutions on the part of the city in general, and the Seattle City Council in particular.

For the 14 candidates vying for seven seats in the Nov. 5 city council election, that means every interview, forum and questionnaire has included questions on how they will do better. As a result, behind each would-be representative is a long trail of pledges that, when added up, are intended to provide voters confidence that the candidate's election would constitute an improvement from the status quo.

But among those working in the world of homelessness every day, there’s skepticism that, when the new council takes office Jan. 1, the slate of those elected will necessarily represent the dawn of a new era.

“I think the dynamics are such that the Seattle City Council, however it’s configured or whatever its membership is, will not be able to fundamentally change a lot except on the margins,” said Daniel Malone, executive director of the Downtown Emergency Services Center. “There’s plenty of important things they can do. They can make investments in current or new activities that will provide relief. But the solution to homelessness is much larger than the council, I think, is going to be able to effect.”

What emerges in interviews with Malone and others who have worked on the issue for years is a general agreement about what the new council ought to do: commit to addressing the problem regionally; invest significantly more time and money in solutions that work, including permanent supportive housing and diversion; distinguish between different subpopulations of people experiencing homelessness and identify the best intervention for each; and be transparent about the results.

What’s also clear is a belief that those elected may quickly find the problem is more complicated than what’s conveyed on the campaign trail.

“It’s so easy to blame council and blame the mayor and blame every company in town, but the reality is that we have a federal safety net that’s not keeping up with demand and at a local level we’re not doing everything we can to keep the cost of housing down and shore up what we can in terms of safety net resources for low-income individuals,” said Lauren McGowan, senior director of ending homelessness and poverty at United Way of King County. “My hope is that while some of [the candidates’] expectations may not be exactly what they thought coming in — it may not be as easy to change one policy and change the crisis — what they can do is to begin to share what the real needs are and what the real solutions are.”

King County’s annual point-in-time count found over 11,000 people struggling with homelessness on one night earlier this year. That’s a dip from the year before, but nevertheless a staggering number.

Seattle, for its part, is expected to top $100 million in spending on homelessness next year and has continued to add shelter beds. But even as people exit homelessness, new people continue to enter.

On a number of issues, the candidates largely agree. There is broad consensus that Seattle ought not to silo itself when addressing the problem. Distinctions exist in how that collaboration should be achieved — ranging from full-throated support of a new county and city authority to public-private partnerships — but few argue the city can make progress without the help of surrounding communities.

Candidates also all support permanent supportive housing as a solution for people with disabilities, substance use disorder or who have been homeless for a long time.

Divides emerge, however, when talking about how to pay for this progress.

Especially in the long shadow cast by the repealed “head tax,” revenue questions have been sensitive. Most candidates have said it’s likely more money is needed, and they support reforming the state’s tax system.

Some candidates, including Tammy Morales, Shaun Scott and Kshama Sawant, answer “yes” immediately when asked whether more money is needed. Scott and Morales have proposed taxes on things such as second homes, mansion sales, high salaries and large inheritances. Incumbent Councilmember Sawant continues to argue for a return to the head tax, a per-employee tax on high-grossing businesses.

Other candidates, however, qualify their “yes,” saying funding should be tied to a close combing of the city budget or to a collaboration with other cities.

“It’s likely we do need more resources…. But we also need to get our fiscal house in order,” said District 4 candidate Alex Pederson in a recent forum. “We’re seeing spending go up, but we’re not seeing the results we should, so audits should just be part of the fiscal responsibility.”

“We are spending so much money on the administrative side of this homeless problem to these homeless service providers that the money is not getting to the people who need that help and that’s what we need to fix,” said District 1 candidate Phillip Tavel.

Few disagree that it’s worth looking for efficiencies in the budget. But Malone doubts that will bear significant fruits. “I am absolutely convinced that any gains you get from that is on the margins. You could take the finest nit comb for lice and get only a little more for that,” he said.

Seattle University law professor Sara Rankin said she “vehemently believes” the solutions need more funding. But she allowed that the city could do better when it comes to being transparent. “Until we have greater transparency and greater precision when we’re talking about whatever the problems are and we’re showing whatever the solutions are … then we can’t really complain that the general public doesn’t trust us,” she said.

Putnam suggested that the proposed new agency combining the homelessness budgets of King County and Seattle may begin absorbing some of the scrutiny that’s been directed toward the city council.

“I think the question of what influence council members will have will change if the regional homelessness authority forms in the way that was proposed by the [King County] executive and the mayor,” said Putnam. “In that scenario there’s much less influence and less responsibility for council members.”

Malone said that, when the new council takes its seat, he’ll be happy to have the members come for a tour and a conversation. Some candidates already have.

“I’m optimistic [the new council] is going to identify what really needs to be done,” he said. “Separate the wheat from the chaff and not get too hung up on small-scale, trendy little innovations, but really focus on the meat and potatoes of how much housing is really needed here and how much will it cost to really produce that. If it does that in a well informed straightforward kind of way, then we’ll have some progress.”