The ad, for District 3 city council candidate Egan Orion, appears on the cover of the current issue of the alternative newspaper. 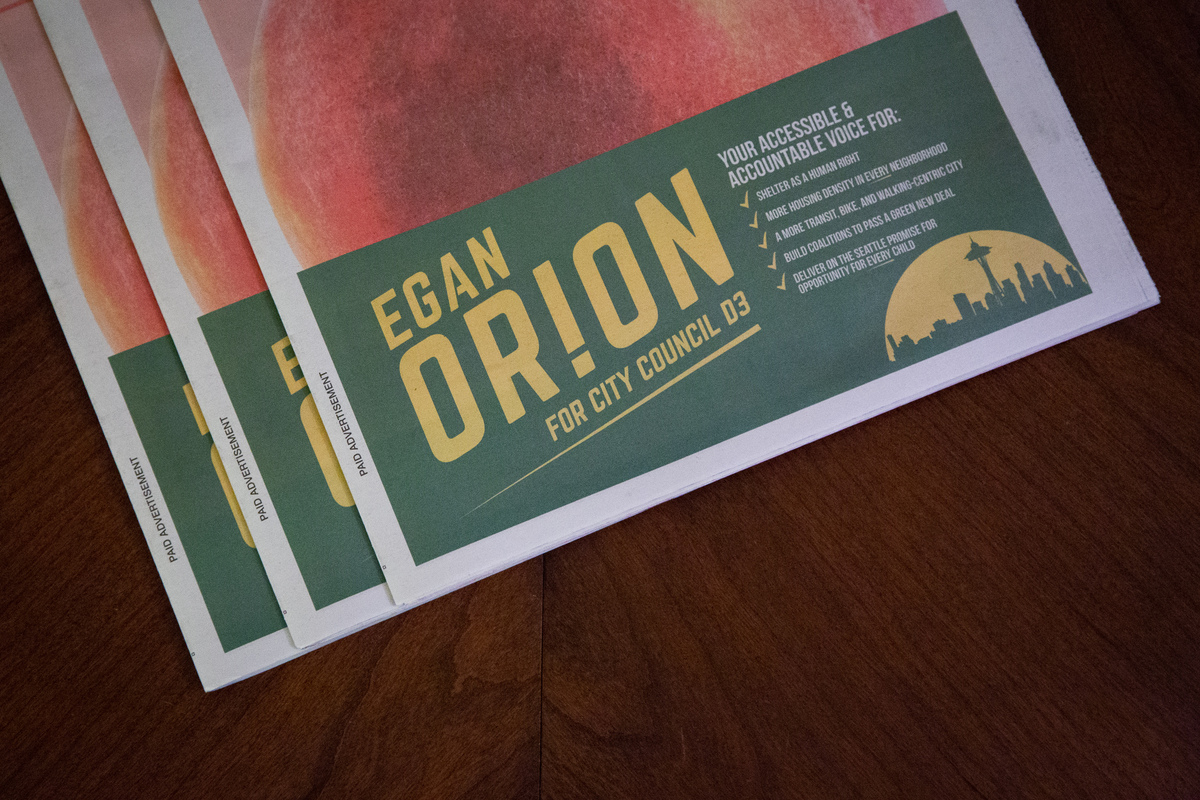 Egan Orion's ad as it appears on The Stranger's endorsements issue. (Jen Dev/Crosscut)

A staff member of The Stranger newspaper has lodged a complaint with the state Public Disclosure Commission against Egan Orion, a candidate for Seattle City Council, over a political advertisement that ran on the outside of the employee’s own paper.

The complaint, filed Wednesday by The Stranger’s digital editor Chase Burns — whose legal name is Chase Broderick — alleges that Orion’s advertisement on the front of his paper does not properly disclose who paid for its placement.

Burns cited the commission’s instructions for candidates, which says sponsors of political advertisements must disclose who paid for the ad on the first page. In a follow up email, he also cited RCW 42.17A.320 of the Washington state code.

Orion’s ad struck a nerve Wednesday, when it appeared on the front of The Stranger’s political endorsement issue, one of the biggest of the year for the long-running semiweekly alternative newspaper. Inside the issue, The Stranger endorsed Orion’s opponent, two-term Councilmember Kshama Sawant, in the race to represent District 3 on the Seattle City Council. The Stranger has repeatedly supported Sawant in its endorsements and was highly unlikely to ever endorse Orion.

Backing from The Stranger is widely viewed as one of the most valuable endorsements in the city, and possibly the most valuable. It is credited with tipping races in favor of more left-leaning candidates, including Sawant and former Mayor Mike McGinn.

But it’s Orion’s name that will greet readers who grab a copy of The Stranger over the next two weeks. Orion’s  ad was printed on what an editor’s note described as the paper’s “outer cover,” made to look like the paper’s actual cover, but with Orion’s green and yellow banner across the bottom. A disclosure that the front was a “paid advertisement” was printed along the paper’s spine on the front, but did not include information on who paid for it. The political ad continued onto the back of the front page, where more details were given about Orion’s campaign, as well as the disclosure that it was paid for by Egan for Seattle. Another, near identical cover was on what could be considered the third page, but without Orion’s ad.

“This cover advertisement is misleading,” wrote Burns, pointing to the layout of the advertisement, which places “Egan Orion for City Council D3” right beneath the phrase “You better vote!” While the paper does include a “paid advertisement” message next to the ad, “nowhere on the cover does it list who sponsored the ad banner at the bottom of the cover,” wrote Burns.

In an email, Orion’s campaign manager, Olga Laskin, said of the complaint, “The Stranger ad clearly states paid advertisement on the front flap and the disclaimer is printed right there on the ad. If this is how Sawant supporters want to spend their time, that's fine, but we are spending it talking to District 3 voters about accessible and accountable leadership.”

As digital editor, Burns is a member of the paper’s editorial staff, which means he’s removed from any decisions regarding advertising, he said in his complaint. “I am unaware of the details of this ad sale and was not involved in any part of its sale or production,” he wrote.

In a follow-up email, Burns said he filed the complaint after the editorial department saw the advertisement. “I believe it's important to report violations as we see them,” he said,

He added, “Obviously, the complaint puts me in a strange position, but The Stranger's advertising and editorial departments are separate. We often report on people and groups who purchase advertisements with The Stranger (I believe Egan has been running ads on our website throughout his campaign). I expect my PDC complaint will be viewed as an extension of the paper's commitment to separating sales and reporting.”

A request for comment has been sent to Stranger management.