The 'greatest bird guide ever' on race, survival, and birding while Black

Meet Drew Lanham, the professor and conservation activist behind the viral video "Rules for the Black Birdwatcher." 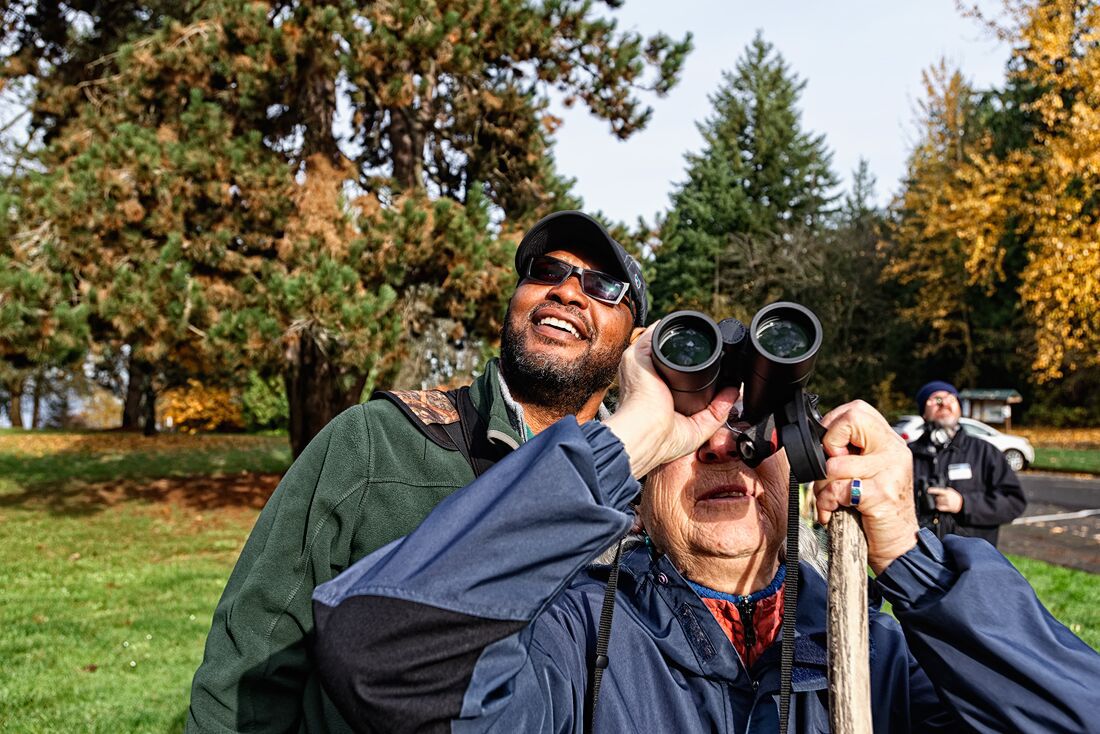 Drew Lanham, left, is the author of ‘The Home Place: Memoirs of a Colored Man's Love Affair With Nature’ and a thinker who considers the social, political and ecological implications of race. (Courtesy Glenn Nelson)

Drew Lanham is a different bird. And he’s known that to be the case since, back in the day in Edgefield, South Carolina, he leapt off buildings and trees with cardboard wings, umbrellas and parachutes made of garbage bags. One time he broke his collarbone after jumping off the porch of his childhood home.

Lanham never did learn how to fly, but he’s maintained his love affair with the creatures he tried to emulate — birds.

Do yourself a favor and live vicariously through Lanham when he delivers the Doug Walker Lecture Wednesday night for the University of Washington’s Earthlab.

The late Doug Walker, a seminal national force in conservation’s diversity movement, was a mentor of mine. His spirit, I believe, put me together with Lanham, whom I consider a blood brother and kindred spirt. We’ve had several long, profound conversations about race and nature, including one over the phone in anticipation of this Seattle visit.

“[Birding] is how I find bits of bliss in the midst of the struggle,” Lanham says. “I don't expect the struggles to disappear. I don't expect America to suddenly become better because one man disappears eventually from office. The bandages are off this wound that never healed.

“I want people to look at birds and admire them, adore them. But then I want them to take their binoculars down and look around and understand why things are as they are. And then ask what they’ve done to either make things better or make them worse.”

I first met the writer, poet and Clemson University professor of wildlife ecology during a bird-watching session in Seattle’s Seward Park. Back then, he had gained national renown for his hilarious riff on the stigmatized experience of the African American birder, “9 Rules of the Black Birdwatcher,” which first appeared in Orion magazine and later went viral as a video produced by BirdNote, a public radio series about birds that originates in Seattle. Lanham is the greatest bird guide I’ve ever encountered — more knowledgeable than locals about local species, a master of avian calls and an entrancing storyteller.

Since then, Lanham has published his provocative and award-winning memoir, The Home Place: Memoirs of a Colored Man’s Love Affair With Nature (Milkweed). He’s also evolved, as a thinker and commentator, past his experience as a rare bird(er) — birdwatching in this country is 93% white, according to the U.S. Fish and Wildlife Service — into the social, political and even ecological implications of race.

Although he was raised in the South, Lanham says that in the classroom he never encountered the history of slavery, Reconstruction or Jim Crow. He was first forced to consider how race impacted his growing interest in a nature-based career when working in his early 20s outside Salem, S.C. The place was considered a sundown town, where Blacks were expected to vacate by sunset.

Lanham recalls that experience during a recent conversation with a white man from Texas. Lanham likes to talk about range maps for humans, linking the concept of showing geographic distribution of birds to the realities of race in the U.S. — where people of color like him can and cannot be. Lanham considered his new acquaintance’s home range to be a no-fly zone for him.

“If the Lord God Bird itself was sighted in East Texas, I'm going to have to think twice to three times before I go there because East Texas historically is not a friendly place for Black folk,” Lanham told the Texan.

East Texas has its own notorious sundown town, Vidor, which was widely reported to have displayed a sign with an ancient racial epithet, followed by the warning, “don’t let the sun set on your black ass!”

The Lone Star native replied, “Well, you're practicing exactly what you preach against. You’re being racist because you're judging all of us in East Texas by what one or two bad people did.”

Lanham tells me: “A lot of white folks don’t understand the level of care and vigilance that it takes to survive. We’ve become so adept at it, so skilled at it, that it seems as though we're just moving through the world without a care maybe. But it's this constant code switching. That’s an adaptation that I have.

“It always comes back to basic ecology for me,” Lanham adds. “Culturally, we're prey species in a landscape of predators. And that's not claiming victim status; that's just how it is. Look at the statistics. We're prey, right? Our eyes have not moved to the sides of our heads, but maybe figuratively they have because we're always casing things in a very different way.”

“You're at a heightened sense of awareness, which in some ways is good, but it also keeps you on edge. And we have to work hard to overcome those sorts of things,” he says. “You can never work at full capacity, either at enjoyment or on the job to be done, when you're fearful.”

Lanham has become widely known as an educator and ambassador to nature. Among several leadership positions, he’s on the national board of the Audubon Society. He is a passionate nature photographer. Between his work and his elevated station, he’s all over the country, in the outdoors, where he says he’s “never lonely but often alone.”

In addition to navigating that existence, constantly updating his range maps, Lanham has maintained his home base in the South. I ask him how, in light of all we discussed, he has survived spending most of his time in a place the rest of the country considers the epicenter of racial tension.

“This may sound fatalistic, but I think the whole country is ground zero,” Lanham replies. “[In the South], Black people and white people live with one another in this tension that is built on it being one of the epicenters for the history that still hangs on. But I always have to remind my friends in the Northeast that their large investment and insurance houses were literally making a killing on the subjugation of a people. Then you go out West and maybe the numbers of Black and Brown folks who initially were put upon wasn't great. But then you have to think about the genocide of Native Americans.

“This is home for me. I figure I need to try to make home better before I make any other place better. South Carolina, ecologically, is a wonderfully rich place. But you can't go very far in this place without understanding that a good portion of that ecology was built on the backs of Black folks. I don’t want to leave this place to the designs of the storytellers who would erase us and erase all colors from the landscape and claim it.”

The erasure of nonwhites as justification for enslavement, land seizure or mass incarceration is a deep stain on U.S. history. Such propagandizing is ongoing, morphing into a dominant, modern-day narrative of the outdoors as absent of people of color, who need to be coaxed or invited back. This is the false rendering that Lanham has adopted as his mission to refute. “Well, no, we were always in it,” he says. “We were here. We were always here.”