A hotel workers' union is spending big on one candidate for Seattle City Council. Why him?

In addition to supporting controversial worker protections, Andrew Lewis said he would consider whether a hotel was union or not when making land-use decisions. 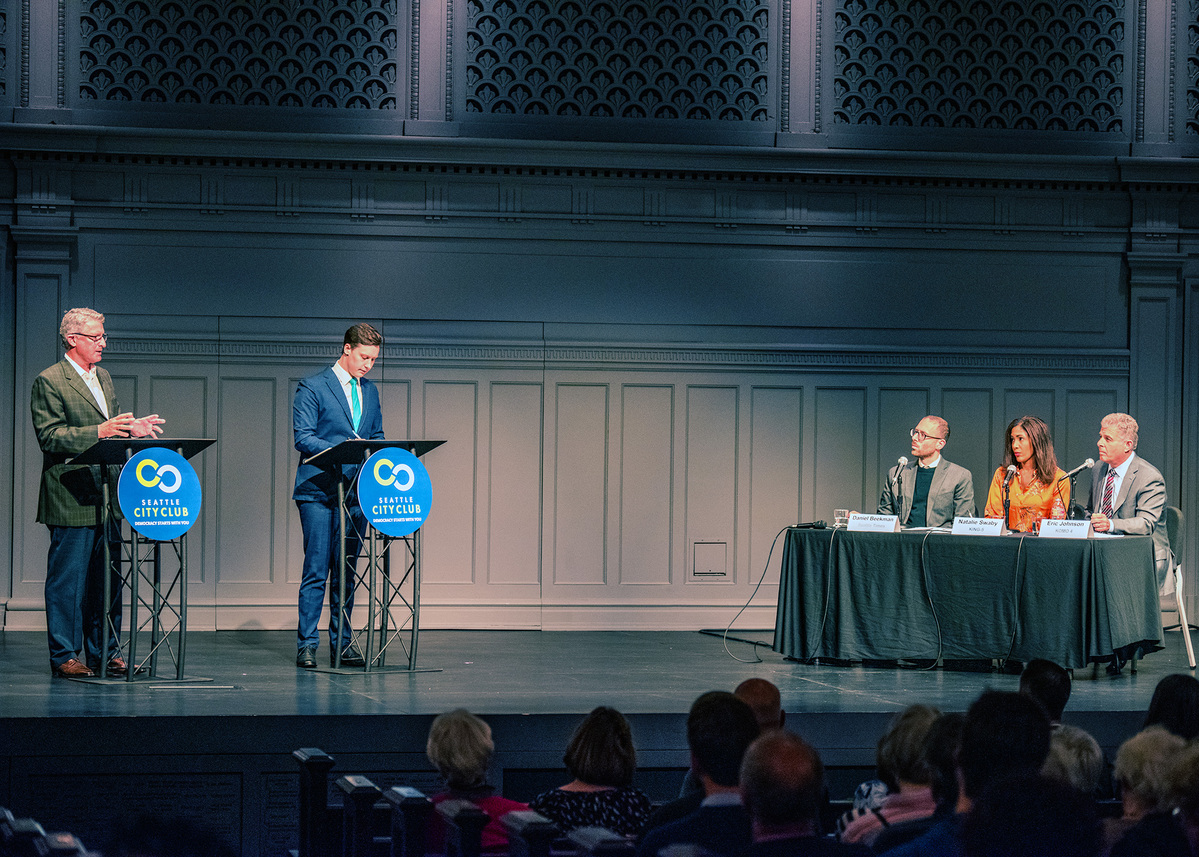 It’s been the year of the political action committee in Seattle’s races for City Council, with large businesses like Amazon, Vulcan and Expedia collectively dropping hundreds of thousands of dollars to be spent on their preferred candidates.

The surprise guest at the PAC table, however, has been a midsized union, Unite Here, which represents workers in hotels and other hospitality businesses. So far, the New York-based union has contributed more than $350,000 to its Seattle committee, outpacing every individual corporation and business association except Amazon. And while the city’s business-friendly PACs have spread their money around to several candidates, Unite Here so far has spent most of its money on behalf of one: Assistant City Attorney Andrew Lewis in District 7.

Unite Here has been a small player in past elections. The local chapter, Local 8, spent $7,550 in 2015 and $5,400 in 2017. But with the enormous support of its national branch, the union suddenly can make a difference in the election. As the corporate PAC spending has favored candidates who oppose a tax on large businesses, the reason for Unite Here’s massive support of Lewis is more of a mystery.

In a statement, Unite Here Local 8’s Secretary Treasurer Stefan Moritz said only, “We support Andrew Lewis to be the next City Council member in District 7 because he understands and is committed to the hardworking housekeepers, cooks, servers, and dishwashers having a future in our city.” Moritz did not respond to repeated requests for more specifics.

It’s unclear, then, exactly what earned Lewis the high-dollar endorsement.

Moritz, however, told The Seattle Times in July: “Andrew met with our members. They were impressed and asked the union leadership to support his candidacy.” When both candidates were asked to recount what they said to Unite Here members in meetings — Lewis said he spoke to Unite Here members twice — two specific differences emerge between Lewis and his opponent, former Seattle Police Chief Jim Pugel: one related to permitting, the other related to hotel worker protections.

On permitting, Pugel told Crosscut that Unite Here members asked him, “If a hotel wants to build, could you make permitting of a hotel contingent on them being union?” To that, Pugel said he answered, “I don’t think a council person can say, ‘To build a property you have to be or cannot be union once it’s over’.”

Lewis, however, answered more positively. He said he was asked, “ ‘Would you consider it to be a factor whether a proposed project to be permitted is going to have a union workforce or not?’ I said, ‘Yeah, I think that would be a factor in the permitting process.’ ”

District 7, which includes downtown Seattle and South Lake Union, is home to many of the area’s hotels, and the number is growing. Since 2017, 10 hotels have opened in the district, with a host of others being renovated and remodeled, according to Visit Seattle. Two more are slated to open shortly, in South Lake Union and in the new F5 Networks building downtown. With such a breakneck pace in a single district, linking  project approval to union wishes would greatly benefit Unite Here. Yet it is unclear what sway a single council member would hold.

Permit approval is a function of the executive branch, not the council. Wendy Shark of the Seattle Department of Construction and Inspections said, “If we feel a proposed project and/or our decision will be controversial, we let the Mayor’s Office know about the project.”

City officials in the past have used certain land-use actions to extract promises from private entities. Former Mayor Mike McGinn fought a street vacation for a nonunion Whole Foods in 2013 (which just opened last week). In 2016, Seattle demanded promises from Amazon, which owns Whole Foods, that a courtyard would be open 24 hours and would allow unrestricted free speech.

Additionally, although a rezone and permit eventually were approved for King County’s new Children and Family Justice Center, that approval was contentious and not unanimous because of opposition from activists. Councilmember Mike O’Brien at one point said he wanted to use the land-use decision as “leverage."

The second point where Pugel and Lewis clearly diverged in their answers to the union related to a suite of regulations intended to improve working conditions for hotel workers, passed by voters in 2016. The Seattle City Council recently passed a set of similar laws that closely replicated the initiative’s regulations after the 2016 ballot measure got hung up in courts.

The provisions included a daily limit on square footage a worker can clean, employer health care requirements and a mandate that workers be given panic buttons.

The most controversial piece, however, was a required ban of guests credibly accused of sexual assault and a provision that hotels must keep lists of guests accused of violent acts.

Lewis said he told Unite Here members he supported both, despite the legal and ideological controversy both have generated. “The people of Seattle looked at that blacklist and 77% said, ‘Approve it,’ ” Lewis said.

Pugel, however, was more circumspect. “I told them I had reservations about a person being accused, and the accusation alone would bar that person from the hotel,” he said, adding, “The keeping of lists was a little problematic.”

The point is largely moot right now. Since the union’s meetings with Lewis and Pugel, the city council declined to pass either the ban or the list, opting instead for more general requirements related to sexual harassment.  Still, Lewis said his support of the original initiative and his awareness of the issues facing hotel workers were received positively by members.

Because the union’s money is independent and free from spending limits, Lewis’s campaign cannot coordinate with Unite Here, an arrangement that has led to some confusing ads in his favor. For Lewis, the entire thing has been a surprise. “I had no idea they were going to invest this much money in my race,” he said.