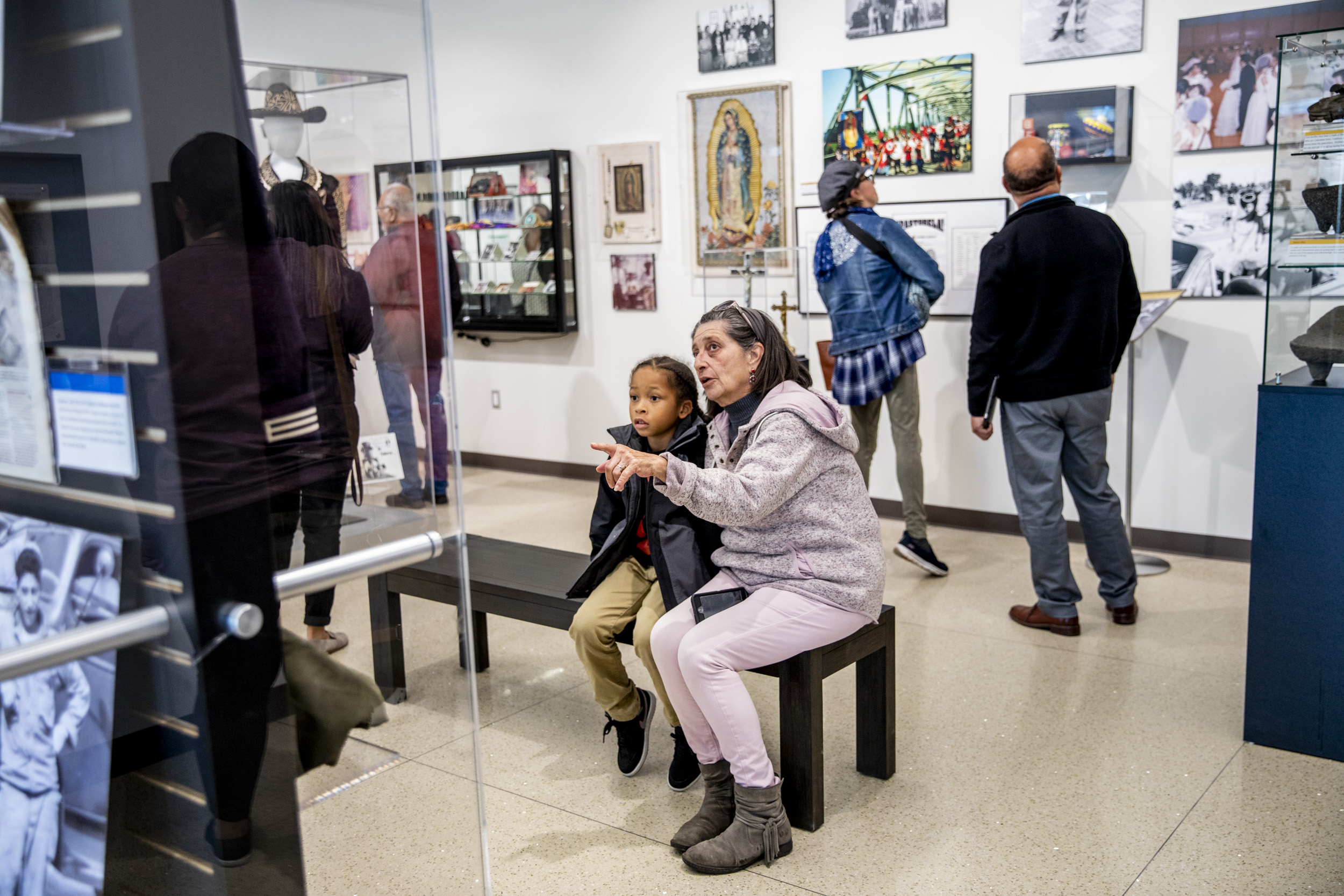 Christina Gallegos of Seattle looks through an exhibit with her grandson Cash Overton, 8, during the Sea Mar Museum of Chicano/a/Latino/a Culture grand opening event on Oct. 24, 2019. The museum is the first in the Pacific Northwest to celebrate regional Latinx history and culture. (Dorothy Edwards/Crosscut)

Three women wearing long white lace dresses with black aprons and red flowers in their hair stamp their feet to jarocho, folk harp music from Veracruz that involves upbeat finger plucking. Their partners, dressed in all white, except for red scarves and straw hats, join in and match the stomps of the women’s heels, underscoring the rapid rhythm of the music. The crowd whistles in support and enthusiasm.

After a quick costume change, the troupe begins a dance from the state of Jalisco. Now the dresses are striking yellow and purple, with puffy shoulders and high collars accented with cascading ribbons. The wide skirts are designed to be swirled into circles and allow the dancers to create spirals. The men sport black charro suits embroidered with gold accents. The mariachi song comes to a close, and they lean into each other as if to kiss, but use sombreros to shield their faces.

“I think when I was growing up I had a cultural identity crisis,” says 20-year-old dancer Katherine Madrigal after she performs.

“I still find that crisis within myself, but being able to have this museum and really see what this culture was helps me know that I belong in this community,” Madrigal says, as she browses exhibits on Washington state’s Mexican American history at the brand new Sea Mar Museum of Chicano/a/Latino/a Culture.

The name alone reflects the difficulty of representing the diverse identities within the Mexican American and Latin American experience.

Museum curator Jerry Garcia admits the name is substantial, and says Sea Mar (the 41-year-old affordable health care organization backing the museum) spent a long time discussing it. The founders decided to include both masculine and feminine spellings, as opposed to the contemporary catch-all phrase Chicanx or Latinx, because it reflects the language used by Mexican Americans during the time period showcased in the permanent exhibit (1930s-1970s).

“We didn’t want to use a term that is in vogue right now, but could be out of vogue in 10 years,” Garcia explains. While “Latino/a” refers to people who identify with a variety of Latin American countries, “Chicano/a” is a term some Mexican Americans have embraced since the Chicano movement of the 1960s. The “x” at the end of identity labels is a fairly new suffix meant to include gender nonconforming folk.

“We tried to be inclusive genderwise, but we know there are [Latin Americans] other than Mexican Americans that are in the state of Washington,” Garcia says.

The new museum draws attention to an often overlooked slice of Washington state history, which includes major Mexican American contributions to agriculture, railroad transportation and civil rights. It also breaks ground as the first museum in the Pacific Northwest to highlight the Mexican American experience in this region.

Between 2010 and 2017, the Latinx community grew by 28% in King County. Mexican Americans are still the largest Latinx demographic in King Country, according to census data, but communities from almost every Latin American country, including Puerto Rico, Cuba, Dominican Republic, Guatemala, El Salvador and Colombia, also are represented.

“We are going to tell their story eventually in the museum,” Garcia says, “but for the first showing it’s the Mexican Chicano experience.”

Jake Prendez, a Chicano artist in Seattle, understands why naming a Latinx center is tricky. He says language around identity is fluid, always shifting. When he opened his own Latinx-focused gallery in White Center earlier this year, he chose to call it Nepantla, which means “torn between ways.” “It’s tough to know what to call ourselves,” he says.

Prendez attended the University of Washington, where he studied Chicanismo from professor Erasmo Gamboa, one of the museum’s advisers. “It takes up a lot of space in academia,” Prendez says. “How do we unify our communities under an umbrella term but also celebrate our uniqueness and variation?”

The museum celebrates a period of Mexican American history that reflects the identities of its founders. Garcia, Gamboa and Sea Mar chief executive officer Rogelio Riojas are all children of Mexican American field workers who labored on farms in Eastern Washington. (Riojas is also one of the original UW graduates who founded Sea Mar in 1978 to provide affordable and culturally relevant health care to the region’s Latinx community.)

Garcia, Gamboa and Riojas all remember the tiny farm cabins they lived in as children in the 1950s. Two similar cabins sit in the rotunda of the museum.

Constructed of cedar and no bigger than 8 by 10 feet, the cabins were brought in from Sunnydale in Yakima County, and had been previously used by migrant workers.

There is nothing dazzling about the decor inside, but for anyone who identifies with Mexican culture, the touchstones are plentiful.

My own mother learned folkloric dances growing up in Mexico City. Her father built railroad tracks in the Pacific Northwest during World War II as a bracero. And my father worked the fields in Hidalgo, Mexico, as a child laborer. I see their stories in the cabin. It’s the small Ponds cold cream tucked in a corner shelf. It’s the vintage stove like the one my mother often reminisces about when she remembers her mother’s kitchen set. It’s the care put into keeping humble belongings tidy. It’s the image of the Guadalupe Virgin Mary on the window, the one whose brown skin and star-spangled veil resonated with Juan Diego, the indigenous man whom she appeared before in 1531.

The small shacks transport three Chicana sisters back to their childhoods, too. At the opening, Sally Cantu, 67; Gloria Cantu-Bash, 65; and Norma Cantu-Ramos, 63, huddle and look at a small aluminum bed inside. They recall fitting all seven of the family’s siblings lengthwise down a similar sized bed when they arrived in Washington from Texas. They remember how in college they put the image of Guadalupe on their window as well.

“It’s the most beautiful thing we have; it’s who we are in our souls,” says Sally Cantu, who wrote a memoir about living and working in Washington’s labor camps called Don’t Call Me Gringa.

“[My Mexican lineage] is something I’m so proud of even when I go to Mexico and they call me Gringa — which I hate,” she says.

Sea Mar has talked about creating the museum for the past 15 years.

After gutting the preexisting building (previously home to a casino and a Hooters), Sea Mar built the new space on its skeleton with a final cost between $10 million and $15 million, according to Garcia’s estimates.

“We did not follow the traditional museum structure,” Garcia says. “We wanted it to have our flavor.”

In addition to the cabins, the everyday lives of rural laborers — and the lasting influence of their Mexican heritage — are revealed through artifacts such as the short-handled hoe tool, which forced stoop labor on agricultural workers. (The tool was banned in 1975, thanks to civil rights protests led by Cesar Chavez.) Photos of weddings and parties alongside items such as rosaries and stone molcajetes (used to mash peppers and tomatoes for salsas) paint scenes of life off the fields. Red flags from the United Farm Workers movement stand proud across from a display of newspaper clippings documenting the braceros program. A film about Cesar Chavez and Dolores Huerta’s grape strike plays on a loop in small theater surrounded by Mexican cinema posters. A wealth of newspaper clippings remind visitors of the contributions of Mexican American veterans, like Guadalupe Alamos, who was awarded a Purple Heart for infiltrating Nazi territory.

“Someone who is a traditional museum curator might say there's too much stuff in here,” Garcia says. “But that's the big difference — we want to saturate it with images and stories of our communities.”

Burien Mayor Jimmy Matta, who attended the grand opening, thinks the museum is an opportunity to build unity. A son of Guatemalan immigrants, Matta remembers working the fields as a kid in Eastern Washington and visiting friends at their parents’ shacks.

“It’s the same story I went through,” says Matta, taking in the exhibits. “I grew up in a time when I wanted to be a Chicano … but I was told multiple times I am not a Chicano because I’m not Mexican American.”

Still, Matta identifies with migrant culture because he was surrounded by Mexican Americans during his upbringing. He recalls attending the Guatemalan consulate’s opening celebration in SeaTac in 2017, and watching dancers perform the traditional choreography of his homeland. “This is really my heritage,” he says. But he couldn’t shake his feeling of Mexican identity.

“It doesn’t matter how many times I go, I identify with the Mexican community, Mexican food, the Mexican dances — I know how to dance zapateado and banda — I connect there,” he says.

Matta wants people to see beyond the labels and instead see how they are the same. He says at the end of the day it’s what makes people American. He’s excited that the new museum will give him a chance to share this part of American history with his children.

“I love this place,” he says, “because I’m able to walk through these halls and take each picture and relate and connect and tell [my kids] the story of family.” 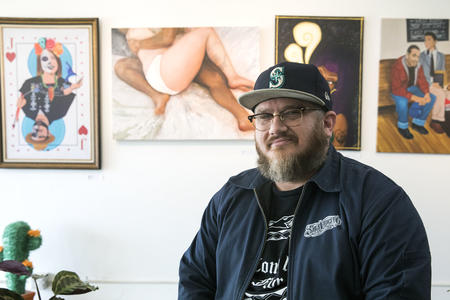 by / May 31
Article continues below