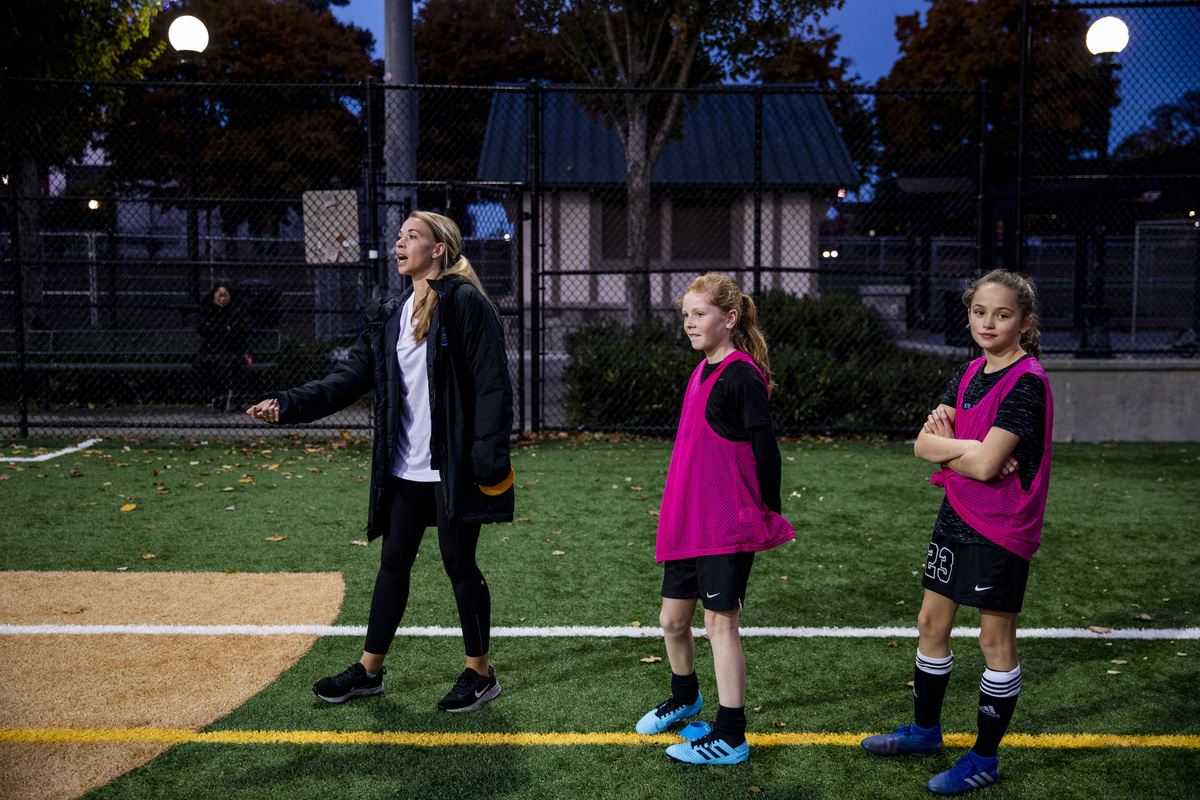 Coach Stephanie Verdoia works with her girls soccer team Reign Academy, a U13 team, during practice at Cal Anderson park in Seattle on Oct. 23, 2019. This is her fifth year as a soccer coach and first year with Reign Academy. (Dorothy Edwards/Crosscut)

I saved my first paycheck in a shoebox under my bed.

I received it right out of college, $1,600 from the National Women’s Soccer League. Months earlier, I had been drafted into the league and spent some time in training camp before being offered my first professional contract: $12,000 a year to play soccer — I could not have been more excited, grateful and shocked.

The year I officially entered the league as a contracted player, 2015, was the third year the National Women’s Soccer League had been up and running. My stunned gratitude at the opportunity was in part a reaction to the simple fact that there was a professional league to be playing in at all. Two previous iterations had each failed financially by the third year.

Being a professional athlete was not part of my plan. Growing up, there were few reasons for young women like me to plan on playing soccer as a profession. I rarely saw women competing at that level, save the World Cup and the Olympics, which came around every few years. But I ended up being the first female athlete drafted to an American professional league in the history of my alma mater, Seattle University. It was unexplored territory. I finished my last collegiate game and walked off the field thinking it might be my last. Then, several months later, my name was announced during the 2015 NWSL draft, in Philadelphia. Before I knew it, I was on a plane to the East Coast to compete with eight other rookies for a single spot on the Boston Breakers.

Even after fighting to secure a professional contract, the experience was assumed to be fleeting. I had teammates in graduate school, starting their own businesses or otherwise planning lives outside of their professional athletic career. Me, I took the LSAT and applied for law school my first year in the league.

And that's where I am now, studying torts and reading case law and making plans for a future as a legal professional. But I stay close to the sport I love, as a coach for young women in the Seattle Reign Academy. It's a fascinating time to be a mentor to adolescent girls. U.S. women's soccer is ascendant; Megan Rapinoe is a national hero. Meanwhile, the #MeToo movement is reshaping the culture, and demands for gender equality have reached a historic fever pitch. While most of my players may not choose the professional life, they are growing up in a world different from the one I imagined when I was their age, or even five years ago.

But, still, choosing to dedicate a life to professional soccer is not as easy a decision as some may presume. The paychecks, health care and structured training exist only during the playing season. When the season ends, so does everything else. During my first two seasons, I did not feel like one of the top 200 female soccer players in the United States; I felt like a part-time seasonal worker. In the off-season, I would move home to Utah, or live with friends in Seattle, trying to find cheap ways to maintain fitness, train at a high level and avoid getting injured.

As many rookies quickly realize, every day in season was a test both physically and mentally. For an overwhelming majority of players, there is no job security, and the uncertainty only escalates in the off-season. It can feel like you are living only for the next day’s match or training session, hanging by a thread while simultaneously needing to perform at the highest level. That is professional sports, and it is irrelevant if you play in Major League Soccer or the NWSL. It is an incredible, singular and exhausting life.

But here’s the thing: Almost every contract in the league is a one-way street benefiting the team and the league. A player can be released at any time without any financial obligations on the part of the club.

This is the glamorous reality to keep in mind when you read about campaigns for equal pay. The movement seeks recognition from league sponsors and the broader public that what is being expected of professional athletes is no different between men and women. Ultimately, it is about more than pay. It is a demand for the respect deserved by all athletes who sacrifice time, overcome injury, endure failure and ultimately excel in their chosen athletic pursuits.

During my first two seasons, I did not feel like one of the top 200 female soccer players in the United States; I felt like a part-time seasonal worker.”

I didn’t think twice after my club in Boston failed to provide me a pair of cleats when mine had holes in the sole, even though I could not afford new ones. I didn’t think twice after my professional debut, in which I went head-to-head with Carli Lloyd, and then had to walk a mile to take public transportation home from the game, as I did every day before practice because the club couldn’t afford to loan me a car. And I didn’t think twice about having to eat peanut butter and jelly sandwiches, the only food available for us after training, because it was free food. I was grateful to be there. It wasn’t until more senior members on my club vocalized concerns about the lack of resources spent on us that I realized what I had been ignoring. We were not consistently treated as serious athletes.

Women's sports are ascendant, and the Seattle area presents a microcosm of both the successes and struggles that women experience in the athletic arena. In the latest edition of Crosscut's Focus series, we explore the growth and development of professional women's sports in Seattle, as well as the victories and challenges faced by the women who have chosen to make sports a center of their professional lives. Read all of the stories here.

I loved my three years as a professional soccer player and I remain grateful for the chance to have been there. Most women in the NWSL feel the same way. Yet the lifestyle can vary from club to club, as different teams provide better treatment of its players based on connections with MLS teams, ticket sales and the generosity of club managers and owners, among other factors.

During my time training with Reign FC, the team owners Bill and Theresa Predmore made a strong effort to ensure a more supportive environment for their players. It’s hard to know what benefits a team can provide beyond a minimum salary of what is now $16,500 per season, and a maximum of $46,200. Every professional athlete knows their career can end suddenly, either through injury or the whims of team management, but the staggering pay discrepancy between women and men only compounds this precarious situation for players in the NWSL. (The average base salary in the MLS is $350,000.) We know there are many fewer opportunities for women compared with men, and that leagues have struggled financially. But how do we balance gratitude with the indignity of being paid a fraction of player salaries in the MLS?

I was not able to find that balance until I began coaching my U13 girls team for the Reign Academy, a program that not only prepares girls for youth national teams, collegiate soccer and future professional careers, but reminds them how to love the game. When I look at their future and potential, it becomes crystal clear. Demanding equality in their athletic experience is not expressing a lack of gratitude for the experience. The two are not mutually exclusive. I strive to teach my players not only how to properly strike a ball, but how to navigate the complexities that come with being a female athlete. We are not given the confidence to walk through this world of athletics that come with high salaries and stardom, as is often the case with our male counterparts. I see it as my job to ensure these girls enter college and professional life with a strong sense of who they are and their strength as athletes. And on this I am certain: each of them is worth more than $16,000 a year. 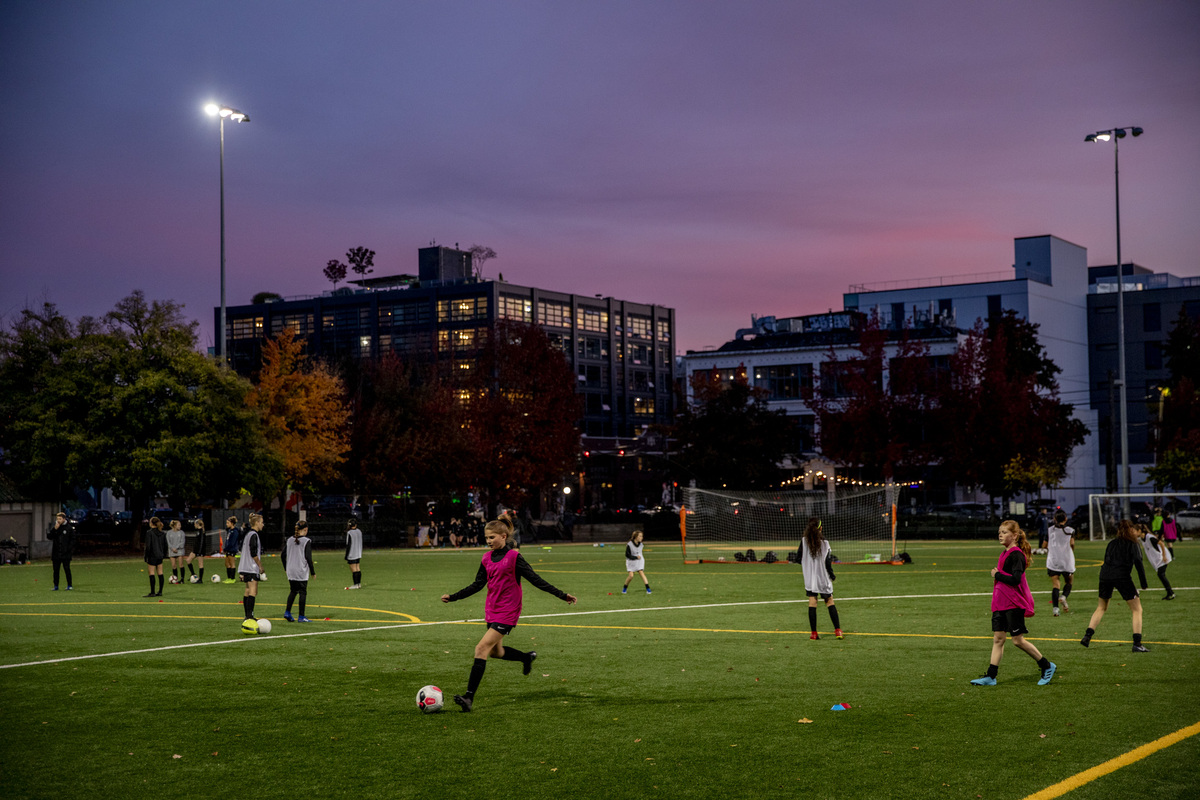 Players with the Reign Academy U13 team run drills during practice at Cal Anderson park in Seattle on Oct. 23, 2019. (Dorothy Edwards/Crosscut)

Players with the Reign Academy U13 team run drills during practice at Cal Anderson park in Seattle on Oct. 23, 2019. (Dorothy Edwards/Crosscut) 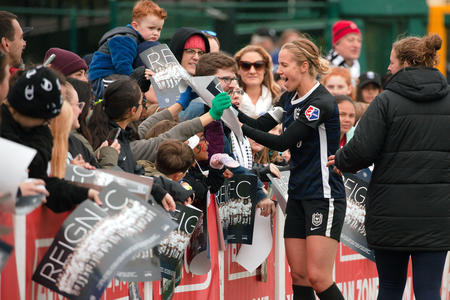 A new Reign begins: Women’s soccer makes itself a home in Tacoma

The Women's World Cup helped the Reign FC attract new fans. But a new home in a smaller market could be what gives the team true staying power.

A new Reign begins: Women’s soccer makes itself a home in Tacoma

The Women's World Cup helped the Reign FC attract new fans. But a new home in a smaller market could be what gives the team true staying power. 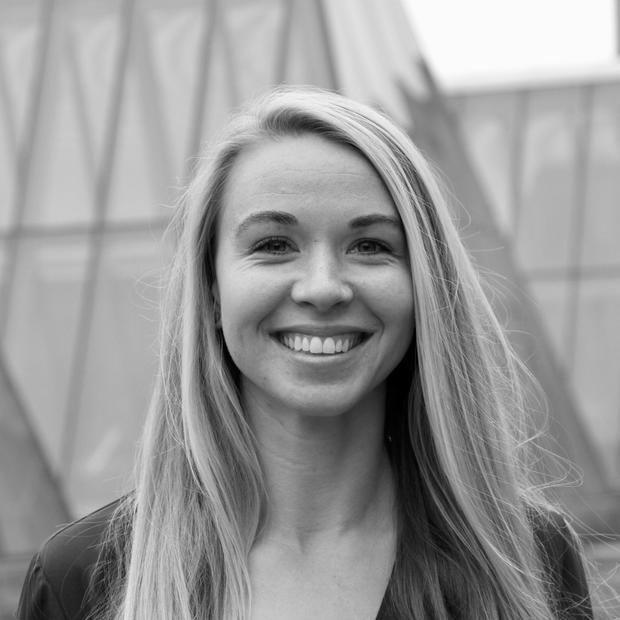 Stephanie Verdoia is a former professional soccer player and a current student at the University of Washington School of Law.