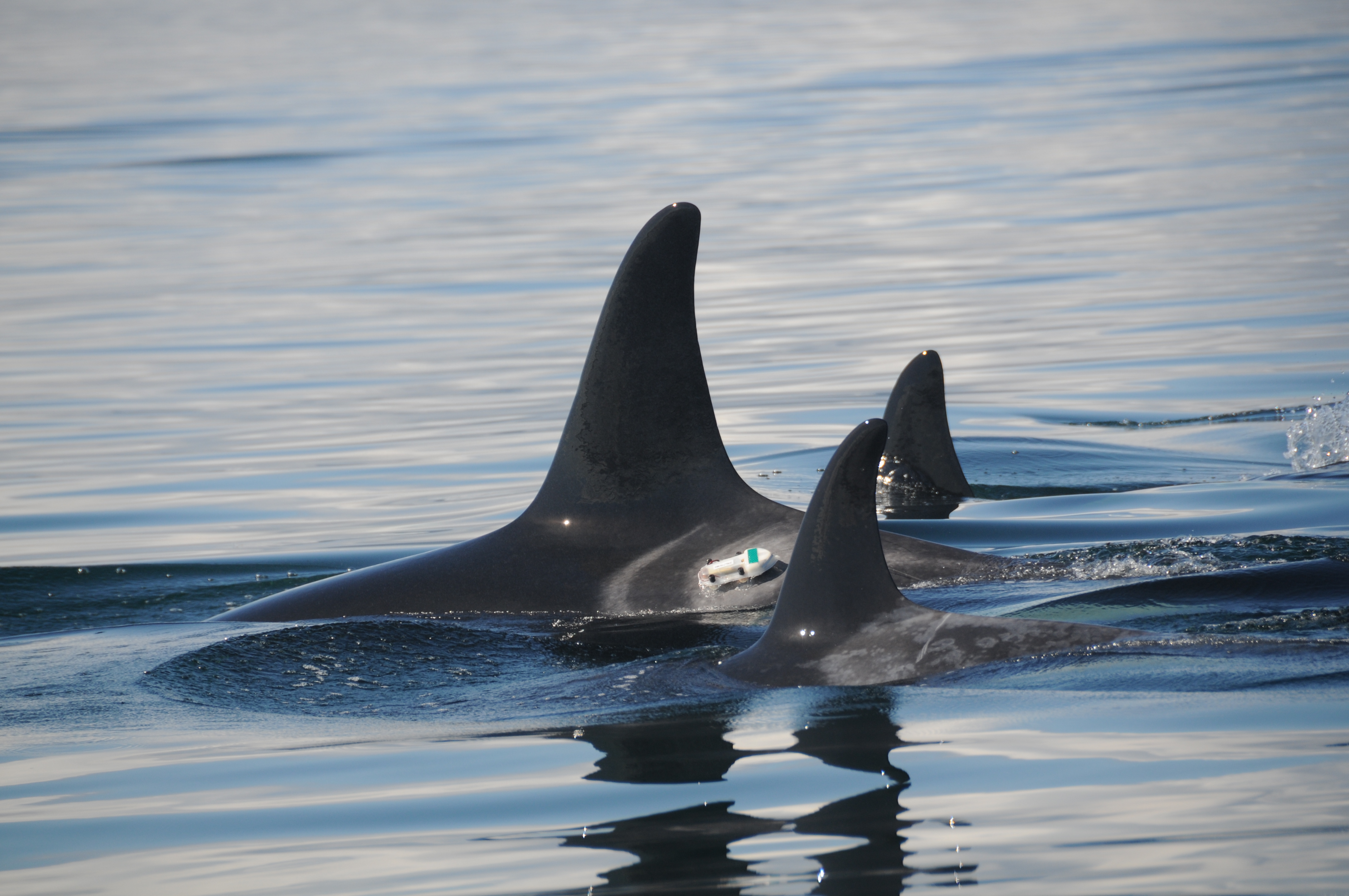 In the race to save Puget Sound’s starving southern resident killer whale population — down to 73 members among three pods — researchers and policymakers have pitched a broad assortment of science-backed solutions. Key among them: increasing the abundance of endangered chinook salmon, the southern residents’ food of choice; minimizing pollution; and regulating boat traffic and whale watching so orcas can live and feed in peace.

But exactly how orcas go about foraging for their dwindling food source has long been a mystery. Without fully appreciating what enables them to hunt effectively, scientists say we may miss opportunities for effective solutions.

“By missing the complete picture, we fail to make important connections that can have huge implications for conservation,” says Dr. Jennifer Tennessen, a postdoctoral scientist at the National Oceanic and Atmospheric Administration's Northwest Fisheries Science Center and a research associate in the Western Washington University Biology Department. 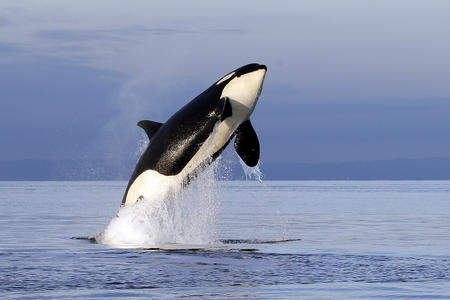 Scientists, conservationists and a concerned public debate whether a 30-page report can kickstart a real effort to save Washington's imperiled orcas. 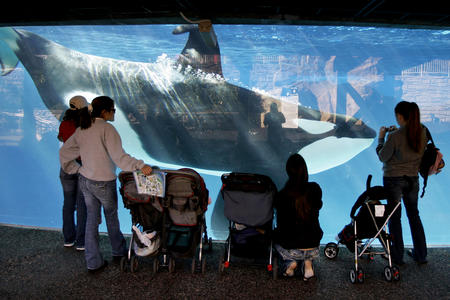 That conservation effort is being monitored worldwide after August 2018 footage of orca mother Tahlequah carrying her dead calf for 2½ weeks shocked the globe.

A new paper from Tennessen and six of her NOAA colleagues, published in the Nature Research journal Scientific Reports, is part of ongoing efforts to shed light on the secret underwater hunting life of orcas. Knowing more may help us understand how human activity on the water impacts their ability to thrive in critical habitat.

Southern residents have a particularly grueling feeding challenge. Of salmon species, chinook provide the most energy bang for an orca’s buck — but because they tend to swim many meters deeper than other salmon, orcas have to work harder to hunt them and distribute them to their family members.

Historically, our understanding of how that foraging journey actually works has been limited to what we can see at sea level: surface kills, fecal samples, discarded floating prey. Without being able to follow orcas underwater ourselves, the process of hunting was opaque.

But in 2003, researchers at Woods Hole Oceanographic Institution in Massachusetts developed a novel temporary tool to help researchers noninvasively track orcas throughout their day. About the size of a cellphone, “DTags” are effectively suction cup-based whale Fitbits. Once attached to a whale, they track whale movement patterns, depth and hunting sounds up to 1,150 feet underwater. “Effectively, [we’d be] able to travel alongside them as they hunted for salmon, socialized, traveled and rested,” Tennessen says.

NOAA’s scientists realized they had a shot at tracking, codifying and analyzing the breadth of orca foraging tactics to create a picture of an orca salmon hunt, from length of the hunt to types of behaviors used.

“When we observe orca behavior at the surface, we are glimpsing about 5% of their lives,” says Tennessen, who has been interested in orca behavior since high school. “The aim of our study was to ‘observe’ this 95% of missed observations of underwater behavior.”

“They're using a really cool tool here. And I think that this tool is going to help us evaluate things that we're struggling with now, [like] noise issues with boats being close to whales,” says Dr. Joe Gaydos, SeaDoc Society’s science director and a member of Gov. Jay Inslee’s Orca Task Force, now in its second year. Gaydos and his task force colleagues are responsible for making policy recommendations to Inslee based on the best conservation science available.

How foraging research gets done

Tennessen’s mentors, Drs. Marla Holt and Brad Hanson, started lobbying for funding to do DTag work in 2009, and the team tagged 29 male and female southern residents between 2010 and 2014. The new Nature paper is based on years spent analyzing that field work, focusing on the 13 whales whose data weren’t corrupted by excess noise.

Tennessen and her colleagues looked for three things: Do whales engage in a variety of hunting behaviors? Do they switch among those behaviors and undertake them randomly, or do they take place in committed bouts of time? And do male and female whales exhibit different hunting behaviors?

“We expected to see that there are many more components to foraging than one can ‘see’ at the surface,” Tennessen says. “For example, it is difficult to know for certain whether an animal is echolocating just by observing its surface behavior, but by utilizing tag data we [would be] able to directly measure this.”

Getting the data is a “big team effort,” involving a  professional “tagger” in an inflatable boat deployed to attach the DTags. 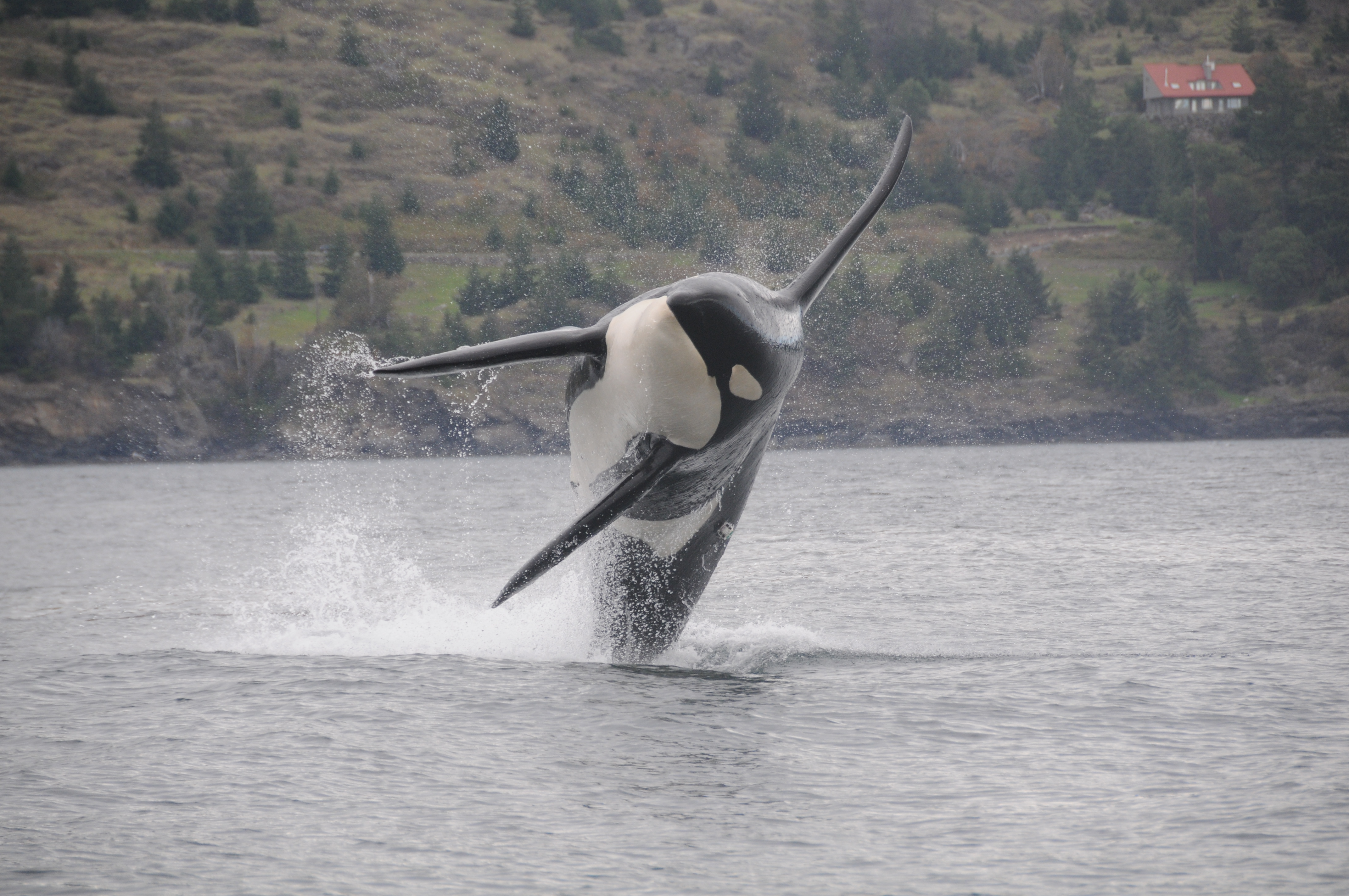 “Trying to tag large, powerful animals that are continuously moving and diving beneath the surface of the water, which has tides, waves, swells —while sometimes in the wind or rain or with glare from the sun impairing our ability to follow the whales — makes for a really difficult time!” Tennessen says. “It is rarely the case that we get a tag on immediately. More often, the stars don't align for several hours, which can be quite frustrating.”

The tagger stands near the bow of the boat with a carbon fiber pole 20- to 30-feet long, a DTag at the end.

“When the whale is close enough, the tagger in a quick motion [slaps] the pole down and when the tag touches the whale’s back, it pops off of the pole and sticks to the whale. Typically it stays after that, [but] sometimes they do fall off immediately,” Tennessen says. While the tags usually fell off after about eight hours, these days they can stay on for up to 24, she says

Once they fall off, the tags float to the surface and broadcast a signal so that the team can recover them from the ocean.

The team measured every dive that went at least one meter deep. With 13 orcas’ worth of data, they applied a pattern-finding algorithm based on two types of echolocation (buzzing and clicking) and four movement variables to identify different “behavioral states,” or types of dives.

Discovering the ins and outs of orca foraging

The algorithm revealed orcas have five diving activities: shallow searching for prey, with echolocation; intermediate dives with some echolocation; deep prey pursuits — “picture being on a roller coaster ride with lots of erratic movement, echolocation and buzzing,” Tennessen says — and the low-movement, low-sound activities of both shallow-water breathing and traveling. Some of these states are decipherable only by detecting the acoustic recordings of echolocation, which only the DTag can provide.

The data also reveal how, for orcas, the hunt starts well before the big chase.

“Foraging behavior isn’t just a dive to grab a salmon,” Tennessen says. It starts out with a prolonged period of searching with echolocation near the surface, followed by a deeper dive or a “beeline” straight down to catch the fish. After that, behavior varies: Orcas come back to the surface to breathe and rest, and they continue foraging or they switch to another activity, like traveling.

These behaviors don't appear to stem from spontaneous decisions: When orcas commit to a hunting behavior, they stick with it.

“Whales aren't just randomly chasing the fish here or there,” Tennessen says, “which would suggest that there's something important driving that behavior.” Possible explanations are that orcas employ groupwide decisions, or make choices based on the availability of salmon. But the “why” of these hunting behaviors being “clumped in time” is still unclear.

That there’s a method to hunting underscores the potential consequences of disturbance, she says. “If there is a right time to do something like hunting … whales may be particularly vulnerable to disturbance during these foraging periods, especially if the whales can’t simply wait until the disturbance ends because they would miss important foraging opportunities,” she says. “Activities that could interfere with hunting could be detrimental” at many points during the hunting process.

That may come down to males’ greater energy requirements, Tennessen says. “Alternatively, females’ time might be constrained because of other duties, like caring for calves. This means that disturbance could potentially have a greater impact on females if their already-limited foraging opportunities are further impaired. We are currently studying this further.”

More foraging research is on the way

This new work is setting up the team to do critical analysis of whether human activity impacts foraging success.

“[Here], we didn't show that disturbance is affecting foraging. But we pave the way for being able to do that soon,” Tennessen says. “Now that we understand what [foraging] looks like, we can start asking, how does the presence of vessels affect foraging outcomes? Do whales seem to be less likely to catch fish when a lot of vessels are present or when noise is elevated, or other factors like that?”

That’s exciting to Gaydos. “We actually know a lot about these animals, and I feel like we were able to make a lot of recommendations that were based on really good science,” he says. “[But] one of the challenging [things] for us was this question about noise in vessels and vessel interference.”

That was a hard discussion, he says, because everyone at the table recognizes the value of whale watching, both economically and as a way to introduce people to orcas.

“I think this is the sort of data that's going to help us in the long run understand, where can we have boats? How do we have boats there? How many boats do we have there?” Gaydos says.

To better determine whether the plight of the southern residents is unique to themselves, Tennessen says, NOAA is comparing this information to similar data from northern residents..

“The northern residents, while still endangered, have continued to grow over the same period of time that the southern residents have been declining,” Tennessen says. “And so we're trying to understand if differences in foraging behavior could be related to that, or if differences in the disturbances that they experience and the potential impacts of those disturbances on foraging could potentially explain population decline as well.”

This method of tagging will likely inform future research and conservation efforts. For instance, Tennessen and her colleagues have begun a three-year tagging study to collect overnight whale data that can address a gap in our foraging knowledge.

Gaydos reinforces that continued research is as important as action.

“I think what people have to remember,” he says, “is it's still important — even though we're taking actions for recovery — to continue to do science to learn things and  to measure if the actions we've taken have made a difference.”

Update: This article was updated at 11:09 a.m. on Oct. 24, 2019, to correct the relationship between the journal Scientific Reports and the journal Nature; and to reflect updated information from the research team about the number of whales' data involved in the study.

Scientists, conservationists and a concerned public debate whether a 30-page report can kickstart a real effort to save Washington's imperiled orcas.