Most Seattle voters support a business tax for affordable housing — at least in theory, poll says 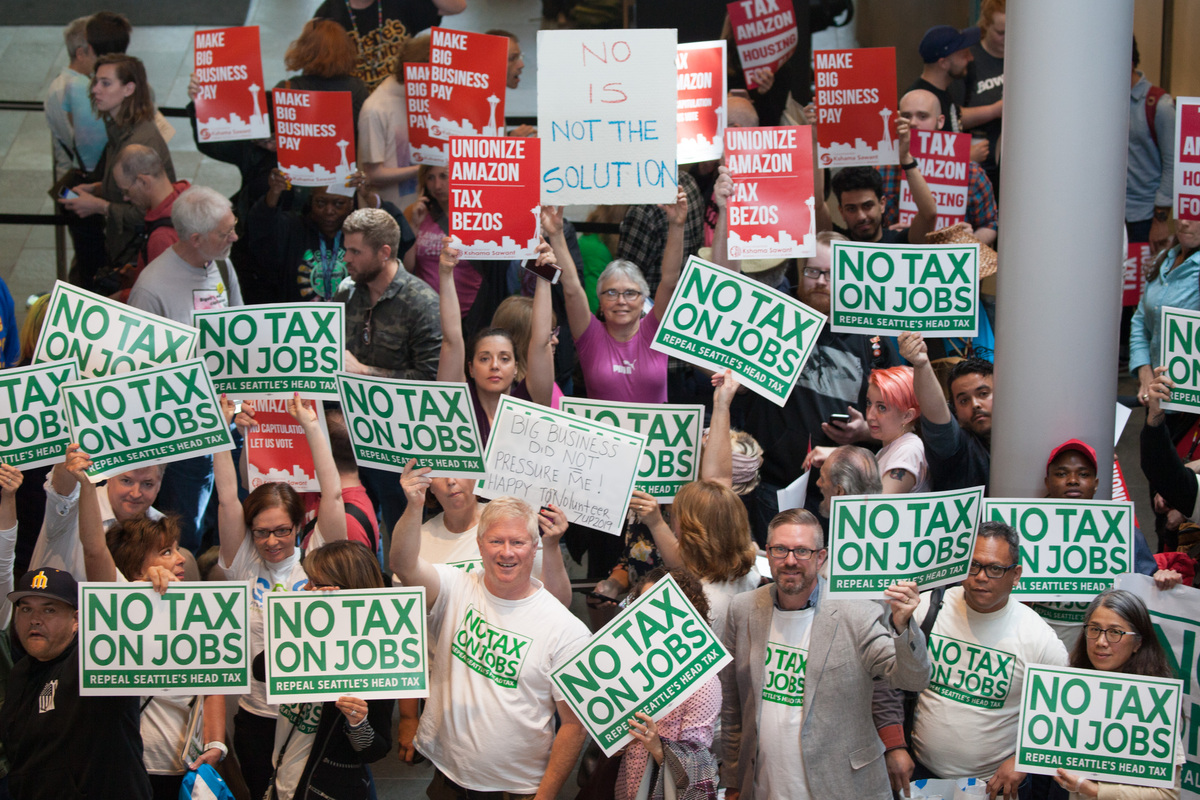 Proponents and opponents of the head tax wait in line prior to a city council vote that repealed the head tax at City Hall in Seattle, June 12, 2018. (Matt M. McKnight/Crosscut)

No single issue has colored the current races for Seattle City Council more than the so-called “head tax” on large businesses, passed in 2018, then repealed a month later amid private polling that suggested that opening the new revenue stream was politically toxic.

But with ballots arriving next week, 56% of Seattle voters still support at least the idea of a tax on large businesses to fund affordable housing, according to a new Crosscut/Elway Poll. Forty percent oppose the idea.

The poll, conducted October 5-9, surveyed 432 likely Seattle voters and has a margin of error of plus or minus 4.7%.

The question about the business tax, one of many asked in a poll measuring approval of city governance, reminded respondents of the head tax fight. “Last year, the council passed and then repealed a tax on businesses based on number of employees,” respondents were asked. “Known as the ‘head tax,’ the money was intended to be used to address the homelessness issue in the city. The tax was not implemented. Would you favor or oppose some kind of tax on large businesses to pay for developing more affordable housing in Seattle?”

There is no current proposal to revise the head tax, which would have imposed a $275 per employee annual tax on businesses with gross receipts of over $20 million. The Crosscut/Elway Poll, therefore, tested theoretical support, absent specifics or ongoing campaigns for or against.

“On the one hand, there’s still an appetite to have that discussion and move toward that,” said pollster Stuart Elway. “On the other hand, there’s a lot of room for opponents to shoot it down along the way.”

The now-defunct “head tax” — officially known as the employee hours tax (EHT) — would have raised more than $45 million a year for some combination of homeless services and affordable housing. But a firestorm of criticism followed its passage last year as construction unions and business groups strongly opposed it. Amazon at one point threatened to cease construction of one tower and sublease space it was planning to fill in another (which it did several months later).

Although the council repealed the tax in the face of a bruising ballot referendum, it nevertheless has cast a long shadow over this year’s elections, with candidates pressed to explain their support or opposition at every turn.

Shaun Scott, a candidate for the District 4 council seat and a head tax backer, said he consistently hears support for a tax on large businesses while knocking on doors. “I would have to say that most people that I’ve talked to are in favor of it,” he said. “I don’t know the last time I talked to somebody at the doors that were not in favor of progressive taxation on large corporations, financial institutions or developers.”

“I think in general the narrative about the EHT or corporate taxes being toxic was kind of overstated,” he said.

However, Heidi Wills, a candidate in District 6 who opposed the tax, said that while she hears widespread calls for more affordable housing, “I would say also that I have not found too many people who felt like the head tax was a good idea.”

Wills said she has heard from people at their doorsteps that they didn’t trust the council to spend the money well and are weary of disadvantaging Seattle businesses. Wills said she heard that any approach to addressing homelessness or the dearth of affordable housing, be it a tax or something else, should be regionwide, a position she holds.

Elway, who has been conducting polls in Washington state for four decades, said he believes support may depend on how any such tax is delivered, which would mean the perspectives of Scott and Wills could both be true. “We like the idea of some kind of tax on large businesses, but any specific tax will get, ‘Oh no, not that tax,’” he said.

This reading is supported by one poll respondent, Mark from West Seattle (who didn’t want his last name used). He said he would “probably” support a tax on large businesses. “ ‘Probably’ leaves me a little wiggle room because I’d want to know some specifics about the harm to the businesses and the benefits to the homeless,” he said. He thinks it’s reasonable to ask corporations to help out, “especially given the wealth that is in the city.” But he said, “It’s a balance of whether it’s a disincentive of even having a business here.”

A majority of the 14 candidates running for city council don’t support a return of the head tax. In a recent forum hosted by Amazon, three candidates — incumbents Kshama Sawant and Lisa Herbold, as well as Scott — held up signs saying “yes.” Eight held up “no” signs and one, Dan Strauss, put his sign sideways to say “maybe.” Tammy Morales was absent from the forum, but has said she supports the tax. Councilmember Debora Juarez was also absent; she voted for both the tax’s initial approval and subsequent repeal.

Both labor and business have spent heavily on this year’s election. But a recent $1.05 million cash drop from Amazon to the Seattle Metropolitan Chamber of Commerce’s political action committee makes the tech behemoth by far the biggest single funder, with the company’s total contributions now topping $1.45 million, shattering spending records. “The status quo isn’t working: we have a dysfunctional, toxic environment at city council and employers, including our city’s largest private employer, want a return to good government,” said Markham McIntyre, executive director of the committee, Civic Alliance for a Sound Economy.

But for Councilmember Kshama Sawant, the head tax’s biggest proponent, the move represented an attempt at a “hostile right-wing takeover.” She added, “We cannot allow [Amazon CEO Jeff] Bezos to buy this election.”