New EPA regulations could allow for more polluted waters, and tribes and state officials are worried

A unilateral reversal of a Washington-specific water quality standard is creating concern around human health and control of state waters. 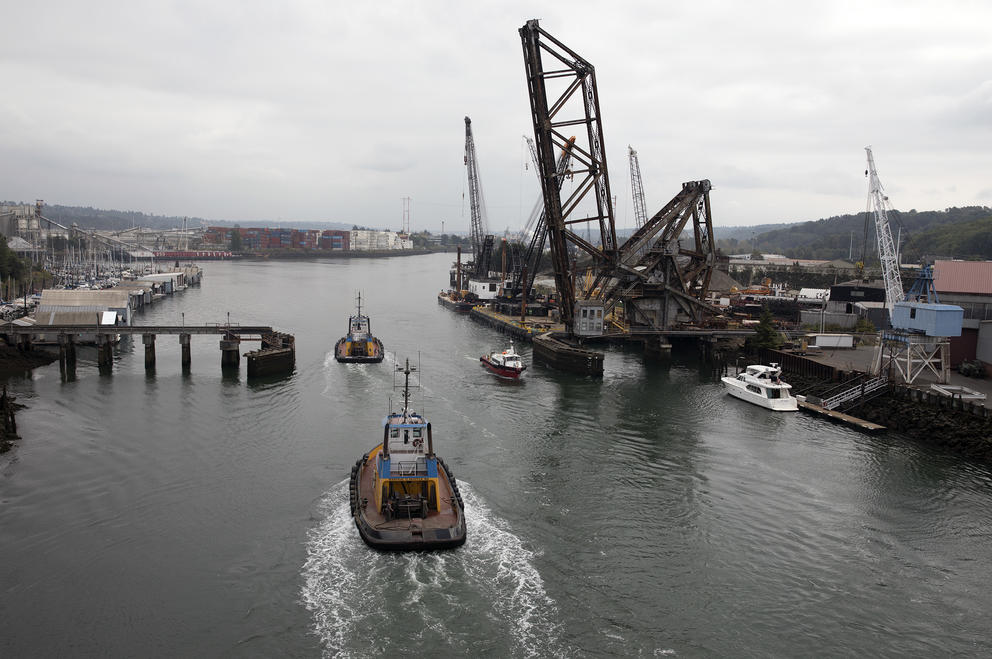 In this 2017 file photograph, tugboats are seen entering the Duwamish River from Elliott Bay in Seattle. (Matt M. McKnight/Crosscut)

Lydia Sigo, a geoduck diver and Suquamish Museum historian, has harvested seafood from central Puget Sound  with her family since her youth on the Suquamish reservation ⁠— for business, sustenance and religion. As a Suquamish tribal member with Duwamish heritage, it’s her treaty right to catch and co-manage fish and shellfish in these waters with state and federal authorities.

These days, she thinks those treaty rights ⁠aren’t being fully respected. The Suquamish depend on some waterways often exposed to pollutants, which means the afflicted seafood they rely on to survive has the potential to be vehicles for toxic chemicals.

“What good is the right to fish if your family's going to be poisoned? That's not a right,” she says.

In May, the Environmental Protection Agency announced unilateral changes to Washington state’s surface water quality standard for human health in response to a petition from eight business groups — and the Suquamish and other Washington stakeholders took notice. Washington agencies, environmental groups and tribal nations are now embroiled in a disagreement with the Trump administration’s EPA over not only potential exposure risk to humans and food species from pollutants in state surface waters, but also states and tribal rights.

For tribal groups that say they mostly eat local seafood, a water quality adjustment could be profound. The state Department of Ecology estimates the Suquamish locally source up to 96% of fish and 81% of shellfish they consume.

“Right now, you know, the kings are running, and soon the coho will be running, and my uncle will bring smoked salmon here for me and my son, who will eat an entire smoked salmon by himself in one sitting,” Sigo says. “But by practicing our treaty rights, and eating our traditional foods, I am exposing my child to very dangerous chemicals.”

The reversal is just the newest step in a series of federal environmental regulatory rollbacks.

“There just seems to be — not just in Washington state but across our country — attempts to roll back environmental protection," says Alyssa Barton, policy manager and executive coordinator at Puget Soundkeeper, an environmental group. "And I understand that the messaging is to reduce regulation, maybe making it easier for corporations to do business, but the impact is just devastating the environment across the board."

In 2016, Washington state and the EPA agreed on a new water quality standard for the state — a modified version of the state's proposal, updating a decades-old version. These surface water quality standards for human health regulate how businesses and communities may impact waterways with 99 high-priority pollutants, whether intentional or accidental.

These regulations cover well-known pollutants that are hard to break down, such as PCBs and the most toxic form of dioxin. These chemicals can disrupt hormone function in fish and the people that eat them ⁠— especially children — and adjusted criteria for them have attracted attention. By reverting to Washington's proposed 2016 standard, EPA would allow for a fourfold increase in the acceptable amount of dioxin and nearly 20 times the amount of PCBs in Washington waters, based on slight differences in how the state and EPA calculated pollutant pathways in the environment.

“We’ve watched our salmon runs decline and decline year after year. And we're watching our orca whales die. And when they do get tested, they are full of these dangerous PCBs and chemicals, because they're eating the coho that we're eating, too,” Sigo says. “I know that if this is happening in the orca whales; this is happening to my community.”

The new criteria were also based on factors that include limiting cancer risk rate to one in a million, assuming the average Washingtonian eats 175 grams of seafood a day (just over 6 ounces). Though this accounts for more than the average American fish consumption rate used by the EPA of 22 grams per day, worried residents remain concerned it isn’t high enough.

“It wasn't high enough, because I know in one sitting, we can eat a lot more than 175 grams,” Sigo says.

Washingtonians as a whole eat more seafood than the average American, with many demographic groups in the state eating significantly more than that. The Department of Ecology estimates that between 1.4 million and 3.8 million adults “eat finfish or shellfish at least occasionally”; an estimated 380,000 of them are “high fish consumers” who eat 250 grams per day. Research published in 2013 shows members of Washington tribes regularly eat more than the national average, with some Suquamish people eating more than 700 grams a day.

“More worrisome still are the statistics for children, who have greater sensitivity to many [chemicals] — at least 29,000 Washington children eat over 190 grams of fish per day,” Puget Soundkeeper's Barton says. She notes that those estimates are conservative.

In 2017, eight Washington industry associations petitioned the EPA to reverse the new standard to what the state originally proposed. The industry groups claimed they couldn't meet current water quality standards with today’s industrial technology. The EPA announced it would reconsider the standard in 2018, and, without consulting the state or tribal stakeholders, announced in May 2019 intentions to change that standard.

The state of Washington immediately filed a lawsuit, and the EPA set up hearings and a public comment period.

Chris McCabe — executive director of Northwest Pulp and Paper, a petitioning association — was one of dozens of people who spoke at EPA Region 10 headquarters in Seattle on Sept. 25 after EPA administrators gave a short presentation explaining the changes. Those opposed to the change dressed in red for solidarity and cheered on speakers like Sigo.

“This issue is absolutely not about profit margins — it's about being able to meet impossibly stringent, aspirational water quality standards, and what happens or doesn't happen when these standards aren’t met,” McCabe said at the hearing. “Unachievable standards of any type ... do not provide meaningful environmental protection. Instead they result in permitting chaos, uncertainty and litigation.”

Some researchers say the extent of possible changes to health risks based on the water quality standard adjustments are difficult to pin down.

"Anytime a regulation is changed, there's actually a calculation that's supposed to be done. There are often assumptions made in these calculations,” says Dr. Wayne Landis, director of the Institute of Environmental Toxicology at Western Washington University. “If someone raises the amount of a chemical like a PCB in an organism that's allowed for you to eat, that will increase the probability of getting the disease. [But] the amount that it will increase that probability is really hard to determine.”

“Water quality standards should only be changed when there's a strong scientific basis for it. Most of the water quality standards, it took years to develop them. And so changing them without an extensive review period makes me quite nervous,” she says. “If anything, we've seen pretty consistently that we tend to underestimate risks.”

Maia Bellon, director of the Department of Ecology, spoke at the EPA hearing about damage to the state’s authority to protect the environment and human health.

“EPA is dead set on systematically dismantling clean water protections and states’ rights,” she argued, noting the EPA acted unilaterally and did not first consult the state or tribal nations. She called the changes in the standards “regressive and illegal.”

“As the federal agency that stewards the Clean Water Act, EPA knows there are only two circumstances under which you can repeal Washington's rule: One, if we ask you to do so and, two, if our rule is not protective enough,” she says. Neither of those circumstances exist.”

These issues are at the center of the state’s June 2019 lawsuit against the EPA, which emphasizes the confusion and resulting litigation hangups that may ensue from the rollback. In its May 10, 2019, letter to Bellon, the EPA claimed to have the authority under the Clean Water Act to reverse the standards it originally set.

“I think from an environmental protection standpoint, the state and our communities lose if we're about getting to clean water,” says Heather Bartlett, water program manager at the Department of Ecology. “Dischargers are going to have permits that are hung up under appeal or they'll be stayed, variances will be compromised in a public process that will become incredibly contentious because communities feel betrayed, and the state will just be left in chaos.”

Citizens have until Oct. 7 at 9 p.m. to submit public comments to the EPA via Regulations.gov, under "Withdrawal of Certain Federal Water Quality Criteria Applicable to Washington." The EPA is required by law to provide responses to "substantive" comments.

“After they do respond, they can go ahead and finalize this rule,” Puget Soundkeeper's Barton says. “The only hurdle then would be a lawsuit.”

For community health clinics, one medical crisis could cause another

The coronavirus is depleting the financial reserves of many rural clinics, which are often the only health care choices for low-income patients.

We’re opening up our reporting process to our readers as part of a larger effort to be more transparent and inclusive.