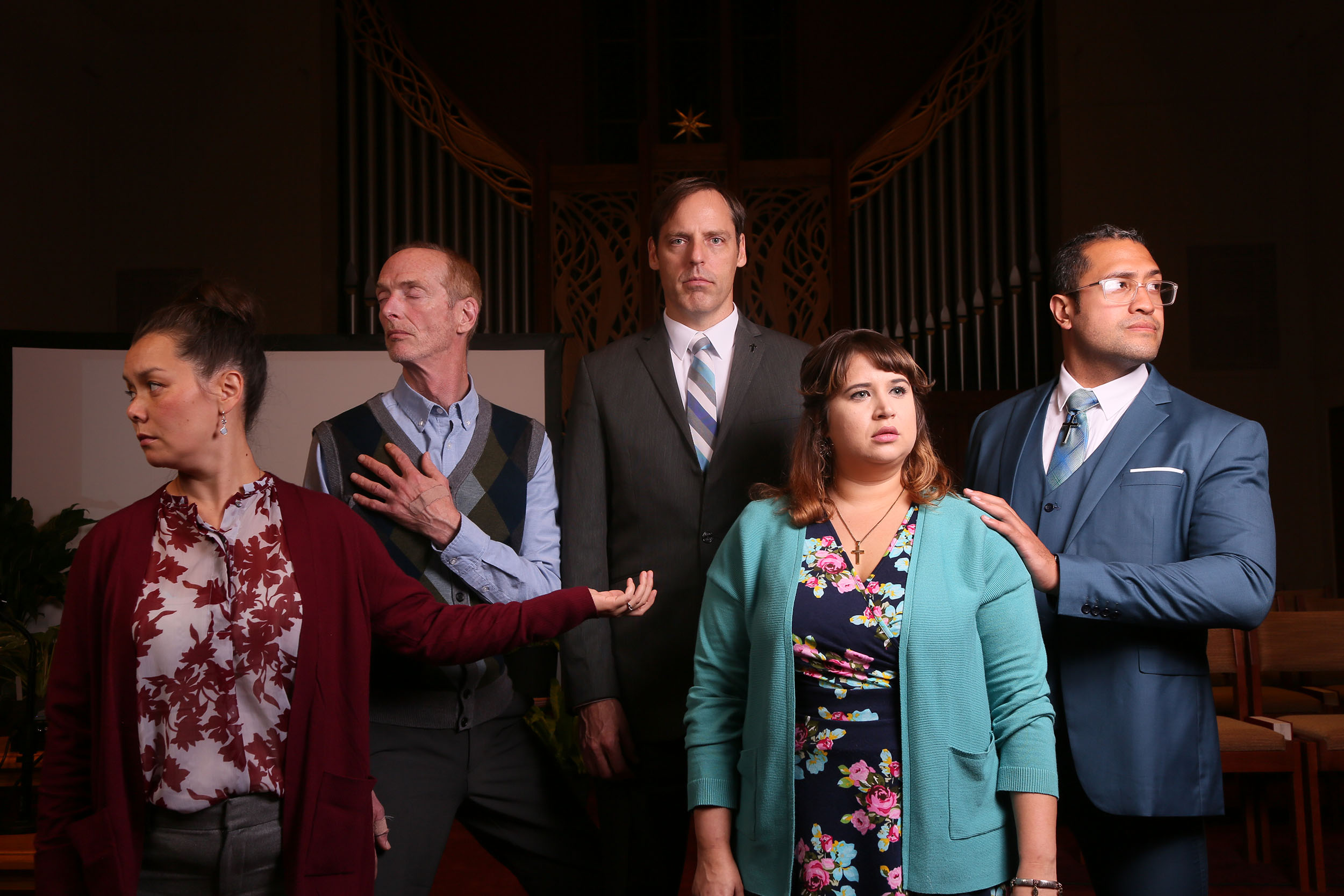 You­ head into a church sanctuary for a service. You take a seat as the choir files in and the accompanist plays the chords to the opening hymn. After everyone joins in the hymn, a pastor rises to deliver a sermon.

This familiar ritual was repeated last weekend in downtown Seattle in the Plymouth Church, United Church of Christ, an impressive white structure on Sixth Avenue. But the sermon was delivered by an actor, and the congregation included theatergoers mixed with Plymouth church members, who came not to worship, but to watch Lucas Hnath’s thoughtfully provocative play, The Christians.

Produced by the secular Seattle company Pony World Theatre, Hnath’s 80-minute drama considers theological questions and examines our notions of tolerance, faith and the role of religion in contemporary society. It is a rare play that centers on religion but doesn’t preach it. The script has hit a nerve, and is being presented at theaters throughout the country.

But viewing this work inside an actual house of worship is especially resonant. (The production will move to St. Peter’s Episcopal Church in the Chinatown-International District area for an Oct. 17 - 26 run.)

The idea of doing a “site-specific” staging was in keeping with the mission of Pony World, says co-managing partner Brendan Healy. The troupe often chooses plays with topical themes: Earlier this year it staged “Language Rooms,” a lacerating drama by local theater luminary Yussef El Guindi about the interrogation of terrorist suspects, in a former federal immigration holding facility in SoDo. (For the play, it handily doubled as a Guantanamo Bay-like detention camp.)

After sending emails to about 30 churches in the area, Healy found six who were receptive to lending their worship space for performances of The Christians. It worked out with three: Plymouth, St. Peter’s and the Phinney Ridge Lutheran Church, where the show debuted earlier this month.

It is striking to hear, within a church setting, a play that questions an aspect of Christianity shared by many believers: the existence of a hell for sinners and nongentiles, and a heaven for only devout Christians.

As audience members sing hymns (lyrics provided) and bow their heads in prayer (or not), Pastor Paul (well portrayed by Evan Whitfield with charismatic sincerity and a dash of smugness) announces that his evangelical megachurch has paid off its longstanding debt for a snazzy new building. But he is just as excited to share a recent spiritual epiphany. After much thought and contemplation, he no longer believes in eternal damnation.

The minister reports that God has told him, “You’ve gotta take people out of the Hell they’re already in,” rather than threatening them with one in the afterlife. Therefore, he states with righteous confidence, “We are no longer a congregation that believes in Hell.”

And yet, as much as Pastor Paul touts the flow of “communication” between himself and his flock, he is clearly surprised when Associate Pastor Joshua (Fune Tautala) rises to passionately object. “Hell is the price we pay for sin,” Joshua counters. The ensuing debate turns into an amusing yet strongly felt scriptural duel, with each man quoting biblical chapter and verse to bolster his position.

Joshua isn’t the only one who takes umbrage. Choir member Jenny (Pilar O’Connell), a single mother who has found fellowship and faith in the church, questions how Hitler could wind up in the same heaven as her child. A church elder (Mark Fullerton) is concerned about how this new credo will affect the church as an institution.

And Paul’s wife, Elizabeth (Sunam Ellis), not only disagrees with her husband. She’s stunned that he has gone public with this dramatic shift in thinking before discussing it first with her.

Pastor Paul had expected to win worshippers over with his open-hearted belief that all God’s children deserve a place in heaven. Instead he creates a schism, driving many longtime church members away.

Raised in Florida, playwright Hnath knows whereof he speaks. He grew up in an evangelical megachurch, and his mother became a minister. He attended religious schools, was active in a youth ministry and considered becoming a pastor himself.

But as an adult, Hnath, a Tony Award nominee for his recent play Doll House, Part 2, has kept his current religious views to himself. In this quietly probing work, a national breakthrough for the writer, he scrupulously avoids making moral judgments on either side of the theological argument.

“A church is a place where people go to see something that is very difficult to see,” writes Hnath in a program note. “A place where the invisible is — at least for a moment — made visible. The theater can be that, too.”

Pony World’s Healy first saw The Christians at the Humana Festival of New American Plays in Louisville, Kentucky, where it premiered in 2015. “Despite my cynicism about organized religion, I was incredibly moved by how thoughtful and humane it was. There was a dignity to it,” says Healy, a self-described atheist.

“There are no saints in this play and there are no villains. The characters are all intelligent, articulate, flawed, caring people,” Healy says. “The humanity Hnath is able to reveal in each of them is one of the things that draws me to it, and also how it looks at the challenges of being part of a faith community.”

While The Christians might be controversial in parts of the nation where fundamentalist Christianity is deeply woven into the cultural fabric, mounting it in Seattle is another story.

In a 2017 Gallup survey, 47% of Washington state respondents said they were not religious and seldom (or never) attended religious services. By that measure, Washington ranks as the sixth least religious state in the U.S.  And just look around town: Once-thriving churches here have seen their membership dwindle, mainly because younger people aren’t joining.

But Plymouth Church music director Wanda Griffiths and the Rev. Dr. Kelle Brown, its co-pastor, welcomed the play — as the first outside-theater event in their space and a complement to Plymouth’s commitment to social justice. The church also hosts Muslim prayer services, supports Lambert House (a community center for LGTBQ youths) and offers free public workshops on institutional racism.

“I think it’s very powerful for people to experience this play in a church,” says Griffiths, who appeared with her choir in the Plymouth run. “The audience was so mesmerized throughout all three shows here, and it’s not an easy, light play. It keeps peeling back layers of what happens when people struggle with their faith, and end up taking actions based on those struggles, and the consequences of that.”

Staging “The Christians” on a modest budget ($35,000 across the venues) presented some technical challenges, particularly with the amplified sound.

“Part of putting the piece up in churches means there’s a level of discovery every time we load into a new space,” says Leah Adcock-Starr, the show’s director, who relates to the play as a “PK” (pastor’s kid). “A lot of churches were built preamplification. Or if they have their own sound systems, they’re meant for a service, not a play.”

But recent technical glitches didn’t mar the intensity of the performances, nor the power of a script that avoids stereotyping conservative evangelicals in progressive, nonchurchy Seattle. And it doesn’t grapple only with doctrinal concerns.

Even if you find Pastor Paul’s new outlook is more compassionate, one also feels Jenny’s pain: Faith has been an anchor in a rough life, and now it’s being questioned. Elizabeth’s shock and anger are also understandable. She was an active partner in her husband’s mission. But how can a marriage survive when one spouse is left out of a really important loop? Even Tautala’s fiery, doctrinaire Joshua is relatable. He, too, has been blindsided by his colleague’s change of heart.

“The play does a good job of raising the question of how much tolerance we can have. If we’re going to be accepting of everyone, does that include those who believe in things we don’t, like heaven and hell?” reflects Griffiths. Plymouth members have told her the piece “churned up a lot of feelings,” and one night a number of them stayed behind for an impromptu discussion with Healy.

While the title and venues may make some theatergoers leery, Healy asserts the play’s universal elements are particularly timely. “You can look at it as a play about meaty theological ideas, a play that makes you question your own assumptions,” he says. “Or you can see it as a heartbreaking story about a husband and wife who love each other but become spiritually divided, and a community at odds with itself.”

In an increasingly polarized America, he suggests, “I don’t think there’s a community that wouldn’t benefit from those conversations.”