Poll: Seattle voters want change on council and are split on Durkan

Disapproval of the city’s handling of homelessness is high as an election looms. 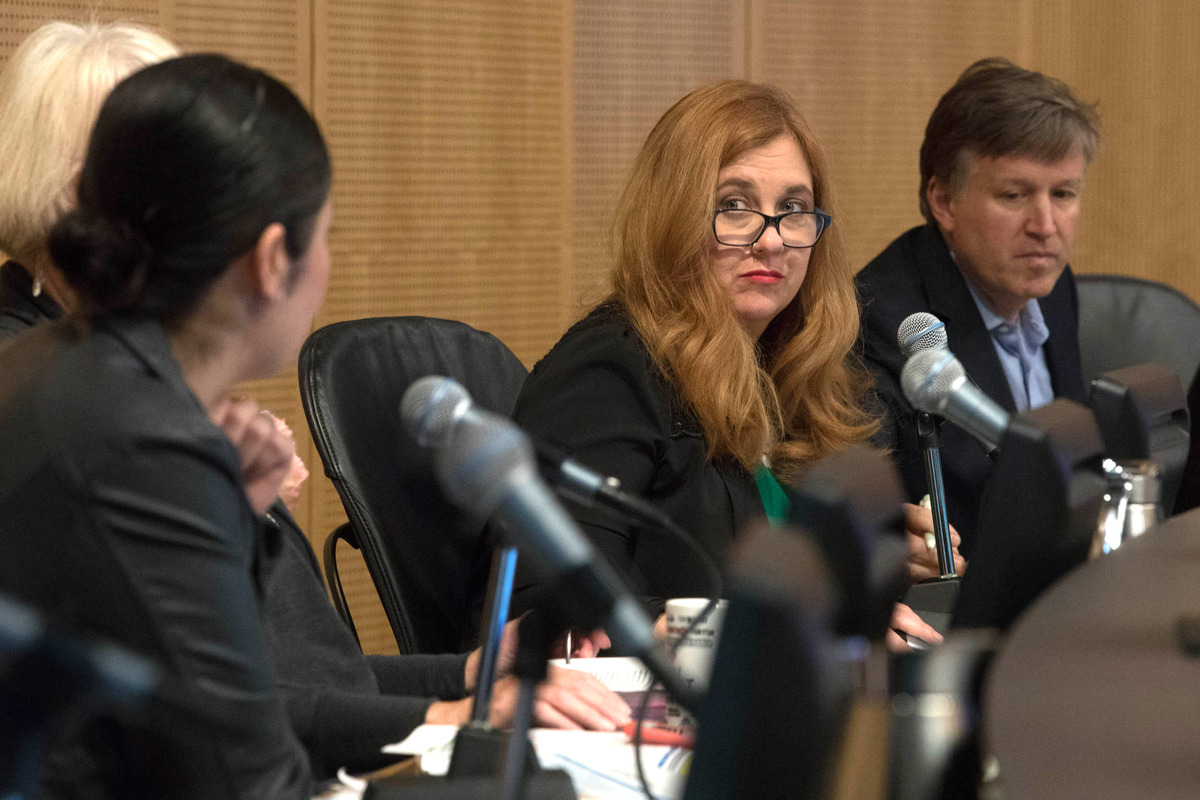 Councilmember Lisa Herbold is seen on the dais with other members of the Seattle City Council during a Select Budget Committee session in council chambers at City Hall in 2017. (Matt M. McKnight/Crosscut)

As Seattle heads into a November election that pits business-backed candidates against a set advocating more left-leaning policies, the current city council is significantly less popular than Mayor Jenny Durkan, according to a new Crosscut/Elway Poll. More than two-thirds of likely voters said they want candidates elected who will take the council in a new direction.

Voters’ number one issue is homelessness, by a wide margin: 53% said it was the most important. Housing density was second, with 17%.

And it appears it’s the city’s response to a yearslong rise in homelessness that’s dragging the council down. While city government received about 50% or better approval ratings on a range of issues, including transportation and police reform, just 30% of those surveyed said they approved of the council’s direction on homelessness. 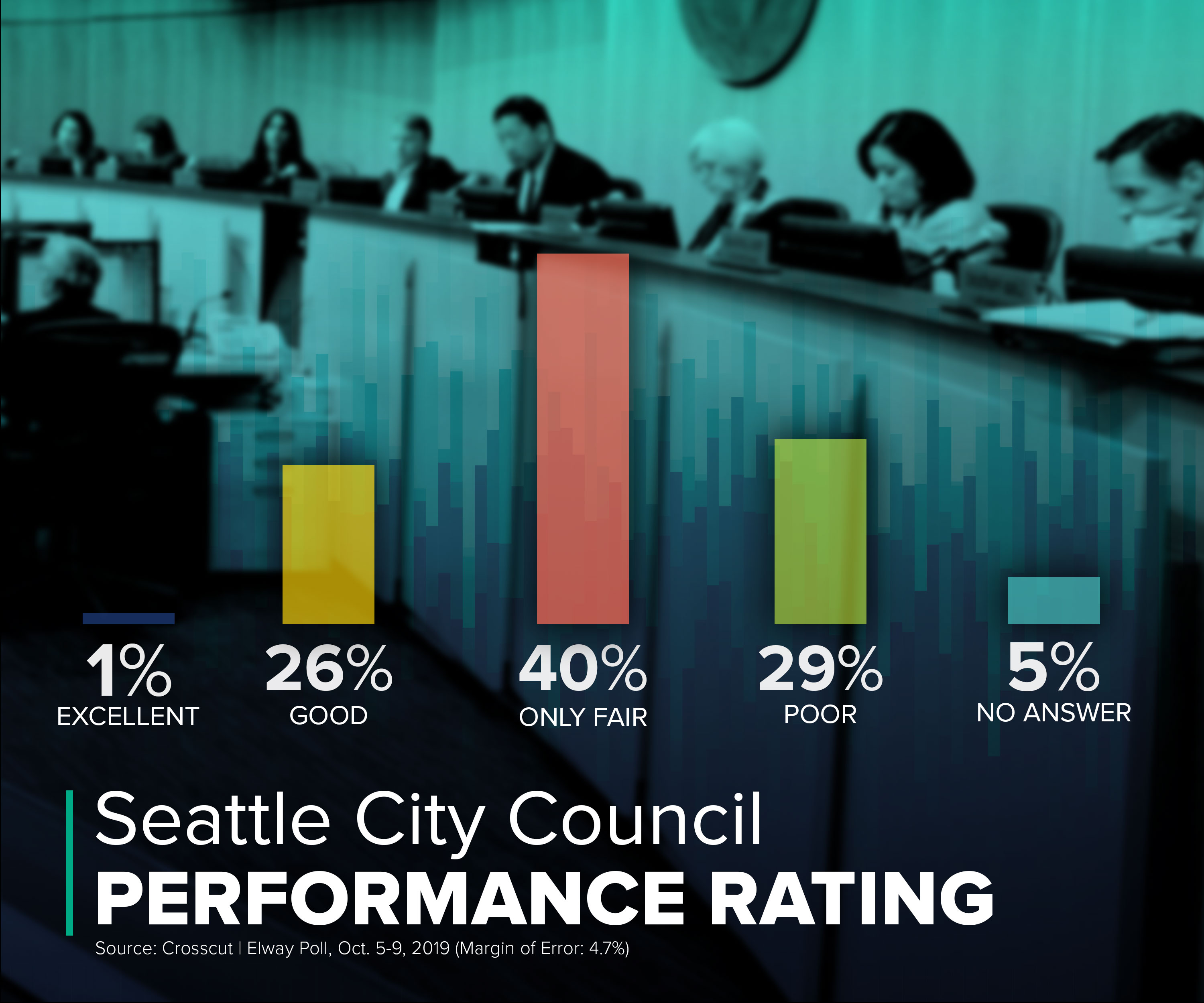 The council, said Justin Armintrout of District 3, which spans north and south from Capitol Hill, “has been a little liberal to the extreme.”

The Crosscut/Elway Poll did not ask voters about specific candidates or council members; achieving a large enough sample size from each council district was not workable. The margin of error is plus or minus 4.7 percent.

“What struck me is this widespread support for change, but not a change in policies, except for homelessness,” pollster Stuart Elway said. Elway suspects some of that desire for change could be rooted in the personalities on the council.

District 3 resident Matt Bruce said he supports the work of Councilmembers Teresa Mosqueda, who is not up for reelection until 2021, and Mike O’Brien, who isn’t seeking another term. Both are considered two of the council’s more left-wing members. “I think the council in general is pretty strong,” he said.

But Bruce is leaning toward voting for Egan Orion over incumbent Kshama Sawant. “I’m more kind of disillusioned with Sawant taking care of our district at this point,” he said.

For Molly Laster of District 2 in South Seattle, her number one issue is housing density, which has proved a flashpoint as city leaders have relaxed restrictions to allow construction of more apartments, condominiums and cottages in areas previously reserved for single-family homes. She would like the council to allow development in more places to make growth more equitable.

“I would say that there are efforts to do things that I think are valuable and worthwhile, like trying to address single-family zoning, that kind of go against course here in Seattle,” she said. “But the success for those things so far has been limited. I’d like to see more density.”

Durkan's term in office is not up until 2021. Meanwhile, the council has been a punching bag for candidates of all stripes in the months leading up to this November’s election.

With Durkan not up for reelection, the council appears to have shouldered more of the blame than the mayor for the perceived lack of progress on homelessness. Armintrout, the District 3 respondent, said he appreciates Durkan’s performance so far. “I feel like she has done a really good job at threading the needle of concerns of regular citizens around issues of homelessness, affordability, environment, with the needs and concerns of the business community and balancing both sides,” he said. “I think that’s a difficult thing to do in Seattle.”

When asked what kinds of people he’d like to see elected to the council, Armintrout said candidates “similar to Durkan.” 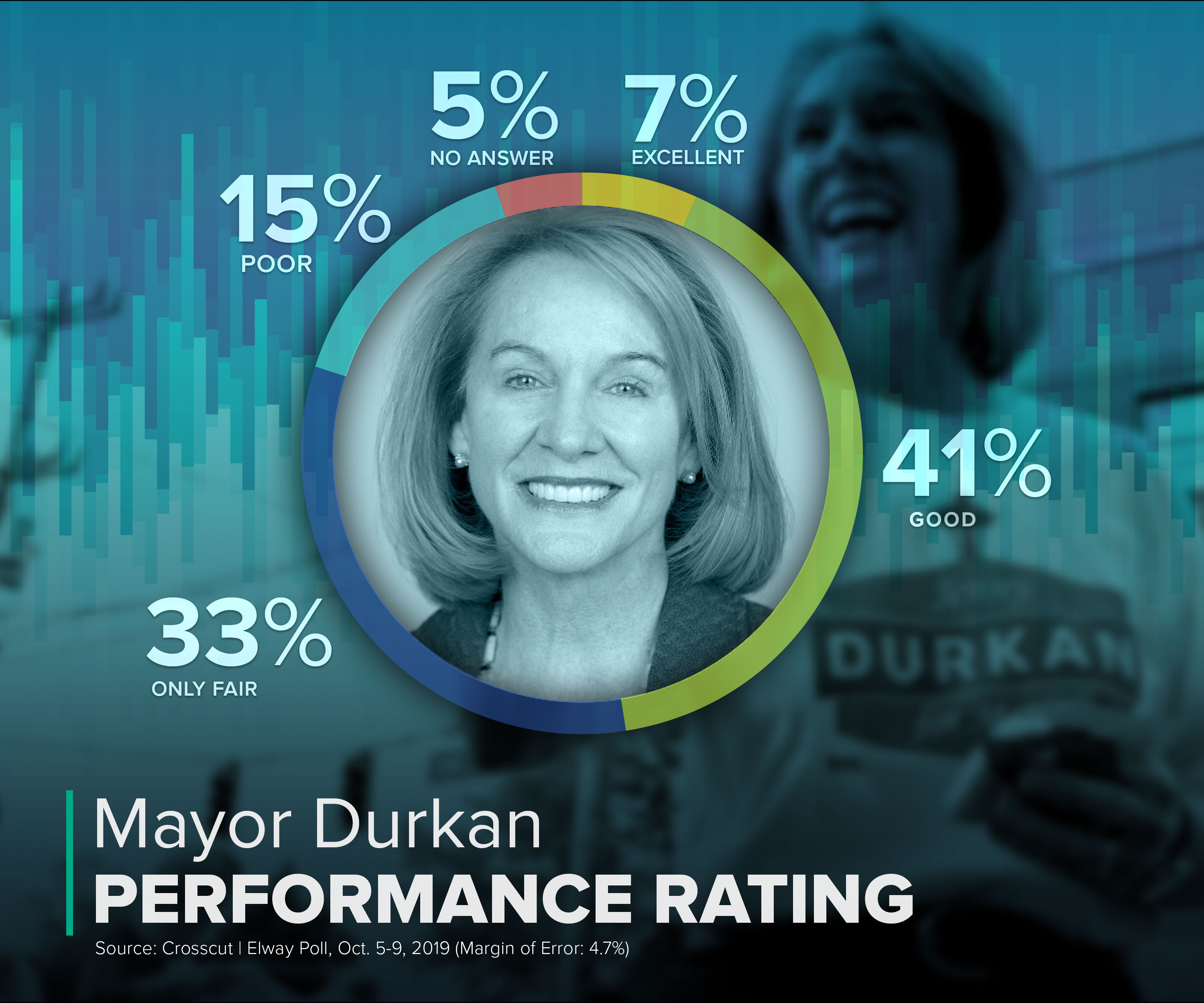 For some respondents, it’s the relative quiet surrounding the Mayor’s Office that buoys her numbers.

“I can’t point to any particular policy she’s enacted that’s been great or bad,” Riser said. “I kind of like the fact that I don’t really think about her. Given the current situation in the White House, I just want my leaders to lead and not create such chaos.”

Bruce said something similar. “My honest opinion is that the fact that things are relatively quiet in terms of scandal compared to everything else in this country is refreshing,” he said.

Laster, on the other hand, has been disappointed. “I expected her to be more progressive than she is and less business-focused,” she said. “That is a little disappointing, but it might just reflect the reality of our city right now in terms of who has influence.”

On two recent proposals from Durkan’s office, voters are split. Sixty-one percent said they supported a proposed 50-cent tax increase on Uber and Lyft rides, which would go toward affordable housing and connecting two existing streetcar lines through downtown. In interviews, several respondents clarified that they would only support the tax if it did not hurt drivers.

Just 40% of voters said they were confident that a new King County-Seattle approach to reducing homelessness would decrease the number of people experiencing homelessness.

With the city now split up into seven districts, the difference between a winning and losing candidate in November could be fewer than 1,000 votes — or even fewer than 100, as happened in West Seattle’s district in 2015. 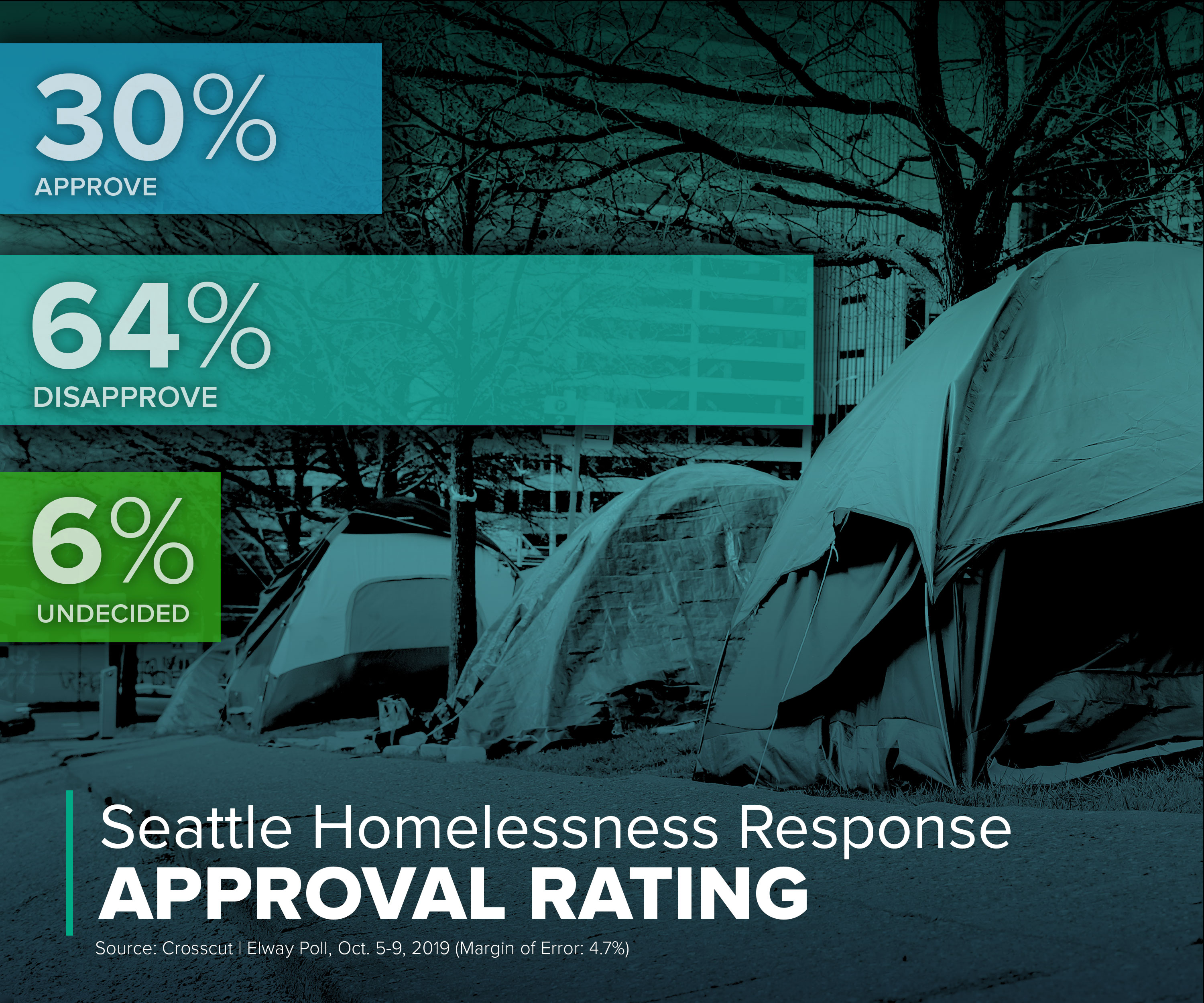 Voters were largely agnostic on the 2015 switch to a district-based system. Forty-two percent of respondents either had no opinion or said the switch had not made any difference. Thirty-four percent said it was an improvement from when all nine seats were elected citywide; 24% said it was worse.

Voters are calling for change, but, as Elway pointed out, they already have it: Four of the seven council incumbents finishing their terms did not run for reelection. “If all you want to do is change the faces, that’s going to happen whether you vote or not,” Elway said. “If just one incumbent loses, the majority is new and voila: Change!”

For his money, it all comes down to Sawant — most voters interviewed by Crosscut brought up the outspoken Trotskyite unprompted. “Sawant’s the bellwether,” Elway said. “If everybody’s new except for Sawant, people are not going to feel like this is a change election.”

About the Crosscut/Elway Poll: The survey was conducted among 432 “likely voters” in the city of Seattle. The interviews were conducted Oct. 5-9, 2019, by telephone with live interviewers; 63% of the interviews were conducted on cellphones. Likely voters were defined as having voted in the 2017 general election, the 2019 primary or both. This definition includes 55% of eligible Seattle voters. The margin of sampling error for this survey is ±4.7%. This means that, in theory, had this survey been conducted 100 times, the results would be within 4.7 percentage points of the results reported here at least 95 times. This survey was not designed to predict the election but to assess voter thinking about city government and issues facing Seattle as they decide how to vote.