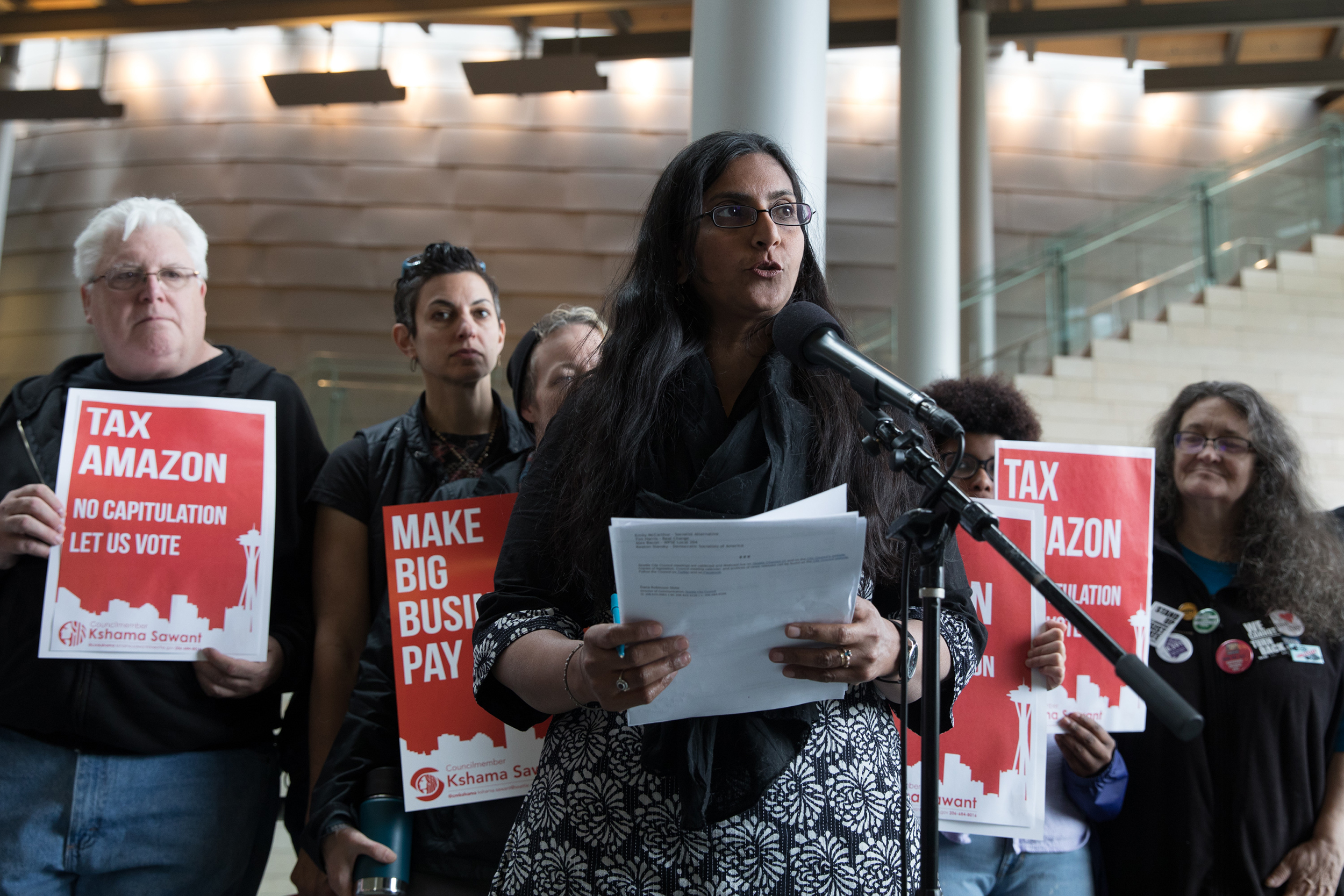 Amazon’s seven-figure spending meant to shape Seattle’s elections is prompting a new show of unity among progressive members of the city council.

On Friday, Seattle City Council members Lorena González and Teresa Mosqueda threw their support behind their outspoken council colleague, Kshama Sawant, the council's only member of the Socialist Alternative party. Sawant is locked in a tough reelection bid against business-backed candidate Egan Orion, a web designer and leader of Pridefest, a Seattle LGBTQ celebration.

The endorsements from González and Mosqueda come on the heels of a Thursday rally where both council members criticized Amazon’s unusual amount of spending in this year’s city council elections. The two council members’ support for Sawant marks a notable shift from the August primary election, when both Mosqueda and González endorsed another candidate, who didn’t advance to the general election.

So far, Amazon has donated $1.45 million to the political arm of the Seattle Metropolitan Chamber of Commerce, a group working to elect Orion and several other candidates seen as more friendly to business. The company donated about $1 million of that money this month, in the crucial final weeks before the Nov. 5 election.

In a Thursday tweet, Sanders decried how the company “dumped over $1 million into Seattle’s elections,” which the Vermont senator said was specifically to defeat “progressives who want corporations like Amazon to pay their fair share and end the city’s homelessness crisis.” Sanders said those progressive candidates include not only Sawant, but also Tammy Morales in District 2, Shaun Scott in District 4 and incumbent Councilmember Lisa Herbold in District 1.

Herbold has been challenged by attorney Phil Tavel, while Mark Solomon and Alex Pedersen are running for open seats sought, respectively, by Morales and Scott.

Warren, a senator from Massachusetts, similarly criticized Amazon's election spending, tweeting last weekend, “Amazon is trying to tilt the Seattle City Council elections in their favor,” and “I'm with the Seattle council members and activists who continue standing up to Amazon.”

In a statement distributed by Sawant’s campaign, Mosqueda directly referenced the company's recent donations as she urged voters to support Sawant.

“This election — stand with the workers and voters who demand their voices and votes count, and against the million-dollar check aimed at buying this election,” Mosqueda’s written remarks said.

“We can continue to fight for workers’ rights, and show that our democracy is not for sale,” she continued.

Mosqueda was not available to provide further comment Friday.

Amazon’s intense interest in the city council races comes a year after the council unanimously passed a per-employee “head tax” on big businesses, a policy Sawant championed. Shortly afterward, the council repealed the tax after seeing negative polling and facing the likelihood of a divisive referendum.

Amazon vigorously opposed the head tax, which surfaced as the company was planning to open a second headquarters outside of Seattle. The search for “HQ2” saw dozens of local and state governments compete to receive some of the Amazon jobs and money that have recast Seattle’s core during the past decade. Recently, Amazon has also announced plans to expand in Bellevue, raising concern in some circles that the rapidly expanding retail and cloud computing giant may have had enough of Seattle’s progressive politics.

Sawant and Mosqueda were the only council members who voted to keep the head tax in place last year. Mosqueda and González are not up for reelection until 2021, when Mayor Jenny Durkan’s term also expires.

Sawant’s relationship with other council members has been contentious, and her colleagues haven’t always been on her side.

That showed earlier this year, when González and Mosqueda endorsed Zachary DeWolf, a Seattle School Board member, over Sawant. DeWolf came in fourth in the primary election, so he won’t appear on the general election ballot.

“With Amazon fighting all of us, it’s not about whether you’re a Democrat or a socialist,” González said in prepared remarks released by Sawant’s campaign. “What matters is our movement, our call to build a more just city, fundamentally built on our progressive values.”

Reached by phone, Gonzalez said "the massive influx of corporate dollars into this election cycle" played a role in her thinking. But beyond that, González said she and Sawant have also had "several conversations" since the primary election that have made her feel more confident about their ability to work together in the future.

"I think those conversations have been really productive, and given me an opportunity to really see where we can collaborate," González said.

The two legislators have also joined Mosqueda and González in endorsing Scott, the candidate who identifies as a democratic socialist in the District 4 race. Pedersen, Scott's opponent, is the chamber's preferred candidate, and has benefited from more than $50,000 in spending by the committee that got the $1.45 million from Amazon.

Scott announced the new slate of endorsements on Twitter on Friday and Monday.

This post has been updated to reflect additional candidate endorsements that were announced after the story's initial publication. 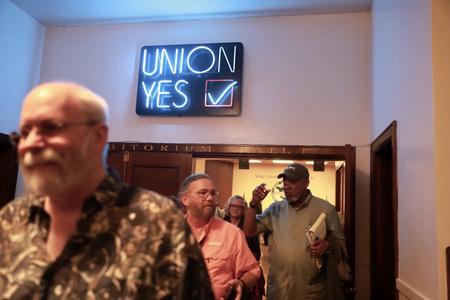 After winning an endorsement from the King County Labor Council in 2015, the incumbent council member loses it this year to Zachary DeWolf.

After winning an endorsement from the King County Labor Council in 2015, the incumbent council member loses it this year to Zachary DeWolf.