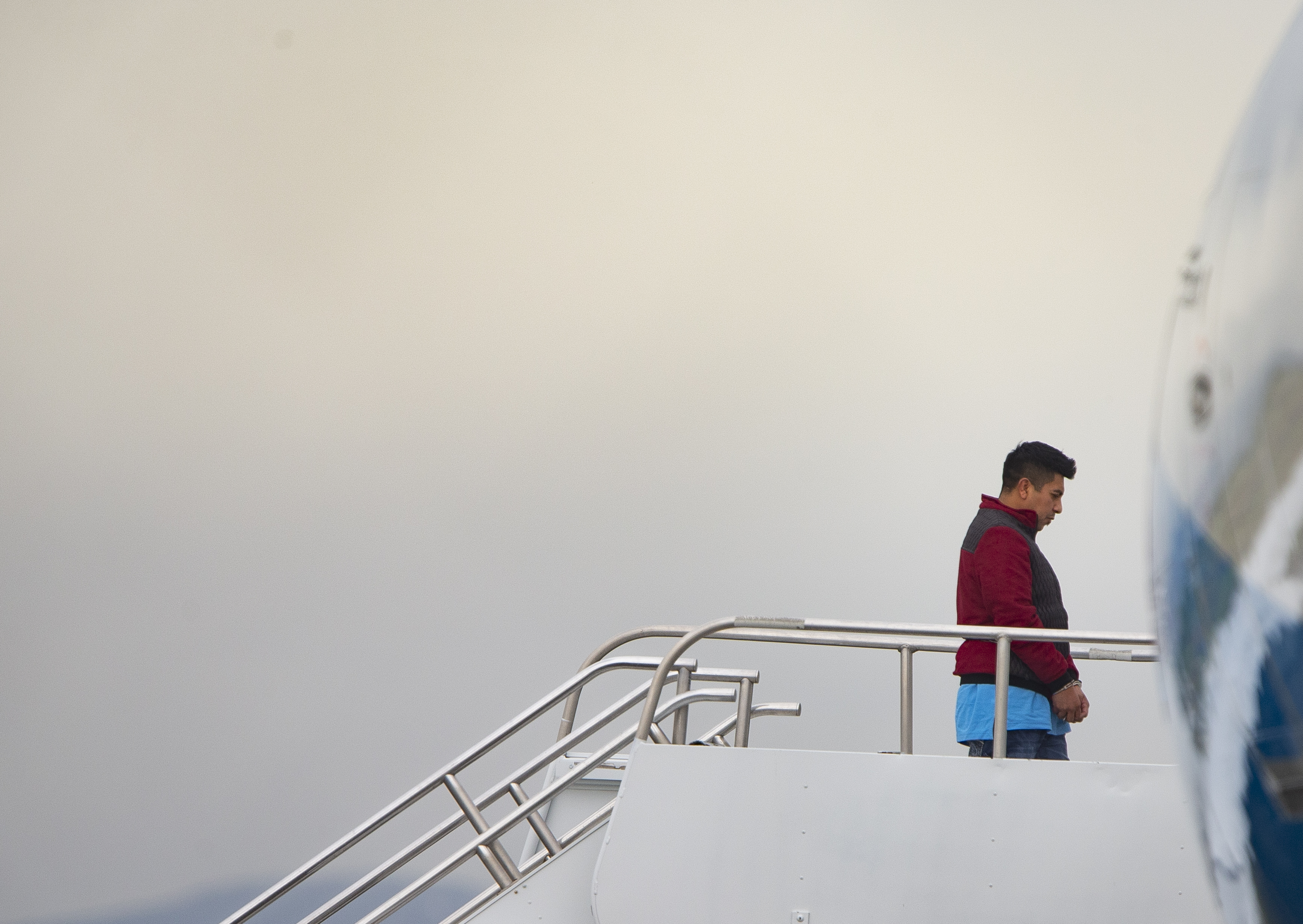 A shackled ICE detainee boards a government-chartered Swift Air flight bound for Las Vegas at the Yakima Air Terminal on May 14, 2019. Detainees were bused in to Yakima from the Northwest Detention Center in Tacoma. (Lindsey Wasson for Crosscut)

In April, federal officials tasked with deporting dozens of detained immigrants a month found they had a problem.

King County leaders, ahead of a report by the University of Washington Center for Human Rights revealing that 34,400 detainees had been deported from Boeing Field from 2010 to 2018, had closed the region’s largest charter airport to Immigration and Customs Enforcement. ICE's detention center in Tacoma housed hundreds of immigrants slated for deportation to Mexico and points south, and managers there needed to make space for hundreds of asylum seekers.

Searching for local governments willing to let “ICE Air” fly, regional leaders with the embattled agency looked north and east. The response from Bellingham and Everett was tepid. In Yakima, though, ICE found a willing partner.

Since spring, ICE and its contractor at the Tacoma detention center have been loading detainees onto buses, driving them to Yakima Air Terminal and putting them on chartered planes headed for hubs closer to the U.S.-Mexico border. ICE officials often then reload the buses with asylum seekers headed back to the Tacoma facility, now known as the Northwest ICE Processing Center after changing its name from the Northwest Detention Center. Many there wait months for their asylum claims to be reviewed.

This exchange, which happens more or less weekly, is less than ideal for all concerned. On a recent media tour of the newly renamed detention center, Nathalie Asher, who heads ICE's enforcement and removal operations, said she worries about officers driving detainees over the Cascades during winter.

Danielle Surkatty of the Yakima Immigrant Response Network said she and others, including local pastors and their congregations, have watched officers transfer detainees, some clad in short sleeves and shorts in cold weather. Surkatty questions whether ICE and GEO Group, the private prison company that operates the detention center, can keep the buses running through winter.

“We're all wondering what ICE/GEO Group is going to do when the snow falls on the passes and whether or not that will be an impetus to move the flights back to the west side somewhere,” Surkatty said.

Internal email exchanges obtained by the UW Center for Human Rights through public records requests demonstrate the contentious relationship between ICE and the local government-run airports on which it relies. Despite objections from some community members, Yakima officials have said they had no choice but to cooperate with ICE. Failing to do so, they worry, could jeopardize federal funding for the city-run airport while also inviting administrative action like that facing King County.

Former Yakima City Manager Cliff Moore pointed to both the airport’s agreement with the Federal Aviation Administration and the airport’s lease with McCormick Air Center, the company that supplies planes that land there with fuel, maintenance and other services. The lease notes that the “lessee agrees to comply with all applicable laws … of all governmental authorities having jurisdiction over the airport.”

“We would essentially be saying to [McCormick Air Center] that you have to violate your contract,” Moore said in May. “Regardless of how I feel about it personally, I don’t see that we have much of a legal leg to stand on.”

Moore said he feared the approximately $18 million in federal grant funding the airport has received in the past eight years would also be at risk if the city followed in King County’s footsteps.

Interviews and records obtained by the UW’s Center for Human Rights and Crosscut, however, show ICE has approached at least two other airports about handling deportation flights but that, as in King County, officials at both have rejected the federal agency’s offer.

When asked what airports the agency had approached, ICE spokesperson Tanya Roman would only say: “ICE used many factors to determine the best airport to utilize for ICE charter flights. Some of these factors include detainee safety, airport accessibility and cost to taxpayers. Based on these factors, ICE maintains that utilizing [Boeing Field] is the best option.”

On May 3, days before the first ICE flight to Yakima, Katrina Martin, an airport operations specialist in Snohomish County, wrote in an email: “Team, Deportation Officer Darren Renner who plans the ICE Air Flights is trying to plan a flight through Paine Field on Tuesday.”

The next day, Bruce Fisher, deputy director of operations at Paine Field, responded, saying, “All: word from downtown is to let Arif handle any further comms with ICE. We'll stand down. Call me with any questions. Thanks, Bruce.”

In response to questions, Arif R. Ghouse, the airport’s director, denied having direct conversations with ICE, but reiterated the same argument officials in Yakima have used to defend the practice of operating such flights.

“Under federal law and FAA policy, we are obligated to allow the federal government to use the airport. As a public facility, we cannot discriminate against users of the airport,” Ghouse wrote in an email to Crosscut.

Ghouse referred questions about why the airport had opted to not service such flights to Castle & Cooke Aviation, the company that services the planes.

Phillipe said she told Lawrence the airport was not well-equipped to handle such flights because detainees would have had to use the same loading area that commercial passengers use.

The only deportation flight Bellingham has on record is one from Nov. 20, when severe fog at Seattle-Tacoma International Airport caused a U.S. Customs and Border Protection charter Swift Air flight to land there, said Michael Hogan, a spokesperson for the city.

Randy Beehler, spokesperson for the city of Yakima, said city officials are aware that ICE is “trying to explore other options because the transportation of folks over here back and forth is not the best situation for them.”

So far, 1,300 detainees have been flown out of Yakima airport while 1,100 have flown in to the airport, Beehler said. The city has made approximately $16,000 from the 32 flights that have landed and taken off in Yakima since May. For each flight, the airport charges approximately $200 in landing fees, $60 for air stairs and another $200 for airport operations and security.

Although Beehler said the city maintains it had no choice but to cooperate with ICE, records show that officials also expected to have the cooperation of local law enforcement, which have helped oversee the flights.

On May 2, Robert Peterson, the airport’s director, wrote Paul Sottosanti of Classic Air Charter, which helps manage charter flights and subcontracts with such other companies as Swift Air and World Atlantic Airways to operate the flights: “As you get closer to a decision, I believe it would beneficial to update our local Law Enforcement Office as I’m confident they will welcome you with open arms.”

The next day, Greg Franchetti of Classic Air Charter wrote back, noting that Yakima Air Terminal “has no issues with our ICE mission operating into and from KYKM [Yakima Air Terminal]. We appreciate your cooperation.”

“It was a very cryptic, sterile conversation,” Miller said, explaining that the call had been more about logistics.

“We would look at everything with open eyes,” Miller said. “We’re open to talking to anybody.”

“If they called again we would have another conversation with them,” Miller said.

But, Miller added: “A lot of times they’re shopping around and looking at other airports, too.”

In contrast, earlier this year, all three of King County International Airport’s fixed-base operators — companies that service the flights — opted to stop working with ICE after King County Executive Dow Constantine announced he planned to halt such flights at the county-operated airport.

Asher’s August letter noted that Castle & Cooke Aviation, the company that services planes at Paine Field, also refused to do business with ICE.

“No written reason was given for this refusal,” the ICE enforcement chief said in the letter.

A separate letter from Classic Air Charter addressed to ICE specified Castle & Cooke Aviation had refused to help operate deportation flights due to "current political pressures." The letter said the aviation company was, however, open to working with ICE in the future.

Referring to Boeing Field, Asher went on to note: “As the airport in question here is a publicly owned and federally funded airport, ICE requests an investigation into the airport’s noncompliance with their applicable federal obligations."

Barbara Ramey, senior communications specialist at King County, says the county plans to respond to the complaint by the end of the month.