The $750,000 proposal would help those unable to work avoid homelessness once their state payments are replaced by smaller federal payments, a so-called ‘benefits cliff.’ 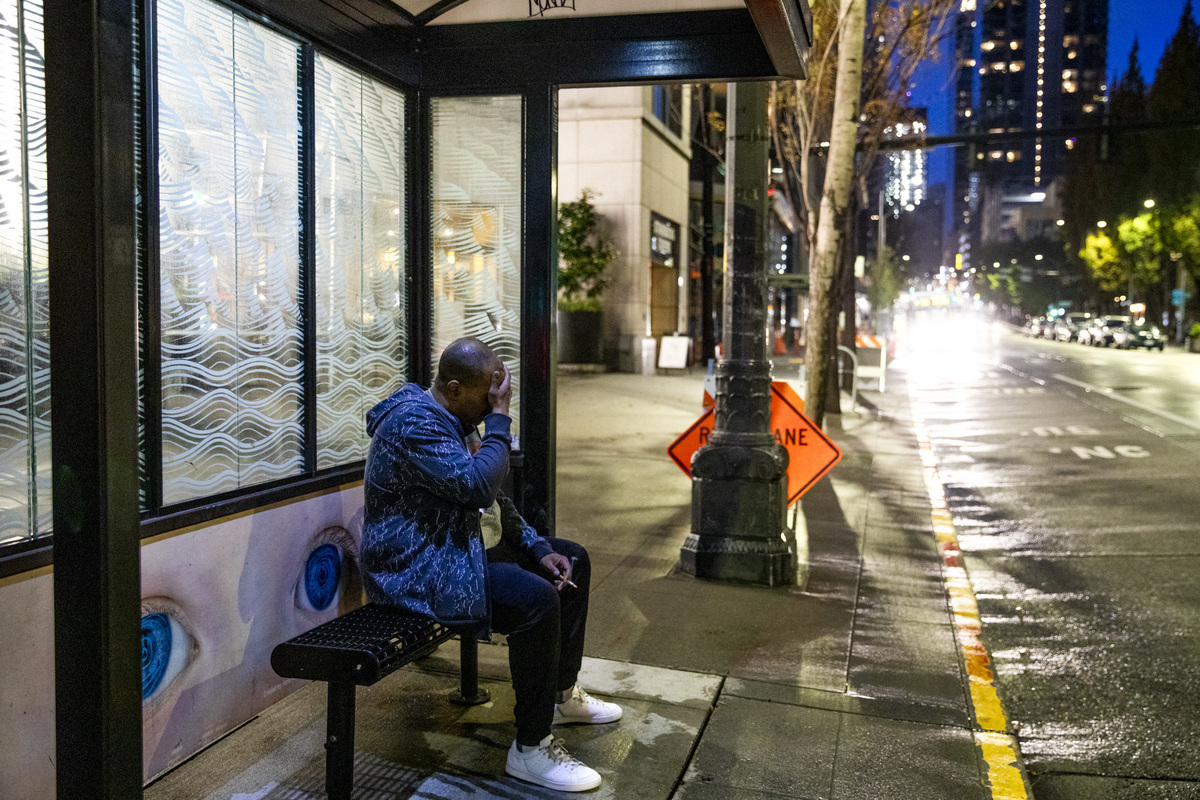 Dwight Williams, 51, waits for the bus in the early morning hours in downtown Seattle on Sept. 18, 2019. After qualifying for federal disability income earlier this year, Williams lost his state housing benefits and could no longer afford his rent. (Dorothy Edwards/Crosscut)

As rents in King County have grown over the past decade, housing has become further out of reach for those on federal disability income. Now, several members of the Seattle City Council want to help close that gap for people struggling to get out or stay out of homelessness.

At $750,000, the “Homes for Good” proposal, sponsored by Councilmembers Lorena González and Lisa Herbold, would be a pilot program to be expanded later if successful. In its first year, the program would aim to help between 70 and 100 people with disabilities who are living on a fixed income or facing the prospect of having their state-provided subsidies replaced by smaller federal disability payments, a so-called “benefits cliff.”

The city’s effort would be what advocates call a “shallow subsidy” intended to reinforce a porous safety net.

“It really is designed to address the benefits cliff issue by looking at a rental subsidy program that will allow for people to continue to stay housed after finding housing stability,” said González. She added, “I think that shallow subsidies really meet that segment of the population experiencing homelessness that isn’t sick enough or dependent enough to get free and ready access to all of the services available that we fund through public programs.”

The first story showed how, as the cost of living has skyrocketed, federal disability income has lagged, weakening its value as a path out of homelessness.

The second profiled one man, Dwight Williams, who returned to homelessness after he lost state benefits as a result of qualifying for federal disability assistance, leaving him unable to afford his rent. Williams’ story is a common one, according to local housing providers.

Housing advocates have been talking for years about the gap between federal benefits and the cost of living and how that forces people on fixed incomes into homelessness. In recent weeks, many of those same advocates have pointed to Williams’ story as proof positive of why extra subsidies are necessary, and council members have taken an interest.

“It is a simple idea. The point is these are folks who really the difference is a few hundred bucks a month and that’s it,” said Alison Eisinger, director of the Seattle/King County Coalition on Homelessness.

The proposed program would be targeted toward individuals over 50 years old who are earning less than $1,000 a month on federal disability and who are either homeless or at risk of returning to homelessness. The average benefit would provide an additional $473 a month to qualified recipients.

For those currently struggling with homelessness, the extra money would hardly be a path to luxury. But it would narrow the leap required to find housing.

“We’re not talking about anything like market rate [housing],” said Eisinger. “We’re still talking about a creative arrangement and otherwise subsidized units. But I think the point is to recognize, if we don’t want people on the streets, what we need to do is make rent affordable, given what people’s current wages and benefits are.”

The added money could have a particularly pronounced benefit for formerly homeless people who have found housing through temporary state benefits. Those benefits disappear once a person qualifies for federal disability. And because the federal benefits are less valuable than the state’s, the switch can put once-affordable housing out of reach.

This is what happened to Williams.

“We’ve been hearing whispers from the community that this benefits cliff is real and tangible for more people than we appreciate,” said González. “So I think it’s important for us to get in early on the front end to mitigate the issues and the earlier we do that the better.”

Co-sponsor Herbold said providing the shallow subsidies for people who don't need intensive services frees up other resources for people who need more intense interventions. "We could use permanent supportive housing for the people who actually need it and make those dollars go further while also helping a population of folks who are falling through the cracks otherwise," she said.

Despite an initial positive response to the proposal, its passage is not guaranteed. The council is in the process of amending Mayor Jenny Durkan’s proposed budget and scratching together dollars for each council member’s favored issues is competitive.

Eisinger, though, said she’s “cautiously optimistic” this one will survive. “There is absolutely no question the rents are too high, the benefits are too low, people need homes and we have proof that this works,” she said.