Immigration advocates are asking that the Tacoma City Council revoke the business license of GEO Group, the private company that runs the Northwest ICE Processing Center. 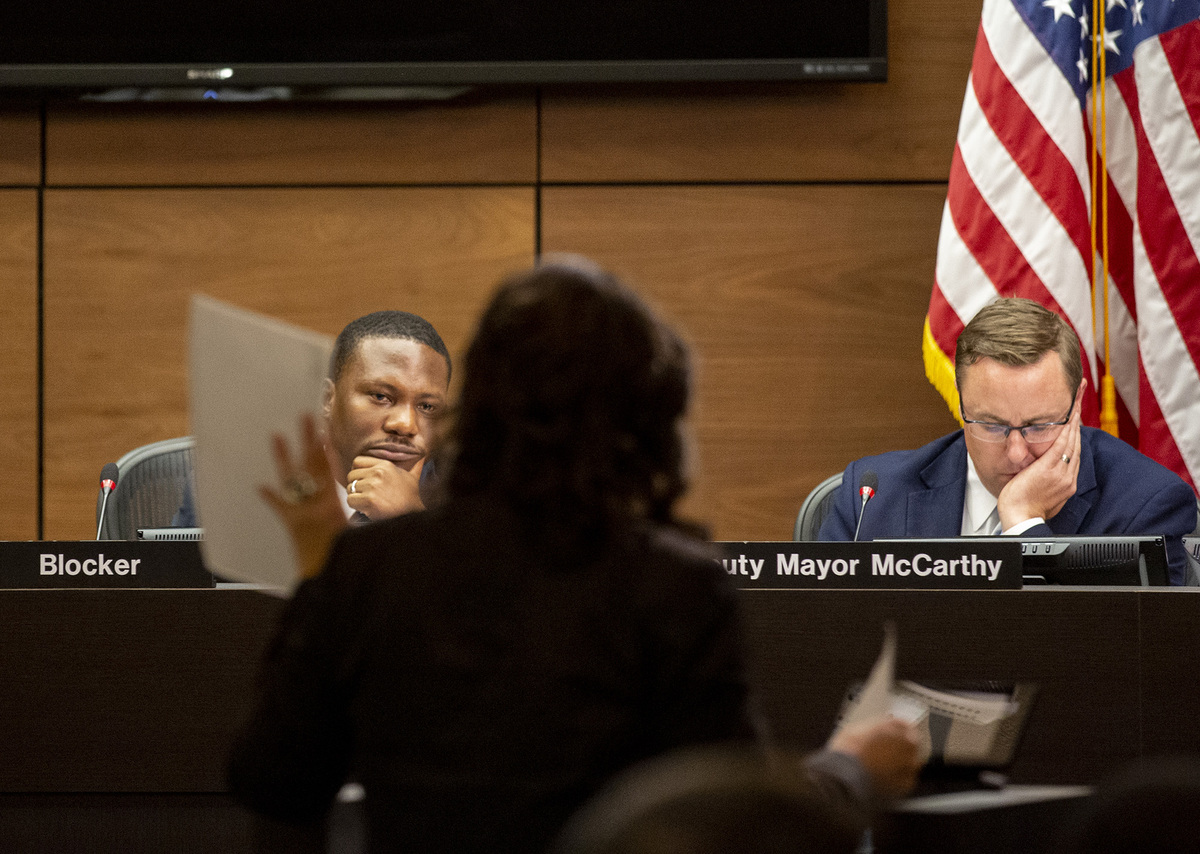 But the activists who packed the council chambers continued pumping their fists and shouting, “Shut it down! Shut it down!” Frustrated, Woodards announced she and city council members would take a 10-minute recess.

With the microphones off, Monserrat Padilla continued to address the crowd about what would become the focus of Tuesday night’s council meeting — closing the Northwest Immigration and Customs Enforcement Processing Center, previously known as the Northwest Detention Center.

The national conversation on the banning of private prisons and detention centers has emboldened Washington activists. Most of the approximately 40,000 immigrants in custody each day are held in privately owned prisons, and activists see the opaque detention centers as a key enabler in the Trump Administration's push to lock up immigrants waiting for deportation or their day in court.

Once focused on simply improving conditions, some advocates now say they won’t stop short of seeing private, profitable facilities closed. Over the summer, protesters, including members of the Jewish community, gathered in front of the ICE office in downtown Seattle to call for the agency’s dismantling.

This week, activists launched an effort focused on pressuring the Tacoma City Council to declare the Northwest ICE Processing Center a public nuisance and revoke the business license of GEO Group, the company that runs the detention center.

Earlier in the day, activists outside the Tacoma Municipal Building argued that officials could shut down the center like any business that proves to be a bad neighbor.

Maru Mora Villalpando of La Resistencia, a group that has long been outspoken about conditions at the detention center, said she recently received reports of maggots and a screw in food served there, as well as blood on a plate. Villalpando also pointed out that city taxes pay for police and medical responses to the frequent 911 calls from the facility.

The Northwest ICE Processing Center has seen its fair share of controversy. Last year, Mergensana Amar, a Russian asylum seeker, killed himself at the detention center. In July, police fatally shot an armed protester, Willem Van Spronsen of Vashon Island, at the facility.

“We’re not going to wait for Trump to be impeached or maybe the Democrats to get back into office. That’s not the solution. The solution is in Tacoma’s hands,”  Villalpando said.

Tacoma City Council members, however, say doing anything at all about the detention center, much less revoking its business license, isn’t as easy as immigration advocates make it sound.

“We don’t have the legal authority to shut down a federally funded facility so that’s the challenge,” Councilmember Keith Blocker said. “We can’t even pull their business license. They’ll argue we have no reason to pull it.”

Unlike other cities with detention facilities, Tacoma does not have a contract with ICE or GEO Group, Blocker said. The city council, he said, never provided authority to open the facility or voted in favor of it. One council member, Blocker said, wrote a letter in support of the facility. Other than that, the city simply provides a business license.

But in fact, Tacoma City Council did unanimously approve the proposed detention center in 2000, noting the new facility would create "hundreds of family-wage job opportunities.”

Loretta Cool, spokesperson for the Tacoma Police Department, said approximately 300 calls to 911 have come from the facility from 2018 to date. Most calls are for medical help. Police have responded to about 25 assaults, including sexual assaults, as well as several suicide attempts, Cool said.

In 2017, lawyers for GEO Group responded to a letter from Tacoma’s previous mayor — Marilyn Strickland — assuring her and other city officials that the company “will not engage in any activities that constitute violations of any local, state and federal laws.”

But Anita Gallagher, assistant to the city manager, concedes the facility should be inspected more regularly and that city officials have little knowledge of its day-to-day operations.

“We don’t even have visibility in that facility aside from the structured tours,” Gallagher said.

GEO Group, a private for-profit prison company, has lobbied government officials, pushing for stricter immigration policies and greater levels of detention. Because GEO Group is private, little is known about its standards or policies for facilities. A lawsuit filed against the company by Washington state Attorney General Bob Ferguson for paying detainees less than the minimum wage continues to drag on.

“GEO Group is a private organization that probably has a budget that is bigger than the city of Tacoma,” Blocker said.

Given what the city knows now, pulling the facility’s business license would be an uphill battle, Blocker said.

“What people are asking us to do is snatch a business license when we don’t have the authority to do so,” the council member said. “We will get sued. We’re already being sued.”

That lawsuit was filed last year after the city blocked GEO Group from expanding the facility. The company argued that under state law the detention center qualifies as an “essential public facility,” and that city regulations violate the state’s Growth Management Act.

A state land use board has twice ruled in the city’s favor, noting that “essential public facilities” refers to “state and local correctional facilities,” not federal ones. Tacoma officials, however, expect GEO Group to appeal those rulings. Gallagher said she and other city officials are interested in introducing state legislation that would settle the “essential public facility” question once and for all.

Blocker argued activists should bother legislators, not the city council, if they’re interested in closing the detention center.

Blocker said another lawsuit from GEO Group against the city could drain funds that pay for a myriad of services, including assistance to homeless residents.

“One thing I can say about the city of Tacoma in my experience, we do a really good job at evaluating risk,” Blocker said. “We don’t pick fights that we know we’re not going to be able to win.”

“We can only do what we can do,” he continued. “Right now, at this point, we’re being as creative and innovative as the law will allow.”

This story has been updated to note Tacoma City Council voted in favor of building the detention center in 2000.