Seattle choreographer Dayna Hanson in a previous production of Ten Tiny Dances, in which dancers must complete an entire work on a short, 4' x 4' stage. (Photo by Kate Haley, courtesy On the Boards)

Lit Crawl, Seattle’s annual literary pub crawl is back — with the tagline “Get drunk… on words” — and more than 80 writers doing live readings and performances at bars, restaurants, coffee shops and bookstores across Capitol Hill. Themed clusters of readings include: “A Woman’s Work: Reading About Work and Labor” (Intrigue Coffeehouse, 5 p.m.); “Poems to Scare the Hell Out of You” (Capitol Hill Cider, 6 p.m.); a group of Hedgebrook alums, including Ellen Forney and Kathleen Alcala (Capitol Hill Cider, 7 p.m.); “Surreal Storytelling by Strange Women” (Corvus & Co, 8 p.m.); a group of “lit” local poets, including Quenton Baker and Jane Wong (Spin Cycle, 8 p.m.); cookbook writers with exemplary snacks (Elliott Bay Books, all evening); and “House of Ink,” an improvised, interactive murder mystery (Hugo House, 7 p.m.). Everything pairs perfectly with one of the evening's Edgar Allan Poe-inspired cocktails (available at several of the 21+ venues). –B.D. & M.V.S

Quincy Jones, Jimi Hendrix, Ernestine Anderson, Sir Mix-A-Lot — the Central District’s music pedigree is pretty spectacular. This week’s pick from the ongoing Earshot Jazz Festival pays tribute to that rich heritage by way of a contemporary cohort. Called the “The Folks Project,” this concert and discussion features a trio of beloved local jazz musicians (drummer D’Vonne Lewis, keyboard player Darrius Willrich and bass player Evan Flory-Barnes) who’ll play music by several of their regional and rhythmic predecessors. The live concert will be accompanied by a panel conversation about local legends of the genre, led by Dr. James Gore, founder of the Jackson Street Music Program and Jazz in the City.

Do you have your costume ready? Do you have enough candy for trick-or-treaters? But what about the looming threat of tooth decay? If Halloween feels more stressful than spooky, run screaming away from it all and go out for a show. Cinerama turns “Horrorama” (Oct. 25-31), screening movies from classic slashers (Psycho, Halloween) to murderous invaders (The Thing, The Birds) to the truly terrifying (The Exorcist, Silence of the Lambs). For live undead entertainment, ACT Theatre presents a fresh take on the man with insatiable teeth, Dracula (through Nov. 17). Local playwright Steven Dietz has given the age old tale an update (now, with more women’s empowerment!). If you prefer to tingle your spine with a little bump and grind, consider Can Can Cabaret’s burlesque boo-tyfest, Zombie Cheerleaders from Hell (through Nov. 3). Seattle Radio Theater takes the fully clothed option, with a live radio stage play of 1948 noir thriller Sorry, Wrong Number at Town Hall (Oct. 29). SIFF Cinema Uptown goes goth with the madmen in The Lighthouse (Oct. 24-31), including a preshow discussion of gothic horror on Oct. 27. Or simply drag your reanimated corpse to Century Ballroom from for the annual Halloween Disco (Oct. 31), where all that’s required is doing the hustle. –B.D.

If you go: See embedded links for listing info.

“House prices can only go up.” “Banks are too big to fail.” “Robots will steal our jobs.” These are just some of the contagious stories we tell, have told or have been told in modern-day American culture. As Robert Schiller demonstrates in his new book, Narrative Economics: How Stories Go Viral and Drive Major Economic Events, many such stories are often false, though that doesn’t stop them from influencing our economy. Schiller, a Yale professor, Nobel Prize laureate and prescient foreboder of the dot-com and housing bubbles, comes to Town Hall to make his case about the importance of stories in economics — even in the era of big data. “Trying to understand major economic events by looking only at data,” he argues, “is like trying to understand a religious awakening by looking at the cost of printing religious tracts.” –M.V.S.

Four feet by four feet. Measure that out on the floor, then try a twirl or two within the lines. It’s a remarkably confined space within which to stage a dance performance, but then that’s the whole point. Originally conceived in 2002 by Portland choreographer Mike Barber, Ten Tiny Dances brings to life the old adage that constraint breeds creativity. With the founder’s blessing, the simple, raised 4’ x 4’ platform has been replicated at venues across the country, sparking innovative takes from taut tango dancers to performers who pile towers of even tinier stages on top. In this year’s Seattle edition, the challenge has been taken up by ten formidable performers, including the poet scientists of Vis-à-Vis Society; veteran choreographer/composer duo Scott/Powell Performance; drag artist Arson Nicki; longtime Seattle dance maven KT Niehoff and dancer Cheryl Delostrinos of Au Collective. All the audience has to do is keep your arms and legs inside the aisles. –B.D.

Parenting lifestyle coach Burl Dirkman has a penchant for tropically patterned dress shirts and the Comic Sans font. He owns a “criary” (a crying journal), once fronted a Creedence Clearwater Revival cover band and, he’ll tell you in his soft Southern cadence, hopes to spread “the healing power of babies.” He’s also the alter ego of Seattle comedian Brett Hamil, who plays the character as endearingly funny and emotionally vulnerable. Hamil says the act aims to restore what he calls the craft of comedy’s true vocation: bringing joy. In Burl’s wondrous universe, nobody’s the butt of the joke, except perhaps the farting manatees featured in one of his earnest, typo-filled slideshows. During Burl’s first full-length show, expect live ambient music, uplifting YouTube videos, absurdist slideshows and an interview with KEXP DJ Riz Rollins about, among other things, feelings. –M.V.S.

Speaking of ghost season, a certain hulking chunk of infrastructure has suddenly (or at long last) disappeared — but the absence of the double-decker byway is so fresh, its image still persists in our minds, a phantom limb. Which is why it’s the perfect time to check out Seattle-based watercolor master William G. Hook’s new show, which chronicles the Viaduct’s demolition. Having spent 40 years as an architect and architectural illustrator prior to picking up a paintbrush, Hook brings a meticulous level of structural detail to his images of a road on its way to nowhere. He paints the rebar poking out of busted concrete like wiry hair, the puffs of dust raised by falling debris, and the machines that ate the Viaduct alive, their metal mouths like dinosaur maws. The body of work stands as careful documentation of a changing environment: this was here, and now it’s not. But the soft hues of the watercolors make it seem like maybe it was all a dream. –B.D.

If you go: William G. Hook at Zeitgeist Coffee in Pioneer Square, through Nov. 6. (Free.)

One of Shakespeare’s final plays, The Tempest reveals the full breadth of his gifts, with an engrossing saga of revenge and forgiveness, power and revolt, on an island where magic is afoot. While most productions prove their mettle in the central drama of Prospero, the deposed royal who has mastered the dark arts to get even with those who schemed against him, this Seattle Shakespeare Company staging by Annie Lareau is most satisfying in the comedic moments. The antics of the tipsy butler Stephano (Peter Dylan O’Connor) and jester Trinculo (Amy Escobar) — stranded on Prospero’s island apart from their masters and mixing it up with the slave creature Caliban (Christopher Morson) — are nimble and richly amusing. And while it takes a little getting used to, Lareau’s novel choice of turning Prospero’s fleet slave Ariel into a chorus of archetypal circus performers pays off, too. Otherwise, the production’s gender bending is less a revelation than just fine (Mari Nelson plays Prospero and some of her adversaries are also portrayed by women). After a bombastic opening, everyone settles down to greater vocal clarity. But it’s the high jinks that are most memorable, along with a production design partially lit by chandeliers that reflect flashes of genuine magic. –M.B.

Walk by Mad Art Studio these days and it looks like one of so many under-construction buildings in South Lake Union. The Westlake Avenue facade is covered in blue polyester netting. Called “debris netting” in the biz, it’s supposed to protect passersby from errant chunks of drywall or dropped tools, but also sends a message of “don’t look at this.” If you take a second glance, however, something entirely intentional emerges — the wide glass doors of the space are thrown open, and newly installed steel ramps entice visitors to enter into a geometric blue tunnel that angles around blind corners. Called Lure, the new installation is the work of Dream the Combine, an artist/architecture group from Minneapolis that collaborated with Seattle-based artist/engineer Clayton Binkley. At the opening, Combine’s Jennifer Newsom said the intention was to “veil or ghost the outside of the building, and create an image you can actually step into.” The zigzagging hallways of netting also cause participants to appear ghostly, or pixelated, as they move through the corridors. In a neighborhood where blue badges are required to gain entry to many buildings, the open invitation of gaping doors is a bit unsettling. “We’re looking at who is allowed to be in places,” said co-creator Tom Carruthers, “who is allowed to feel like they belong.” They also revealed an unexpected challenge: “There is so much construction going on in Seattle right now,” said Newsom, “it was really hard to find debris netting anywhere.” –B.D.

With klezmer-style music, Yiddish songs and folk dancing, and a nimble cast of seven actors playing many characters, the Seattle Repertory Theatre’s production of Paula Vogel’s Tony Award-nominated Indecent honors a prescient century-old drama with the vivid storytelling techniques of modern theater. The extended one-act spins out in concentric circles from “God of Vengeance,” a daring play by Yiddish writer Sholem Asch about a Jewish brothel-keeper and his innocent daughter, who falls in love with one of the female prostitutes working for her father. We follow Asch’s work from its rocky birth and popular reception in Europe, to its scandalous 1923 Broadway premiere — which was shut down by New York police on the grounds of “indecency.” We also get to know Asch, his dedicated wife and the immigrant actors who risk their reputations to appear in the show.  And we look ahead, poignantly, to a performance of “God of Vengeance” in a Polish ghetto during the Holocaust. Performed with gusto, rich in humor and emotion, Indecent is unusual and fulfilling fare for the Rep’s Bagley Wright main stage. –M.B. 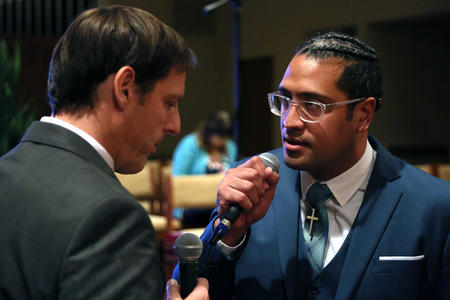 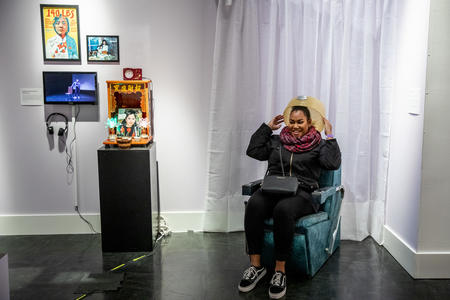 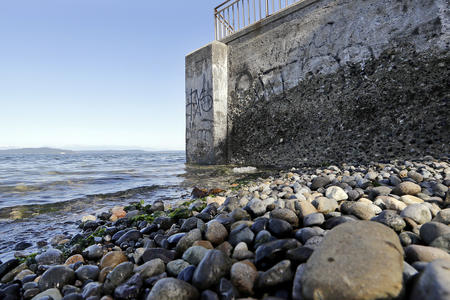