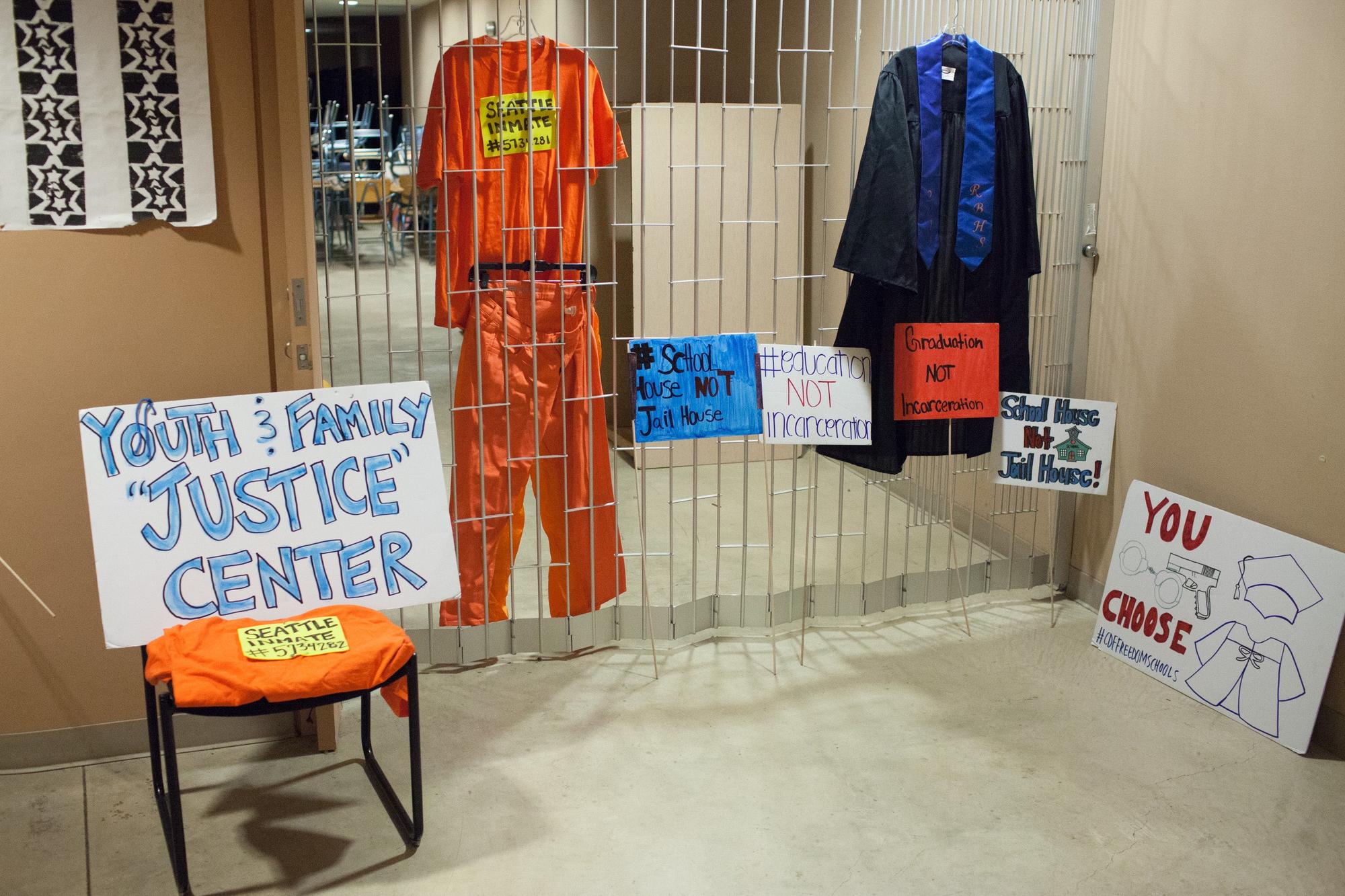 A 2015 display at Rainier Beach High School put together in protest of a new youth jail in King County. (© Matt M. McKnight)

When word spread that a teacher at a South Seattle elementary school had called the police on a Black fifth grader last May, families, district residents and even people living outside Washington state questioned the teacher’s decision to elevate what had been a classroom conflict to the criminal justice system.

The concern was understandable. Students — particularly students of color — fare poorly once the justice system gets involved and often find themselves in what advocates call the “school-to-prison pipeline.” But the incident at Van Asselt Elementary School, first reported on by The Seattle Times, was merely one of dozens in which Seattle Public Schools staff referred students to police in the past school year, according to data provided by the district.

School districts must report this police referral data, which are publicly available, directly to the U.S. Department of Education’s Office for Civil Rights for a biennial survey aimed at identifying barriers to educational opportunity. For its data collection, the Office for Civil Rights considers a matter to be a law enforcement referral any time a student is investigated, cited or arrested on suspicion of criminal activity on school premises. Students contacted by police because they are believed to be victims of a crime are not counted.

Seattle and most other school districts in Washington are reporting these referrals to the federal Office for Civil Rights.

But SPS officials aren’t certain that the data they’ve collected are accurate; very few school districts are. This, in part, is because Washington law has lacked directives about how school districts should collect and report police referral data.

Experts contend that poor data collection and reporting have prevented educational institutions across the nation from fully confronting their role in exposing youth to the criminal justice system.

“Part of the problem is that we're dealing with a widespread, likely [underreporting] of referrals to law enforcement, as well as school-based arrests,” said Daniel Losen, director of the Center for Civil Rights Remedies at the University of California, Los Angeles', Civil Rights Project.

In addition to issues regarding the accuracy of the data, Washington state is at odds with federal laws when it comes to reporting school-based arrests and police referrals.

State education departments are required to publicly report police referral data in annual state and local report cards, which capture data for performance indicators such as diversity, graduation rates and school discipline, as a transparency measure. The public-facing Washington state report card, however, includes data only for school suspensions and expulsions — not discipline involving law enforcement.

Losen said he has confronted various state and local education agencies about noncompliance involving the reporting of police referral data.

“I've often said, ‘You know, you may not be thinking about just not reporting data as a civil rights violation. But you're not complying with civil rights law.’ ”

While the federal Every Student Succeeds Act — the guiding law in U.S. education policy, known as ESSA — requires states to include police referral data in their report cards, the guidance is weak, said Paige Kowalski, executive director of the Data Quality Campaign, a Washington, D.C.-based education nonprofit.

Additionally, ambiguity surrounding how to report law enforcement referrals has muddled the data, further calling their reliability into question. Schools are instructed to report the number of students arrested or referred to police, rather than the total number of incidents. But that directive isn’t necessarily clear to the schools reporting the data, UCLA’s Losen said.

Consequently, the data don’t show how often students come into contact with law enforcement; if one student is referred to the police multiple times in a school year, the data reflect only a single instance. And although schools must break down the data by race, disability status, sex and English proficiency, they're not broken down by offense, so one wouldn’t know which behaviors are prompting contact with police.

It's not uncommon to find inconsistencies between police referral and arrest data that school districts maintain in their own records, data reported on the federal level and data gathered by law enforcement agencies due to this lack of clear guidance.

ESSA also doesn’t require states to collect arrest and referral data directly from school districts. They could use data that districts are already reporting directly to the U.S. Department of Education’s Office for Civil Rights. However, Washington has opted not to publish that data in its report card.

The reason, said Katie Weaver-Randall, director of student information for Washington’s Office of Superintendent of Public Instruction, is that the data available from the Department of Education are out of date by the time they’re made publicly available.

OSPI does include a link to a state data portal on its public-facing report card website, which then links to the federal Civil Rights Data Collection dashboard. Through this mechanism, one could find district or school-level police referral data. However, the link OSPI provides does not explicitly state that it can be used to locate that information.

“While folks can go to the [Office for Civil Rights] to get information about police referrals in their community, it is unlikely that local folks would even know that that data collection exists,” she said, adding that community members may not “necessarily have a lot of faith or trust that this federal data source 3,000 miles away from their home is an accurate depiction of what's going on in their community.”

According to OSPI spokesperson Katy Payne, the agency had not previously considered requiring school districts to report police referral data directly to its office, though it does collect its own data on school suspensions and expulsions from school districts.

Beyond the issues of noncompliance with ESSA, OSPI’s apparent inattention to school-based police referrals would seem to be at odds with the office’s recent efforts to reduce and monitor exclusionary discipline, or discipline that causes students to miss instructional time. Seeking this information out is something educators on all levels should be concerned with, regardless of legal mandates, Losen said.

“We want to be able to know how schools are responding to behaviors of students, and get a sense of what is going on here,” he said. “And if there are really high numbers of police involvement, you know that, as a member of the public … I want to encourage them to get the resources they need to make everybody feel safer – teachers, administrators and the students.”

In recent years, OSPI has professed a commitment to reducing disciplinary action against public school students, with an emphasis on curbing racial disproportionality in school discipline. These efforts have largely aligned with federal guidelines issued in 2014 meant to reduce the use of exclusionary school discipline.

But the Federal Commission on School Safety released a report in December effectively withdrawing Obama-era school discipline guidance. The commission asserted those guidelines weakened school safety systems, and that the emphasis on combating racial disproportionality prompted educators to avoid taking necessary disciplinary action out of fear of federal scrutiny. The commission also called on schools to explore partnerships with law enforcement agencies.

Critics warn, however, that expanding police presence in schools could increase the risk of harm for Black and Latino students especially, who are often disciplined more harshly than their peers.

“When you think about bringing police in schools, and I've said this and testifying, we all have to feel safer,” Losen said, adding that there are circumstances in which involving police in school discipline may be appropriate. “But that includes being safe from bigotry and racism.”

He added that while there are certain disciplinary circumstances in which it may be appropriate to ask law enforcement to step in, schools should have alternative behavior supports in place.

No such policy exists for Seattle Public Schools, or for the Federal Way and Highline school districts — each of which reported more than 100 police referrals during the 2015-16 school year, the year for which the most recent federal data are available.

A new state law, though, requires school districts with programs that place police on campus to prohibit “a school resource officer from becoming involved in formal school discipline situations that are the responsibility of school administrators.”

Districts with school resource officer programs must also begin collecting police referral data and implementing policies by next year “that clarify the circumstances under which teachers and school administrators may ask an officer to intervene with a student.” These requirements, however, do not extend to districts without these programs.

State law also compels all school officials to “promptly notify” law enforcement when a student brings a firearm to school. But there is no state mandate that explicitly limits the involvement of law enforcement in school discipline, unlike the state laws that restrict the use of suspensions and expulsions.

Seattle Public Schools spokesperson Tim Robinson said via email statement that the district has protocols in place for making 911 calls broadly. However, there is no district-adopted policy specifically for when and how staff should refer students to law enforcement as a matter of discipline, beyond reference to the state law that requires schools to notify police when a firearm is brought onto school grounds.

Robinson added that the Seattle Education Association — the union the representing district teachers and paraeducators — plans to revisit the clause in the association’s collective bargaining agreement that allows members to call 911 in the school setting if they feel threatened. He added that the two parties plan to do so “with an eye toward ensuring that any guidance provided includes viewing each possible circumstance through a racial equity lens.”

However, Robinson said the district does not have any immediate plans to change its current protocols for contacting law enforcement agencies.