‘We’re staring at the end of a livable future’: Native activists call for a climate emergency in Washington

On the steps of the Capitol building, Indigenous activists are urging the governor to treat climate change as a statewide emergency. But what would that mean in action? 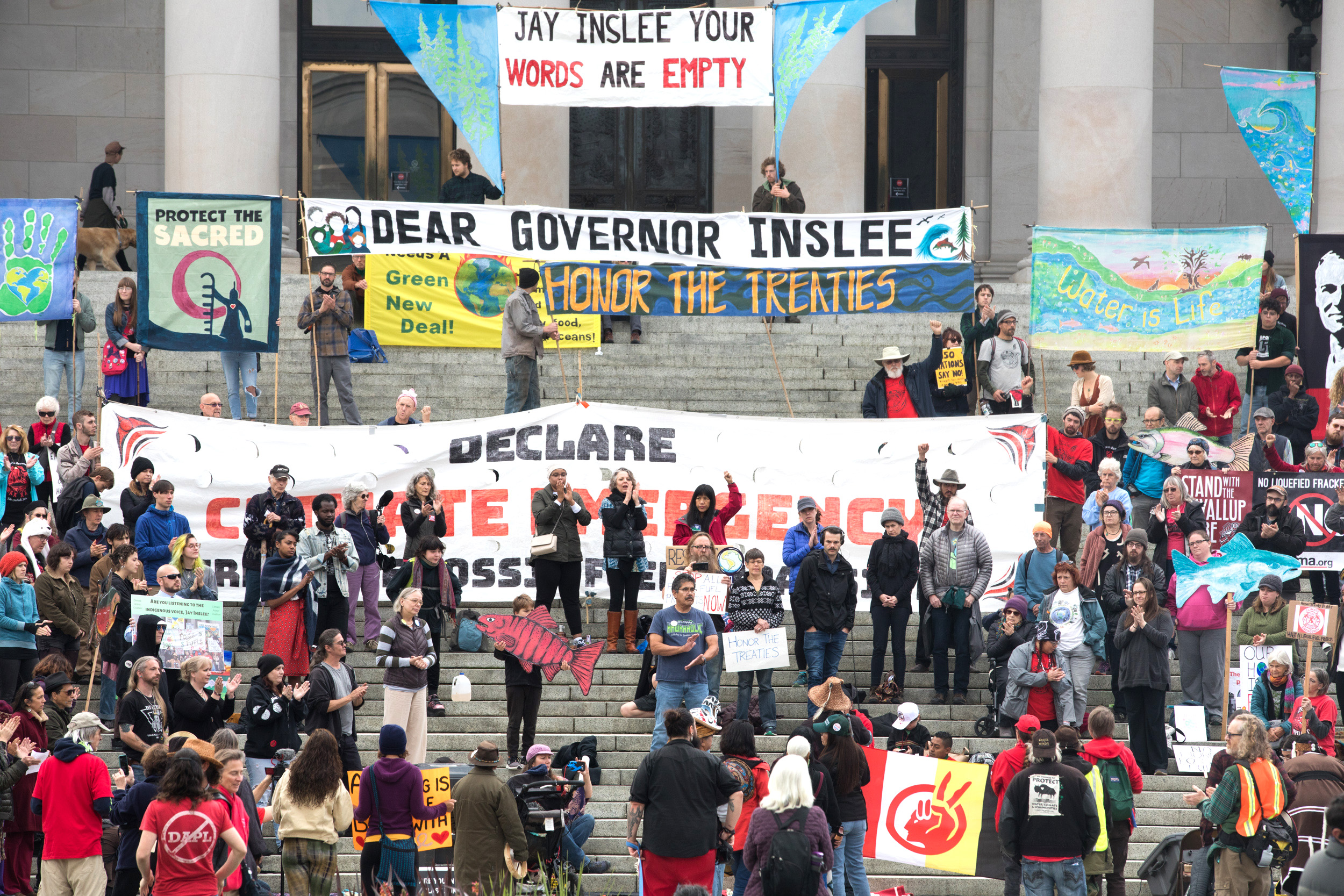 It’s been more than a week since Paul Chiyokten Wagner and a crew of other climate activists began camping out by Washington’s Capitol building in Olympia.

At first, their presence drew the attention of police. On the first night of their demonstration, Indigenous activists like Wagner set up “tarpees” (described by the activists as teepeelike Indigenous structures) on the building’s steps. By the next morning, police had removed most of them.

But Wagner and a couple dozen other activists didn’t leave. They set up a campsite a few miles from the building and have continued to rally daily outside of the Capitol with signs (one read, “Jay Inslee, Your Words Are Empty”). Wagner, who is Saanich First Nations, leads Indigenous songs of prayer multiple times each day. He says he won’t leave until Gov. Jay Inslee responds to their demand to declare a climate emergency.

“Right now, we’re staring at the end of a livable future,” Wagner says. “We are here to stand in front of that destruction in a prayerful and good way.”

The demonstration began Sept. 24, when Wagner, other activists with the group Protectors of the Salish Sea and their supporters ended their 40-mile march from the site of a liquefied natural gas facility in Tacoma to Olympia, demanding that Inslee make the declaration. Since then, activists from all over the Pacific Northwest have congregated at the Capitol building for daily demonstrations.

Their demands are dramatic but concise: They want Inslee to declare a climate emergency and put an end to all fossil fuel projects in the state. They also are requesting a special legislative counsel on climate change during the legislative session for 2020. Doing this would in turn honor tribal treaty rights, the group says.

Their efforts came to a head Saturday, when a few hundred activists returned to the Capitol building steps to demand that Inslee respond to their requests at noon. Inslee did not make an appearance; instead he released a statement explaining why he did not support the methodology of the protesters demands.

"I know that friends and allies are in Olympia today standing up for our future. However, some of the protesters have urged tactics that I don't agree with,” the release stated. “It has been suggested, by some, that the climate situation is so dire we need not follow the law or courts to make progress on climate goals.”

The statement concluded: "As long as I am governor, I will work within the legal parameters to push as hard and as quickly as I can for action on climate change.”

While requests for legislative hearings and the end of fossil fuel activity have been popular items on climate activists' goals in recent years, the concept of an emergency climate declaration at the municipal or state level is fairly new. Although these declarations have no strict definition, the idea has caught fire — over 1,000 governments globally have made this declaration. The city of Darebin in Australia was the first to do so, in 2016. In the United States, dozens of cities and counties have joined in and more are being added regularly. In Canada, Toronto made one last week. U.S. Rep. Alexandria Ocasio Cortez, D-New York, and Vermont Sen. Bernie Sanders drew up a resolution for a national declaration in July. But so far, no national or statewide climate emergencies have been declared officially in the U.S., and no local governments in Washington state have done so to date.

A New York-based environmental advocacy group called The Climate Mobilization has spearheaded the effort to bring such declarations to local governments in the U.S. Ezra Silk, the group's director of strategy and policy, says the idea behind these declarations is to make governments move out of a “business as usual, incremental change” mindset and treat climate change as an existential risk that requires an immediate, emergency response. According to the group's website, it launched the idea in the U.S. after the People’s Climate March in 2014 as a way to make governments see climate change as a true emergency and relay the need for “WWII-scale emergency action on climate.” 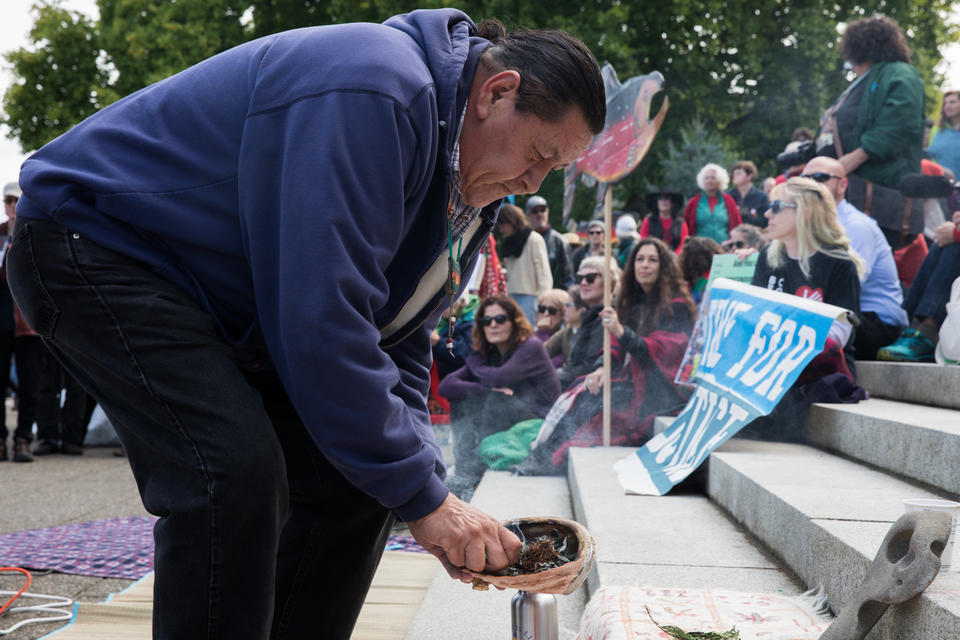 Raymond Kingfisher burns sage on the steps of the state Capitol in Olympia after speaking to the crowd, Oct. 5, 2019 (Matt M. McKnight/Crosscut) 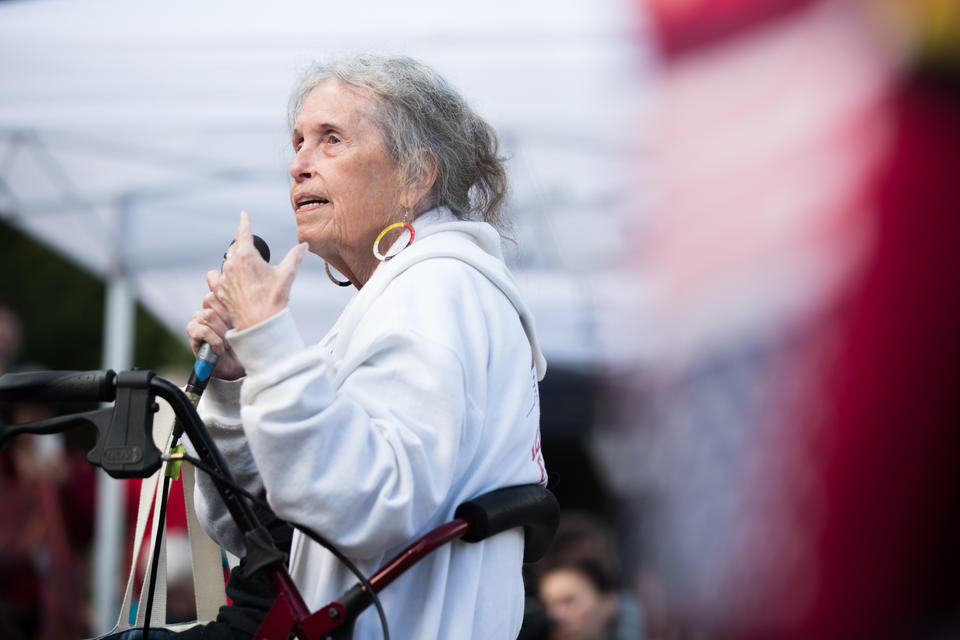 Ramona Bennett, former chairwoman and prominent leader of the Puyallup tribe, speaks to a crowd of activists at the Capitol building in Olympia, Oct. 5, 2019. "I don't give a damn about Inslee," she says of the governor's absence during the climate emergency event. "He doesn't give a damn about us either." 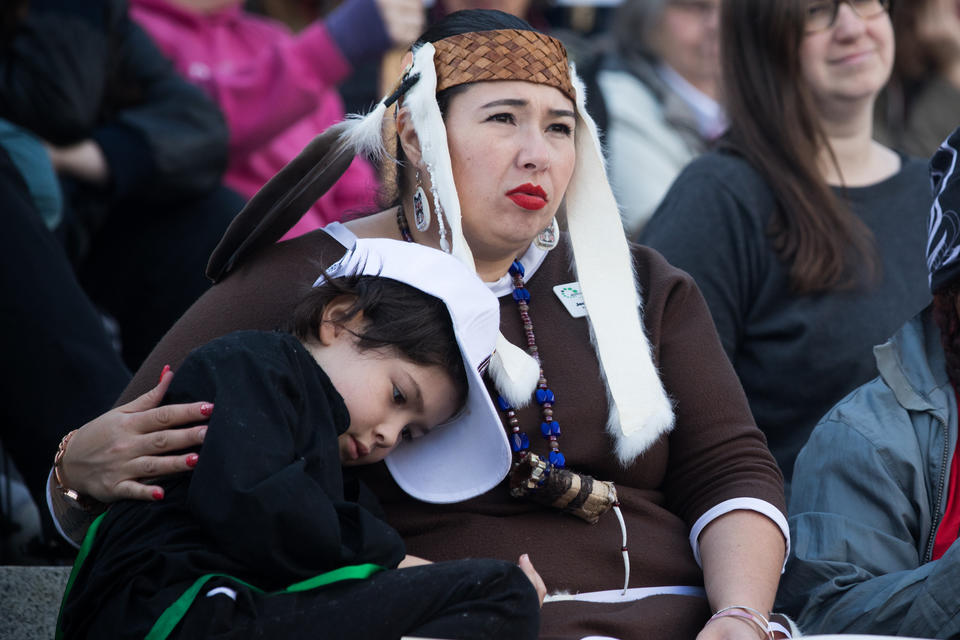 Jennifer Bereskin, a recent Emerge Washington graduate and member of the Snohomish and Aleut tribes, embraces her son Corban while sitting on the steps of the Capitol building during a climate emergency rally in Olympia, Oct. 5, 2019. (Matt M. McKnight/Crosscut) 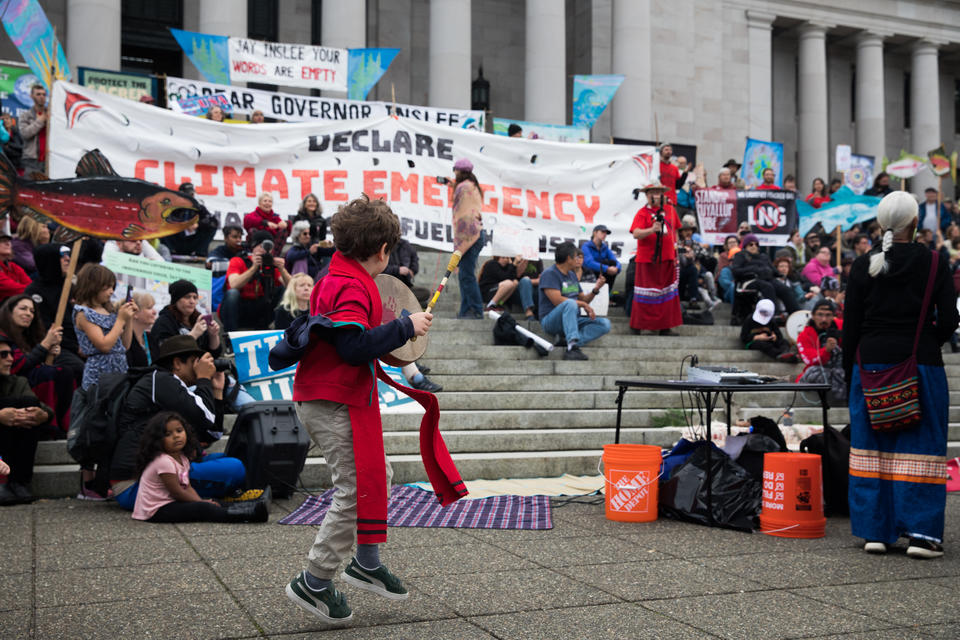 A boy dances and beats his drum during a climate emergency rally at the state Capitol campus in Olympia, Oct. 5, 2019. (Matt M. McKnight/Crosscut) 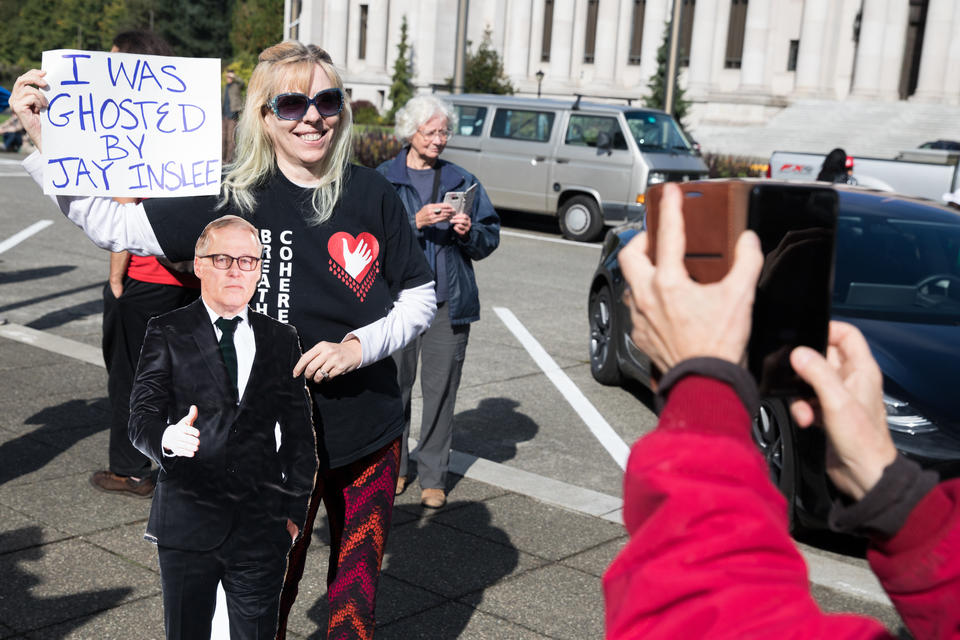 A woman poses for a photograph with a small cutout of Gov. Jay Inslee during a climate emergency protest in front of the state Capitol building, Oct. 5, 2019. (Matt M. McKnight/Crosscut) 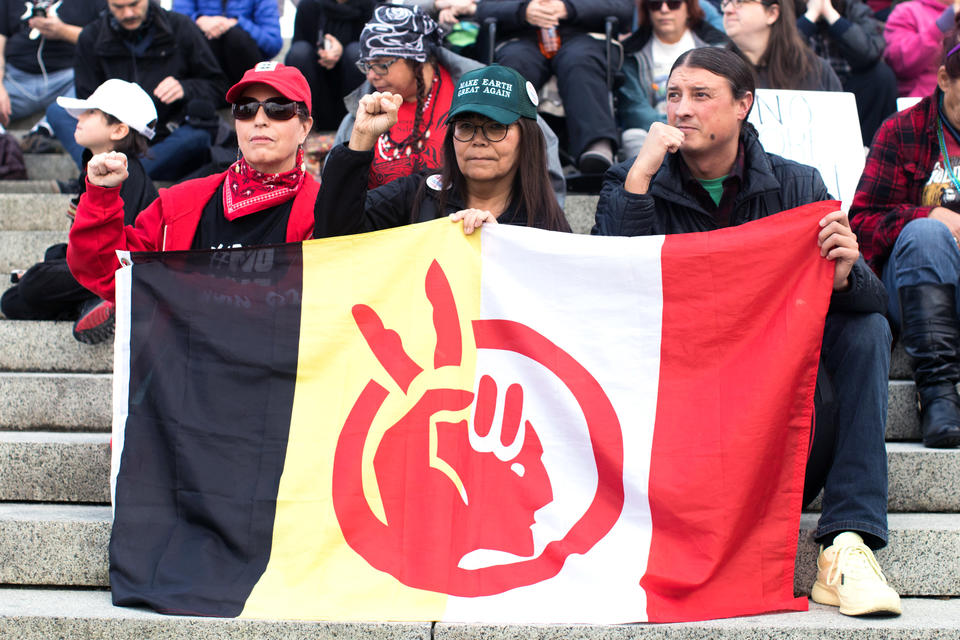 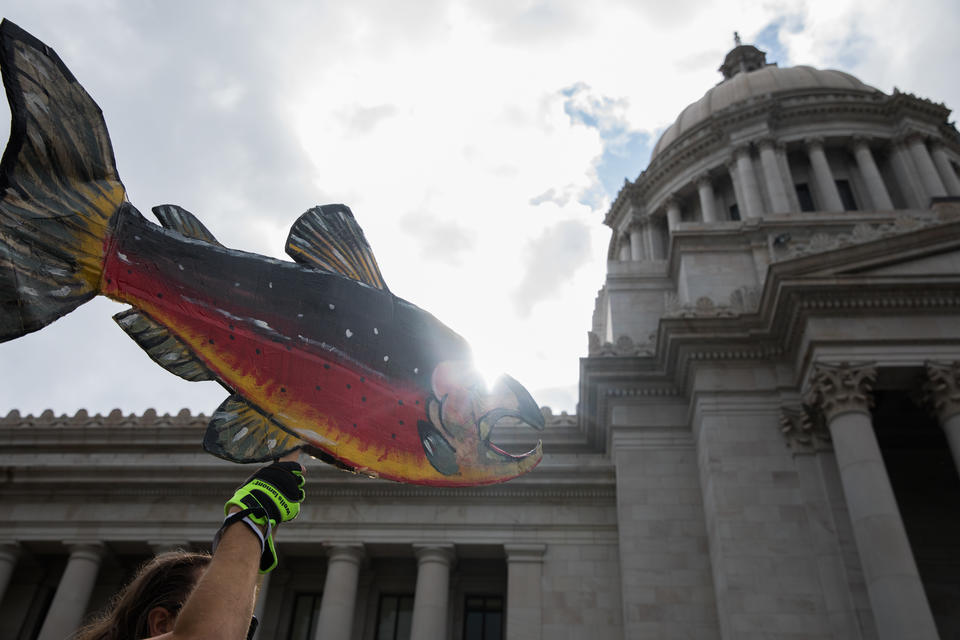 David 'Ohkn' Bluhm raises a fish sign to the sky in front of the state Capitol building in Olympia, Oct. 5, 2019. (Matt M. McKnight/Crosscut)

The website goes on to say that “entering emergency mode is the critical first step to launching the comprehensive mobilization required to rescue and rebuild civilization.”

However, because it’s a fairly new concept, Silk says governments have taken a variety of approaches, especially as different groups couple the declaration with different demands.

“There’s no standard template that anybody’s using,” he says. “A lot of people in the U.S. are using our template but, globally, it’s across the board — it’s like a meme that’s gone viral at this point, declaring climate emergency.”

Silk says that before a call from Crosscut he hadn’t known about the Indigenous activists in Washington asking for a statewide declaration. While Silk says he doesn’t know of any governments that have actually exercised emergency powers after making this declaration, he has seen cities follow up resolutions with actions already within their purview. A year after declaring a climate emergency, the city of Berkeley in California banned natural gas infrastructure in new buildings. Los Angeles formed a climate emergency mobilization office after its declaration. But Silk says people have only recently begun to see climate change as something that requires an emergency response, so there’s room for experimentation when it comes to the criteria that define these declarations and the actions that follow.

“The existing emergency laws aren’t geared towards this emergency,” Silk says. “They’re geared towards responding to natural disasters or wars. We don’t have the legislative base for an emergency response to climate change in place.”

In the meantime, activists at Washington’s Capitol plan to stay until Inslee declares a climate emergency. Araleyah, a Native activist from Portland who asked that her last name be withheld, said that for several nights she has slept in her car in parking lots near the Capitol so that she can join in the daily demonstrations. She says she has met others who slept on the steps the first night. Once asked to leave, they joined activists at the campsite or found other ways to spend the night in order to stay.

“If we’ve got to stay here past Saturday, I plan to come again,” she said. “I want to make sure that future generations have a place to live [and] the only way to do that is to fight for those rights and stand up for those rights. Nothing’s going to happen if we stay home and sit down.” 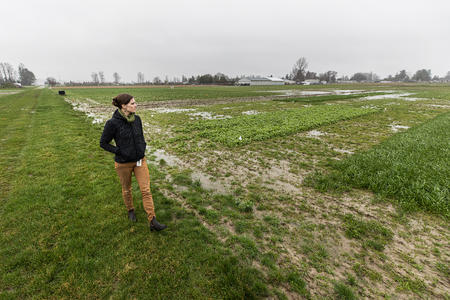 Bipartisan proposals before the state legislature would help scientists learn about storing carbon in soils and invest in GPS-guided tractors and climate-friendly cattle feed.

Bipartisan proposals before the state legislature would help scientists learn about storing carbon in soils and invest in GPS-guided tractors and climate-friendly cattle feed.

When a Washington woman fought tribal disenrollment, she became a target

How a burglary, social media and politics led to the bullying of a Nooksack Tribal councilwoman out of office.