Whose responsibility is the homelessness crisis?

It is a damning fact of our times that this question seems to have lost any satisfactory answer. 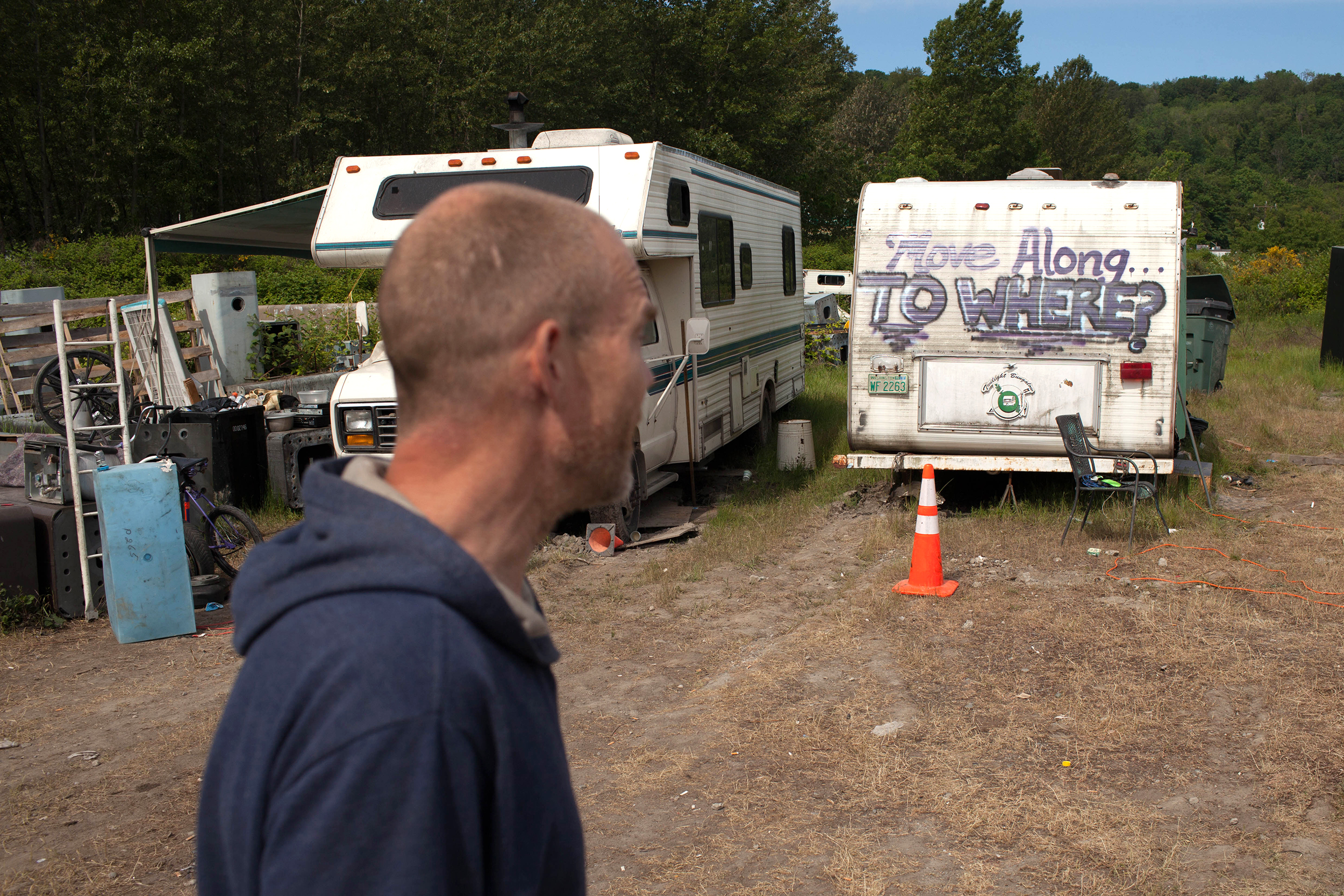 In this 2017 file photograph, a houseless man is seen at the encampment where he once lived near Seattle’s South Park neighborhood. The encampment was eventually swept, and a chain link fence was erected to keep people out of the area. (Matt M. McKnight/Crosscut)

One Sunday in July, I went door-knocking for Lisa Herbold. It was a sunny afternoon and almost no one was home. By the time I got to my final door in the North Admiral district of West Seattle, I’d left behind plenty of literature and handwritten notes, but tallied only a few brief interactions with actual humans. I knocked, waited and was about to walk away when a woman opened the door. She wanted to talk with me, really wanted to talk, and we talked for a long time.

She was a homeowner, white, recently retired, a self-identified liberal Democrat. When I brought up the homelessness crisis, I expected her response to place her somewhere on a familiar spectrum: Did she think the city was being too soft on homeless campers and that it should ramp up the sweeps? Or did she think the answer was more investment in housing, shelter and services? Or somewhere in between?

Instead, she asked me a surprising question: Why is it our responsibility to solve this problem?

It’s difficult to convey the character of this question. It wasn’t said with frustration, or callousness, or resentment. It was a genuine question, but tentative, tinged with an almost philosophical curiosity. I probed further. She was familiar with the deep roots of 21st century urban homelessness: the slashing of federal housing and safety net programs, skyrocketing housing costs and all the rest of it. She knew these systemic causes were big, far bigger than one city or county or even state. Solutions would have to be similarly big to be effective. So, she wondered, why is it our job — we, the people of Seattle and our city government — to try to fix this?

There’s a kind of absurdity in imagining a politician campaigning on this line of argument: “I’m sorry folks, we’re just way out of our league here. It’s rough times with the housing crisis, but you’re on your own with that. Drug addiction and mental health, also not our bailiwick. I’m sorry that society is breaking down and higher levels of government are failing to come through with meaningful support. People will continue to become homeless, and some of you will die from that, it’s true. If I’m elected, no big promises, no grand visions. I’m a back-to-basics kind of person. I’m going to focus on filling potholes. I’m asking for your vote.”

Probably not a winning stump speech. In fact, for nearly 10 years now, Seattle politics have been notable for quite the opposite attitude: a willingness to take responsibility, in the sense of initiative and action, for big social problems. We’ve passed path-breaking labor standards laws like paid sick leave, a $15 minimum wage and secure scheduling, as well as our state’s first income tax in nearly a century (the initiative is currently held up in legal limbo). Now we’re taking on the gig economy.

The coalitions and movements that have challenged the city to step up on these issues have, at the same time, made an assignment of responsibility, in the different sense of cause or even blame. They have pointed to a rigged economy that concentrates wealth and power in the hands of corporate elites, dismantling the “middle class” and abandoning the poor. If someone asked me to give the much-abused word “progressive” a real meaning for today, by tying it to an actual social phenomenon, I would attach it to these local movements. By challenging unbridled corporate power in Seattle and other cities, they have expanded the boundaries of what local governments are “supposed” to be responsible for — and won policies that force broader conversations, with state and nationwide repercussions.

And yet Seattle’s attempt last year to do something progressive, as defined above, about our homelessness crisis backfired spectacularly. During the now infamous fight to tax large businesses to fund affordable housing, shelter and services, a different attitude prevailed, one that rewrote the narrative of responsibility downward in a cascade of blame: It’s the fault of the city, it’s the fault of the homelessness service providers, maybe it’s the fault of the homeless people themselves. Naturally, the “blame the city council” message was pushed strategically and mercilessly by the business lobby and its media avatars, but this alone doesn’t explain the speed and intensity with which this narrative took hold.

In fact it was already here. It had been building for years, and local governments bear some responsibility for this narrative because of how they chose to deal with the deepening crisis. It’s not that they don’t know what works. “Housing First,” an approach originally pioneered in Seattle and now widely accepted as a best practice, is based on the notion that stable housing is the best foundation for tackling whatever other challenges a person may face. The problem is, the housing just isn’t there. With a countywide homeless population well over 10,000, and 75,000-plus more extremely low-income households severely cost-burdened by rent, the scale of the need for deeply affordable homes is mind-boggling.

Knowing what works is one thing; grappling with the scale of the need and resources required to match it is quite another. As housing costs have soared over the past decade, policy makers have been unwilling to do this. As a result, they haven’t been able to form a coherent plan to address homelessness. Instead they argue about how to allocate woefully insufficient funds and who is at fault when things keep getting worse. Although the funds being spent are in fact helping people, this is not readily apparent, and it’s easy to believe that money is simply being wasted. Uncritical media have been more than happy to reinforce this interpretation for the public. Worse, the city and county have themselves shifted blame onto shelter and service providers, imposing wildly unrealistic metrics for placements into permanent housing as though affordable units could be mandated into existence; and they’ve gambled on foredoomed strategies like “Rapid Re-Housing” that are incentivized by federal grants because they seem to offer a cheap market-based fix. In all these ways, local governments have been complicit in undermining their own credibility.

By late 2017, public frustration with the homelessness crisis had already reached a boiling point, setting the stage for the alliance that killed the head tax. In the end, maybe it is fitting that the forces arguably most immediately responsible for the housing crisis — mega-corporations that are driving rapid growth and homeowners who have thwarted zoning changes that would lead to increased density — would unite in the claim that the real culprit behind rising homelessness is not the lack of affordable housing, but local government mismanagement and waste.

But anyway, back to the woman at the door. She didn’t think this way. She was not an enraged NIMBY. And yet she was refracting that same generational experience through another lens. She had lived through the breakdown of the old system of obligations and rewards, the world where working hard and playing by the rules was supposed to earn you material comfort and security. Instead of outrage, her reaction was something closer to resignation. But it left a puzzling question: With the collapse of those conventions, what do any of us still owe to one another, really? I could feel a kind of moral chasm opening up beneath our feet. It wasn’t just our city government we were imaginatively releasing from responsibility. It was each and every one of us.

Maybe that’s the most damning fact about the way we live today: not the inequality, or the poverty, or the oppression per se, but that the question, “What are our responsibilities to one another?,” has lost any satisfactory answer. With whom can we fulfill the injunction to love thy neighbor as thyself? No circle is small enough to be safe; none is large enough to be adequate. Moral bonds become impossible to sustain, those who try are penalized, and merely transactional relations become the norm. We all become less human. In this story, the heroes have to be the people who work on the front lines of the homelessness crisis day after day, as social workers or volunteers or community organizers — people who have chosen to make homelessness, and their fellow humans struggling with homelessness, their personal responsibility. You don’t do that work for those wages just because you need a paycheck.

Meanwhile, of course, local governments remain on the hook. It’s an elementary truth of politics that when those with power — elected officials, ruling classes — can’t address social crises with some minimum of effectiveness, they lose legitimacy. The city continues to shuffle homeless campers and vehicle residents from place to place, disrupting their lives without providing appropriate alternatives. As Seattle and King County consider merging their homelessness response systems, it remains to be seen how serious this new regional authority will be about finding new resources to match the scale of the need. One way or another, we can expect the push and pull of competing narratives about responsibility for the homelessness crisis to continue. Eventually, we must hope, some new harmony will be achieved.