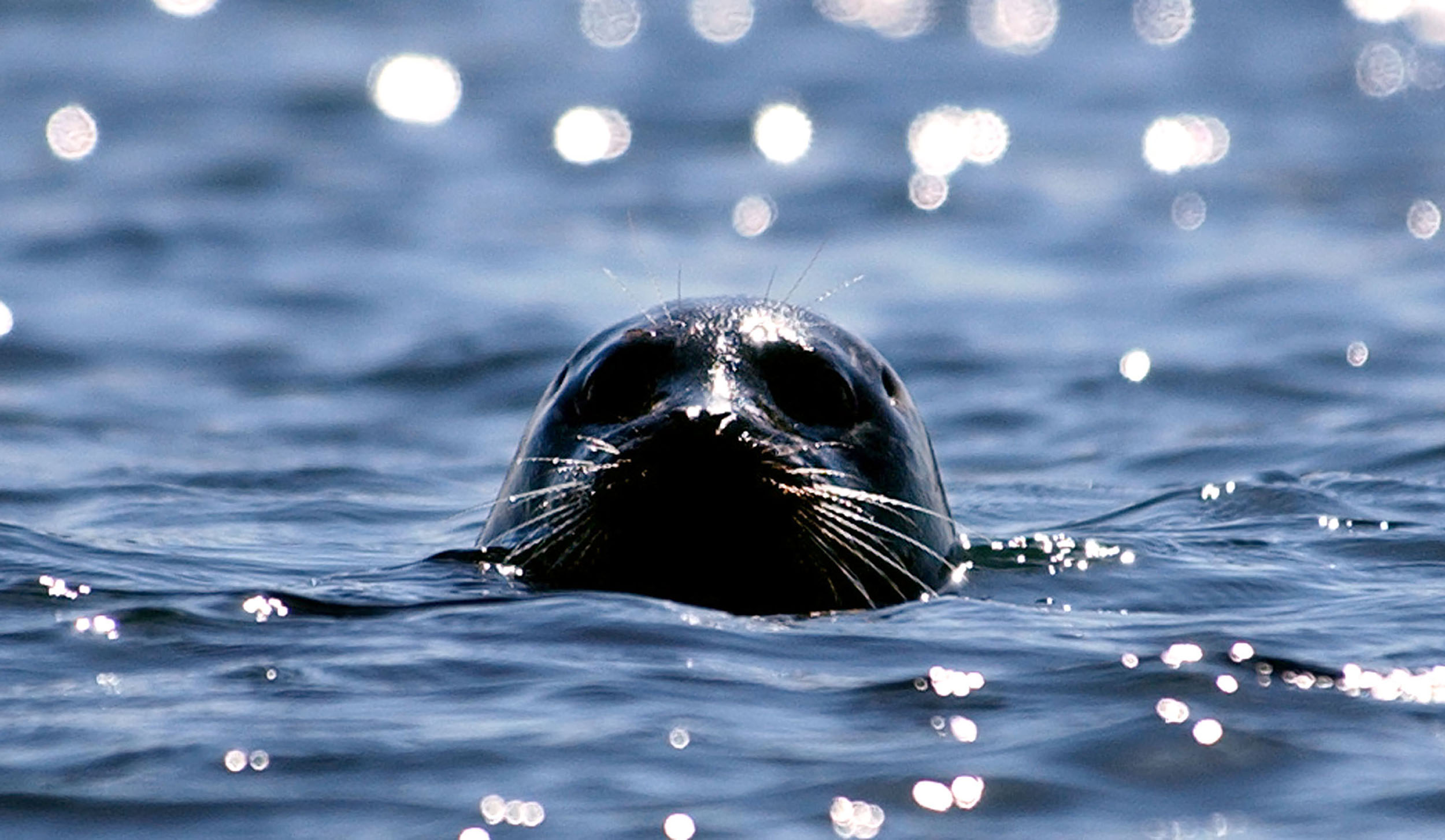 In this file photograph, a harbor seal peers at sea kayakers in the water off Henry Island, near Roche Harbor, San Juan County, in the Salish Sea region of the Puget Sound. (Elaine Thompson/AP)

One Friday afternoon in August, Stephanie Norman was performing a routine necropsy, hacking away at the remains of a large, pneumonia-stricken harbor seal, when she nicked herself with the scalpel. She thought nothing of it until she woke up Sunday morning. “My finger was this big around,” she said later, her thumb and index finger making a circle the size of a silver dollar.

Norman, a veterinary epidemiologist, examines stranded seals and porpoises in the Salish Sea for antibiotic-resistant bacteria. Despite her injury, she rushed to the airport to travel to a research conference. But on the flight, her symptoms worsened: “The biologist sitting next to me said, ‘Do you know that you’ve got a red streak going up your arm?’ ” So, after she landed, Norman sought help at an urgent care clinic. Knowing her infection could be resistant to antibiotics, she was nervous.

Each year, about 2 million people in the U.S. develop antibiotic-resistant infections, and 23,000 of them die as a result. Scientists need to understand how resistant bacteria travel to control their spread, but that path is far from straightforward. To illuminate the pathways among humans, pets and livestock to wild animals, researchers must collect samples from a variety of species, including those that live in the ocean.

But sampling marine animals, especially wild ones, is hard. Taking a swab from a creature’s body requires removing it from the water, which disturbs the animal and requires significant time and effort. As a result, there are only a handful of studies on resistant bacteria in wild marine animals and resistant bacteria, leaving scientists with an incomplete picture of how superbugs spread in coastal waterways.

To remedy that, Norman is enlisting help from volunteers who respond to stranded marine mammals around the Salish Sea. They take samples from fresh dead seals and porpoises, which are analyzed for resistance to 16 antibiotics. They bring some carcasses to Norman for necropsies, which provide clues about the animals and their potential exposure to resistant bacteria: what they ate, how they died and any contact they may have had with human-made materials, such as fishing lures.

Resistant bacteria might also be latent in the water, partly a result of the aquaculture industry’s use of antibiotics. The Food and Drug Administration has authorized three antibiotics to treat ailing fish, which are related to medications also used to treat humans. The treatments, dumped into the water directly or via fish food, easily disperse from open pens; a 2013 study estimated that 80% of aquaculture medications make their way into the greater environment. These trace amounts stimulate the growth of resistant bacteria by killing off all but the hardiest strains. Those bacteria can then afflict wildlife and sometimes even find their way back to land, infecting humans. In Washington, studies from as early as 1992 show resistant bacteria proliferating around commercial Atlantic salmon pens.

Other potential sources include sewage, agriculture and stormwater runoff. Tracking superbugs in the ocean as well as on land will provide a clearer picture of how they spread and perhaps suggest ways to minimize transmission. Norman’s test results will be entered into the archives at ARMADA, a nonprofit organization building a database of antibiotic-resistant gene data for researchers. Evgeni Sokurenko, a University of Washington microbiologist on the organization’s advisory board, said this information could help researchers stop bacterial outbreaks before they start. “If you imagine bacterial strains as criminals, what we’re doing is creating a database of these criminals so they can be caught, and [we can] figure out where they’re coming from,” he said.

So far, Norman and her team have collected samples from 28 seals and 10 porpoises. About half carried resistant bacteria, while a sizable portion — half the porpoises and a quarter of the seals — also harbored what Sokurenko calls “nightmare bugs”: bacteria that are resistant to more than one antibiotic, and thus less treatable by the medications doctors and veterinarians typically use. These strains were resistant to ciprofloxacin and third-generation cephalosporins, medications commonly used to treat a wide range of infections in humans. That’s “quite unusual for wildlife,” said Sokurenko.

Norman’s goal is to sample 130 marine mammals by the end of the year. One project can’t unravel all the intricacies of how antibiotic-resistant bacteria spread, but Norman hopes her samples yield some answers. After all, ocean health and human health are inextricably linked, she said. “It’s a two-way street.”

Her finger infection in August drove this home. At first, Norman didn’t know which bacteria was the culprit — just that it came from an ill seal that may have harbored resistant bacteria.

“Wow, that’s concerning,” the clinic nurse told her. Together, they decided on two antibiotics, hoping at least one might work: a shot of cephalosporin and a course of doxycycline. A week later, the seal’s lab results came back: It was a type of resistant E. coli, which, luckily, was not resistant to doxycycline — and Norman’s finger was healing nicely.

This story was originally published at High Country News on Oct. 9, 2019.