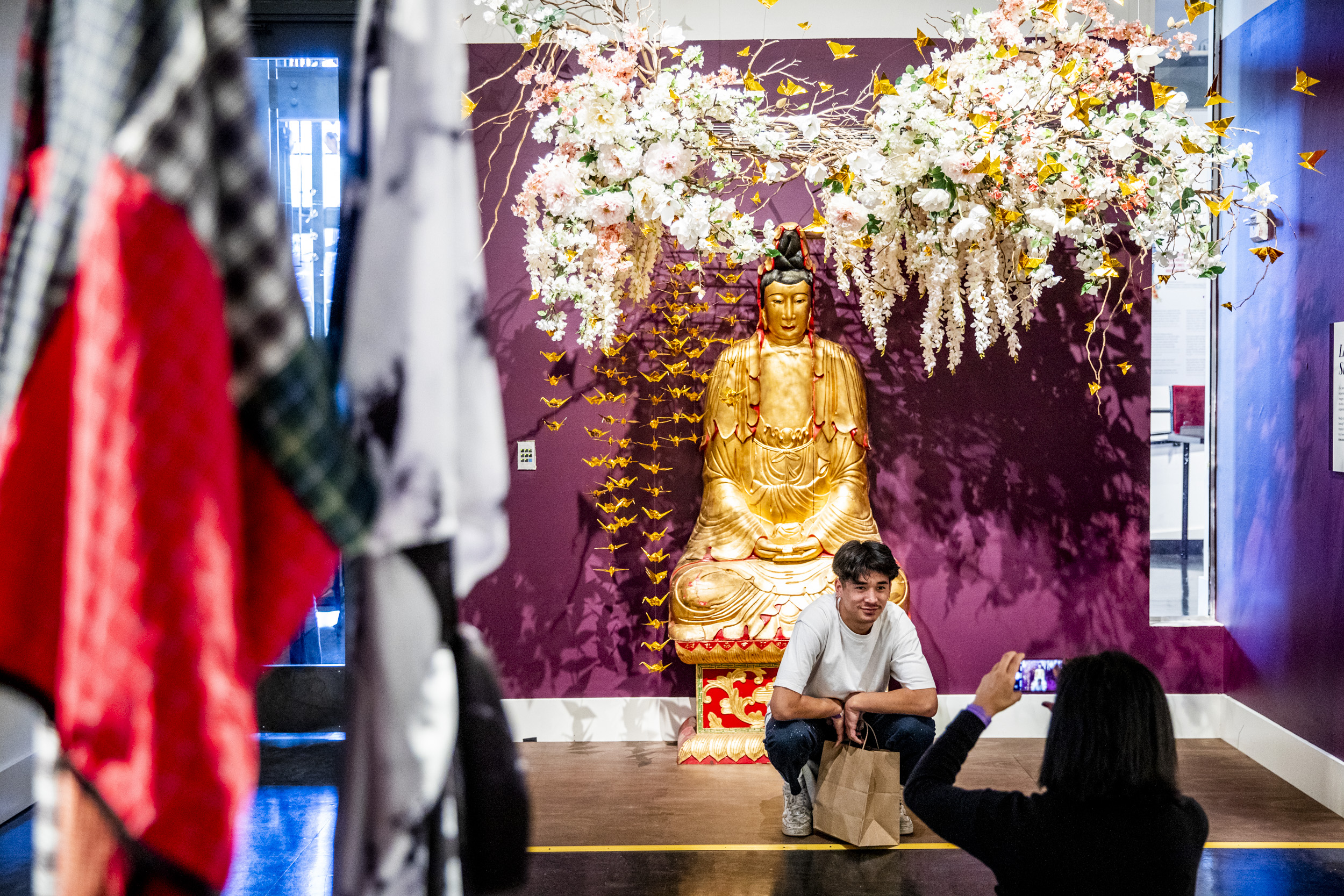 Keats Hoonan of Bainbridge Island poses for a photo in the 'Where Beauty Lies' exhibit. This installation features silk flowers, cranes and a Buddha statue from the Wing Luke’s collection (originally from the restaurant of King County Councilwoman Ruby Chow). Michael Sing and Bobbie Yanoupeth, founders of the International District-based wedding and beauty company BAHTO designed the “selfie station” to capture the duality of their identities. “It’s reflective of who we are as two gay Asian American males,” Sing and Yanoupeth say in a statement on a plaque. (Dorothy Edwards/Crosscut)

Two women, deep in thought, stand in a hallway lined with mirrors of different shapes and sizes, staring at their reflections. On decals between the mirrors, the stanzas of a poem guide their experience.

Reach up and tickle your fingertips

Do they rest on shadows, pillows, or concealer?

Be gentle here — your skin is thin and delicate.

The women are sisters, Sarah Nguyen, 33, and Anne Nguyen, 35. Before arriving at the preview on this evening, they didn’t know anything about the Wing Luke's new exhibit, Where Beauty Lies. Coincidentally, their Vietnamese mother was an aspiring model, which they say instilled vanity as a value very early in their life.

The exhibit looks at beauty standards and stereotypes in the Asian Pacific American community across age, gender and sex. But Where Beauty Lies is also a celebration of how the community has taken back that beauty and redefined it. This duality is emphasized by the double meaning of the exhibit’s title.

The collected works examine how the perception of Asian American beauty is influenced by colorism, a legacy of colonialism, its media caricatures, pop culture exoticism and generational traditions. In doing so, the Wing joins the current national conversation about Asian American representation, from the film Crazy Rich Asians to Saturday Night Live welcoming its first Asian American cast member. Locally, the conversation has surfaced this year with The Paper Tigers, a movie shot in Seattle that takes a nuanced approach to the kung fu genre, as well as Theater Off Jackson’s production of 140 LBS: How Beauty Killed My Mother, Susan Lieu’s one-woman show about dealing with her mother’s death, which resulted from a botched plastic surgery.

“We grew up in this, and in my case I never really stopped to realize that other people went through this, too,” Sarah Nguyen says of the feelings that arose while exploring the six-room exhibit. 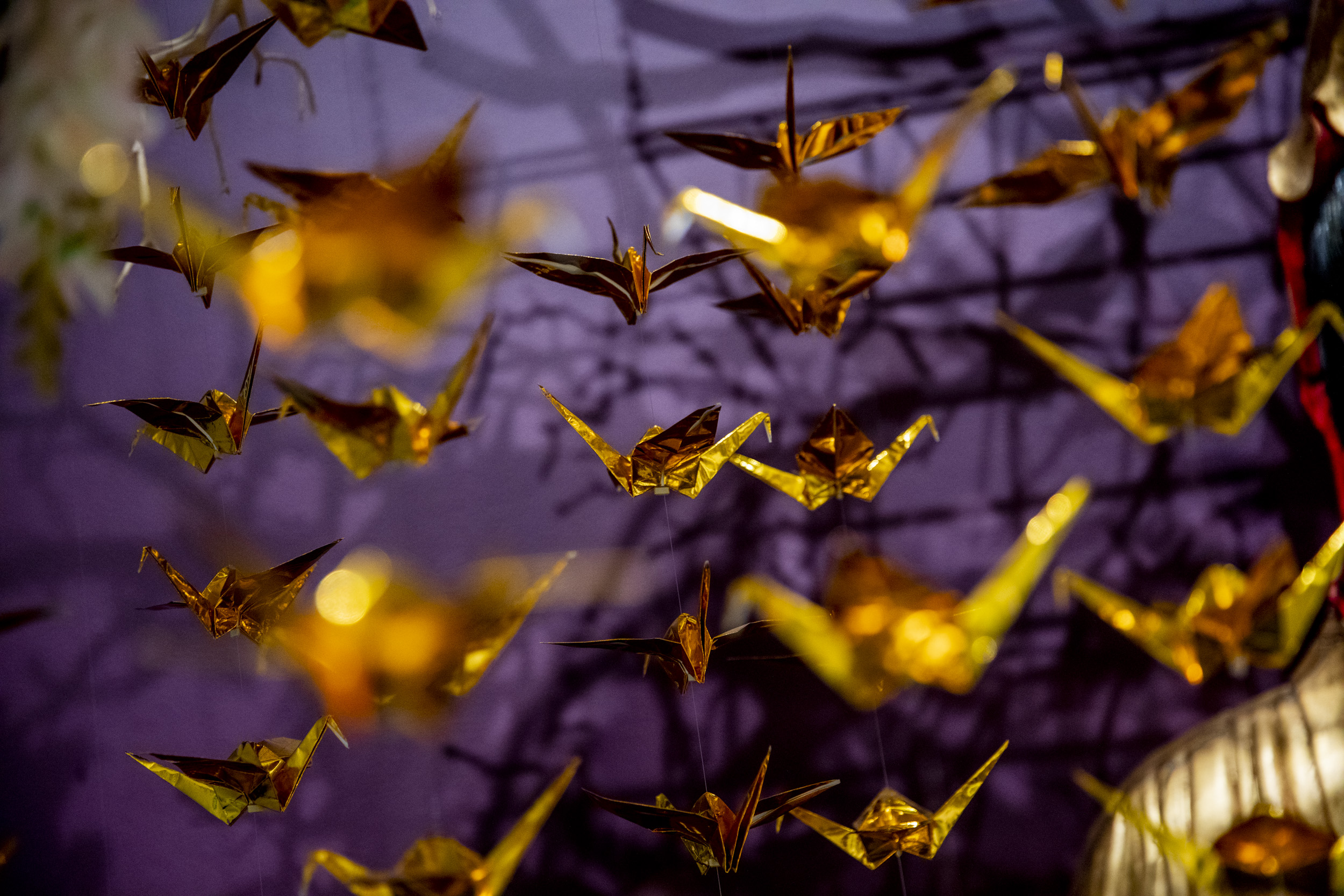 “Bahtoh,” folded paper cranes by Michael Sing and Bobbie Yanoupeth in the “Where Beauty Lies” exhibit at the Wing Luke Museum of the Asian Pacific American Experience in Seattle on Oct. 11, 2019. (Dorothy Edwards/Crosscut)

“Bahtoh,” folded paper cranes by Michael Sing and Bobbie Yanoupeth in the “Where Beauty Lies” exhibit at the Wing Luke Museum of the Asian Pacific American Experience in Seattle on Oct. 11, 2019. (Dorothy Edwards/Crosscut)

“What really struck me right now is the eyelashes [stanza] because it’s such a minor detail; it’s really not important,” she says, “but to consider why aren’t my eyelashes as curled or as thick and then discussing how beauty really is in the eye of the beholder.”

Her sister, Anne, adds that growing up in a primarily white area meant her beauty standards were skewed.

Kevin Ninh, a featured speaker, expresses a similar experience, one where his standard of beauty was defined by the dominant culture.

Ninh is better known to his more than 800,000 combined followers on Instagram and YouTube as Flawless Kevin. As a social media influencer who identifies as nonbinary, Ninh creates humorous makeup tutorial videos and fashion posts with a message of body positivity and acceptance.

The show features five photographic portraits, by Auriza Ugalino, of local Asian Americans displaying fashion that reflects their heritage, including a shot of Ninh wearing a traditional Vietnamese wedding crown called a Khan Dong. Tonight he’s wearing a silky white blouse with a bow, a leather A-line skirt, an oversized gray blazer and black pointy boots. He struts to the front, grabs the mic and cracks a joke about bringing a date to the exhibit.

Ninh comes off as the same bubbly personality he presents in his videos. But like Anne and Sarah Nguyen, he doesn’t shy away from talking about confronting the serious hurdles in his life, including coming to terms with his cultural, gender and sexual identities. He recalls bluntly telling his mom, “I like boys,” and the tension that set in immediately after. But she eventually accepted his sexuality and even began telling Ninh when his outfits looked good, as he experimented with clothes and makeup. 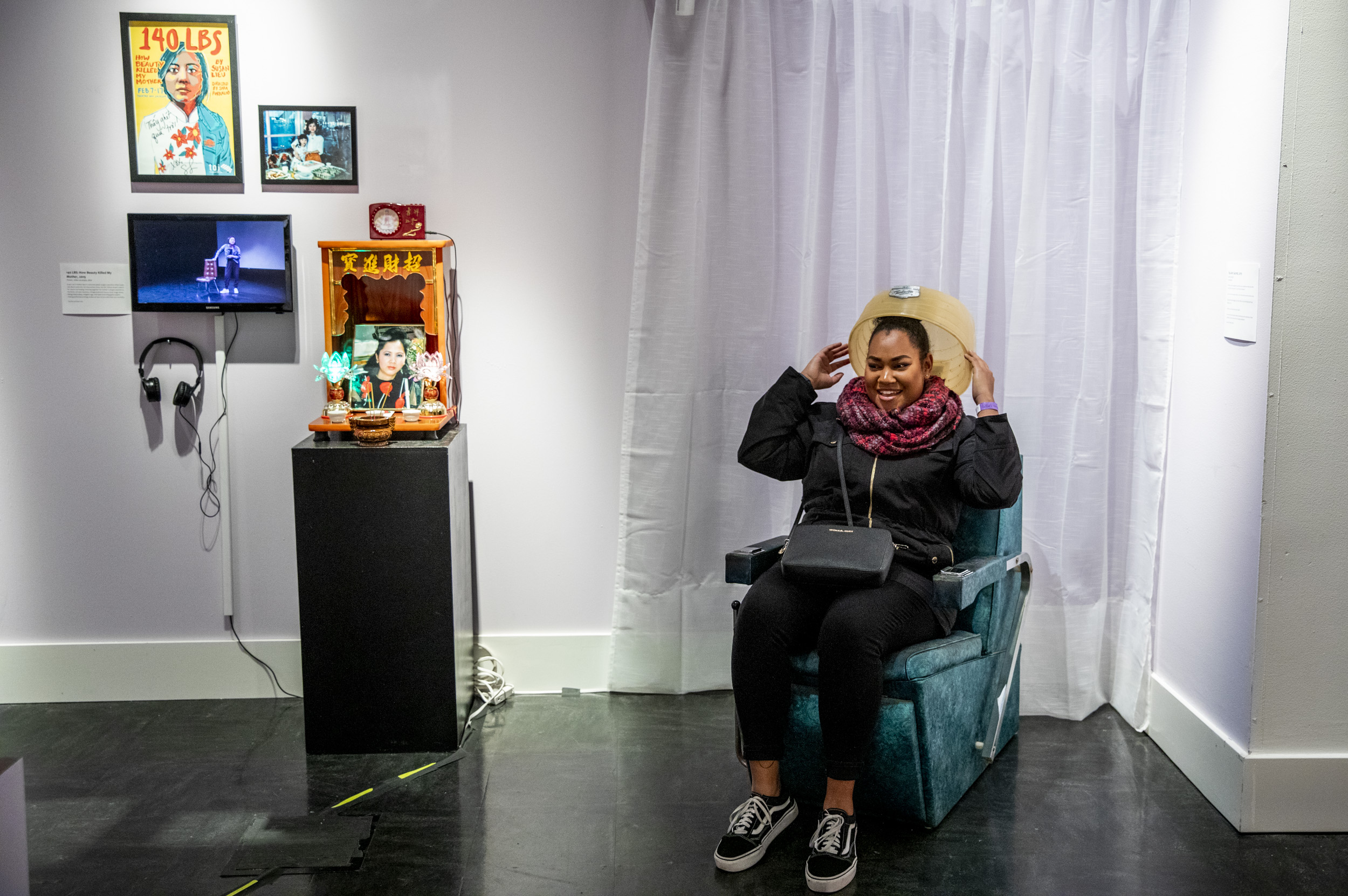 Mariama Suwaneh of Seattle experiences the “You Are Sacred” soundbath by sound artist Kamna Shastri in the “Where Beauty Lies” exhibit at the Wing Luke Museum on Oct. 11, 2019. At left, an installation and shrine by Susan Lieu, whose mother died due to a botched plastic surgery.  (Dorothy Edwards/Crosscut)

Mariama Suwaneh of Seattle experiences the “You Are Sacred” soundbath by sound artist Kamna Shastri in the “Where Beauty Lies” exhibit at the Wing Luke Museum on Oct. 11, 2019. At left, an installation and shrine by Susan Lieu, whose mother died due to a botched plastic surgery.  (Dorothy Edwards/Crosscut)

“It wasn’t until I gained an [online] audience she truly understood my impact on people’s lives and that my identity wasn’t going to be something that hindered me, but fueled me,” he says, standing next to the podium instead of behind it, making his outfit fully visible. “Unfortunately my mother did pass away … but I’m so glad she got to accept me fully, and we got to experience these feminine things together.”

Visitors are encouraged to be reflective, and not just by looking in mirrors. People can write down an insecurity on a triangular strip of paper and throw it into a faux fire pit that has a dim orange light at the center. The papers don’t burn, but together resemble flames.

Lieu, the creator of 140 LBS: How Beauty Killed My Mother, mentions she is four months pregnant. She sits across from the pit in a hair drying beauty salon chair titled "You Are Sacred." The interactive “sound bath”, created by local writer and radio reporter Kamna Shastri, plays anonymous recorded responses of people answering questions about how family and friends describe them and how that made them feel.

A member of the exhibit’s Community Action Committee, which worked for a year to develop the theme and artifacts, Lieu says she was feeling fantastic about how it turned out.

Dozens of local and national contributors shared their stories with Where Beauty Lies, including  KING5’s Lori Matsukawa, who was inspired to become a journalist after becoming the first person of color to win Miss Teenage America, in 1974.

At the preview, Matsukawa admits it’s a little embarrassing, but says she was happy to have represented beauty in a way that showed how diverse it could be. After winning and traveling the country as the pageant winner, she learned she enjoyed seeing and hearing people’s stories.

Other contributors include the Filipino drag performer Aleksa Manila and Audrey Siu, the local founder of Veque, a nail care company. Siu, who grew up in nail salons, took inspiration from her first nail color collection from her family’s refugee experiences. An almost black color is called “Memorie.” On a nearby plaque, Siu explains, “I feel like I have a memory of those dark times, even though I don’t.” 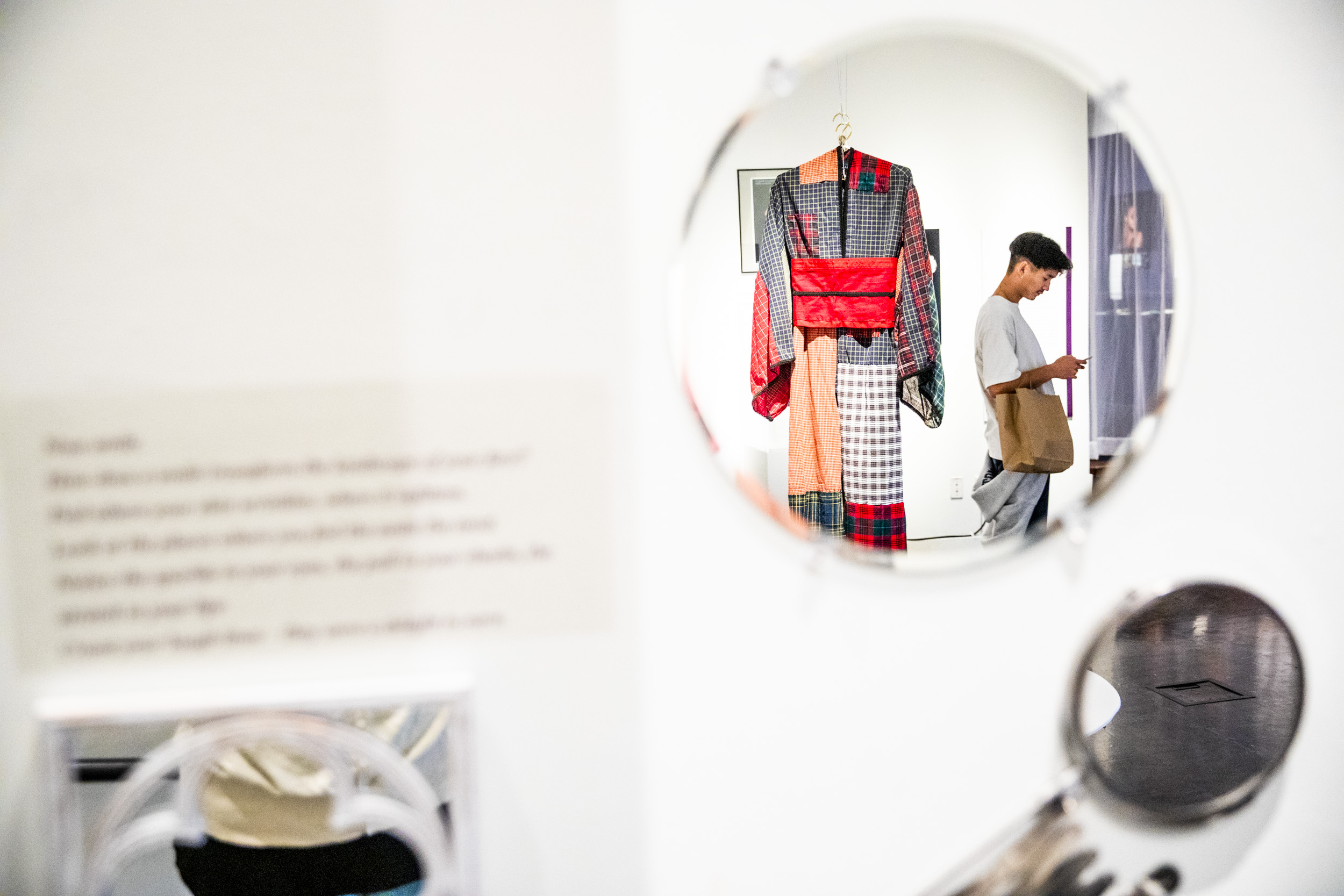 Reflected in a hall of mirrors interspersed with poetry is Washington state artist Maya Caulfield's one-of-a-kind Japanese-Scottish kimono, which she made from traditional plaids to reflect her dual heritage. (Dorothy Edwards/Crosscut)

Reflected in a hall of mirrors interspersed with poetry is Washington state artist Maya Caulfield's one-of-a-kind Japanese-Scottish kimono, which she made from traditional plaids to reflect her dual heritage. (Dorothy Edwards/Crosscut)

Visitors are invited to use their own stories to name a color on the wall. Among several vertical stripes of color, someone has posted a clear sticky note on a strip of purple, naming it “Ube cake.” To the left of the interactive are pedicure chairs and information about Nailed It, a PBS documentary that tells the story of 20 Vietnamese refugee women who used their mani-pedi skills to empower themselves and kickstart the now booming beauty nail salon industry.

In another room, looming above attendees’ heads are movie posters from six films across different eras. With Crazy Rich Asians (2018), Disney’s Mulan (1998), Charlie’s Angels (2000, starring Lucy Liu) and The Matrix (1999), and the 1918 silent film The Honor of His House, the display emphasizes how media has depicted and influenced Asian identities.

By way of example, Mikala Woodward, the exhibit’s lead developer, points to Japanese actor Sessue Hayakawa in The Honor of His House. She notes that throughout Hayakawa’s Hollywood career he was typecast as a villain and exoticized as a lover. Woodward says because of the era’s anti-Asian sentiment (sometimes referred to as “yellow peril”) Hayakawa’s sex appeal with white women was “threatening,” eventually causing him to lose roles.

“Beauty often has a glamorous side, but it also has a dark side that is racist, colonialist, capitalist and exploitative,” says Woodward.

Learn more about the repercussions and reinterpretations of beauty standards within the Asian American community at the Wing Luke Museum of the Asian Pacific American Experience. Where Beauty Lies will be open through Sept. 19, 2021 ($10-$17)

Conversations about beauty can be intense and personal, but Woodward says the committee made those discussions fulfilling.

“It was fun working with this group because we all ended up crying,” she says.

One of her fellow committee members was Sally Chung, the poet behind the wall poem that left the Nguyen sisters struck and staring at each other’s reflections, contemplating their likeness and complicated relationship with beauty. She hopes the poem will read like a guided meditation.

“I wanted the person to get to the end of the poem and feel a deeper sense of appreciation and gratitude for what they’re looking for in the mirror,” she says. “All these generations and years and genetics and [migration] have led to this, and this is good.” 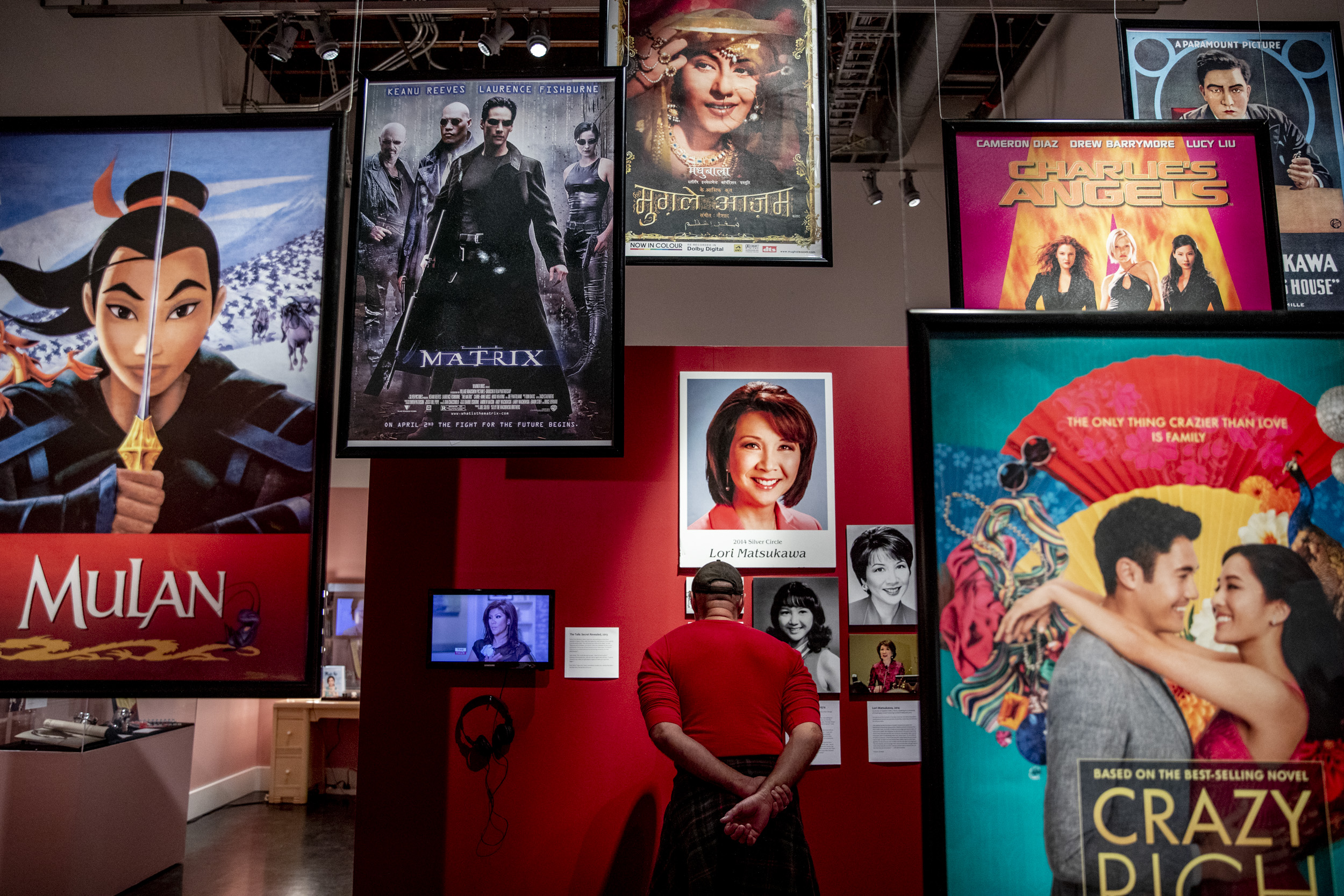 Movie posters on display at the “Where Beauty Lies” exhibit at the Wing Luke Museum on Oct. 11, 2019. At center, a display about local journalist Lori Matsukawa's career in teen beauty pageants. (Dorothy Edwards/Crosscut)

Movie posters on display at the “Where Beauty Lies” exhibit at the Wing Luke Museum on Oct. 11, 2019. At center, a display about local journalist Lori Matsukawa's career in teen beauty pageants. (Dorothy Edwards/Crosscut)