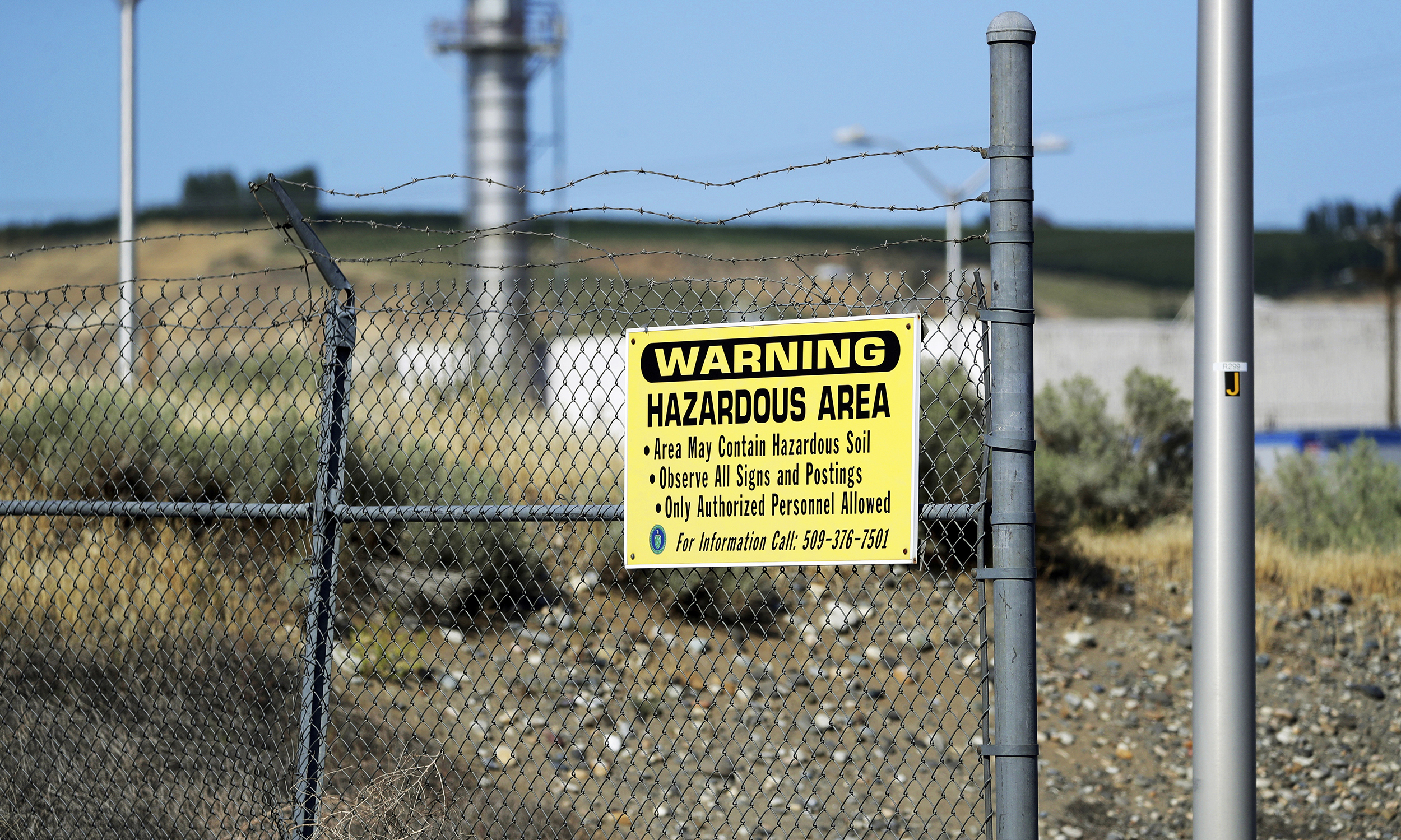 A sign at the Hanford Nuclear Reservation warns of possible hazards in the soil along the Columbia River near Richland in Benton County, Aug. 14, 2019. (Elaine Thompson/AP)

Already 12 years behind schedule, a project at the Hanford nuclear complex meant to transform millions of gallons of radioactive waste into benign glass faces yet another delay.

Since the 1990s, Washington state has been prodding the U.S. Department of Energy to build two “glassification” plants at Hanford that would permanently contain the waste stored in aging tanks on the site. Delays have added to the cost of the project, now estimated at $17 billion.

The Energy Department wants to push that target back even further, and last month began negotiations with state leaders to do so. Those negotiations are also expected to address whether additional tanks must be built to hold the waste, a move the state supports, but which the DOE has been reluctant to adopt

“We want to try to come up with a schedule that doesn’t have to be revised every few years,” said Suzanne Dahl, section manager for tank waste management with the state Department of Ecology. Dahl noted that the longer the project takes, the more it will cost the federal government.

Located dead center in the 584-square-mile Hanford Nuclear Reservation is the most radiologically and chemically polluted spot in the Western Hemisphere. The site’s 177 underground tanks hold 56 million gallons of radioactive fluids, sludges and chunks, mixtures of roughly 100 different substances.

Hanford’s 149 single-shell tanks are all beyond their design lives, and at least 67 have leaked. More than 1 million gallons of waste have seeped into the ground in a plume extending toward the Columbia River, seven miles away. Some of the leaked waste has reached the river.

Since the mid-1990s, Hanford’s master plan has been to build a facility to mix and melt the waste with glass flakes to encase the radioactive substances in huge glass logs capable of holding in the radiation for 10,000 years. The basic concept has been to create a pretreatment plant to separate highly radioactive waste from less radioactive, or “low-activity,” waste. A glassification plant would be built for each stream.

Construction of the glassification complex began in 2002. The cost of the project has increased from $4 billion in 2000 to about $17 billion today.

The Department of Ecology and Energy Department have anticipated new delays in the high-level waste glassification facility.

In late 2017, the Energy Department told the state it had concerns about the plants’ costs and design risks, hinting start-up of the low-activity waste plant could be 2024 instead of 2023. However, Dahl and Alex Smith, the Department of Ecology nuclear program manager, recently said in an interview that the state still expects the low-activity waste plant to open in 2023.

In May, Maia Bellon, director of the Department of Ecology, wrote to Ann White, who resigned a few days later as the Energy Department's assistant secretary for environmental management. Bellon expressed concerns that the Energy Department could miss key deadlines. The federal department had agreed to have the main pretreatment plant running by 2033, and the high-level waste treatment plant would be ready by 2036. In September, it told the state it has concerns about meeting those deadlines.

“All this caused extensive heartburn at the state level,” Dahl said

In a statement to Crosscut, an Energy Department spokesperson said “the potential interplay” of otherwise manageable factors in the high-level waste glassification project requires a delay out of “an abundance of caution.” The department did not elaborate on those factors.

Tom Carpenter, executive director of the Seattle-based watchdog organization Hanford Challenge, contended that a major problem is that the Energy Department accepted a flawed approach to the glassification project at the turn of the century.

A basic piece of the project’s design is the use of black cells — sections that will become too radioactive for humans to enter — which would greatly hamper any work to fix inevitable mechanical and chemical troubles or replace equipment. Carpenter said the project should have adopted an approach used in plutonium processing plants built during World War II and the Cold War. Each plant contains a battleship-sized room called a “canyon,” with massive cranes set up to reach and move every piece of radioactive equipment in the massive chamber.

Carpenter also noted that having a single main pretreatment plant is a bottleneck.

The Energy Department is working on building a second, small pretreatment facility for the low-activity waste glassification plant. That quick-to-be-built facility will filter out cesium 137, one of the highly radioactive substances in the tank wastes. The Energy Department hopes that removing the cesium will be enough to convert some highly radioactive wastes to low-activity wastes.

Meanwhile, state officials argue that the feds have not funded the glassification effort at the level everyone agreed, almost two decades ago, was needed to keep the project on schedule.

The glassification complex’s annual budget has held steady at $690 million since the project began, despite predictions that the appropriation needed to be increased to keep construction on track. The state said it does not have a definitive figure on how much the annual budget should have grown; a 2011 Department of Ecology estimate suggested it would need to reach up to $900 million. No increase ever materialized.

Another problem has been the quality of construction.

In 2010, Walt Tamosaitis, an employee of the subcontractor designing the pretreatment plant, URS Corp., told his superiors and managers at lead contractor Bechtel National that several design problems had not been solved.

There was risk of hydrogen gas explosions that could bend and burst pipes in the plant, spraying radioactive fluids. Radioactive sludges could clog the pipes and tanks in the plant, increasing the chance of uncontrolled releases of radiation. And there was a risk of corrosion causing leaks in the pretreatment plant.

Tamosaitis’ superiors told the Energy Department that the design problems were fixed as of July 1, 2010 — over Tamosaitis’s protests but in time for Bechtel to collect a $5 million bonus from the department.

For raising the alarm, Tamosaitis alleges, he was demoted and exiled to an insignificant offsite job. He filed a lawsuit against Bechtel, alleging illegal retaliation, eventually winning a $4.1 million settlement. Meanwhile in 2011 and 2012, the Defense Nuclear Facilities Safety Board, a technical advisory body monitoring the Energy Department, and the General Accounting Office, the investigative arm of Congress, confirmed Tamosaitis’ concerns.

In 2015, the Energy Department announced that it would not have the entire complex operational by the 2022 deadline. It pointed to the same issues Tamosaitis had identified.

Waste will have to be shifted between the tanks before it is funneled into the low-activity waste plant. Water is sometimes sprayed into the tanks to break up solid wastes, another process that requires extra tanks to hold the liquids. At the same time, the specter looms of additional leaks showing up in the inner shells of the double-shell tanks.

Carpenter fears that the continual delays will prompt the feds to give up on glassification and return to a previously rejected cheaper method, encasing waste in concrete grout.

Carpenter said discussions have popped up in federal circles that grout should be considered again as a quicker, cheaper and less-headache-inducing approach. “Their fallback for all of that is concrete. All you hear is ‘grout, grout, grout,’ ” he said.

Concrete has a lifespan of decades, not millennia, before it falls apart, Carpenter said. “It’s not going to last,” he said. “These radionuclides have [lifespans of] hundreds of thousands of years, or even millions of years.”

The state-federal negotiations are tentatively set to be finished no later than July 31.

Clarification: The story has been edited to more accurately present the events surrounding Walt Tamosaitis' complaint. 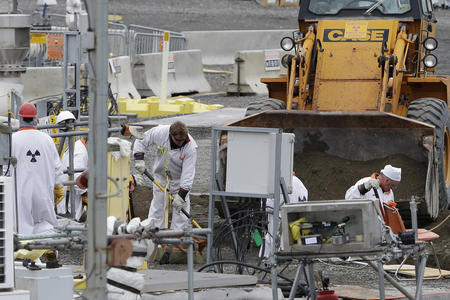 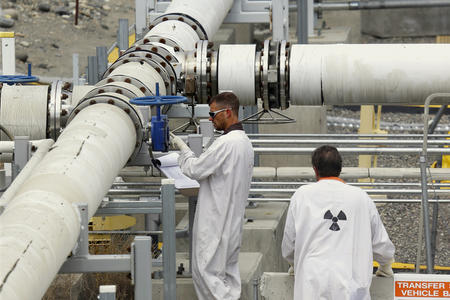 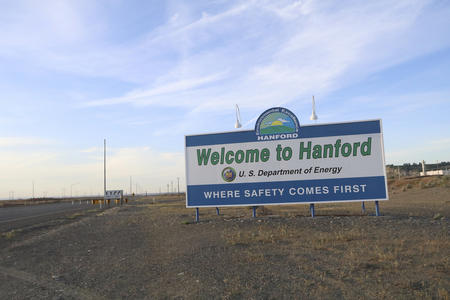