After car-tab cuts, a new bus driver worries for his future

If Initiative 976 survives the courts, it will mean cuts to bus hours and, possibly, staff. 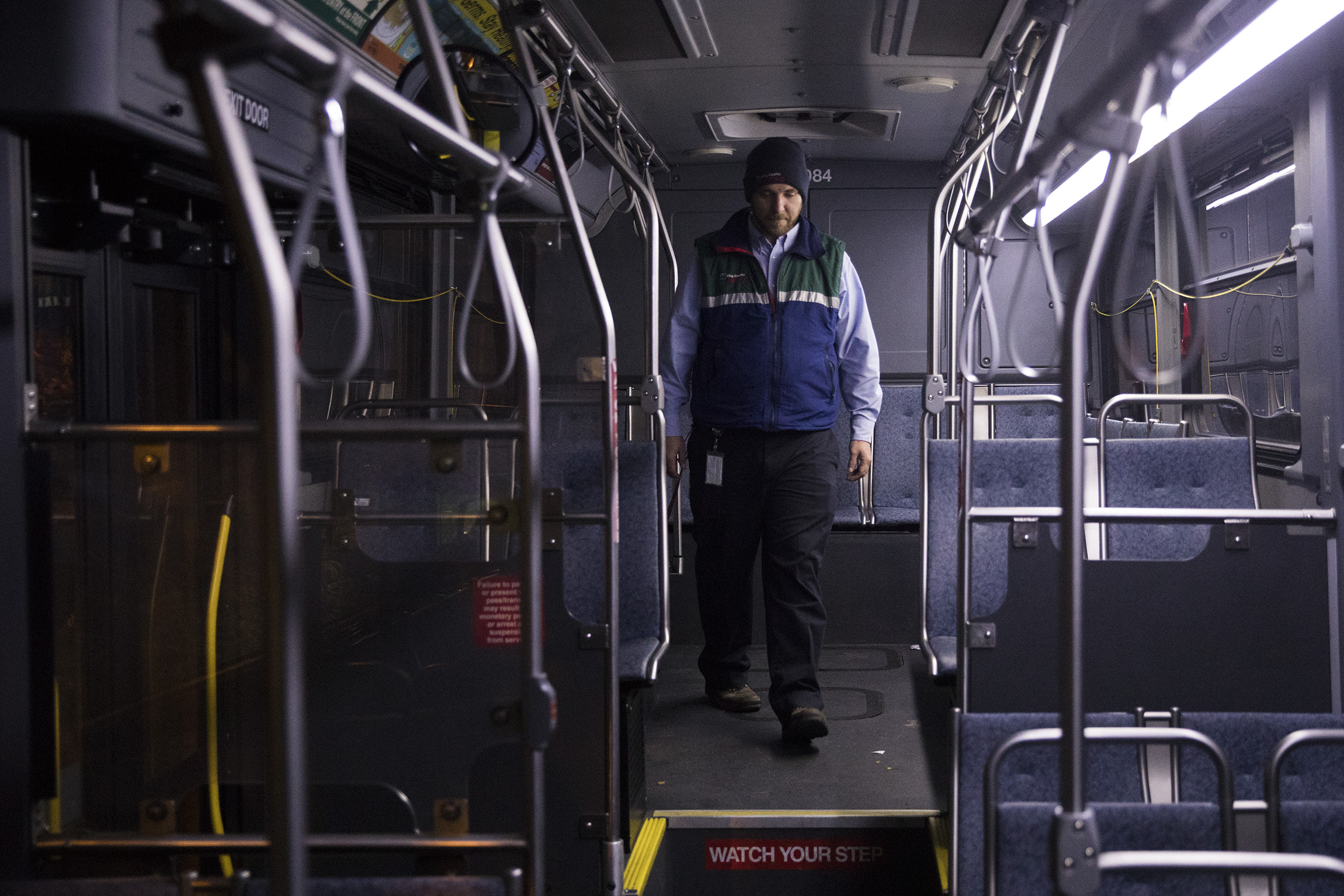 Clay McClure was driving north on 15th Avenue on Beacon Hill when he hit a pothole, rattling his Route 60 bus.

“Can you imagine how many more of those there’d be if they take away funding?” he says, eyes trained toward his windshield.

McClure’s question is one of many being asked throughout Washington state since voters approved Initiative 976 this month. When it takes effect in December, the new law will cut the price of car tabs across the state, capping them at $30.

But McClure’s primary concern regarding I-976 isn’t the smoothness of his ride. Following the statewide initiative’s approval, the King County Metro bus driver's mind is on whether he’ll have a route at all. And as a part-time and relatively new driver, he may have reason to worry.

“It makes me nervous,” he says. “We’re kind of in that limbo period of drivers not knowing exactly what’s going to happen.”

Following a month of training, McClure began as a part-time driver in August, nine months after he applied.

In the hours he’s not driving, McClure, 31, walks other people’s dogs, a job he used to do more regularly. But he missed human interaction and was growing tired of coming home wet and cold during the fall and winter months.

“I am trying to move a little further away from taking care of dogs, because it’s nice to be warm and dry as opposed to wet and soggy all the time,” he says.

Many of his Rainier Beach-area neighbors drive for Metro and they encouraged him to apply. Since he started, he has let many of his dog-walking clients go as he transitioned to driving. In the event he does lose his job, he could resume dog walking, but he’s unsure he would get his clients back. The world of canine care is cutthroat, he says, and his onetime customers have surely found replacement walkers.

Barring legal intervention, the effects of I-976 on King County Metro will be significant. In 2014, Seattle approved a new fee on car tabs to expand bus service in the city. That fee would be wiped out by the new law and could not be replaced. The initiative not only sets all car tabs at $30, but prevents cities like Seattle from asking voters to raise them again on a local level.

That would mean about $24 million worth of bus and transit service would disappear from Seattle. An additional $8 million in road projects would also vanish. Metro has estimated Seattle could lose as many as 175,000 hours of bus service. The city set aside reserve funds in the event voters did not renew the fees after they expired in 2020. But long term, officials would likely need to find alternate sources of funding to sustain transit service.

John Resha, Metro’s assistant general manager for finance and administration, says the agency is still diagnosing what the initiative will mean for bus service and staff. Metro sees frequent turnover, and Resha says the agency may survive simply by not replacing employees who leave. While that's preferable to layoffs, Resha says he’s not thrilled by that prospect either, worried that the recruiting pipeline Metro had worked so hard to build would run dry. 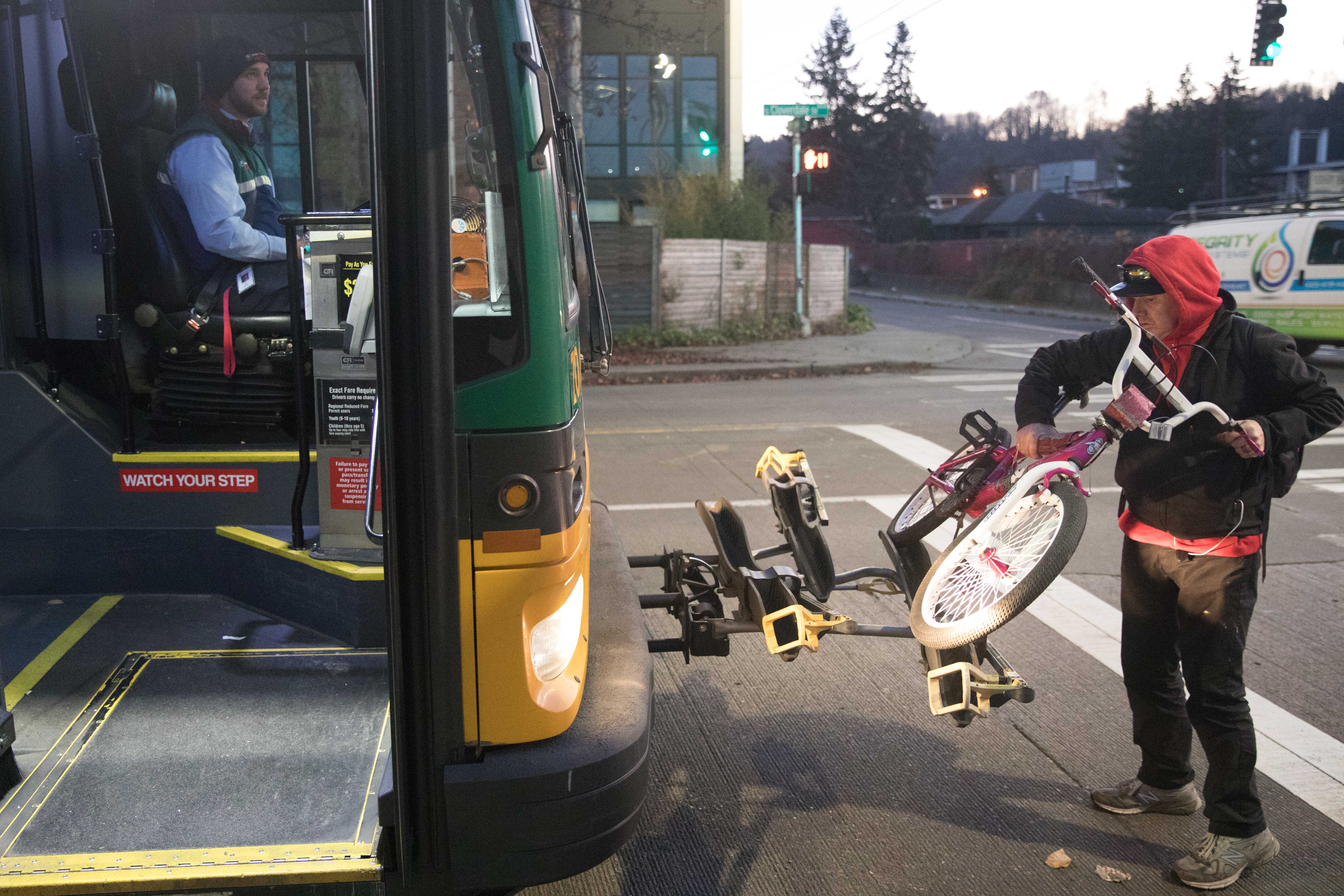 In South Park, a man loads his bike on the front of the bus while Clay McClure waits to embark toward White Center, where the route will end and he will head north again for Capitol Hill. (Matt M. McKnight/Crosscut)

In South Park, a man loads his bike on the front of the bus while Clay McClure waits to embark toward White Center, where the route will end and he will head north again for Capitol Hill. (Matt M. McKnight/Crosscut)

If the math doesn’t work out, however, there could be cuts.

“What does that mean to the driver on the street? We could see reductions in our head count,” Resha says.

“Of course as a new driver who is part time, I assume I’m the first on the chopping block,” McClure says.

He adds that he’s trying to not think about it too much. “I don’t know the details specifically because I just don’t want to be looking into that,” he says. “Because the more I know the scarier it can be.”

In addition to his work in dog care, McClure also worked as a delivery driver for FedEx and before that picked up railroad crews in remote places when their shifts had ended.

But in many ways, it’s his experience volunteering in a homeless shelter when he was younger that’s best prepared him for his current work. Like librarians or parks staff, bus drivers require something of a social worker’s skillset, in addition to the basics of driving a bus. On every shift he’s exposed to and communicating directly with the full range of people who live in Seattle.

Not only is McClure vulnerable as an individual, but his current route could see cuts as well.

At the beginning of his shift, McClure takes over the No. 60 route on Beacon Hill, near the light rail station. From about 4 p.m. to just after 8 p.m., he guides the bus south to Georgetown, South Park and White Center. He takes a quick break at Westwood Village — about 25 minutes, if the route was on time; less for every minute the bus was behind schedule — and loops back. He then drives north to Capitol Hill before returning to where he began, wishing passengers “have a great day” along the way.

The 60 recently received a bump in service from the licensing fees, and buses now arrive every 15 minutes at a given stop. But the route is on the list of over 70 routes that could see cuts.

Seattle, King County and a number of other government agencies have sued to block the implementation of 976. They claim the initiative was misleading, violated the state rule that laws must address a single subject and is unconstitutional for negating voter-approved tax hikes at a local level.

Tim Eyman, who put the bill on the ballot, has countered that Seattle is trying to undermine the will of the voters who feel overburdened by expensive car tabs.

A King County Superior Court judge will decide next week whether to pause the initiative’s implementation as it moves through the legal process.

At the base, McClure says most drivers are just carrying on as normal. It’s a way to stay sane, but it’s also confusing. He toggles between “when” and “if” when referring to the possibility of his job getting cut.

“That limbo is just daunting,” he says, adding, “I think that a lot of drivers, including myself, are kind of just hoping that things will shake out and end up well because often times it’s going to be a big make or break for the drivers.” 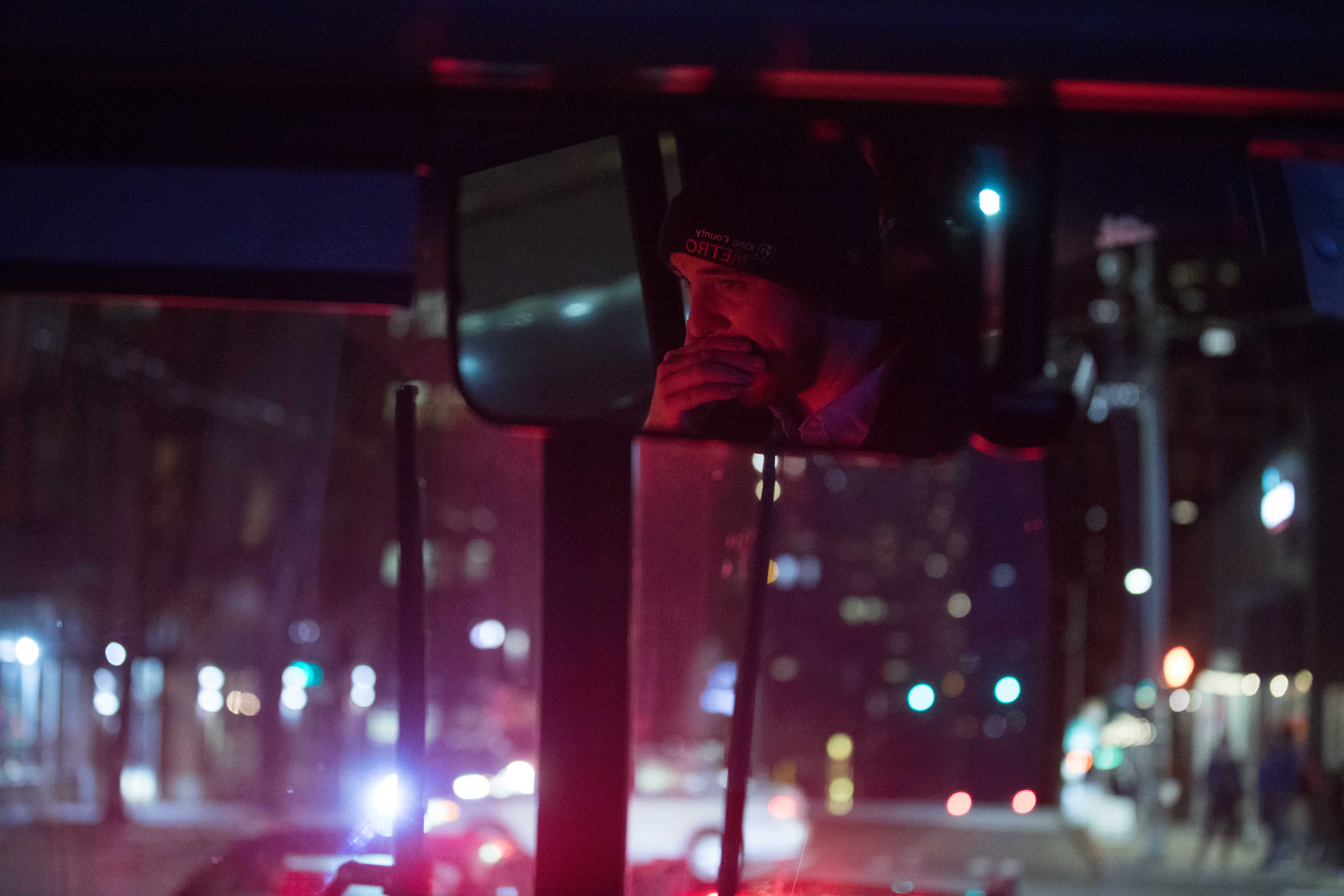