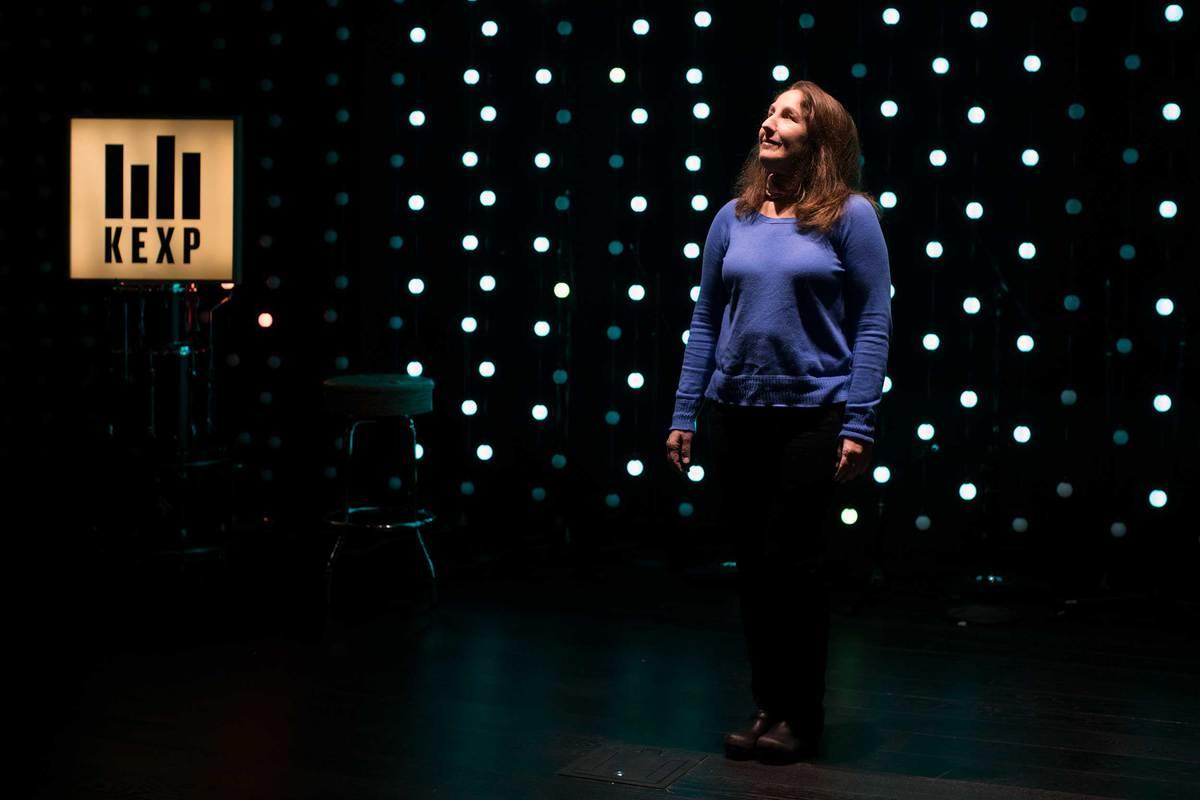 For Cheryl Waters, it’s routine. She’s done this at least 5,000 times: Gently open the studio doors. Put the headphones on. Bring the mic close and welcome listeners to “The Midday Show.”

But before she went on air last Monday at 10 a.m., the KEXP radio host felt exceptionally nervous. Some of that was excitement about interviewing Brittany Howard, the Grammy-winning solo musician and former lead vocalist/guitarist of the rock band Alabama Shakes, who Waters believes will be a “legend one day.”

Most of Waters’ unease, however, centered on the news she’d have to share with listeners. She hadn’t been vacationing somewhere for three weeks. She’d been recovering from a surgery to remove a cancerous growth from her tongue as well as 36 lymph nodes in her neck. She would soon have to go off the air again for weeks of radiation.

“I knew in my heart that the listeners would embrace [me], but it felt vulnerable and scary,” Waters says, sitting in a vacant, dimly lit studio at KEXP on a recent morning ahead of her show.

In the silence of the soundproofed studio, as well as on the mic, Waters’ S’s and T’s land with a slight lisp, a consequence of the surgery, which “cut out a chunk” of her tongue, as she puts it. She hopes her altered speech will be temporary, with the help of a speech therapist.

It’s really sort of a cruel thing that someone who makes their living speaking gets tongue cancer.”
— Cheryl Waters

“I have all kinds of little tongue exercises. MAY, ME, MY, MO, MU,” Waters enunciates exaggeratedly. “That makes my mom laugh. I do that for her on FaceTime.”

She says this with a smile, the hint of a chuckle in her voice. But in truth, she’s “pissed.” Pissed that she has cancer again, after a double mastectomy, hysterectomy and radiation and chemotherapy for breast cancer six years ago. Pissed that this cancer strikes her speech, her articulation, her job and, to a certain extent, who she is.

“It’s really sort of a cruel thing that someone who makes their living speaking gets tongue cancer,” she says.

“But I feel really lucky that both of my cancers were treatable,” she adds. She’s also thankful that she has “a thousand sick-days.” And health care. “So, so many people are not that lucky,” she says. It’s the only time during the interview Waters gets teary-eyed.

Technically, she’s cancer-free. But next week, she’ll embark on a couple of months of sick leave to go through radiation — which will make talking and swallowing harder and more painful, but will shrink the chance of recurrence significantly — and allow time for recovery.

Her upcoming absence will mark the longest period of time Waters has ever been away from the mic, or from KEXP, in her 25 years with the station.

She started her first night shift as a volunteer at the station (then known as KCMU) in April 1994 while working as an environmental scientist by day. Her gentle voice has filled Seattle’s airwaves ever since.

In many ways, Waters has grown up with the public radio station. She’s seen it change its name to KEXP (after a partnership was formed with Paul Allen’s Experience Music Project, now MoPOP), move to an expansive facility at Seattle Center and grow its broadcast radius from 15 miles to the whole world, thanks to the internet.

Since then, Waters has grown into one of the station’s most recognizable voices. As the curator and booker of most of the station’s in-studio and other broadcast performances, she’s also helped craft KEXP’s identity as the independent tastemaker for alternative and emerging music.

“She is a treasure,” fellow KEXP and “The Morning Show” DJ John Richards says about Waters. “I think she should get more credit. Not just in this town, but in general. In radio.”

When he trains new DJs, Richards points to Waters as the leading example. “I don’t know a more steady person on the microphone than Cheryl,” he says. “Nothing fazes her. Her cancer doesn't faze her. She’s still on the air. She always talks about how I do these hard shows about grief and about all these other things, but she is solid on the air, no matter what's going on in her or anybody else’s world.”

That she’s able to do that while letting her personality to come through, that’s talent, Richards says.

Though Waters describes herself as a private person, she and Richards are close, “chosen family,” as Richards put it. When Waters was first diagnosed with cancer in 2013, Richards was the first person she told, and he was the one who broke the news to the KEXP staff. Waters was one of the first to visit Richards after his children were born, and was beloved by his mother, who passed away 15 years ago.

Richards’ decision to be “brutally honest” on air about his grief over his mother’s death sparked the now-annual grief and death-themed “Mom Show.” It also opened the doors to KEXP’s subsequent “Music Heals” series. These daylong shows are each dedicated to life’s hardships, whether depression, anxiety, addiction or cancer, all under the reassuring banner of “You are not alone.”

In some ways, it was the death of Richards's mother that ultimately led to Waters’ sharing the news of her cancer with millions of listeners last week.

“People are looking for a place not just to hear music, but to be presented by people they trust, people they know and can relate to and have issues like they have,” Richards says. He believes that openness is what makes KEXP unique. “DJs are for the most part fake on the air. They’re not their real personalities.”

KEXP listeners have come to expect this honesty. They feel like they really know the hosts, Waters says.

“Even though it was really scary … there was just no way that I couldn't share [the cancer diagnosis] with people — be gone for a period of time and just leave them wondering what was going on,” Waters says. “They are an important part of my life, and they let me know how important I am to their lives as well.”

After she shared the news of her breast cancer in 2013, the outpouring of support from listeners was overwhelming. One person sent her a card every week throughout her nine months of treatment.

“The listeners were with me the entire time, every step of the way,” she says.

While Waters didn’t work full-time during radiation and chemo six years ago, she did continue hosting her four-hour show on air. This time around that won’t be possible. Radiation will make it increasingly difficult to speak and swallow.

Taking time away from her job will be challenging. But she’ll go on long walks, she says, and might even be back at KEXP — even if only to listen, or join Richards in the studio to share updates.

Waters should be back on the air full-time in late January or early February. In March, she’ll host another day full of music and stories during “Music Heals: Beyond Cancer — an emotionally charged anchor point to look forward to, she says. She’ll ask Richards to co-host.

“It’ll be pretty raw for me,” she says. “To be so fresh with that and then also reading these messages from listeners, that’ll be challenging. John can support me through that. He’ll be a security blanket for me.”

But she can already imagine how she’ll feel at the end of that day. “We say this now all the time, but ‘you are not alone.’ It’s such a simple phrase, but it’s very meaningful. It’s so important to feel that you’re not alone.”