The death of Seattle's self-declared wokeness

Tuesday's election laid bare the thin pretense behind the notion that this city is a beacon for tolerance. 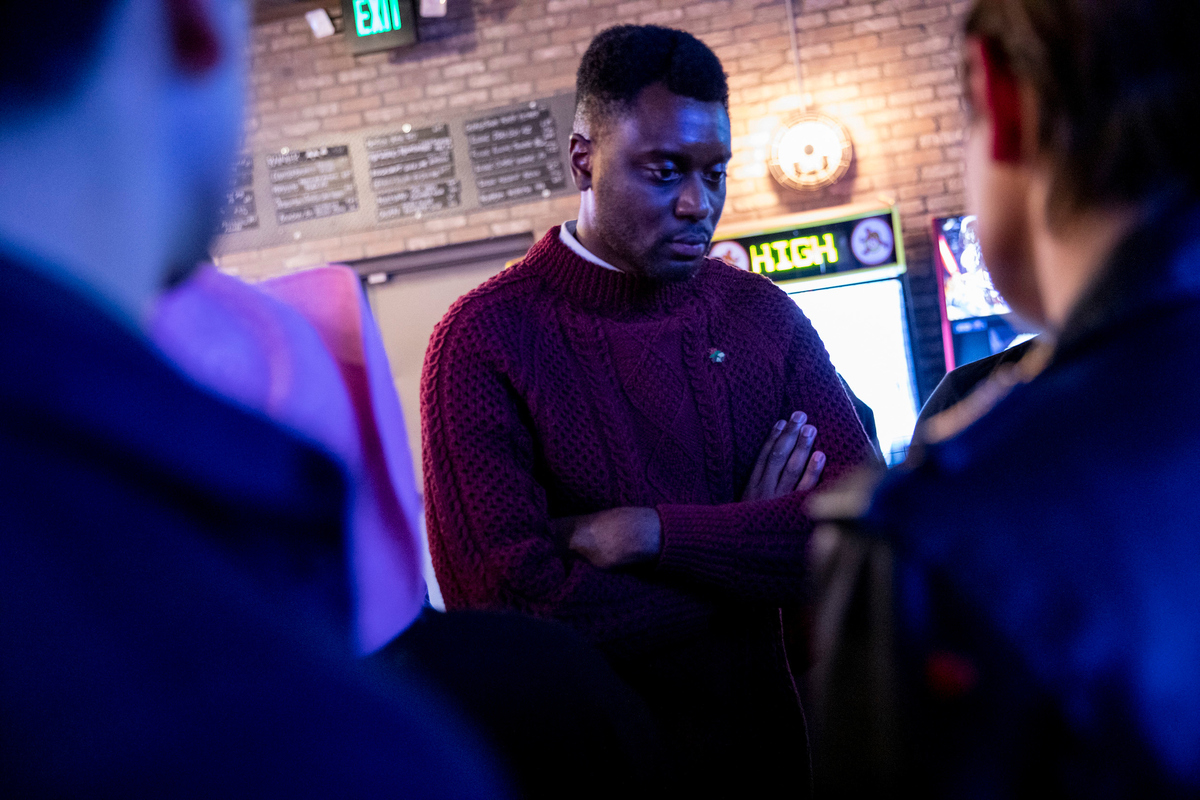 Shaun Scott, candidate for Seattle City Council District 4, and his staff learn the preliminary results during his election night party at The Westy Roosevelt in Seattle on Nov. 5, 2019. Ahead of the election, one of Scott's campaign signs was defiled with a racist attack. (Dorothy Edwards/Crosscut)

Yesterday was one of those chamber of commerce fall days at Hing Hay Park in Seattle’s Chinatown-International District, the kind brimming with blue skies, crisp air and a concomitant hope. Those of us who’ve grown up here recognize that hope as a false one. From experience, we know the storms and other disruptions of winter are not far behind.

There likewise was a hope being peddled in Hing Hay by a troop of community leaders of color behind a lectern emblazoned with the words, “We will not be divided.” And amid the usual neighborhood bustle, Harborview-bound medical helicopters and park department leaf blowers, the disruptions came early and often. It was as if the city itself clamored to quell the optimistic messages of healing.

Which felt about right. The previous day’s local elections had concluded the most rancorous campaign I can remember in these parts. Even if a few too-close-to-call races eventually summon the most optimistic results, the margins will be so razor thin and the rhetoric leading to them so divisive, I cannot feel much hope.

Even if the state ends the embarrassment of a 20-year ban against affirmative action, even if District 3 repels the advances of Amazon and reelects Kshama Sawant to the Seattle City Council, the place feels different, like the lie of a sunny day in front of months of joy-sucking dreariness.

The corporate forces brought to bear to maintain the white supremacist status quo in this city, the conflation of recent Chinese immigrants and mainstream Asian Americans politics to jam a wedge into the region’s longstanding civil rights coalition and the racist indignities aimed at council candidate Shaun Scott, a Black socialist, all served to rip away any pretense of this so-called liberal bastion as a beacon for tolerance. Many of us have felt this to be a racially hostile place, in spite of its self-declared wokeness. And now it’s out in the open.

Malcolm X once described President John F. Kennedy’s assassination as the “chickens coming home to roost.” He later clarified that he meant the vile act was the product of a “climate of hate.” It’s difficult not to feel both sentiments here and now.

“Washington should be a place where prosperity is widely shared,” said Heather Villanueva, deputy director of More Equitable Democracy, “but the powerful and greedy and special interests continue to try and divide our communities against each other by race and national origin, and by scapegoating the working poor, seniors, veterans and women.”

Seattle’s white political infrastructure failed us miserably the past few months. I recently wrote that, because of the nuance in our language, recent immigrants often do not grasp the difference between equality and equity and their application to affirmative action. I should have been more inclusive in that assessment. I saw and heard numerous instances of mainstream journalists getting it wrong. I was stunned when, on the eve of the elections, I heard a reporter from a major daily outlet say on a public-access program that affirmative action allows “women and people of color to get some sort of edge” in hiring, contracting and higher education (which, of course, would remain illegal under I-1000). That same reporter went further, saying that affirmative action “will boost people of color, yet opponents are people of color who say, ‘We don’t want this.’ ”

“We have spent far too long, because we've had so many years of progress, assuming that people understand what equity and inclusion actually mean for an economy,” Monisha Harrell, chair of Equal Rights Washington, said in an interview. “It will grow economies, it will grow the pie so that everybody can share from it. The scarcity argument creates fear that makes people want to push back on these sorts of efforts. I know that people don't always like to talk about equity and inclusion because they consider it impolite. But fear festers in the lack of having these conversations.”

The fear of talking about race or economic inequality or homophobic hatred stymied the white liberal gentry in Seattle. I find utterly empty the argument that Amazon did not get the sought-after bang for its bucks. That fails to grasp that corporate Seattle’s most targeted council candidate, Sawant, was an immigrant woman of color, a veritable troika of marginalization. Worse that Sawant represents a district best known as Ustabee — as in ustabee the CD, ustabee Black, ustabee just. No matter her politics or personal style, Sawant didn’t deserve to be pushed out by rampant corporate interests, blind to the people chewed up in its greedy wake.

Some believe the machinations of corporate Seattle exposed a flaw in our electoral financing that even new council members will be motivated to fix. I find it difficult to keep that kind of faith when someone like Egan Orion bemoaned the amount of corporate contributions he received. I have visions of Jeff Bezos forcing dollar bills into Orion’s throat.

As such, I’m stunned that District 3 did not rally, if not for Sawant, at least against Amazon, the way progressives did in Queens a year ago when the corporate behemoth tried to set up shop there. Some, including Harrell, suggest that Queens and other would-be Amazonian conquests held up Seattle as a cautionary tale. True, but so did we.

State Sen. Rebecca Saldaña, D-Seattle, says that, as she has studied the origins of the Pacific Northwest, she can’t help but believe that our inequities are deeply rooted.

“Oregon clearly was built to be a white state,” she said in an interview. “In Washington, our founders were more sophisticated. They did not use the words ‘white only,’ but they baked into our constitution the right of white property owners of the land they stole from Indigenous people. They embedded into our constitution an unfair taxing system. It makes me think that it was very intentional to benefit the few new white settlers at the expense of the Native populations at the time and the immigrant workers who built this city.”

Centuries have passed, but Saldaña contends that the sentiments born, and mechanisms erected, in a white supremacist foundation have not.

“Our constitution hasn't changed,” she said. “And the fundamental structure of our constitution has not changed. We have some great civil rights policies in place here in Washington state, but they were add-ons to a foundation that has some major, major flaws.”

Those cracks in our foundation were laid bare on a day so clear, you could see the murky future of those who have been so othered that they may not have had the faith to cast a ballot in their own interest. You also could see the battle lines drawn for an even more transformational election in 2020.

“As a region and, quite honestly, as a country, we're fighting for the soul of who we are and who we want to be,” Monisha Harrell said. “And for as much progress as we have made, it's only temporary if we don't protect it.”