Awkward political conversation was also on the menu. 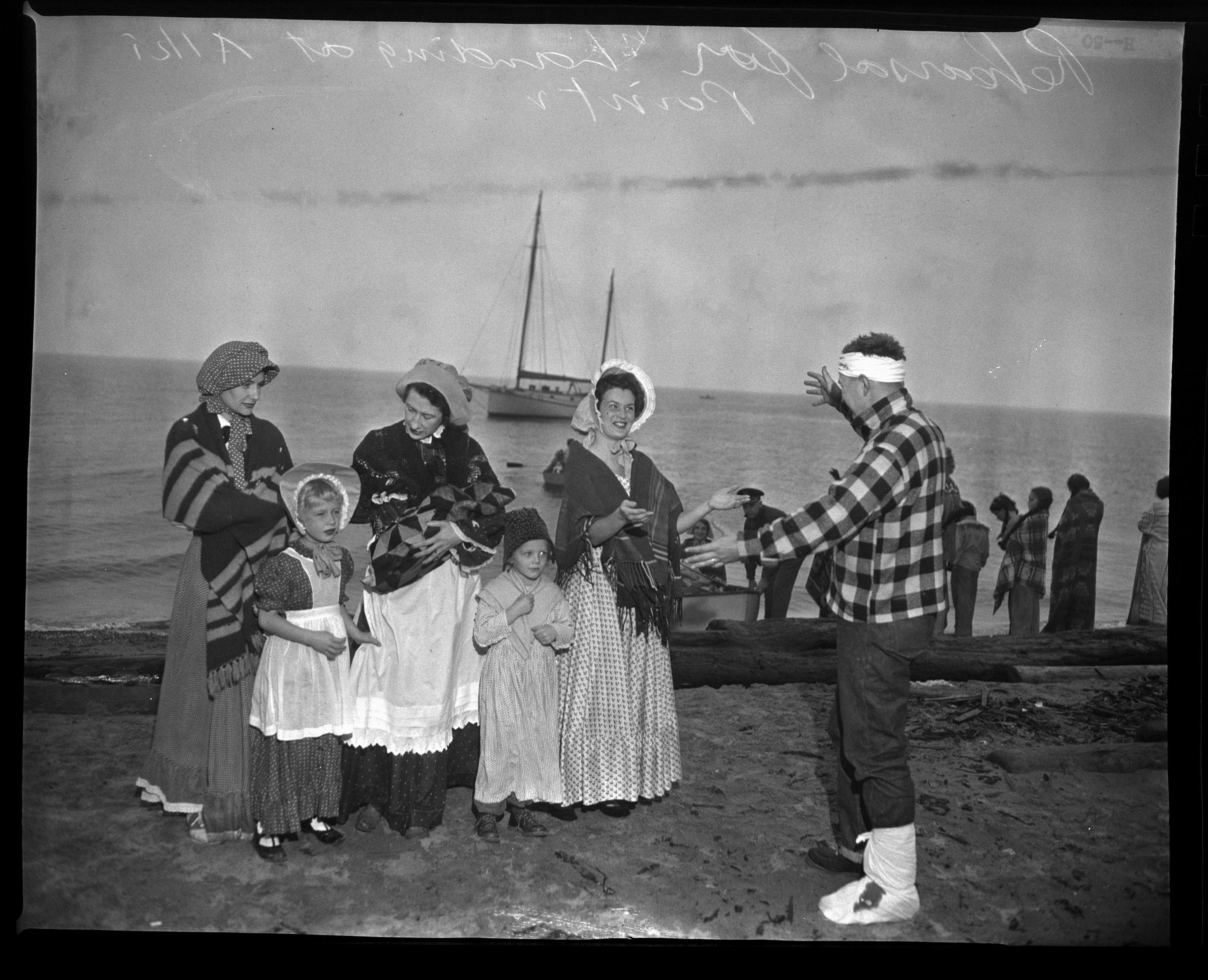 In 1951, a group celebrated the centennial of white settlers’ arrival at Alki Point by reenacting the Denny party’s landing by canoe. Robert Jensen portrayed David T. Denny, greeting women and children dressed in sun bonnets. In the background is a stand-in for the schooner Exact, which carried the settlers to Seattle from Portland, Oregon. (Museum of History and Industry photograph collection).

For an upcoming episode of Mossback’s Northwest, I’ve been doing some digging on frontier food traditions of the Puget Sound region. As part of my research, I searched through the archives of historic newspapers that have been digitized by the Washington State Library. This being the season, I started poking around for what early settlers here ate for Thanksgiving, at least as recorded by the media of the day.

Thanksgiving (with a capital “T”) has been part of culture here since the first pioneers arrived, bringing with them East Coast traditions. Early on, Thanksgiving was not an official national holiday, but many people celebrated it. It usually involved going to church, followed by a feast, often a community dance or ball.

The arrival of the Denny Party at Alki was sometimes compared to the arrival of the Pilgrims at Plymouth, with Alki Beach standing in for Plymouth Rock. (Historian Coll Thrush discusses the conscious myth-building of “Seattle’s Pilgrims” in his excellent book, Native Seattle.) Certainly, the Salish peoples helped the settlers get settled. Chief Seattle even extended them an invitation.

It should be noted that the pioneers did not have a monopoly on ceremonies and feasting related to being thankful. Indigenous peoples throughout the region had ceremonies connected with the return of salmon and the ripening and harvest of berries, for example — thanksgiving ceremonies that, as one Salish elder said, took place “before Columbus.”

Also worth noting: turkeys are not native to Washington. The first attempt to raise them commercially didn’t occur until 1860s. And they didn’t appear regularly on Thanksgiving menus around here until the 1870s because wild game birds were abundant east and west of the Cascades, according to Jacqueline B. Williams’ book, The Way We Ate: Pacific Northwest Cooking, 1843-1900. The first attempts to introduce wild turkeys to the Northwest date to around 1900, according to the Washington Department of Fish and Wildlife.

So, residents of frontier Seattle in 1856 enjoyed a feast of roasted wild ducks and geese, which could be sourced from the waters and marshlands at the mouth of the Duwamish River. The pioneers had much to be grateful for, it was said.

An 1858 Washington territorial newspaper reported that for Thanksgiving, residents of Washington “have abundant cause for thankfulness, in the happy termination of Indian troubles, the rich harvests, and the general prosperity pervading all classes and groups….” Native peoples, however, might have questioned this characterization.

The mid-to-late 19th century also saw a kind of mania for fresh oysters. In the Northwest, that meant eating an abundance of the tiny, native Olympia oysters, which became a primary export product. An 1885 cookbook written and published by Presbyterian women in Portland (Web-foot Cookbook) suggested adding “chopped oysters” to a turkey dressing of breadcrumbs, salt, pepper, sage and a well-beaten egg. Most stuffing recipes also included butter, and the common measure referred to throughout the book was often a lump “the size of an egg.” Presumably a chicken egg, not an ostrich one.

Sometimes early Thanksgivings had Gothic elements. In Snohomish in 1876, the night before Thanksgiving featured a mass slaughter of chickens for the traditional feast. “The death shriek of many an ancient biddy rent the evening air,” a local paper reported.

Conversation at gatherings could also be awkward, apparently. The Port Townsend Argus in 1871 said that a Thanksgiving ball was pleasurable, for the men at least, in part because “the subject of women’s suffrage was never mentioned.”

But food was always the star, as evidenced by a Thanksgiving song lyric printed in a Steilacoom newspaper in 1861:

Come forward and seize them without ifs and buts;

Bring none of your slim appetites here—

Thanksgiving Day comes only once a year.”