"His mandate from the president was to go make deals." 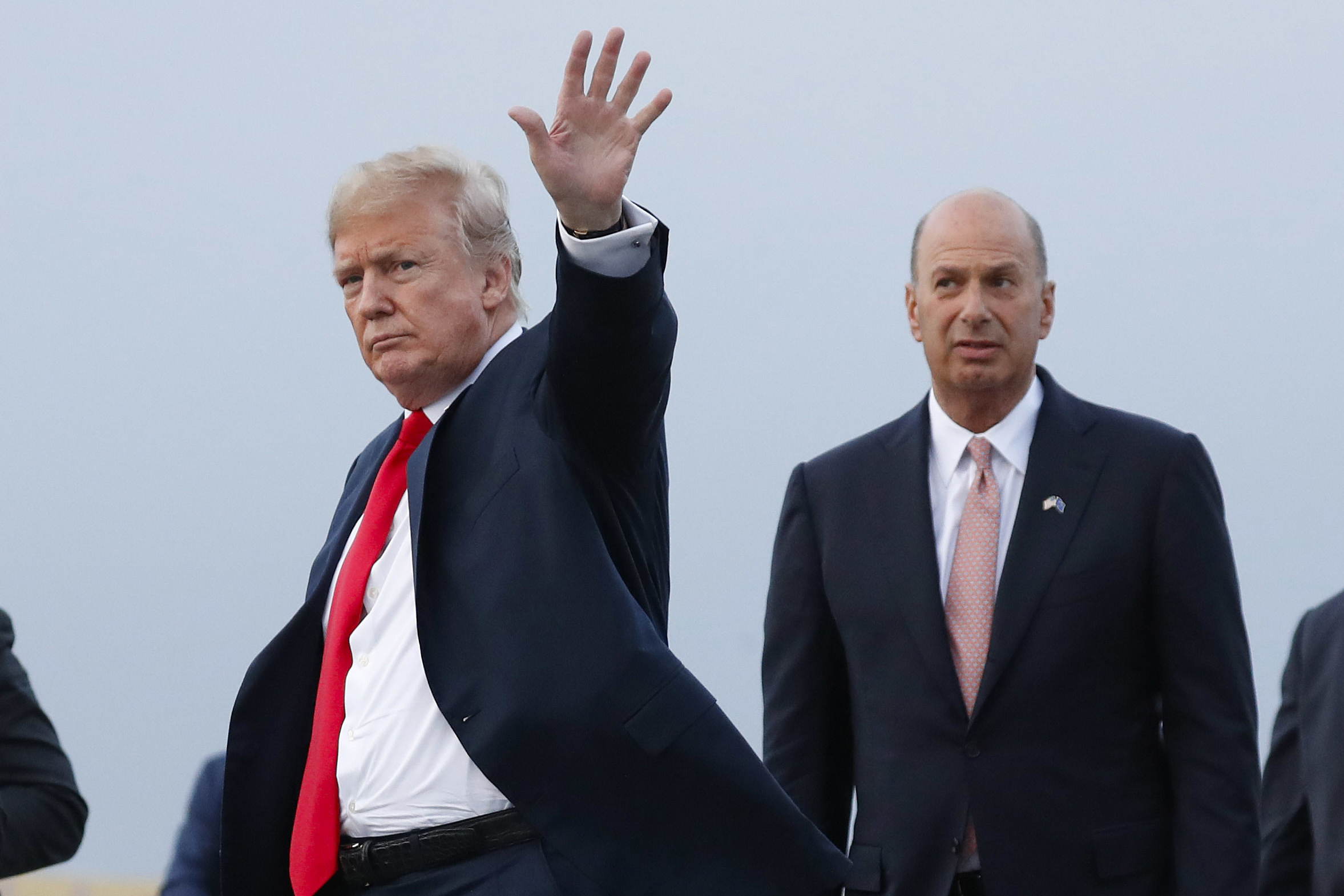 In this July 10, 2018, file photo, President Donald Trump is joined by Gordon Sondland, the U.S. ambassador to the European Union, second from right, as he arrives at Melsbroek Air Base, in Brussels, Belgium. Sondland is expected to tell House lawmakers conducting an impeachment inquiry that he was merely repeating President Donald Trump’s reassurances when he told another envoy that there was no quid pro quo in the administration’s dealings with Ukraine. (Pablo Martinez Monsivais/AP)

If there is a single word that describes both President Donald Trump and Gordon Sondland, his ambassador to the European Union, it is “transactional.” The art of negotiating a business deal, in which both men are skilled, is all about exchanging promises and delivering support.

Sondland was quoted by one of the State Department witnesses testifying at the House impeachment hearing as explaining that when businessmen close a deal, they don’t sign the check until the goods are delivered. There is always a “deliverable,” such as an investigation of the Bidens. President Volodymyr Zelenskiy of Ukraine was prompted to deliver a television statement that such an investigation would take place, but before he could comply, the whole deal collapsed with a whistleblower complaint.

But international relations are not the same as transactions Trump and Sondland carried out in their business dealings in hotels and real estate, Sondland in Seattle and Portland. “All diplomacy in some respects is transactional, but Donald Trump is transactional in a way that is not so much about what’s good for American interests, it’s what’s good for Donald Trump personally and financially — and in the case of Ukraine, what’s good for Donald Trump’s personal political interests,” said Bruce Jentleson, a professor of political science and international relations at Duke University’s Sanford School of Public Policy, in an excellent analysis by the Christian Science Monitor.

Personal conversations with Oregon contacts and a review of media coverage point to elements that bond Trump and Sondland; despite Trump’s statement that he “hardly knows the gentleman,” there is plenty of evidence he does, including Sondland’s ability to dial up the White House and talk to Trump.

Stream the impeachment hearings at KCTS9.org

But a review of the evidence also tells me Sondland does not share the dark side of Trump: the racism and xenophobia, the antagonism to strong women and a lack of empathy. Sondland is a better man, and on Wednesday he will ultimately be forced to decide between his human values and the transactional deal that brought him to Trump’s administration. Trump delivered the ambassadorship that Sondland coveted; in turn Sondland strived mightily to deliver the Zelenskiy deal that Trump coveted. Sondland’s conflicting testimony in two earlier depositions forces him on Wednesday to fess up and tell the whole truth and nothing but the truth.

Will he do that, or will he attempt to dodge questions and risk perjury? I don’t know the man personally; he appeared in Oregon politics long after I left, but there are reasons to think he will be forthright, at the risk of a massive Trump tweetstorm and ruthless Republican pushback.

Like other witnesses in this saga (Alexander Vindman, Marie Yovanovitch), Sondland is a product of the Stalin-Hitler era. His parents, German Jews, fled to Uruguay and eventually wound up in Seattle, where Sondland grew up and started his hotel chain by purchasing the bankrupt Roosevelt Hotel as a 28-year-old University of Washington dropout. He expanded later to Portland, where Provenance Hotels now owns or manages a number of hotels.

He became a successful businessman (he is a multimillionaire) and married a successful real estate developer (and registered Democrat) Katherine Durant. They began to move in Oregon political circles in the early 2000s, giving money to Democrats at the state level, but Republicans nationally. Democratic Gov. Ted Kulongoski (2003-2011) appointed Durant to the prestigious and very important Oregon Investment Council, which oversees a $100 billion pension fund for public employees. Sondland was named to the Oregon Film Board, which plays a big role in the state’s work with film producers.

In Oregon political circles, Sondland zeroed in at the top and was close to both Kulongoski and his successor, John Kitzhaber (2011-2015). A large self-confident and successful man, Sondland gravitated toward power. “‘He’s a divining rod for people with political power,” an associate of Kulongoski’s said of Sondland in an interview with Fortune magazine. “If you walk into a crowded room and you’re looking for the most powerful person, look for Gordon, because you know he’s tall and he’ll be within 5 feet of them.”

If Oregon’s Democratic politics drew the power couple to Kulongoski and Kitzhaber, at the national level, Sondland’s allegiance was Republican, supporting presidential nominees John McCain and Mitt Romney. In 2016 he backed Florida Gov. Jeb Bush. When Bush failed, Sondland began to help the nominee-apparent, Donald Trump. He signed up as a sponsor for a big Seattle fundraiser that August. But he abruptly withdrew, and that says something about the man.

When Trump savagely attacked the Muslim family of an American soldier killed in Iraq, Sondland split with the candidate. “In light of Mr. Trump’s treatment of the Khan family and the fact that his constantly evolving positions diverge from their personal beliefs and values on so many levels, neither Mr. Sondland nor Bashar Wali can support Trump’s candidacy,” an announcement from Provenance Hotels stated. Wali, a Muslim immigrant from Syria, is president of Provenance and very close to Sondland.

Sondland later contributed a million dollars to Trump’s inaugural and got his ambassadorship — transactional politics at work. The ambassadorship may well have resulted from Sondland’s relationship with Reince Priebus, Trump’s first chief of staff, with whom Sondland worked as a donor and ‘bundler” for Republican candidates when Priebus was Republican National Committee chair.

Sondland surely must have realized that his withdrawal from Trump’s Seattle fundraiser would hurt his ambassadorial ambitions if Trump won office. But in the best of transactional politics, he dug down and gave big when Trump was elected. The fundraiser incident is evidence, however, that Sondland does not share much of Trump’s dark side, anti-Muslim prejudice in particular.

The Sondland-Durant duo have also made a mark in Portland public affairs, including large donations to the Portland Art Museum and Oregon Harbor of Hope, a program for the homeless. Sondland is not without critics at home; he maintains a Seattle hotel as his official residence for tax purposes, avoiding most of Oregon’s income tax, and he has been known to have sharp elbows in Portland real estate dealings. (Willamette Week’s Nigel Jaquiss is a source for much of this personal history).

His personal demeanor and experience both help and hurt him in his relationship with Trumpworld. “His mandate from the president was to go make deals,” was the analysis of Tim Morrison, a National Security Council official, in written testimony to Congress. That appears to be the linkage between the two men; both understand the transaction of deals — but until 2017, those deals were always private business deals.

Sondland, like Trump, did not understand or did not concern himself with all the other aspects of international relations and their nuances. Even at home, Sondland was viewed as naïve about the workings of government at large. More of an intellect than Trump, Sondland also carried some of the bluntness and bluster of the art of the deal into his federal appointment. An example would be his infamous cellphone call to the president from a restaurant in Kyiv, now at the center of the investigation.

Several things are emblematic. The very idea of picking up an unsecured telephone in a popular restaurant in Kyiv — where Russian surveillance and spies are almost certainly underfoot — and calling the president of the United States is mind-boggling. So is the fact that he was patched through directly to Trump. Hello, Putin, how is the reception? This is emblematic of Sondland’s self-confidence and ego. So is holding the phone away from his ear so diplomats at the table could hear Trump — and be impressed. Also emblematic and almost unbelievable is Sondland’s purported greeting of Trump: “He [President Zelenskiy] loves your ass,” and will do anything to help. The vulgarism may be typical of both Trump and Sondland, but it staggers the mind and can only be based on what Sondland at least believes is a very close personal connection. Look for that to be dynamited by the White House.

How does a businessman whose image at home has been relatively benign, if at times controversial, find himself in this sort of hot water, with the heat being turned up by both parties? “It’s the nature of the battlefield,” a friend explained, based on his knowledge of the man — a nice way of saying that Sondland is in way over his head, because he was trying to bring the “deliverables” that Trump wanted as a reward for the ambassadorship.

Sondland is now toast in Washington, D.C., so far under the bus that he can see the crankshaft. He still has a salvageable reputation in his native Pacific Northwest if he takes the full plunge and tells everything he knows about Trump and the deal-gone-wrong he was caught up in while trying to deliver to the transactional president.

This article originally appeared at PostAlley.