Leaf blowers? Not in my backyard

After a bruising election cycle, it’s time for Seattle to unite around a common enemy. 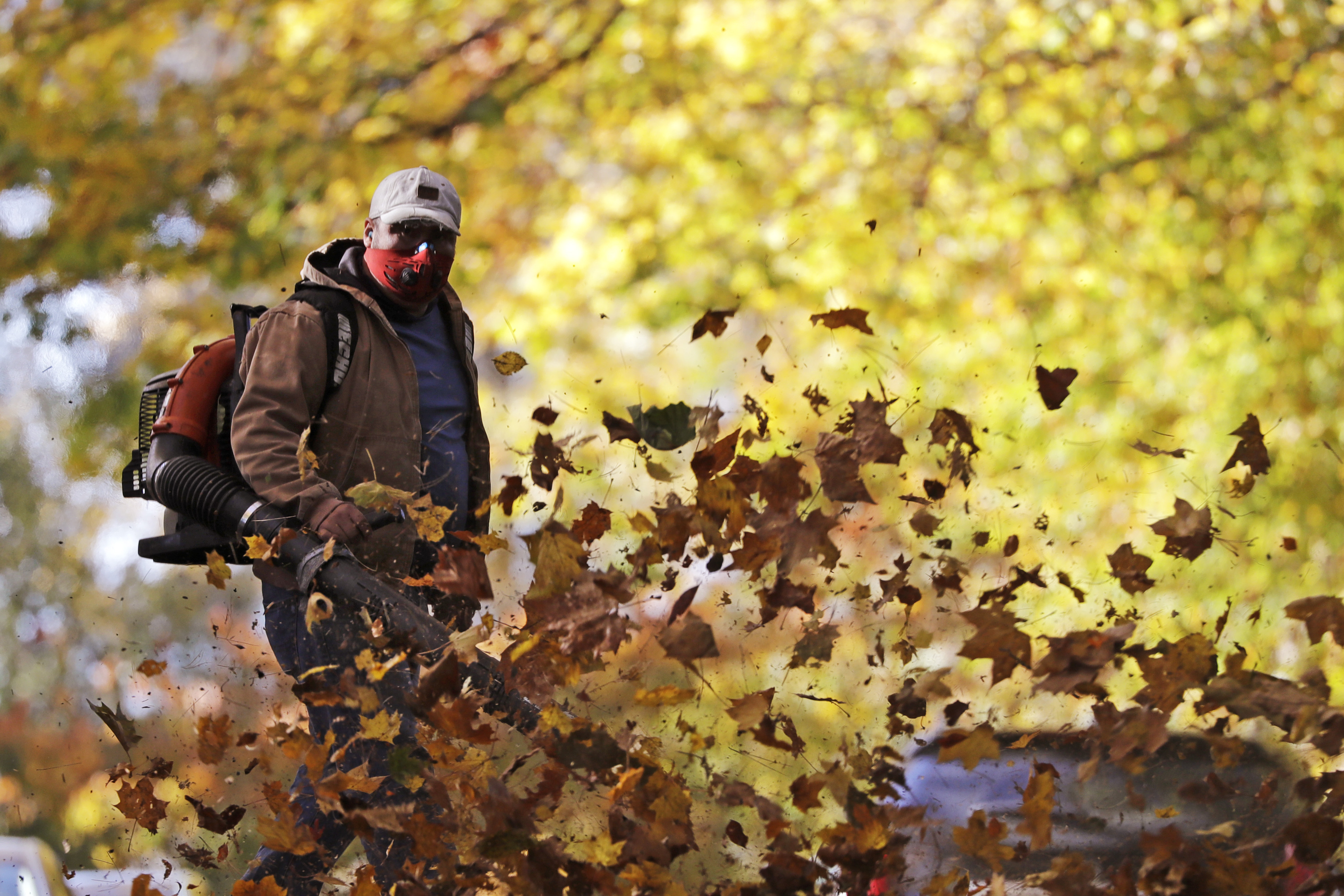 A leaf blower clears fallen leaves from a street as he works under a canopy of autumn color Monday, Oct. 28, 2019, in Seattle. (Elaine Thompson/AP)

Whisk, whisk. The peaceful, rhythmic sound of raking leaves. I have vivid memories of that sound from my childhood in upstate New York. The sprawling yard around our house was shaded by red and white oaks, and starting in September they let loose, scattering acorns and crisp, ruddy brown, deeply lobed leaves. We raked the leaves into heaps, then onto a tarpaulin, and dragged them up to the compost or over to the rope swing in the adjacent lot.

I learned early on that leaf piles, like clouds, are not as soft and substantial as they appear; drop into anything short of a great mountain of leaves, and you’re headed for a painful thump on the cold, ungiving ground. Luckily we had no shortage of leaves. I once got it into my head to sleep in a leaf pile, inhaling the earthy aroma (when, besides autumn, does decay smell exciting?), burrowing like a mouse. I lasted a few hours, woke up shivering, and scurried back inside to my bed. Leaf piles are not as warm as they appear: another life lesson. Mostly lessons about leaves, but still.

Raking is contemplative work, performed in the brisk air and the yellow light, under the gaze of impending winter. In autumn the passage of time is palpable; there’s a sense of inescapable change that is ominous but also thrilling. Maybe a gust of wind comes along and destroys your neatly ordered heaps. By tomorrow, anyway, more leaves will have fallen, erasing all evidence of your labors. But that’s OK, because you’ve just been meditating on the impermanence of all human endeavor. You’re at peace.

If leaf raking calls to mind the sand mandala of Tibetan Buddhism, leaf blowing is like the aerial bombardment of an oppressed land: the same futility, brute force out of proportion to any reasonable aim, heavy collateral damage. This is personal for me. Now I live in a first floor apartment on Capitol Hill, and for the past few months the perceptible world outside my window has been dominated by three things: the town homes rising from the rubble across the street, the parade of dogs doing their business and an astonishing amount of leaf blowing. On this last point, I am going full-on NIMBY, and I’m not even sorry for it. The roar of the leaf blower is that maddening.

The real culprit here is the two-stroke gasoline engine, an anachronism that has been phased out for most uses apart from lawn care, where it has endured because of its light weight and raw power. There’s the noise, of course, an aggravating whine coupled with an intense blast of low-frequency sound that penetrates walls, drives people to distraction and contributes to a host of health problems. But the engine is even more remarkable for its pollution, for which the internet offers up a number of shocking comparisons. For example, according to Jason Kavanagh, the engineering editor at Edmunds.com, "The [non-methane] hydrocarbon emissions from a half-hour of yard work with the two-stroke leaf blower are about the same as a 3,900-mile drive from Texas to Alaska in a [6,200-pound 2011 Ford F-150 SVT] Raptor." Edmunds.com is an automotive industry website, so take that with a grain of salt, but still! The two-stroke engine spews much of its fuel into the air uncombusted, in volatile, possibly carcinogenic compounds to be inhaled by the hapless operator and passersby. The high-force gale also kicks up a cloud of fine particulates, including allergens and dried animal feces (remember all those dogs?). So much for the earthy aroma of autumn.

It’s not only we humans who feel the pain. Breathing particulates is bad news for pets (remember all those dogs?), and Germany’s Ministry for the Environment has declared leaf blowers a tool of last resort due to their role in the global “insect Armageddon.”

If you’ve ever watched a leaf blower at work and marveled at what appears to be a wholly pointless shuffling of debris, you might not be wrong. Alec Connon, now an organizer with the climate justice group 350 Seattle, once worked for a landscaping company. "We were all expected to look visibly busy at all times, so if there was nothing to do we just picked up a leaf blower and walked around,” he recalls. “I'd say half the time we used them, we were just kind of randomly moving dust around." Judging from my casual observations of leaf blower activity, half the time sounds about right.

My first choice would be to ban the things outright, all of them. Go back to whatever people did in that age of innocence before the leaf blower was invented. Return to the rake. Leave the leaves be. However, I’m a practical person and I’m willing to compromise. There may be some legitimate uses of blower technology. Newer gas-powered models are supposed to be quieter and less polluting, but this is no time to be messing around with fossil fuels. Luckily we don’t have to, because battery powered leaf blowers have been improving by leaps and bounds. Sure, they’re still more expensive and somewhat less convenient, since they need to be recharged, but there’s nothing to spur innovation like new demand from an industry deprived of lazier options (Editor's note: See below the article for more information added after this piece published). A transition to electric or battery-powered leaf blowers would solve the most egregious problems, though not the cloud of crap. With apologies to the allergy sufferers and the dogs, I’ll say I could live with this.

There is one strong argument against this plan. The economic impact of banning gas-powered blowers would be concentrated in the landscaping industry, with particular challenges for small, mostly immigrant-owned landscaping businesses. On the other hand, remember that the individuals at greatest risk for hearing loss and respiratory illness are the mostly immigrant and low-wage employees of those same small businesses — the people who are operating the machines. So this seems a poor excuse for inaction. A better approach would be some kind of buy-back or trade-in program to make the switch to electric less onerous. In fact, new Seattle City Councilmember Alex Pedersen proposed something of the kind in his campaign platform. I’m not sure I want the city paying homeowners for their gas-guzzling lawn equipment (get out the rake!), but a program to mitigate the impacts of a leaf blower ban on small businesses is something I could get behind.

Seattle would be far from the first city to ban leaf blowers. Many U.S. cities — hundreds by some counts — have outlawed or restricted their use. I will spare you the minute details of policy, the variations, the difficulties of enforcement, and go straight for the punch line. Seattle should follow in the recent footsteps of Washington, D.C., and ban gasoline-powered leaf blowers effective Jan. 1, 2022. Or hey, we could run ahead and start in 2021. The D.C. campaign took years and, fortunately for us, was exhaustively documented in The Atlantic by participant and correspondent James Fallows. Fallows and his comrades have done our work for us. Let’s jump right to their conclusion.

I predict the city council member who takes this idea and runs with it will be hailed as a hero of the people. No, I haven’t seen any polling, but you can do the math in your head. For every homeowner or property owner responsible for a migraine-inducing hour of leaf blower use, there must be at least a dozen neighbors within a block radius cursing that person under their breath. Those are good odds.

Of course, while we’re on the subject of noxious machines that spew greenhouse gases and health-destroying air and noise pollution, there’s no reason to stop at leaf blowers. There is also the matter of airplane traffic over Beacon Hill and, you know, cars. One step at a time, I say. If we can all join hands and ban gasoline-powered leaf blowers, there’s no telling what internal combustion engines we can take on next.


Editor's note: According to advocates, commercial-grade battery powered blowers, with long-lasting batteries and power adequate for professional use, can cost more up front than gas-powered models, given the high cost of batteries. However, electricity is cheaper and more efficient than gas, so some argue that it doesn't take very long before the extra cost is recouped. When it comes to less powerful blowers, sufficient for most home use, the battery powered ones are competitive in up front cost, too, according to Consumer Reports.