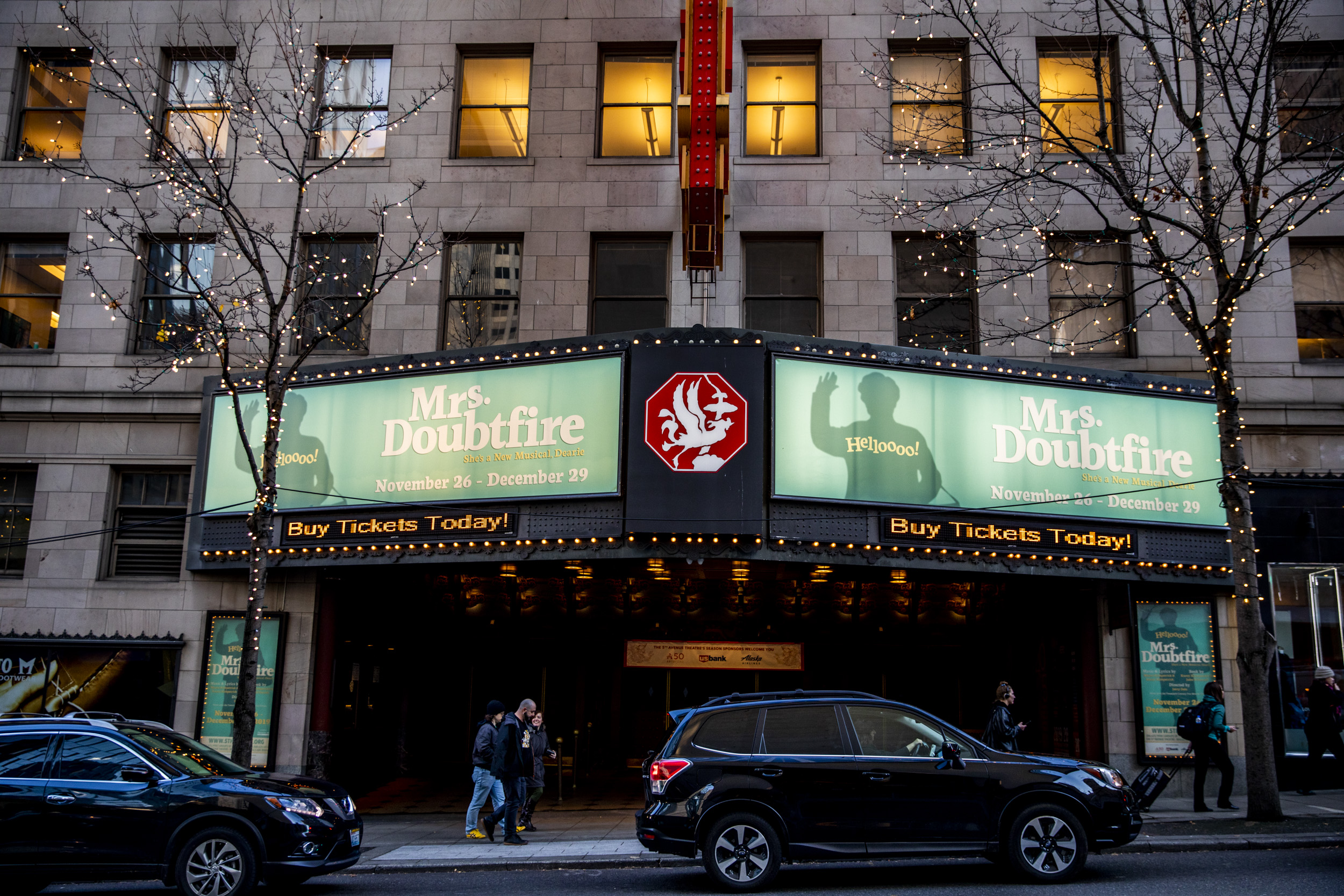 This week the 5th Avenue Theatre opens a big-deal musical that will make a beeline to Broadway.

The Seattle debut of Mrs. Doubtfire is when all the new play’s kinks must be worked out — dialogue rejiggering, song rearranging, staging tweaks — before it begins performances at Broadway’s Stephen Sondheim Theatre in March 2020. That means a lot of money, talent and ambition is riding on the five-week 5th Avenue run, and on the response by Seattle theatergoers to the latest expensive musical trying to replicate the box office magic of a megahit Hollywood film.

What are the odds of it succeeding? And how are longtime film and theater director Jerry Zaks and company retrofitting the 1993 Robin Williams film (about a divorced father who pretends to be a female Scottish nanny in order to spend more time his kids) for a social climate that has shifted its views on gender bending?

The 5th Avenue Theatre has become a leading developer and presenter of new musicals. Mrs. Doubtfire arrives with an A-list Broadway producer attached (Kevin McCollum, a force behind Rent and Avenue Q), plus a score by brothers Wayne and Karey Kirkpatrick and a book by Karey Kirkpatrick and John O’Farrell — the same music and story team that created (among other worthy credits) the clever faux-Shakespearean musical Something Rotten!

Zaks echoes other Broadway honchos when praising the 5th Avenue as “so welcoming, so professional. I don’t imagine there’s a better facility anywhere in the country to do the show we want to do.”

But just nine of the 5th Avenue newbies have made it to Broadway, four of which achieved considerable success (depending on how you gauge it). Three of those were adapted from films: the cunning, refreshing Hairspray (based on the John Waters movie), A Christmas Story: The Musical (a limited New York run, but many regional stagings) and the splashy, exuberant Aladdin (based on the Disney feature). The fourth, the Tony-winning Memphis, was an original work.

Hollywood and Broadway have been in cahoots for a long, long time. But modern musicals have come to rely more heavily on popular movies for mass-appeal material, including such current Broadway shows as Waitress, Mean Girls, Frozen, School of Rock and Moulin Rouge.

Yet for every screen-to-stage hit, there are numerous duds or disappointments — like the 5th Avenue-born Broadway exports Shrek, the Musical, The Wedding Singer and Saving Aimee (all of which proved short-lived).

That’s show biz, right? Ya lose some, ya win some. But Zaks, who directed the moderately successful Broadway version of Sister Act, says the odds are better with certain essentials in place.

“You need to use the movie’s story as the building blocks,” he says, “but presented in a way that gives it life and vitality on the stage. The basic challenges of storytelling are the same in movies and theater — how to get people involved, invested and interested in the characters.”

“The heart of this movie is absolutely intact in our show,” says Zaks. “Daniel, a brilliantly talented, impulsive, immature man, gets himself into trouble. His wife finally says, ‘I’m done,’ and the rest of the story involves what he has to do after they separate to stay in meaningful touch with his children. In the process he learns quite a bit about himself.”

Nodding to his own determination to stay close to his kids after a difficult divorce, Zaks says, “It’s hard not to care about a man who is doing everything he can to see his children. I think that’s something most people understand and relate to.”

But how much of that relatability in the movie depended on Williams, whose unique comedic brilliance was on full display as he zigzagged between playing desperate dad and twinkly, older nanny?

At the 5th Avenue, the bifurcated lead role is played by Rob McClure, a nimble actor-singer best known for his zesty cavorting in Broadway’s Honeymoon in Vegas (another short-lived movie spin-off). Can he overcome Williams’ Golden Globe-winning performance to win over audiences in his own right?

Zaks calls McClure “a brilliant actor,” and believes it’s an apples to tomatoes comparison. “In film you can cut out a lot of the stuff Robin did that didn’t work, and there was a ton of that on the cutting-room floor. But you can’t work that way on stage. You have to settle on the performance and repeat it every night, and make it seem like it’s happening spontaneously.”

Straight male stage characters have been cutting up in dresses and heels for centuries. But some in the LGBTQ community are no longer amused.

Seattle theater worker Eli Blodgett was so rankled by the notion of a Mrs. Doubtfire musical that they circulated an online petition expressing their disapproval of “the tired, transphobic tropes” in the film. The petition has garnered several hundred signatures.

“The central device of the plot, cross-dressing as an elaborate ruse, strengthens the assumptions and misjudgments that continue to harm trans women in implicit, pervasive ways,” Blodgett asserts.

Zaks doesn’t dismiss such qualms. In fact, he and his colleagues invited representatives from GLAAD, the national LGBTQ media advocacy organization, to watch a run-through of the musical and give feedback.

“They identified two or three little places that might be insensitive to the needs of the transgender or LGBTQ community,” he says. “We’ve tried to be aware of their concerns, and not try be funny at anyone’s expense.”

In one instance, Daniel-as-Doubtfire is out with his children when his daughter needs to visit the bathroom. Without thinking, he steers her toward the men’s restroom, then changes course when he remembers he’s impersonating a woman. “That was trying to get a laugh without acknowledging that the whole issue of gender-equal bathrooms is a really sensitive one,” Zaks says. “It was easier to cut that joke and let Daniel take her to the women’s room. The story is too special for us to inadvertently offend anyone just for a laugh.”

Questions remain. Will a cross-dressing comedy that tries not to offend still be funny? And will fans of the movie be able to banish the celluloid prototype from their minds and accept a 21st century song-and-dance version?

“Until you get it up onstage, until you can monitor what’s happening on stage and what’s happening to the audience, it’s all theoretical,” says Zaks, who expects the show will undergo a lot of edits in Seattle. “The bottom line is having people come see our Mrs. Doubtfire, and while they are watching, forget about the movie.”