Gossett, the civil rights icon who has been a mainstay on the council for 25 years, was trailing by 14 points on Tuesday night. Fellow Councilmember Jeanne Kohl-Welles was winning decisively. 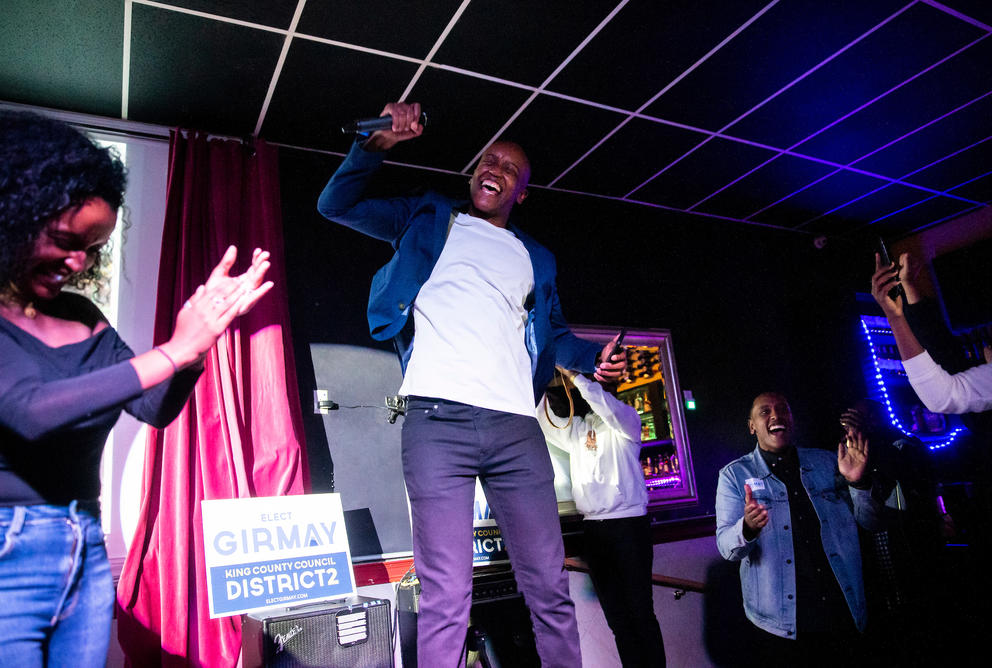 Metropolitan King County Council District 2 candidate Girmay Zahilay jumps up and down after reading election results in his favor at his election night party at Rumba Notes on Tuesday, Nov. 5, 2019. Zahilay is leading over incumbent Larry Gossett, a 25-year veteran of the council. (Lindsey Wasson for Crosscut)

After a quarter century, Larry Gossett’s time on the King County Council appears to be coming to an end.

The 74-year-old politician, who got his start as a civil rights activist in the late 1960s, was losing his reelection bid by a wide margin Tuesday night, trailing challenger Girmay Zahilay by about 14 percentage points.

The gap was wide enough that it looked unlikely that Gossett could close it in the coming days, even as many ballots remained to be counted in the vote-by-mail election.

In the first batch of returns Tuesday, Zahilay was far ahead, with about 57% of the vote, compared with Gossett’s 43%. The two men are competing to represent the county council’s District 2, an area that includes Seattle’s Central District, Capitol Hill, Beacon Hill, the Rainier Valley, Seward Park, Skyway, the University of Washington and Laurelhurst.

Zahilay is a 32-year-old lawyer who co-founded a nonprofit to mentor young people from disadvantaged backgrounds. The son of Ethiopian refugees, he was born in Sudan and moved to Seattle with his family when he was 3, later graduating from Gossett’s alma mater, Franklin High School.

In the August primary, the first-time candidate stunned some political observers — and even a few of his supporters — when he bested Gossett by a whopping 19 percentage points.

Tuesday night saw Zahilay leading by a similarly large margin, but Gossett wasn’t quite ready to concede the race. Speaking after the first results dropped, he said he’d “wait to see how the trend goes.”

Zahilay, meanwhile, was celebrating at his election night party at Rumba Notes Lounge in Columbia City. He said he was “excited to get to work” on key issues facing King County, such as building more affordable housing and fighting climate change.

Throughout the campaign, Zahilay has shied away from directly criticizing Gossett, whose civil rights work he says he greatly respects.

Gossett was a founding member of Seattle’s chapter of the Black Panther Party, as well as a co-founder of the Black Student Union at the University of Washington. In 1968, Gossett was arrested and jailed for helping stage a sit-in at Franklin High School, a demonstration he said was necessary to fight for fair treatment of Black students.

The council member is the last living member of the Gang of Four, a group of four Seattle civil-rights activists also known as the Four Amigos. Together with Bob Santos, Roberto Maestas and Bernie Whitebear, Gossett fought to empower Seattle’s communities of color, in part by building a multicultural coalition that proved hard for white people in power to ignore. The Four Amigos’ philosophy, Gossett recently recalled, was that different minority communities could achieve more by banding together than fighting separate battles on their own.

This year, in what Gossett has characterized as his final reelection bid, the longtime politician has faltered on the campaign trail. In an interview last month, Gossett said it took the jolt of his being trounced in the primary for him to embrace social media and start doing more door-to-door canvassing.

Speaking before the results came out Tuesday night, Gossett said that the changing demographics and “significant gentrification that has occurred in my service area” have impacted him more than he’d thought.

At his election party Tuesday night, Gossett thanked his supporters and vowed to continue his service in the county regardless of the final results. "If I don't win," he told his supporters, "I'm going to be involved in some kind of social change activities." He said he was proud to have served the community as a county council member for "25 long years."

In another contested King County Council race, incumbent Councilmember Jeanne Kohl-Welles was defeating challenger Abigail Doerr in the race for District 4, which covers a swath of Northwest Seattle that includes Magnolia, Queen Anne and Ballard.

Kohl-Welles, a former state legislator who was elected to the county council in 2015, has emphasized her experience in politics, saying she is able to work collaboratively to get things done. Kohl-Welles, 77, served two years in the state House starting in 1992, then in 1994 moved to the state Senate, where she served more than two decades.

Recently, Kohl-Welles made headlines when she and another King County Council member called for the cancellation of a Seattle event featuring Al Franken, the comedian-turned-U.S. senator who resigned amid accusations he kissed and touched women inappropriately. Kohl-Welles’ demand came shortly after a new allegation emerged that Franken had groped a woman who worked for U.S. Sen. Patty Murray at a 2006 event in Seattle.

Ultimately, last month’s Al Franken event in Seattle wasn’t canceled, but ticketholders were offered refunds if they no longer wished to attend.

Doerr is a transit advocate who ran the successful 2016 campaign for Sound Transit 3, a $54 billion ballot measure that promises to extend light rail and expand bus service throughout the Puget Sound region. She previously worked as an aide to Seattle City Councilmember Sally Bagshaw, and also ran last year’s unsuccessful campaign for a statewide carbon tax.

While campaigning, Doerr, who is 30, has talked about the need for new leadership as the region continues to grow and change.

On Tuesday, however, voters seemed to be content with the more experienced candidate. Kohl-Welles was winning handily with about 73% of the vote in early returns, compared with Doerr’s 26%.

Kohl-Welles said she was surprised by her margin of victory Tuesday night, but thinks that speaks to how active she has been in the community in recent years.

"I believe that I have been around, and people know me and they trust me, and I think have respect for me," Kohl-Welles said. "Public service is my calling, and I think that showed."

Doerr said she planned to call Kohl-Welles in the morning and congratulate her on winning the race. She said she was glad to have waged a campaign that pushed the incumbent to discuss important topics such as expanding transit, combating homelessness, building affordable housing and reducing greenhouse gas emissions.

"I’m not done making sure we act with urgency on these issues," said Doerr, who added that she plans to continue working in campaigns and politics in the future.

Two other King County Council incumbents were easily winning their reelection bids Tuesday. Claudia Balducci was ahead with 77% of the vote, with challenger Bill Hirt earning only 23%. Similarly, incumbent Councilmember Joe McDermott was far ahead of challenger Michael Robert Neher, with McDermott winning 82% of votes that had been counted as of election day.

King County Director of Elections Julie Wise also was winning her race against challenger Mark Greene Tuesday night. As of the first ballot count, Wise had almost 79% of the vote, with only 21% going to Greene.

by / November 5 /
Article continues below