Oregon and California enacted rent control. Could Washington state be next?

In Olympia, the appetite for lifting statewide restrictions on rent control has been minimal in the past. But some think that could be changing. 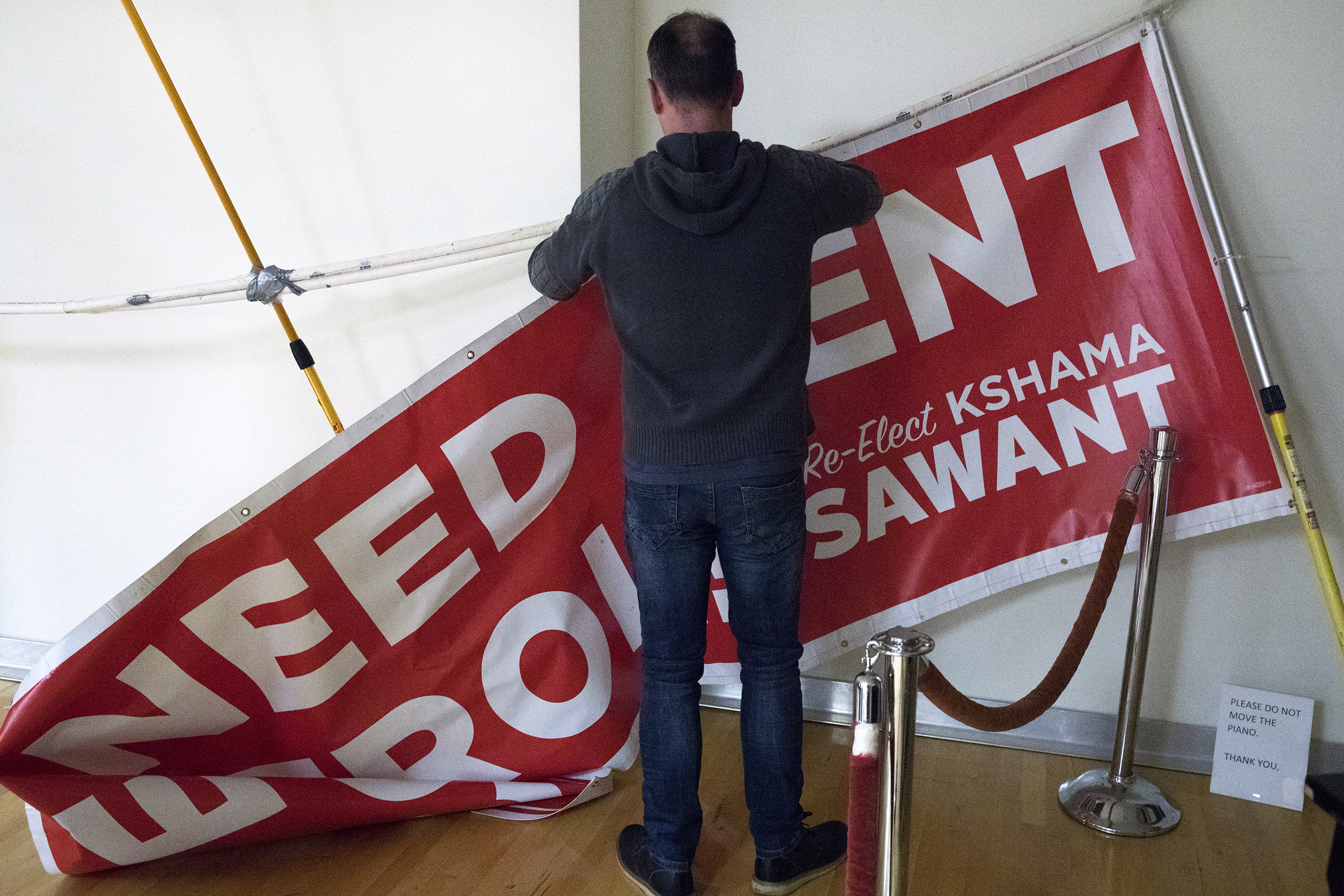 The red stickers and signs posted around town leading up to this month’s Seattle City Council elections bore a simple message. “We need rent control” and “Seattle needs rent control” were some of the main campaign slogans of Seattle City Councilmember Kshama Sawant, who recently won reelection despite record spending by business interests trying to unseat her and other progressive council members.

Yet the reality remains that Washington state law doesn’t allow cities to impose their own rent control measures — and that's something that will take much more than the election of a single city council member to change.

Sawant, the only socialist on the Seattle City Council, is well aware of the statewide restriction, which has been in place for nearly 30 years. She has proposed enacting a rent-control policy throughout Seattle that would limit annual rent increases to the rate of inflation, but that would take effect only if the Legislature lifts the ban on local rent-control measures.

Though she did not respond to multiple requests for an interview this week, Sawant wrote in an emailed statement Wednesday that “our reelection victory shows the mandate for rent control.”

It’s not clear that outcome is on the horizon, however, as some lawmakers say there’s little appetite to address the issue in Olympia in the near future.

Still, at least one Seattle legislator hopes that new rent-control measures adopted this year in Oregon and California will help advance the conversation at Washington’s state Capitol.

“I’ve actually been a little surprised at how quickly momentum has built around the country on this issue,” said state Rep. Nicole Macri, D-Seattle, who sponsored unsuccessful legislation in 2018 that would have repealed the state’s ban on local rent-control ordinances.

In addition to California and Oregon, New York, too, recently enacted a policy to allow rent control in cities throughout the state, part of a suite of tenant-protection measures the state adopted this year.

Macri said she plans to introduce legislation in Olympia next year that may borrow some pieces of Oregon and California’s rent-control policies. While she is still working on details, she said she would like to limit how much landlords can raise rent prices from year to year, as well as give localities the authority to adopt their own regulations.

Oregon’s measure, which Gov. Kate Brown signed into law in February, generally prohibits rent increases during a tenant’s first year. It also would limit annual rent increases after that to no more than 7% plus inflation, and would prevent landlords from exceeding that yearly cap even if they evict one tenant and sign a new lease with another.

Similarly, the California bill would cap annual rent increases at 5% plus a cost-of-living adjustment, or 10% — whichever is lower.

The city of Federal Way just enacted its own “good cause” evictions policy through an initiative local voters approved this month.

Sen. Patty Kuderer, D-Bellevue, said she thinks Washington’s Legislature will focus more on those types of renter protections during the upcoming 2020 session than capping rent increases or clearing the path for local rent-control measures.

Kuderer, who chairs the Senate Housing Stability and Affordability Committee, said she would rather “wait and see” how Oregon, New York and California’s new rent-control laws affect housing affordability in those states before adopting a similar plan in Washington.

“We are going to see how this plays out in those areas,” said Kuderer, adding she first wants to make sure those policies achieve the “desired results” of keeping rents in check and maintaining housing inventory.

The chair of the housing-focused committee in the state House, Rep. Cindy Ryu, wrote in a text message that she hasn’t heard much new support for changing the state law to allow local rent-control ordinances, though she thinks a statewide cap on rent increases might be more feasible.

She questioned, however, whether there would be enough time in the 2020 session to adopt such a policy. Legislators are set to reconvene in January, but for only 60 days.

“Lots of negotiations will be needed and 60 days may not be long enough,” Ryu, D-Shoreline, wrote via text.

That’s partly because many lawmakers, including some Democrats, don’t think rent control is the right policy to pursue in combating the region's skyrocketing housing costs, said Sen. Reuven Carlyle, D-Seattle,

Carlyle said the politicians and advocates promoting rent control are staking out “an outlier position.”

“An overwhelming majority of economists believe it is not an effective way of increasing housing quantity or quality,” Carlyle said this month, adding, “That doesn’t mean the frustrations about housing aren’t justified.”

“My constituents are very focused on getting the homeless into housing and building more units faster for affordable housing, and for workforce housing,” Tarleton said.

State Rep. Laurie Jinkins, who was recently selected by House Democrats to be the next speaker of the House, said she, too, is still looking at research to determine whether rent control policies are truly effective elsewhere. “It’s not clear to me,” said Jinkins, a Democrat from Tacoma.

What's already clear is that any rent-control measures will face stiff opposition from Republicans, who are in the minority in both chambers of Washington’s Legislature.

“I think it’s missing the point of actually solving the problem,” said state Sen. Hans Zeiger of Puyallup, the ranking Republican on the Senate housing committee. Zeiger said the Legislature needs to focus first and foremost on expanding the state’s supply of housing.

Macri agreed that more housing stock is needed, but said rent control is an important tool to pursue simultaneously to prevent people from being displaced.

Regardless, the rent-control measures that have the best chance of passing the Legislature are unlikely to match Sawant’s vision, which involves capping annual rent increases at all properties, regardless of the type of building or when they were constructed.

By contrast, the measures recently adopted in Oregon and California exempt residential buildings constructed in the past 15 years. The California measure also makes exceptions for certain properties owned by individuals rather than corporations, according to a policy analysis produced by staff at Washington’s Legislature.

Sawant has characterized those types of exemptions as “corporate loopholes” that will render any rent-control policy far less effective.

In her emailed statement to Crosscut, Sawant urged lawmakers to take more initiative to lift the statewide ban, which she said will require them to buck the powerful real estate lobby in Olympia.

“They are not children,” Sawant wrote of state lawmakers. “...They should not need me to tell them about the deep affordability crisis and the suffering of their constituents, and the need to lift the rent control ban.”