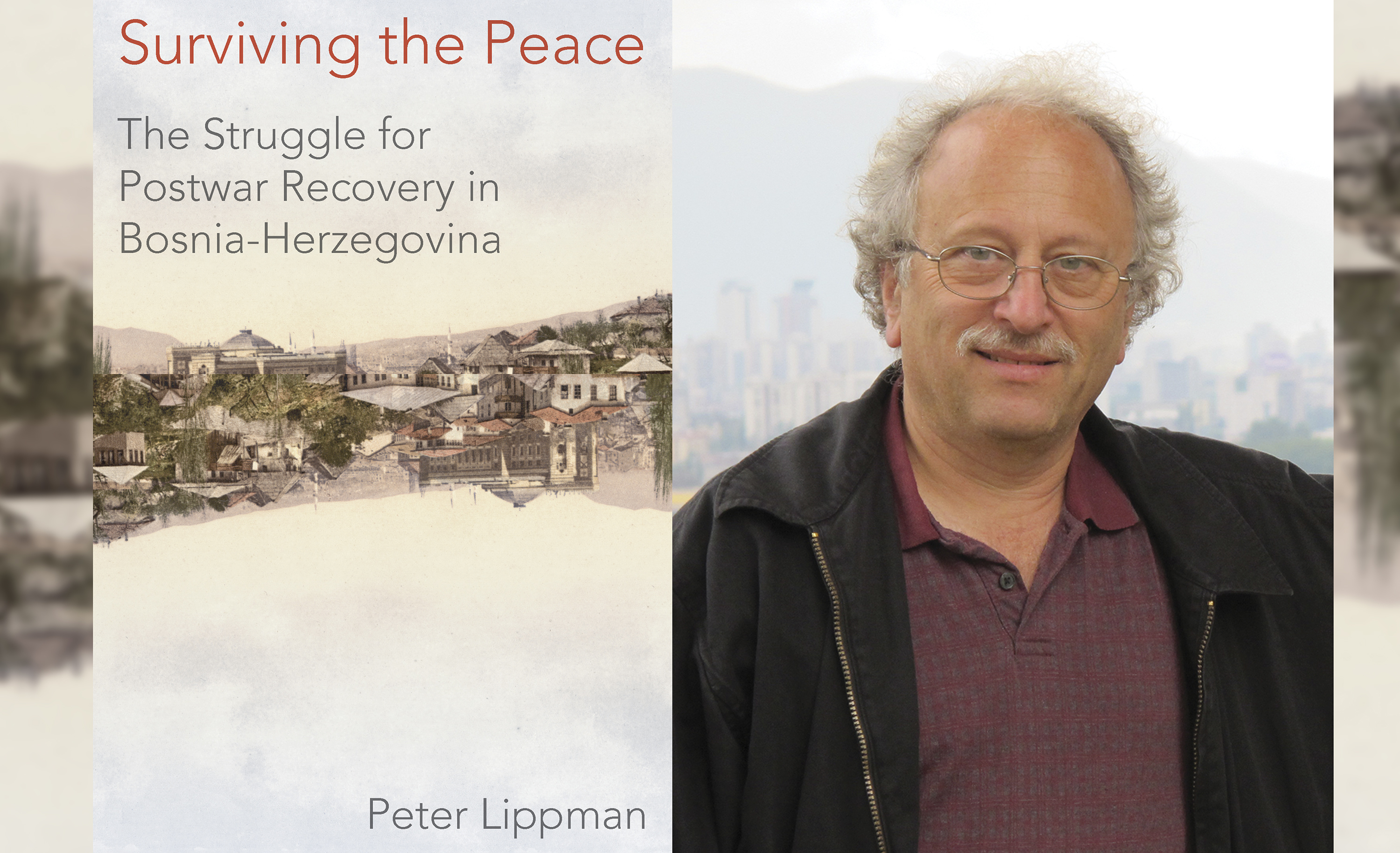 Seattle carpenter Peter Lippman enjoys the satisfaction of building things with his own hands: cabinets, decks, an octagonal garden house, the housing for a ceiling art installation at Congregation Beth Shalom in the Bryant neighborhood. He’s currently finishing a chicken dacha place in Lake City, the design of which was inspired by the Slavic legend of Baba Yaga, a supernatural being who lives in a forest hut that stands on chicken feet. (Yes, the hut-shaped eatery will rest on such feet.)

He also built the second floor at Left Bank Books in Pike Place Market, a beacon for readers (and curious tourists) in search of radical politics.

Now his own book is hitting the shelves. In Surviving the Peace: The Struggle for Postwar Recovery in Bosnia-Herzegovina, Lippman, 67, chronicles the many chapters of Bosnia’s dystopian struggles, documenting street-level tragedies, as well as the consequences of bloodlust nationalism that led to Serbian ethnic cleansing of Bosnian Muslims (also known as Bosniaks).

“On one occasion,” he writes, “[Slavenka, a Sarajevo artist] was attending a funeral when snipers began firing on the cemetery. She had to jump into an empty grave for shelter. She was stuck there while the snipers kept shooting, as if they were playing with her.”

Though he’s written extensively on the topic for multiple outlets — Christian Science Monitor, Balkan Witness, The Seattle Times and Seattle Post-Intelligencer — this is Lippman’s first book. His riveting stories reflect first-hand experience of the region over the past 40 years.

In his early 20s, Lippman studied carpentry at Seattle Community College. His interest in ethnology and music first led him to Bosnia in 1981, and he kept going back.

“During the ’80s, I saw things falling apart there,” he says.

Bosnia-Herzegovina descended into a catastrophic, three-year war beginning in 1992 and has never been the same. An estimated 100,000 people died during the conflict, among them 20,000 children. Millions more were displaced. Tens of thousands of Bosnian Muslim women were raped.

Over several decades, Lippman returned to Bosnia as a student, a journalist, grassroots activist, aid worker and human rights observer.

“In 1992, I formed a grassroots organization in Seattle to sponsor a family of Bosniak refugees. The father had been in a concentration camp,” Lippman says. “I grew close to them. I decided I wanted to go live in Bosnia.” While there, he worked with a relief organization and did some translating for media.

One of four brothers from “a Jewish-liberal, Kennedy-liberal” Seattle family, Lippman grew up with parents who mobilized with others to stop redlining and actively supported the United Farm Workers. The Vietnam War galvanized the entire family, with the draft looming over Lippman and his older brothers, Roger and David. (Lippman also has a younger brother, George.)

Roger, a leader in the anti-war, draft-resisting Seattle chapters of Students for a Democratic Society and Seattle Liberation Front, holds a place in city lore as one of the Seattle Seven, tried for “conspiracy to incite a riot” in 1970. The defendants were sentenced to three months in jail.

Peter Lippman has spent a few days in jail, too. In 1998, he was arrested by Serb forces in Pristina, Kosovo, a partially recognized state that Serbia overran in the ’90s. He had been asked to keep watch over Serbian assaults on Albanian student demonstrators. The incident gave him credibility with the American press.

Nationalism exists from the demagogue on down to your bigoted neighbor with a grievance. Fear of the ‘other,’ promotion of victimhood among a chosen group of people, is standard all over the world because it works.”
— Peter Lippman

In the book, Lippman focuses largely on the aftermath of the war. He captures, in vivid detail, extreme hardship and deprivation; profiteering and corruption by entrenched government elites; hopelessness that democracy will never come; and complicated efforts by citizen activists to help returning refugees resettle.

“I wanted to write a close-up view of what was not being covered by other sources,” Lippman says. “The efforts of ordinary people to own their rights, try to create a healthier society and organize in the face of discrimination, displacement and corruption. I kept going over there and talking to people who were open with me.”

Lippman sets the stage for his narrative with a succinct history of events leading to the war. The 1980 death of Josip Broz Tito, Yugoslav marshal and leader, kicked up old ethnic divisions and hostility in Bosnia, one of the Republic of Yugoslavia’s members. Separatist Bosnian Serbs and Croats, encouraged by neighboring Serbia and Croatia, ended the country’s longstanding unity, and were set on hatred and division. Serbs were largely responsible for the shocking, prolonged genocide perpetrated against Bosniaks.

The international community did little to help, until NATO began bombing the Bosnian Serb army in 1995. The Dayton Accords, a peace treaty initiated in Dayton, Ohio, followed, partitioning Bosnia into the Serb-dominant Republika Srpska and the Croat-Bosniak Federation of Bosnia-Herzegovina.

“The central question after those first six or seven years following the war was the return of internally displaced persons to their prewar homes,” Lippman says.

Some of the most striking passages in Surviving the Peace are personal, granular descriptions of post-Dayton survival, including the loss of prewar security and economic standing among ordinary people.

“In late 1997,” Lippman writes, “I visited a family in an outer neighborhood of Sarajevo. No one in the family, headed by a demobilized veteran named Refik, was working. They had small pensions; there was not much help for veterans. Refik said [those] who had nice cars in Sarajevo were people who left during the war and earned money elsewhere. The ostentatious display of privilege in Sarajevo offended him, a displaced person who had fought bravely during the war and had lost his home.”

“People are trying to live their lives there,” Lippman explains. “But stagnancy in the economy induces people to emigrate. That and the corruption and lousy politics. People are sick of it and don’t know how to change it.”

In addition to being a carpenter and now, a published author, Lippman speaks five languages and plays several instruments, including the trumpet and tamburica. He performs with a klezmer band he founded, Malke and the Boychiks, and plays Balkan music with Kafana Republik.

Asked about the current rise of nationalistic trends in America and Western Europe, he notes how the collective identity of Yugoslavia was quickly destroyed once the breakdown began.

“Nationalism exists from the demagogue on down to your bigoted neighbor with a grievance. Fear of the ‘other,’ promotion of victimhood among a chosen group of people, is standard all over the world because it works,” he says. “Self-defeating cynicism is customary in Eastern Europe, where people live at the whim of demagogues, strongmen and empires. But it’s also quite common here,” Lippman says. So how do we prevent the breakdown of our own nation? “People have to do more as citizens than vote.”