'Soul' of Seattle up for grabs in city council races. Whose vision will win?

Change is coming to City Hall — and, soon, voters will tell us what kind. 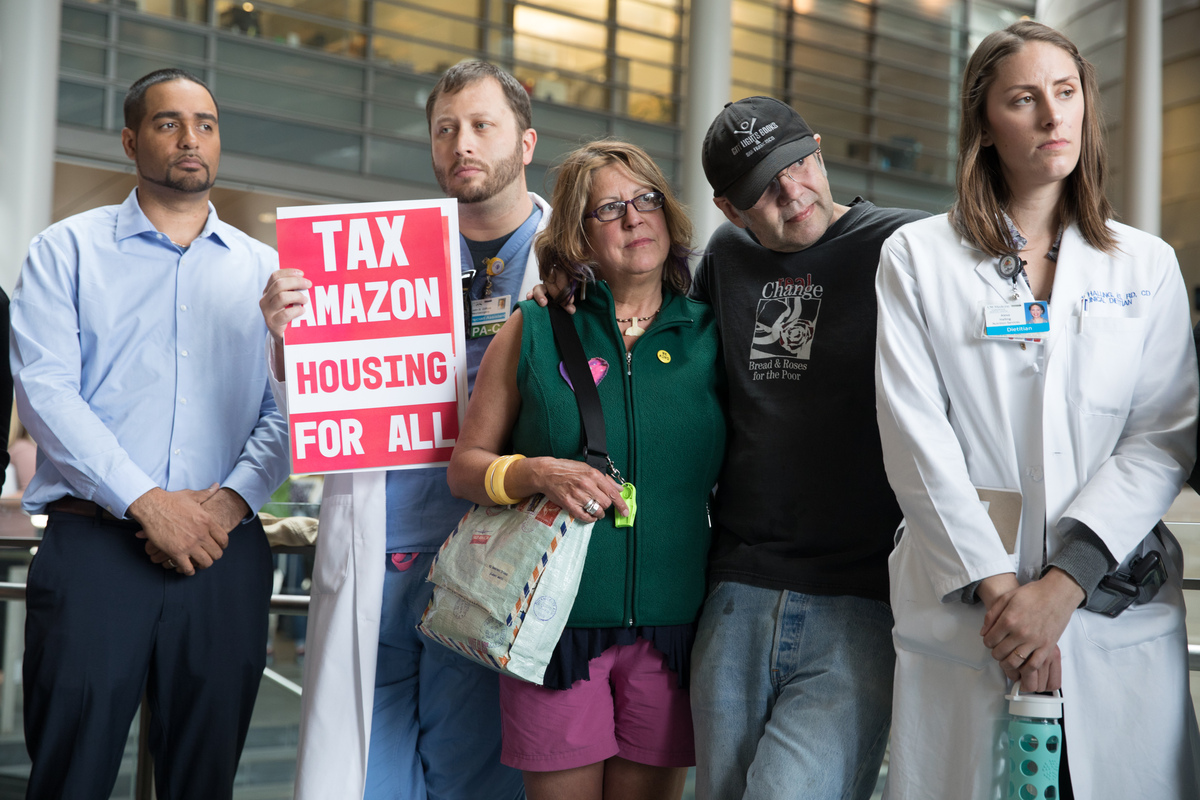 Change is coming to the Seattle City Council, regardless of the results from tonight’s election. With four incumbents — 44% of the council — already on their way out, the question is not if there will be change, but what kind.

The turnover mirrors a broader upheaval in Seattle — a city that has seen its budget, as well as its homeless population, number of residents, housing prices, job figures and displacement, all explode.

With so much political churn guaranteed in advance, the results of the fight to fill those seats — and to shape the city’s future — will serve as the purest test of how residents think Seattle should reconcile those contradictions. It has been a debate over issues — namely homelessness and growth — but this election has also become something bigger than that. Some candidates have cast it as no less than the battle for the “soul” of Seattle.

“People don’t like the way Seattle has changed,” said Crystal Fincher, a political consultant who has supported more left-leaning candidates. “That can be true for a lot of people for a lot of different reasons.”

The question is, “Who bears the responsibility for cleaning up the mess, really?” she added.

“It is a fundamental question about how the city should do business,” political consultant Ben Anderstone said of the election. “Whether the city’s priorities should be stripped down, taking care of fundamental services, keeping an eagle eye on the budget or whether it should take a more expansive view of government.”

It’s likely the dust kicked up in the campaigns will not settle completely for several days or even weeks after election day. Washington’s vote-by-mail system means thousands of ballots go uncounted on election night and that the initial results often differ from what’s certified several weeks later.

But while all our questions are unlikely to be answered after the first results are released a little after 8 p.m. today, here are a few things we’ll be watching.

Business advocacy groups have for years been cultivating a narrative that the current city council is not serious about effecting change. The most obvious culmination of this was the now notorious “head tax” — a per-employee tax on high-grossing businesses that was passed in the spring of 2018, then quickly repealed. For its detractors, the whole period was proof that the council shoots from the hip without thinking. Amid slow progress on visible homelessness, it’s a message that some believe will spur change.

“There’s been growing skepticism among voters for a while,” said Markham McIntyre, executive director of Civic Alliance for a Sound Economy (CASE), a political action committee that has spent $2.4 million to push the council in a direction more friendly to business and Amazon. “I think the head tax is the thing that exposed that the city council doesn’t have a plan.”

Former Mayor and Councilmember Tim Burgess, whose People for Seattle political action committee has spent $640,000 in pursuit of overhauling the council, points further back, to when Councilmember Mike O’Brien proposed deprioritizing encampment enforcement in certain areas of the city. “It’s less about specific issues and more about governance, style of governance, accountability, responsiveness, those big concerns,” he said.

Throughout the campaign cycle, there has been a markedly consistent message from these anti-council PACs.

“This election is about change versus the status quo,” said McIntyre.

And both Burgess’ and McIntyre’s groups have calculated their best path to drive home that message is via Councilmember Kshama Sawant, who has come to epitomize council dysfunction in the eyes of her opponents. People for Seattle has been running ads with Sawant’s likeness even in districts where she’s not running.

Montlake resident Barbara Wright supports much of what Councilmember Sawant stands for, but had never voted for her before. “I’m not all that crazy about her style sometimes,” said Wright, 73, a onetime employee of Public Health — Seattle & King County. And until a few weeks ago, she saw no reason to change course, leaning toward supporting Sawant’s challenger, Egan Orion.

But then Amazon wrote a $1 million check with the intention of swaying the election toward the political center, and Wright started getting cold feet.

“I hadn’t been supportive of [Sawant] and then I started getting this barrage of a couple kind of nasty flyers about the race,” she said, “then I started reading about the PAC money that’s coming into the race…. It’s just a little too much for me, pressure coming from the PAC money, and I’m changing my vote because of that. It’s really scaring me.”

It’s the Barbara Wrights of the world that may give the more left-leaning candidates hope tonight. As people like Burgess have complained of approach and style, urging more focus on potholes, the city’s left flank has sought to keep the lens on systemic issues. The influx of money into the campaigns plays into that.

The test, said Fincher, is on the definition of “progressive.” “Is that a noun or a verb?” she said. “Is that something that we just call ourselves?”

Last week, U.S. Rep. Pramila Jayapal, in a phone call with reporters, joined local and national critics of the large-scale spending — including presidential candidates Elizabeth Warren and Bernie Sanders — calling Amazon’s contributions “callously disrespectful to the residents of our city.” Councilmembers Lorena González and Teresa Mosqueda endorsed candidates Shaun Scott and Kshama Sawant after Amazon’s large drop, papering over past disagreements in favor of rebuking what they view as a systemic inequity.

“I think [Amazon’s donation] is certainly a good news story for folks on the left block because it lends credibility to the fact that voting for the left flank is the progressive choice in the race,” said Anderstone.

That’s the case for Wright, who’s suddenly willing to overlook her misgivings about Sawant’s style. “A lot of the problems we have in the city have really been caused by big business,” she said. “I don’t think they’ve paid their fair share and caused a lot of problems and then business turns around to say the council is ineffective.”

But both political consultants, Fincher and Anderstone, are skeptical that any backlash to the spending will be more powerful than the spending itself.

“Money matters,” Fincher said. “It does. Money is communication. It buys you the ability to talk to more people and talk louder.”

“I think that [the money] hasn’t changed the message, because in all of our research voters say that they want change,” said McIntyre.

The contest, then, is which message is more powerful: Upend the status quo or resist corporate influence?

Mayor Jenny Durkan — who’s not up for reelection until 2021 — has stayed relatively quiet during the course of the council campaigns, except only to endorse Mark Solomon in District 2.

But a lot could be at stake for the mayor, who, if she seeks a second term, will need to defend her own record on the campaign trail, especially on homelessness. Her ability to do so may hinge on her relationship with the future council.

“Durkan has been able, to some degree, to rise above the din,” said Anderstone. “She’s been polling higher than city council fairly routinely. She’s outrunning people’s answers on how they feel about city government. But that’s also a precarious position to be in. A sweep in of center lane candidates will in some ways be a boon to her … but somewhat paradoxically a sweep in by center lane candidates is an admonishment of how city government is running.”

The future of money in Seattle politics

Labor and more progressive groups also spent heavily this election, but were outgunned by the pro-business committees.

Neither Burgess nor McIntyre of CASE admitted any regret for how much their groups have spent on this election.

“We’re engaging in a way that is appropriate and allows us to communicate our message,” said Burgess. “Would it be better if it was a different way and a different means of financing campaigns? Yes. But it is what it is.”

Councilmember González is proposing a long shot law to restrict the role of PAC money in local elections. “The reality is that Seattle’s democracy and the country’s democracy is under direct attack by these enormous unfettered limitless dollars,” González told reporters last week.

McIntyre said he was theoretically supportive, but only if it also restricted spending by unions and other committees — which it would not. “It’s alarming to me that Councilmember González would pick and choose who gets to speak politically,” he said.

Will there be a mandate?

If the business-backed candidates or the more left-leaning bloc sweeps Tuesday night, we may hear talk of a mandate.

However, in the perhaps more likely scenario that some combination is elected, the path forward for City Hall will likely remain unclear. And the months of existential angst at the core of city politics could continue.

“If it’s a more mixed decision,” said Anderstone, “I expect people are going to double down on their viewpoints that they brought in to this cycle.”