To stop diseases like West Nile, WSU scientists are feeding blood to mosquitoes

Mosquito-borne diseases like Zika and West Nile lack vaccines. But Washington scientists think insulin could weaken these diseases in mosquitoes before they reach people. 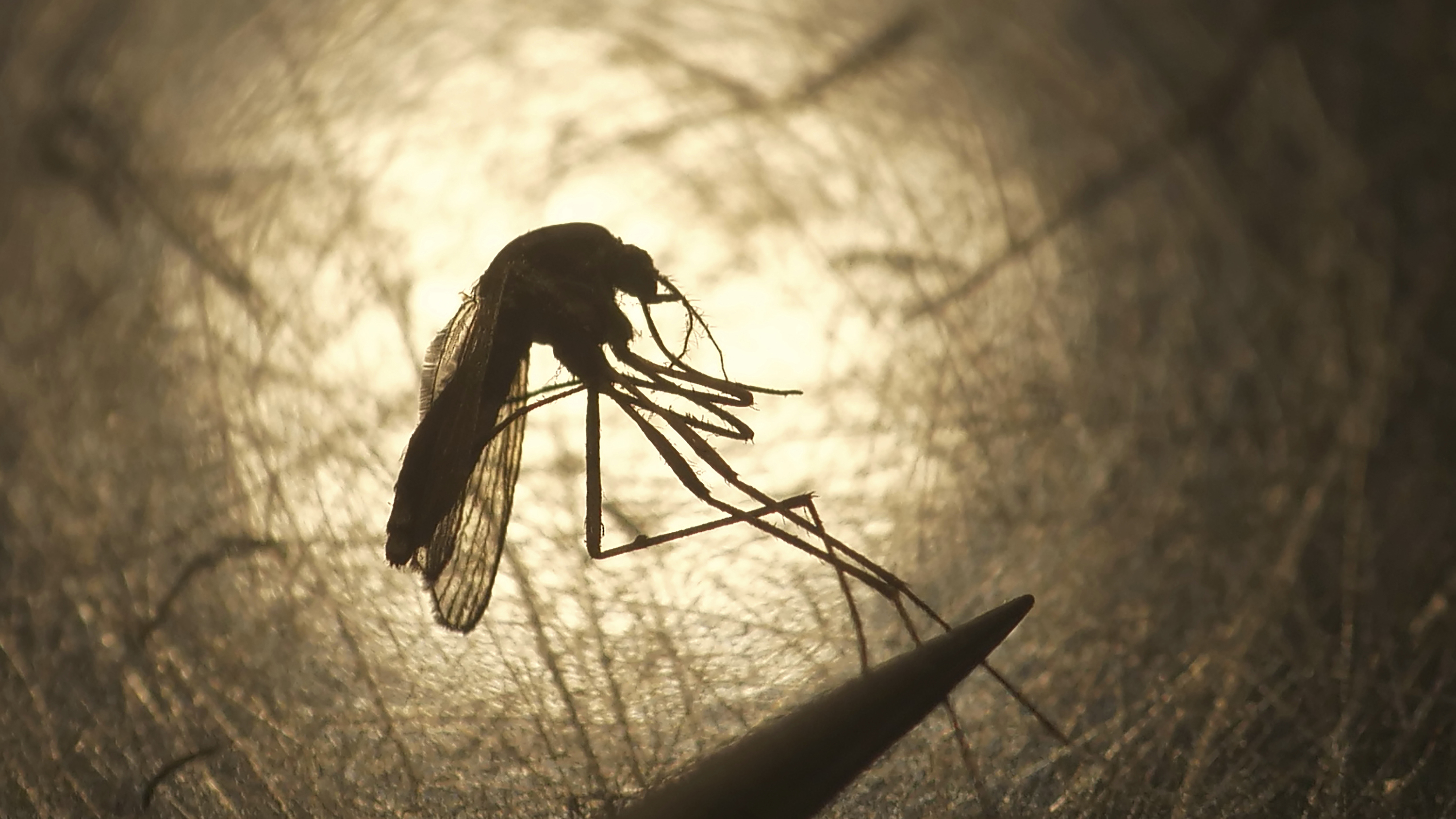 In this Aug. 26, 2019, file photo, Salt Lake City Mosquito Abatement District biologist Nadja Reissen examines a mosquito. The potentially fatal West Nile virus is popping up more around the Southwest following a rainier winter. There are a record number of cases in Maricopa County in Arizona and nine deaths in the entire state so far this year. (Rick Bowmer/AP)

By now, everyone knows mosquitoes are more than annoying — they’re killers, and they’re slowly spreading viruses throughout Washington state. Since first appearing in 2006, the West Nile virus has been detected in more than half of Washington counties.

The impacts are even worse elsewhere: Global and national infection rates for mosquito-borne viruses like West Nile, dengue and Zika have skyrocketed over the past few decades, and those numbers will increase as global warming extends the insects’ geographic range. Stopping the spread of these viruses is difficult partly because they reproduce so swiftly that a single bite can transfer more viruses than a human immune system can keep up with — and they mutate so quickly that vaccines are rendered ineffective.

But many researchers believe suppressing viruses in their mosquito hosts before they get to humans could better stop the spread. Dr. Alan Goodman, an assistant professor of molecular biosciences at Washington State University, and his colleagues have struck possible suppression gold by working with one particular common human substance: insulin.

Have thoughts on this story?

Join our Science & Environment Field Notes group on Facebook to chat with us about it.

In a new study published in the journal Cell Reports, Goodman and company discovered that feeding mosquitoes insulin reduces their viral load — the actual amount of virus transmitted by mosquitoes per bite.

“If we can reduce the amount of virus in the vector animal, then the chances are when that vector animal bites someone, it would transmit less virus,” Goodman says. “Then [people would] have a better chance of fighting off the virus, so that [they] don't get long-term disease.”

In the long term, this research could be put toward projects that help mosquitoes battle infection themselves. Battling dengue, Zika or West Nile (collectively known as flaviviruses) might come in the form of insulin-spiked bait traps or genetic-editing techniques that make mosquitoes more resilient.

“This study … provides important insight into how we might be able to control virus infection in mosquitoes and thus help prevent the transmission of these viruses,” says Dr. Jennifer Hyde, an assistant professor of microbiology at the University of Washington, who was not affiliated with the research.

West Nile spread to all 48 continental states between its discovery in New York in 1999, with Washington the last state to succumb. The disease, which originated in birds, has since appeared in the majority of Washington counties; Seattle saw its first human case last year.

Hanna Oltean, an epidemiologist with the Washington state Department of Health, says West Nile cases have been reported in most years since 2006, and an increasing number of Washington residents have returned from elsewhere with diseases like Zika. Whether that trend will continue, she says, is still in question.

“Mosquito-borne flavivirus disease epidemiology is complex, and … due to this complexity, it is difficult to predict whether and how flavivirus activity will change,” Oltean says.

As of 2018, more than 50,000 people have been infected throughout the country, according to the Centers for Disease Control and Prevention, with nearly half developing the brain inflammation that marks the most serious cases. Five percent of those infected have died.Science established a relationship between insulin and general viral suppression in mosquitoes about a decade ago, says Goodman, but how and why it boosts immunity in mosquitoes has been a mystery.

In their study, Goodman and seven colleagues from three other universities show that feeding mosquitoes insulin at the time of infection boosts their immunity enough to reduce the overall amount of virus in their bodies. This is true for both the Culex mosquitoes responsible for West Nile and the Aedes mosquitoes responsible for dengue and Zika. More than that, the researchers identified the immune response pathway activated by insulin exposure in West Nile-infected mosquitoes to show exactly how this suppression process happens.

The experiments started in fall 2016, after lead author Dr. Laura Ahlers was still working in Goodman’s fruit-fly-focused lab. She’d come across a West Nile viral strain in the lab’s freezer stocks while brainstorming an independent study.

“I thought, well, West Nile virus is really important, this hits very close to home, and I would like to use this and really dig into a virus that really matters in my own community,” says Ahlers, now a postdoctoral research fellow at the National Institutes of Health.

“Some died faster and some died slower and so the idea was to figure out… which genes are likely to cause that survival decrease?” Ahlers says. “One of the top genes was [for] insulin receptor." Essentially, flies with certain versions of the gene died more quickly.

That caught the researchers’ attention: Epidemiological studies have shown people with diabetes — a disease rooted in insulin deficiency — are more likely to develop West Nile than others. The research on the nexus of West Nile, insulin and diabetes since then has been slim, Goodman says, and they decided to try restarting the discussion through experiments.

The team then moved to test whether insulin exposure might contribute to mosquito survival, too. The researchers asked whether feeding mosquitoes insulin-laced blood prompted any immune response; to put the focus on that response, they tested mosquitoes bred to have identical insulin receptor genes.

When bacteria or viruses enter a mosquito’s body, its immune response sets off a chain of events. It activates genes that encode for proteins, which either kill the intruders or prevent them from replicating enough to cause disease.

“There's really no way I think to get the immune system to completely eradicate [a] virus, unless we're talking about a vaccine,” says Goodman.

No vaccines exist for West Nile, dengue or Zika, but reducing the amount of virus per bite gives humans a better chance to counter its impacts with our own immune response.

To test the West Nile immunity pathway in the bodies of the live Culex mosquitoes that spread it, the researchers had to figure out how to get mosquitoes to feed in a lab setting — something Goodman says is “quite difficult.” Together, the scientists would need to develop an “artificial host” that could trick mosquitoes into biting it for a blood meal so they could deliver their specially formulated blood recipe.

“It's interesting to think about, how do you feed a mosquito on purpose?” Ahlers says. “It just felt weird and wrong to do this and grow mosquitoes intentionally, [but] we actually had a lot of fun learning how.”

But first, Ahlers and graduate student Chasity Trammell moved the experiment from Goodman’s lab, to co-author Dr. Shirley Luckhart’s laboratory at the University of Idaho, which had temperature and humidity controls best suited for the work.

After consulting a few studies’ protocols for culturing and growing mosquitoes in a lab, they landed upon a custom glass mosquito feeder design with a gory feature: sausage casing filled with liquid blood for the mosquitoes to feed on. The researchers rubber-banded the casing to mimic skin texture and filled it with chicken blood spiked with both West Nile virus and bovine insulin. (Bovine insulin is often used interchangeably with human insulin in the lab.)

“We went on a field trip to the local butcher shop [where] we bought sausage casing … and to Walmart, purchasing just random supplies that we didn't think that we would use for research, like Popsicle sticks to transfer mosquito eggs,” Ahlers says. “I think mosquitoes are gross, but I think it’s fun because the project is so impactful.”

They ultimately dosed the blood sausages with bovine insulin equivalent to the amount produced by a typical human after consuming a meal. Mosquitoes in control groups wound up with virtually no insulin, roughly mimicking a human system during a fast.

Getting mosquitoes to feed on an artificial host was tough.

“They are using such an artificial method to feed the animals that they just don't want to do it. At the end of the day the number of mosquitoes that were used in the paper [was] maybe 100 overall, even though we tried to feed 500 of them,” Goodman says.

They then took Aedes and Culex mosquito cells pretreated with insulin in a lab, and dosed them with dengue, Zika, and West Nile to identify how successful the immune response was in reducing the amount of virus.

They found that live mosquitoes dosed with insulin had about 10-fold less viral messenger RNA, which is a good indicator of an animal’s ability to create infection in humans. For the cells treated with insulin, they analyzed the actual amounts of infectious virus present, and the results were even more pronounced: There was 10- to 100-fold less virus replicating in cells as compared with control mosquitoes.

“While the approach in this study doesn’t eliminate the virus from mosquitoes entirely, it does reduce the viral burden, which has the potential to reduce the frequency of transmission,” confirms Hyde, the UW microbiology professor.

Is insulin ready for anti-viral use?

Researchers say the data is promising for implementing future antiviral programs like insulin-loaded mosquito bait or gene-editing techniques that could make mosquitoes more sensitive to insulin.

Those programs are a long way off: Right now, the side effects and long-term fallout from using these techniques remain unknown.

“It could be that what we're looking at isn't really the complete picture because there's so much we don't even know about how a gene works in the first place in a mosquito,” he adds.

Trammell is taking the lead on futures studies around these questions. “Now that we know the mechanism as to how insulin can provide protection against West Nile virus [and others] in the mosquito, the next step is to determine how we can use this knowledge to block transmission to humans,” Trammell says.

This isn’t the only attempt at reducing viral loads in mosquitoes. Some researchers are experimenting with bacteria that reduces viral load; others are trying to release sterile male mosquitoes into an environment in hopes of causing a specieswide crash.

“But of course with both of those, we [also] don't know the impact to the ecosystem,” Goodman says.

However, Ahlers says the existence of one vaccine for a prominent flavivirus offers the possibility of developing more.

“It's very interesting that [yellow fever] has had a very effective vaccine for a long time but these others flaviviruses don't, and a huge reason for that, I think, is that these really weren't on our radar as something that was critical” for the U.S. until recently, she says. “It takes a long time to develop a vaccine. … Research is very slow and it needs to be deliberate for sure, [but] we need to start thinking strategically about which viruses we think will have an impact and how we want to combat them.”