A win could mean more aggressive action to avoid climate disaster. Some environmental leaders think the lawsuit is a distraction from the action Jay Inslee and Kate Brown are pushing for. 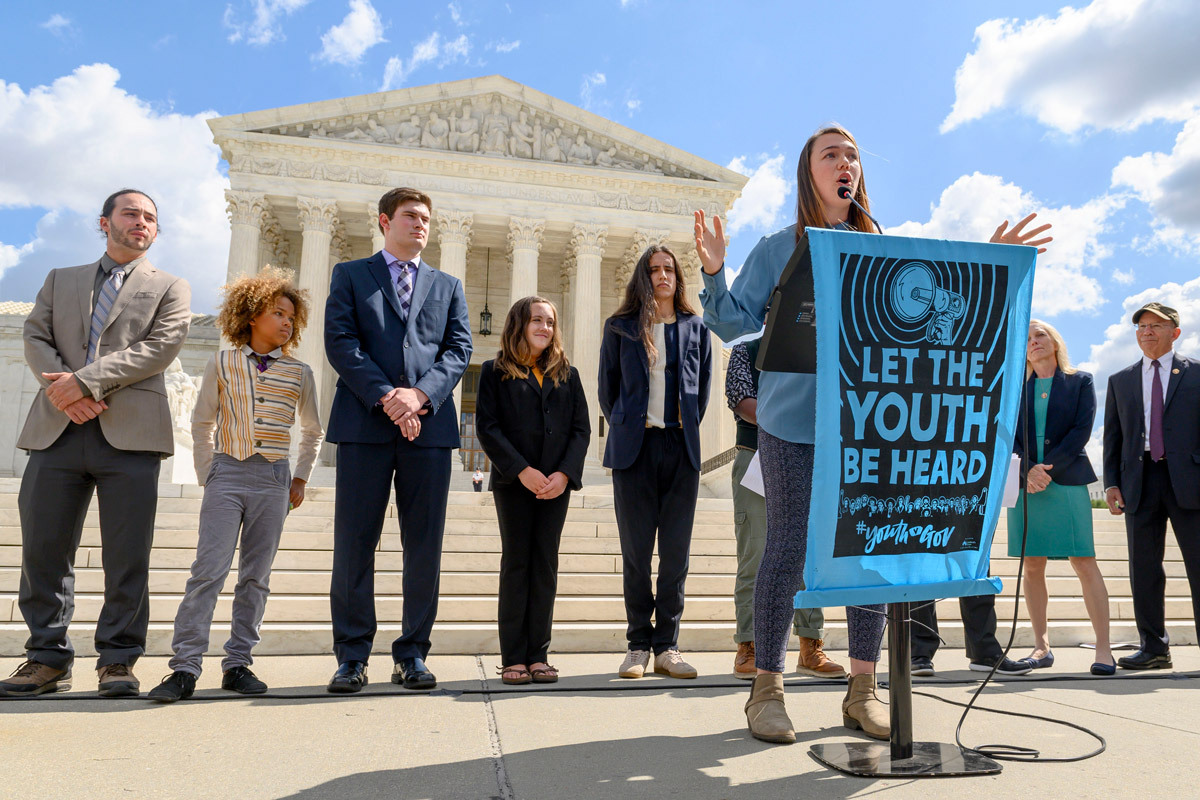 Kelsey Juliana speaks in front of co-plaintiffs of her climate case outside the Supreme Court Building in Washington, D.C. (Robin Loznak/Our Children’s Trust)

In 2011, 15-year-old Kelsey Juliana and 11-year-old Ollie Chernaik filed a lawsuit on behalf of Oregon youth, charging then-Gov. John Kitzhaber and the state of Oregon with not doing enough to fight catastrophic climate change.

A similar lawsuit is bound for a Washington state Court of Appeals. Despite the two states’ liberal legislatures and governors who cast themselves as climate activists, the cases have been met with staunch resistance. That the young activists should face such tough sledding in the Pacific Northwest highlights the tension between the often slow-turning wheels of the democratic process and the urgency of climate action.

At the core of the youth climate lawsuits is the claim that elected officials have failed to protect the public interest of future generations from the worsening climate crisis, as scientists predict and observe rising sea levels, stronger storms and prolonged droughts. Therefore, the young people’s lawyers argue, it’s the courts’ responsibility to demand that the state preserve a healthy climate for future generations by rapidly phasing out greenhouse gas emissions.

In response, Oregon and Washington have defended their actions on technical grounds — citing separation of powers and questioning the reach of the public trust doctrine — rather than denying the perils of climate change. And in the most recent cases, the courts have sided with the states. In the latest decision in Washington, for example, King County Superior Court Judge Michael Scott wrote that “the issues involved in this case are quintessentially political questions that must be addressed by the legislative and executive branches of government.”

As the youth face setbacks in the courts, some observers think the cases are a distraction that isn’t moving the needle on climate action. Suing Oregon Gov. Kate Brown and Washington Gov. Jay Inslee, both supporters of climate legislation, “defies logic,” said Aseem Prakash, the founding director of the University of Washington’s Center for Environmental Politics: “Inslee and Brown are doing everything politically feasible.”

For example, Brown said she would look into using executive authority to direct state agencies to pursue climate action following the defeat, in June, of what was seen as the most comprehensive climate bill in the country. And after voters rejected a carbon tax initiative in Washington in 2018, Inslee helped shepherd a separate set of climate legislation through the state Legislature this year. In Prakash’s view, it doesn’t make sense to target allies who are constrained by limits on their executive power. “Inslee can’t unilaterally wave a hand and change the state’s climate plans,” he said.

Though a wave of the hand might not do the trick, the young plaintiffs’ lawyers say that a pen stroke could. Either governor could choose to settle with the activists rather than argue against them in court, said Nate Bellinger, the state program manager at Our Children’s Trust, a nonprofit organizing climate lawsuits at the state, federal and international levels. “If you had a court-approved agreement, it would provide legal cover to take aggressive action on climate change,” Bellinger said. But he doesn’t see politicians willing to make that kind of end-run around legislatures that have at times been reluctant to pass significant carbon-limiting laws. “The impression we’re getting is (Brown and Inslee) don’t mind talking about climate change and taking incremental steps,” he said. “But they’re unwilling to take bold action.”

When it comes to bold action, recent parallels at the federal level show how far executives can go to push ambitious agendas. President Donald Trump’s emergency declaration on building a U.S.-Mexico border wall has caused money to be reappropriated and environmental laws waived while 30-foot-tall metal slats are erected in southern Arizona. This exercise of authority following the declaration of an immigration emergency has Democratic presidential candidates and lawyers considering the impacts of a future administration declaring a climate emergency. Several Democratic presidential candidates have already pledged to do so. Yet it remains unclear whether any of the candidates would direct their Justice Department to settle the federal youth climate case.

At the state level, politicians preaching climate action continue to fight the youth climate cases. After nearly a decade in court, the plaintiffs, now young adults, still see their case as a key that could unlock sweeping change, and they are getting frustrated. In a scathing opinion piece in The Oregonian earlier this year, Kelsey Juliana questioned whether Brown could be a leader on climate while opposing the youth climate lawsuit: “If Kate Brown is so concerned that ‘kids should not have to fight this hard to protect the planet they will inherit,’ ” she wrote, “why is she fighting us tooth and nail?”

This story was originally published at High Country News on Nov. 13, 2019