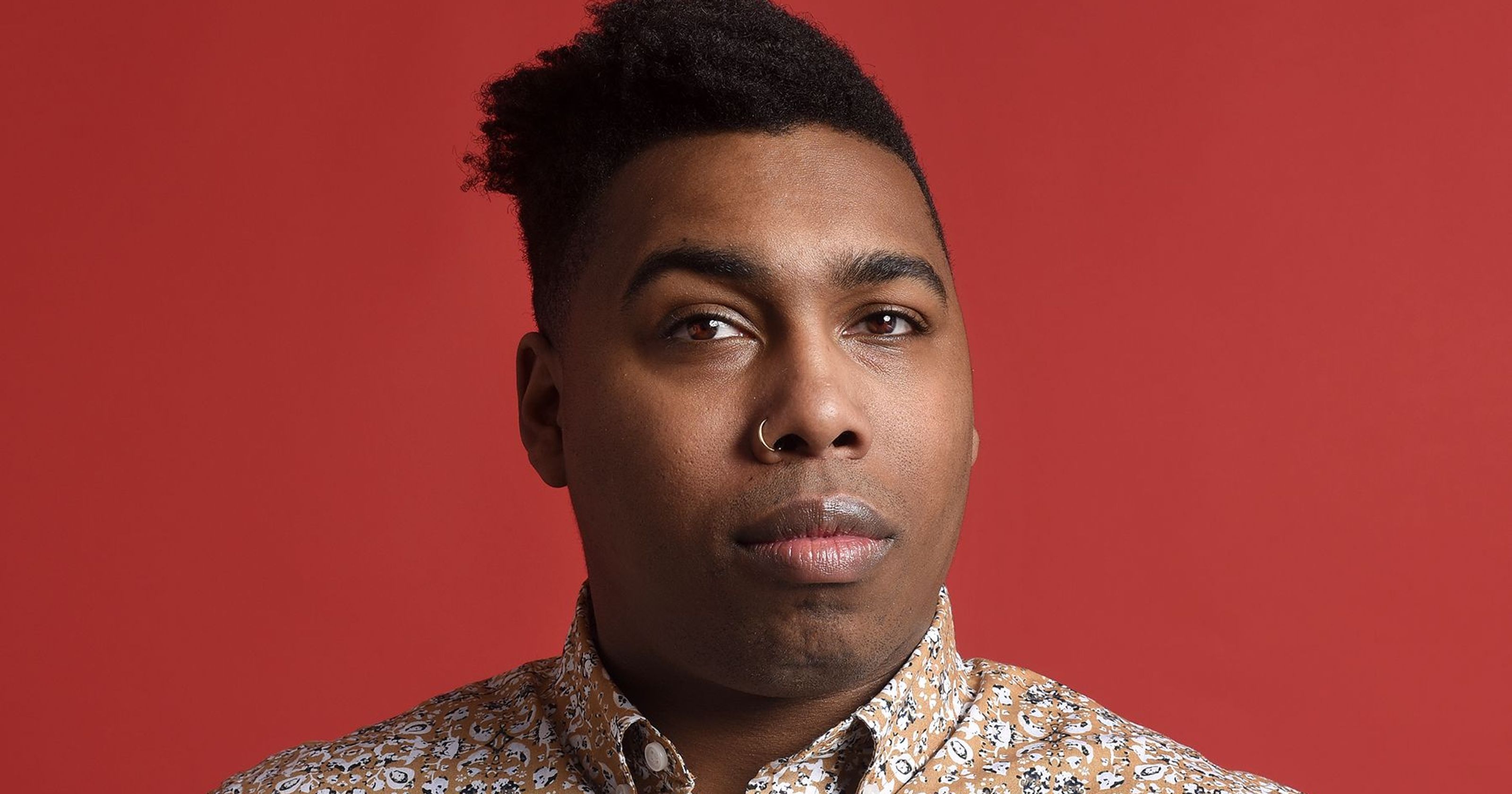 Poet Saeed Jones reads from his new memoir, “How We Fight for Our Lives,” at the Northwest African American Museum. (Photo by Jon Premosch)

It’s first Thursday again, which means time to don your most Parisian scarf and head to Pioneer Square for the country’s oldest official art walk. This week’s picks include Seattle artist Ko Kirk Yamahira, whose carefully unthreaded canvases transform the traditional painting surface into a fascinating and flowing new form of sculpture (at 4Culture through Dec. 5). Legendary Seattle painter Fay Jones is known for her pastel panoramas on paper — dreamy cartoons imbued with old tales. Her new body of work, Las Golondrinas, is in memoriam to her recently deceased husband Robert C. Jones, another prominent painter, and features tears, rain and birds in flight (at James Harris Gallery through Jan. 25). Ever re-inventing her immersive artspace, Tariqa Waters announced via Instagram that she’s created a Martyr Sauce Pop Art Museum, so catch it before she moves on to the next massively inventive idea (Martyr Sauce, Nov. 7, 6-8:30 p.m.). And sometime Seattleite and multidisciplinary artist Paul Rucker returns from parts east for a show of his oversized, imagined “Forever” stamps, featuring the faces of civil rights figures such as Emmett Till and the victims of the Alabama church bombing, who have gone “uncommemorated” by the U.S. Postal Service. (Greg Kucera Gallery, through Dec. 21). –B.D.

Brighter Future: To be heard. To be seen. To be free.

The Office of Arts and Culture continues its experiment in radical curation — by accepting art from all who submitted work for its new show Brighter Future: To be heard. To be seen. To be free. Co-produced with the city’s Ethnic Heritage Art Gallery board, the exhibit features more than 100 pieces (paintings, sculptures, photography, video) by artists of color, whose prompt was the theme of freedom. “One of the things we’re always trying to do is break down the barriers of what art is, and can be, and should be, for the public,” said OAC communications manager Erika Lindsey in an interview with Crosscut reporter Agueda Pacheco Flores. “Especially because when people think of art they think of museums where it’s rarified, it’s art with a big A.” The lowercase-a art here is a vibrant mix of works by artists at all levels, including a pop-culture portrait of a Black woman by Barry Johnson, “a painting that seems to know how cool it is,” says Pacheco Flores, and two striking bronze sculptures by artist Addison Karl, who used an accelerated patina process to make it seem like the women portrayed have been here all along. –B.D.

Saeed Jones: How We Fight for Our Lives

“There should be a hundred words in our language for all the ways a black boy can lie awake at night,” Saeed Jones, praised poet and former culture editor at BuzzFeed, writes in his recently published coming-of-age memoir How We Fight for Our Lives. With his first foray into book-length nonfiction, Jones cements his reputation as a writer to watch, and more than delivers on the buzz surrounding the book ahead of its publication. The book, which doubles as a love letter to Saeed’s Black single mother raising a gay son in suburban Texas, has hit a nerve and snagged the Kirkus Prize for Nonfiction, thanks to its powerful prose touching on oppression, masculinity, power, race, death and the shed skins we molt in the course of life’s transformations. –M.V.S.

Spooky season doesn’t have to be over yet. Head to the Kitsap Peninsula and you can surround yourself with paranormal activity. The three-day Port Gamble Ghost Conference attracts hundreds of people, including psychics, crystal healers, spiritual mediums and amateur ghost hunters. Attendees can dive into an array of workshops and panels, from interpreting dreams to “cures for paranormal problems.” Brave souls can join nighttime ghost investigations at the 130-year-old Walker-Ames house. Feeling skeptical? Listen closely to an audio recording of Anna Bell, a resident ghost (who introduces herself at the three-second mark). That’s one of several recordings visitors have collected over the past 10 years as proof of paranormal activity.

Port Gamble's Pete Orbea organizes the yearly Ghost Conference in the historic seaside town, where the white picket fences and old New England vibe look straight out of a Stephen King novel. “People bring in an audio recorder, maybe a video camera or EMS meters,” Orbea says of the ghost tours. This year he's added to the roster the former home of Mike Drew, who helped the Puget Mill Company become the largest owner of timberland in Washington during the 1800s. Orbea isn’t exactly sure why so many spirits remain in town. He suspects they like it too much to leave. But he doesn’t rule out the colonial takeover of Indigenous land as a reason. This year Orbea is excited about featured speaker Jeffrey Verrege, a local graphic illustrator and Port Gamble S'Klallam Tribe member who'll explore regional Native American myths and legends, bringing more depth to the town's haunted history. –A.P.F.

Two anxiously alternating notes. That is all film composer John Williams needed to keep Jaws viewers at the edge of their seats — and to create one of the most recognizable movie themes of all time. As for Williams’ scores of the Harry Potter and Star Wars franchises, just a few seconds of tinkling bells or the march of the epic brass suffice to transport fans instantly to Hogwarts or “a galaxy far, far away.” The word iconic is overused these days, but Williams’s film music truly deserves the appellation. His scores for major movies and film franchises such as Jurassic Park, E.T. and Star Wars have lodged into our collective brain, won countless awards and made Williams the second most-nominated individual at the Academy Awards ever, just behind Walt Disney. Conductor Lawrence Loh guides the Seattle Symphony Orchestra for a night full of Williams’ — and movie history’s — greatest hits. –M.V.S.

So much (most?) of the information we take in arrives in the form of pixels. Which makes it all the more thrilling for the senses to delve into the Short Run Comics and Arts Festival. The annual shrine to paper and pen and small press printing is now in its ninth year, and has expanded from a ragtag band of comics and zine makers to a huge gathering of comics and zine makers. Some 280 exhibitors are expected this year, hailing from all over the country. In addition to all manner of homemade comics, zines and posters, the weekend festivities include live screen printing, a celebration of Seattle-based animated filmmaker Bruce Bickford (who died this year) and a screening of The Illumination of Jim Woodring, a new documentary about the legendary Seattle comics artist, who will be in attendance. Attend and show there’s still strong support for artful analog pursuits. –B.D.

Grappling with the death of a loved one is often a burden too heavy to carry alone. Fifteen years ago, KEXP FM radio DJ John Richards came up with a special radio show to publicly mourn the loss of his mother: The Mom Show. The show has since grown into a yearly tradition honoring dearly departed loved ones (it will air on KEXP Nov. 14, 6-10 a.m.). That tradition now also includes a live event hosted by Richards and his wife, Amy Lindsey Richards. The evening aims to bring people together through candid conversations about loss and cathartic musical performances by, among others, LGBTQ-friendly chorus Puget Soundworks, Seattle soul singer Adra Boo and Olympia band Oh, Rose. “Being in a room, in this room,” Richards told me, “is like being at the second funeral for your loved one. But this time you are more prepared to grieve and to heal. The first time you go through it, you are never ready for that.” –M.V.S.

In Larissa Fasthorse’s comedic romp, well-meaning but inept and absurdly politically correct adults join forces to write a Thanksgiving children’s play that will check all the “woke” boxes. In the process, they check every box marked “overzealous but clueless white people.” The upshot is a broad comedy rife with milewide caricature (including a surfer-dude-style wannabe actor, played to perfection by Martyn Krouse), but one that's also observant and often funny. Though you can’t help feel a bit sorry for the hapless teacher Logan (a suitably anxious Janelle Jordan), as she tries to corral her boyfriend Jaxton (Krouse), eager but dorky fellow teacher Caden (Andrew Shanks) and a not-so-dumb starlet who Logan wrongly presumed was Native American (Alicia, played by a marvelously dippy Zenaida Rose Smith) into “devising” a piece for youngsters that doesn’t regurgitate the old racist myths of U.S. history perpetuated in the actual class activities and children’s activities shown here in cringe-inducing video clips.

Fasthorse (a member of the Sicangu Lakota tribe) takes no prisoners here. She shreds white liberal do-gooders who screw up royally in the first place by not involving actual Native Americans into their venture. They also discover there’s no way to turn a Turkey Day pageant into a win-win without omitting the historical taint of land grabs and racist genocide. There’s a whiff here of the damned-if-you-do, damned-if-you-don’t critique of white privilege that can lead to a stalemate. But the show, directed with comedic aplomb by Kelly Kitchens, is certainly a great conversation starter with some dead-on satire. –M.B.

If you go: The Thanksgiving Play, Seattle Public Theater at the Bathhouse Theatre, through Nov. 16. ($17-$34) 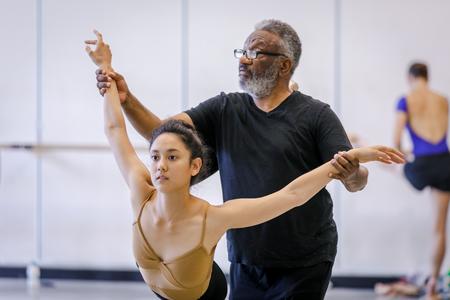 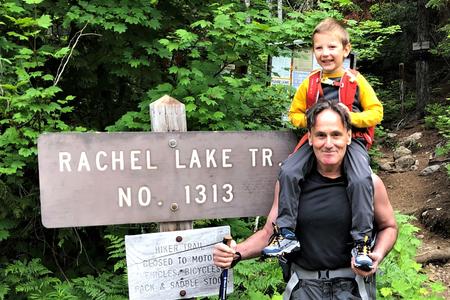 A walk in the woods with Seattle writer David Guterson

In a new epic poem, the author of “Snow Falling on Cedars” encourages readers to enjoy the journey out and the turnaround.

A walk in the woods with Seattle writer David Guterson

In a new epic poem, the author of “Snow Falling on Cedars” encourages readers to enjoy the journey out and the turnaround.