The view from The Phinney

Managing an apartment building in the early days of the housing crisis, I got a glimpse of the old Seattle. 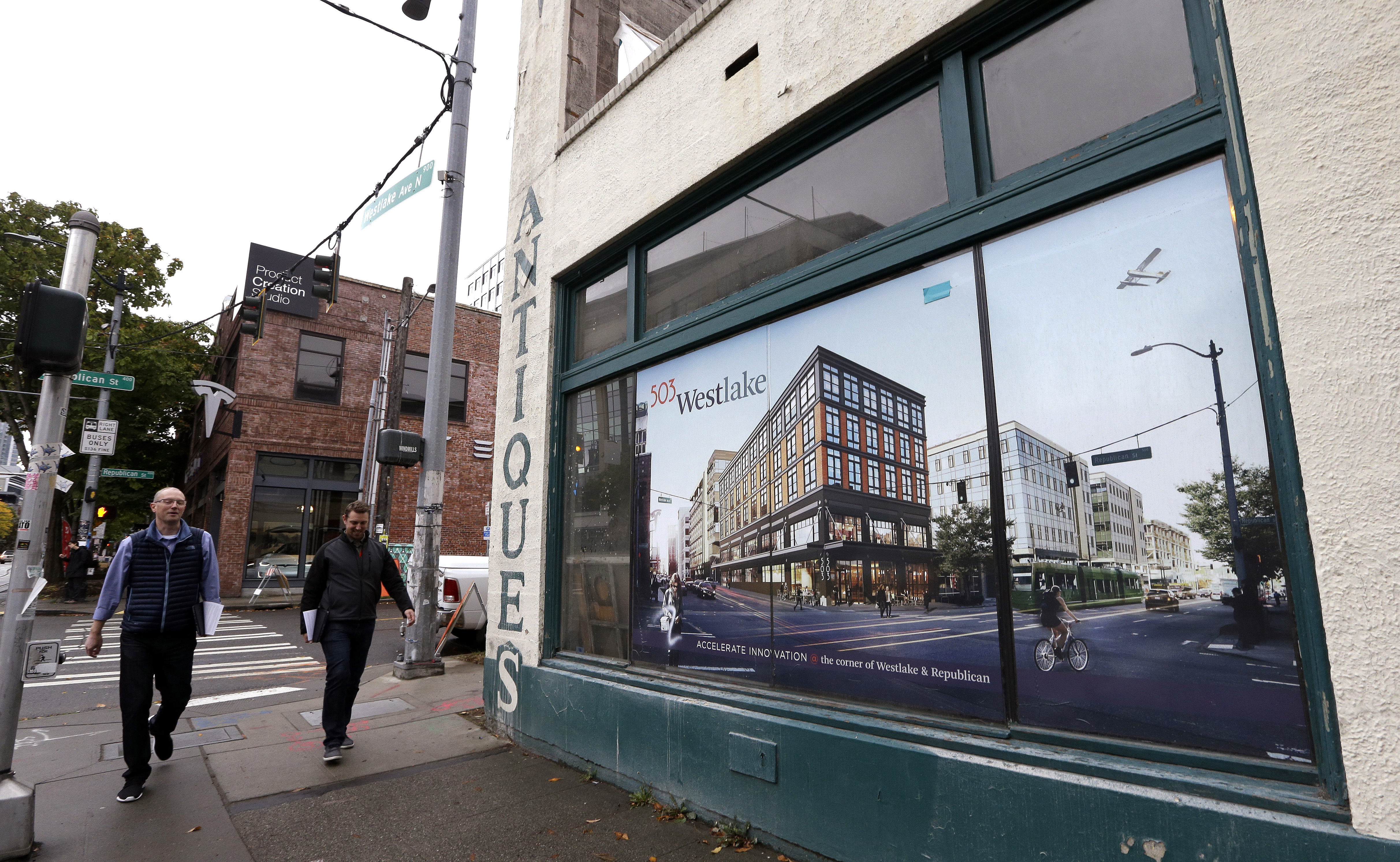 Pedestrians walk past a former antique shop, now a facade waiting to be turned into a condo development near Amazon's South Lake Union headquarters, in Seattle. Since opening its headquarters in the previously sleepy warehouse district known as South Lake Union, in 2010, Amazon has expanded from a workforce of about 5,000 to more than 50,000. Meanwhile, housing construction in Seattle has struggled to keep pace, and both rents and homelessness have skyrocketed. (Elaine Thompson/AP)

Early this year, at the annual Martin Luther King Day celebration at Garfield High School, I had a chance conversation with a man who recognized me as his former on-site apartment manager. He had moved into the stately old brick building on Phinney Ridge not long before I moved out. Now, five years later, he still lived there. I didn’t have to ask; he knew I wanted to hear about Helen, the landlady. She had finally died, he told me, just the week before. She was 104 years old. It was like the universe had sent me an emissary to deliver the news.

“The Phinney” was built in 1930, back when one of Seattle’s many streetcar lines ran up through Fremont and along Phinney Avenue, two years before the Aurora Bridge first opened and Aurora Avenue bisected Woodland Park. It was a large building, 30 spacious studios and one-bedrooms, with a cavernous lobby and halls carpeted in deep red, like a grand old theater. In 2006, when my partner, Scott, and I first moved in, the manager was an elderly woman named Verna. We’d landed in Seattle less than two years before. We didn’t have any credit history, or confidence-inspiring jobs, or much more in the bank than was needed to lay down a deposit and our first month’s rent, a cool $725. But Verna thought we seemed like good kids and she let us in. From her we got our first glimpse into the character of the landlady, who at that time must have been a spry 91. “She squeezes that nickel,” Verna told us, “till the buffalo roars.”

Not long after, a spot opened up in a retirement community and Verna left. We offered ourselves up as the new managers and Helen agreed. Every few weeks she would drive down to the building — she didn’t stop driving until late into her 90s — to empty the quarters from the washers and dryers. I would find her walking slowly down the basement hallway from the laundry room, stooping under the weight of an enormous change purse. Would she like my help? No, no. She wasn’t going to let me or anyone else touch those quarters.

And yet, neither did Helen replace the old 50-cent coin machines with new ones that charged more. And once you were in the building, she didn’t raise your rent. Some tenants had lived there for 15 years or more. One woman, whose picture windows framed panoramic sunset views of the Olympics over Puget Sound, paid less than $500 per month. Once the cash was in hand, Helen really didn’t like to let it go, but she wasn’t all that concerned about maximizing the cashflow.

Back in 2006, South Lake Union was still a semi-industrial wasteland; Jeff Bezos hadn’t yet planted Amazon’s flag there. But Seattle rents had already begun to rise after a slow period, and apart from a recessionary dip after 2008 they would keep climbing. Today rents have more than doubled, and the city’s population has grown by a whopping 30%.  Part of the reason for rising housing costs was the rapid influx of tech workers and the fact new housing construction wasn’t keeping pace; at the same time, affordable older buildings were being demolished to make way for market-rate units. But that wasn’t the whole story. Seattle was also about to become a prime destination for Wall Street investors and global surplus cash. They sought profitable real estate in a world where reliably strong returns were becoming increasingly hard to find. These new incorporeal landlords were most definitely concerned about maximizing the cashflow.

Homelessness rose, too, in near lockstep with rents. We began to notice more and more RVs parked along Phinney Avenue. Early one morning we got a call from a tenant who was afraid to leave the building because a homeless man was asleep in the entranceway, blocking the door. Scott went downstairs to investigate. The man was a familiar character in the neighborhood, notable for the large plush duck he always carried with him; we didn’t know his name, so privately we called him Duck Man. In spring and summer he would decorate his temporary abodes with flowers. Once someone left a big red antique truck parked near the building, unlocked, for several weeks. It was soon bedecked with blossoms in Duck Man’s signature style, and we guessed he had taken up residence there. Now Scott woke him up and asked if he could move, explaining the situation. “What, is she afraid of the duck?” he asked, and wandered off down the street. 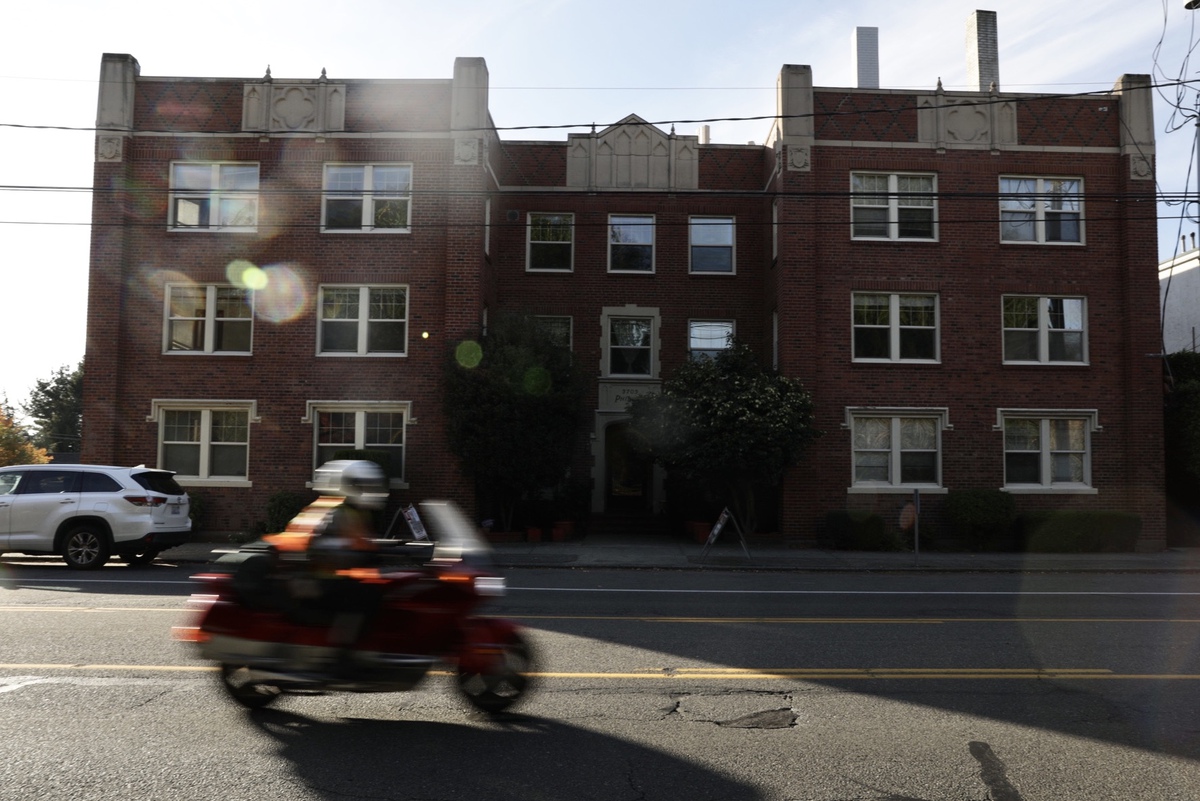 From the old-timers among the tenants we got a glimpse of the old Seattle. One woman had grown up here in the 1960s and ‘70s, when she had attended the University of Washington. She told us how, back then, you could put yourself through college working part-time and save up enough to put a down payment on a house soon after. That sounded crazy.

During those years living at The Phinney, I got good at snaking drains. There’s nothing quite like the satisfaction of dislodging a stubborn clog 20 feet in, and I enjoyed the work, most of the time. Once a tenant called to report a clog, and I asked her which drain. All of them, she said. When her kitchen sink stopped up, instead of notifying me she started using the bathroom sink. When that clogged too, she resorted to the tub. By the time I arrived, there was a lot of rotting organic matter in those pipes, along with an odd assortment of nonorganic items that had no business being there. I wrestled with the snake for hours, wearing a respirator to cut the stench, but when I was done those drains were all running clear. If I encountered a problem I couldn’t fix, I’d call the one plumbing outfit that was still willing to come to the building. They knew Helen would phone after every job to haggle over the bill, but I guess they had learned how to handle her.

Helen loved to tell stories, and she saved up a lot of them over the years. At one time she owned nearly 20 buildings in the Seattle area. Listening to her talk, it was sometimes hard to avoid the suspicion that in less affluent neighborhoods she had been something like a slumlord. In one building, she told us, a couple were running “a dope den.” They would fight all the time, loudly and violently, disturbing the neighbors. Her eyes twinkling — Helen was clearly proud of her resourcefulness, as well as her capacity for mischief — she told us how she took matters into her own hands. One day when they were out, she removed their front door from its hinges and hid it in a closet elsewhere in the building. Apparently their behavior improved.

Helen never seemed all that concerned about the nuances of landlord-tenant law. Once or twice we tried to explain to her that she was supposed to give people notice before entering their apartments, but she persisted in the belief that rapping on the door and shouting “landlord calling!” was entirely sufficient.

For better and for worse, property owners of Helen’s ilk are on their way out. Sure, there are still plenty of local landlords, but real estate is more and more a big money game. The old way had its advantages; still, reaching beyond our personal experience, nostalgia is hard to sustain. Had we been anything but a heterosexual white couple, would we have sailed into that building, or that gig, with the same unbureaucratic ease? I don’t mean to cast aspersions on Verna — for all I know, she could have been the wokest old white lady around; we never got to know her that well — but I’m not confident the answer is yes. Personality-based rent control is a wonderful thing if you luck into the right landlord, but it’s not a systemic solution to the housing crisis.

By the time we moved out of the building in 2013, Helen was slowing down just a little bit. She would tell us about what the doctors were going to do to her next. They were going to freeze her eyeball. They were going to inject glue into her spine. Ailments that would have spelled the end for a weaker soul barely seemed to trip her up, and we imagined her turning into some kind of immortal bionic woman. But even she couldn’t live forever. The Phinney is listed for sale now. If you have $9.3 million to spare, it could be yours.