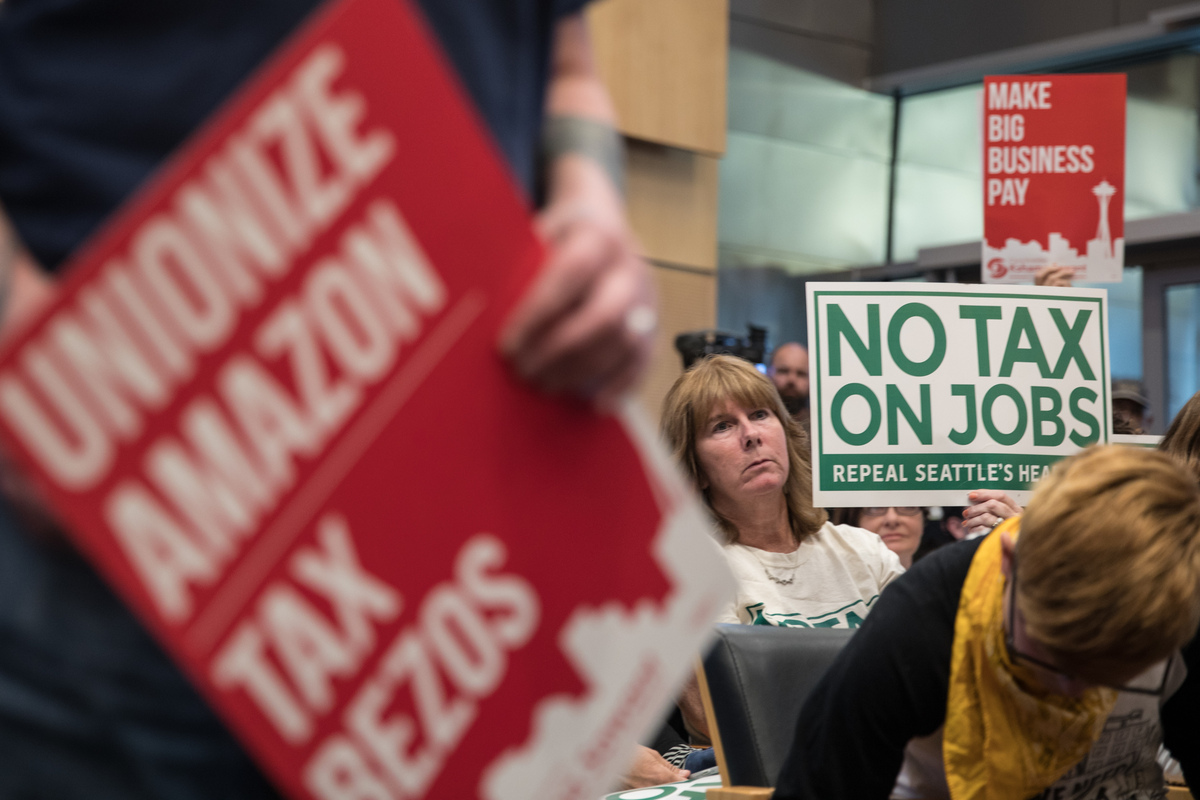 A proponent of repealing the head tax watches as a city council session voting to repeal the controversial legislation ends at City Hall in Seattle, June 12, 2018. (Matt M. McKnight/Crosscut)

When she first ran for her seat in 2015, she spoke positively of a “head tax” proposed by then-Councilmember Nick Licata, for whom she was a staffer, as a way to replace some of the cost of a transportation ballot measure before voters that November (Licata’s proposal did not move forward).

As a council member in 2016, she suggested a head tax of her own as a way to permanently fund the city's Office of Labor Standards. The council, however, chose a different path.

In 2017, Herbold was one of a number of council members who proposed a per-employee tax on high grossing businesses — again, a head tax — in the middle of budget deliberations. That tax also sputtered, failing 5-4.

Most recently and memorably was in 2018: The council unanimously adopted a business tax, only to repeal it a month later in the face of a potential citizen’s referendum that would have sent it to the ballot.

Following a comfortable reelection this month, Herbold is now surrounded by a council that appears ready to revisit the idea, at least outwardly. A majority of incoming members have explicitly called for implementing a head tax and several more have expressed openness to it — kindling hope within Seattle’s leftist base that the council will finish what it started in 2018 and, in Councilmember Kshama Sawant’s words, “tax Amazon.”

Sawant has stoked that flame. After Amazon spent $1.5 million in its unsuccessful bid to elect a council friendlier to its interests, Sawant called the election a progressive “mandate” and said the council should “urgently pass a strong tax on the largest businesses in the city, like Amazon.”

Councilmember-elect Tammy Morales, who has said she supports a head tax and was elected by more than 20 percentage points, told Crosscut it would be appropriate to return to the idea. “Looking to big business to contribute to the public coffers is a conversation we should have again,” she said.

But Herbold isn’t so sure she’s ready to revive that fight just yet.

“People have expectations of how everything’s going to shake out,” she told Crosscut. “I don’t think we can know that until we’re all working together. I’ve proposed an employee hours [or head] tax three times. That doesn’t mean I’m ready to do it out of the gate in 2020.”

That’s not to say Herbold no longer supports the idea. But, she said, she wants to be careful.

“I don’t know what they are, but I think there are some lessons we need to learn,” she said. “For instance, San Francisco put something on the ballot. That might be a better approach. I don’t think it’s fair really for anybody to be making predictions until we’re all sitting in our seats in 2020.”

Seattle’s election was widely viewed as a failure for the city’s business community, as represented by the Seattle Metropolitan Chamber of Commerce. The chamber had strongly opposed the 2018 head tax and seized on its chaos to push the message that the council was rudderless and unaccountable.

Five out of seven of the city’s races went against the chamber. Morales, Sawant and Herbold join council members Teresa Mosqueda and Lorena González as outspoken supporters of the head tax — a majority, but by just one vote.

Herbold’s comment offers a clue into how the new council may proceed. Even if the other four more progressive council members wanted to immediately revive the tax, without Herbold they’d likely fall short of the votes to do so.

In a more general sense, Herbold’s remarks get at the question of whether the most progressive bloc of the council has a mandate, as Sawant claimed.

For some progressive politicos, the answer is yes.

“They unquestionably have a clear mandate from voters to implement progressive policies and especially progressive tax reform,” said Robert Cruickshank, who worked for former Mayor Mike McGinn from 2011 to 2013 and continues to be an advocate for progressive policies. Whatever the details, he said the council should not equivocate on finding a way to tax big business and specifically Amazon.

“I would also argue that momentum matters,” he added. “Strike while the iron’s hot…. I think that the council needs to recognize that Amazon and big businesses understand they lost.”

But, ironically, Amazon’s last minute donation — widely blamed for turning at least two races against chamber-supported candidates — has provided candidates who did poorly in the election an alternative narrative that runs counter to the idea of a progressive mandate: that the national conversation around corporate influence eclipsed what had been a referendum on the council.

Political consultant Crystal Fincher recently framed it to Crosscut as “more the story of the failure of the business candidates than it is a sweeping of progressive candidates.”

“I wouldn’t call it a mandate,” chamber CEO Marilyn Strickland said of the elections. “I would say that this comes back from campaigning and sloganeering to governing effectively. Because you still have tens of thousands of people who voted for our candidates.”

Even on the broader question of whether the city needs to raise more revenue to pay for homeless services or housing, Strickland said she did not think that question should be viewed as settled, despite the election of a large number of candidates who called for just that.

Former Mayor and Councilmember Tim Burgess, whose political action committee, People for Seattle, supported the same candidates as the chamber, allowed that the council “might” have a mandate. “I understand why [Sawant] takes the positon she does and why her supporters do and that’s OK and we’ll see how that plays out,” he said.

At the same time, Burgess still believes the underpinnings of voter dissatisfaction remain and that, if the council runs out too quickly with policies like the head tax, they may look around and find themselves alone.

In San Francisco, voters approved a business tax to pay for homeless services with 60% of the vote. In Seattle, despite all the rancor from 2018, some polling suggests — however faintly — a head tax could have a shot on the ballot. In the most recent Crosscut/Elway Poll, 56% of respondents said they would support some sort of tax on large businesses to pay for homeless services. And if it did go to voters, it would share the ballot with a man named Donald Trump.