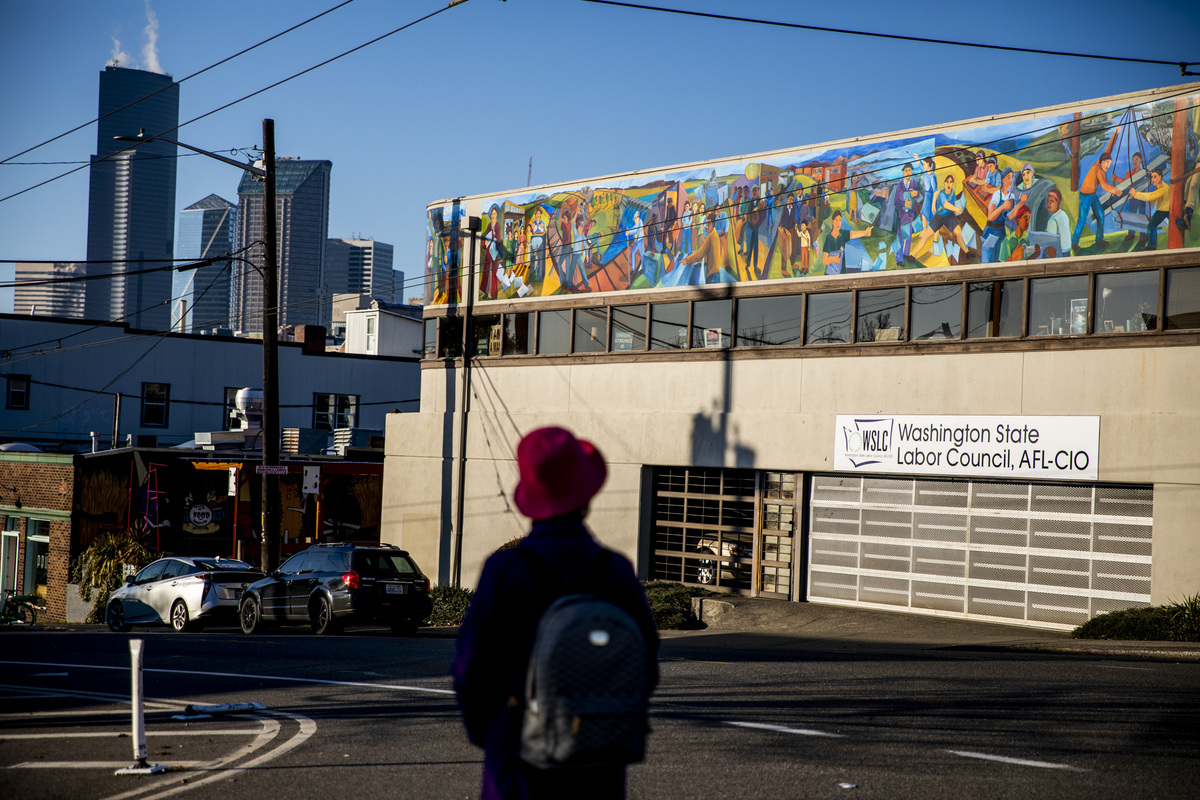 A pedestrian walks by the Jackson Street Workers Mural on the Washington State Labor Council building in Seattle on Nov. 21, 2019. (Dorothy Edwards/Crosscut)

This summer, I visited Chicago for the first time, spending five days at The Poetry Incubator for community-engaged poets — all organizers, activists and builders. Alongside 24 others, our cohort considered what it means to be a “community-engaged poet” in our respective hometowns. It was the type of arts retreat that could be hosted only in the Windy City.

People from Chicago are deeply attuned to their history — both political and cultural. The Chicago artists I met know where they come from and how they got there. I happened to be in town on the 100th anniversary of the Chicago race riot of 1919.  Despite the bloody week having been virtually wiped from our country’s collective consciousness, the centennial was marked by over a dozen events across the city. It was a powerful testament to how Chicagoans — artists, politicians, activists — do the hard work of remembering their shared history and appealing to their culture when imagining a better future.

In Washington, by contrast, our political discourse has been shaped by industry. Today, it’s Amazon, just a generation removed from Microsoft and Boeing. Before that it was agriculture, logging and pioneering. In part because of our geography and colonial history, we have long fancied ourselves the "tip of the spear," an "innovative" region that values "disruption," and we have the political resume to prove it.

At the ballot, we passed marriage equality before the U.S. Supreme Court overturned the Defense of Marriage Act. We passed universal background checks at a time when less than half of all Americans believed we needed stricter gun laws. And we passed a $15 minimum wage years before major presidential candidates were declaring the need to do so during nationally televised debates. We love being the future.

But in constantly embodying the future, we are vulnerable to forgetting our past. If our political leaders use language that is only future-facing, it comes at the cost of not remembering how we got here. The Denny, Mercer and Yesler families remain permanent fixtures in our city, but few could tell you who William Gross is or name each of Seattle’s Gang of Four. Today, we do land acknowledgements, but this gesture means little without an accompanying analysis of — much less action toward — how to become better stewards of the land we occupy. At minimum, politicians could lend no less than their full-throated support for those Coast Salish tribes fighting for federal recognition. Every February, leaders observe the legacy of the U.S. incarceration of Japanese Americans with Day of Remembrance celebrations, but Japan Town continues to shrink while the people who built Chinatown-International District are priced out. The historically Black Central District gets even less support from politicians.

In constantly embodying the future, we are vulnerable to forgetting our past.”

If our city’s political discourse is deprived of the stuff of history, it’s also ironically stuck in the muck of our contemporary crises — homelessness, housing affordability and the suffering this current iteration of capitalism has forced upon tens of thousands of our neighbors. Stretched to its limits by the ongoing influx of new residents — a thousand people every week — the lack of shared history and narrative leaves us with no common ground, exacerbating the polarization of political discourse.

If our political leaders don't discuss the biggest issues facing us today in the frame of our shared history, then when they talk about the future, they're talking about a version of the city and region removed from where we are now. It’s a version of the city that doesn’t include the people — mostly people of color and Indigenous people — who have made this city what it is.

In some ways, political leaders are hamstrung. After all, the limits of what they say are defined by what’s happening in our local culture. At every level, political discourse is a reflection of the messages and narratives art and culture convey. To cite an overly simplistic example, Will and Grace aired on television a full 14 years ahead of when marriage equality made it onto a state ballot. In this way, art and cultural institutions play a uniquely important role in setting the terms of political discourse. In addition to telling us who we are and how we arrived here, the work of art and culture is to tell uncomfortable truths, often to power, something Seattle needs more of.

Many high art institutions in Seattle are unwilling to reckon with the ways culture is displaced in the city, never mind their often indirect role in that displacement. They want the Black and Brown art but not the artist, and if they have to take the artists, they definitely don’t want the communities those artists come from. I, for one, am a beneficiary of a few of these institutions that have granted me fellowships and support for my writing; I am simultaneously grateful and skeptical to be a part of an influx of color in highly visible positions. I’ve participated on panels and workshops where I’m regularly the only person of color. This has improved over the years, but the rooms have remained the same — largely white — especially if the event is ticketed. And, yes, the leaders of these institutions are also predominately white.

To be clear, this applies strictly to institutional spaces, which often feature art divorced from the community it reflects, the audience it's meant for or the broader culture the institution is curating. And art curation is always a political act. Aesthetics, after all, has always been wielded by power to advance its own ends. None understood this better than the Third Reich, which privileged ancient Greek and Roman work over German art made at the time in order to advance values of racial superiority. Contemporary America is in the throes of a similar reckoning, as it works through what to do with over 800 Confederate monuments erected on public lands. In Seattle, art products are used to signal progressive virtues like inclusion and diversity, but gallery exhibits, public installations, readings and other events are rarely accompanied by an equitable ceding of power or capital. As curation is largely concerned with omission — what gets left out — the difference between the makeup of Seattle’s high art institutions and the artists they celebrate tells you everything about their priorities.

In Chicago, there’s a long tradition of artists as explicit organizers, community builders and culture workers. It’s assumed from the jump. In Seattle, there’s a strong tradition of that, too —the Langston Hughes Performing Arts Institute, Youth Speaks Seattle and the Vera Project. Our legacy of arts organizing has always had overtones of counterculture. Even the queer and grunge scenes of the 1980s and 90s, with its hyperlocalized expressions on Capitol Hill, were deeply invested in community. But that tradition is dying out — or, perhaps more accurately, its contemporaries are being displaced.

Seattle is experiencing unprecedented transformation, with profound implications for the future of cultural life in Seattle. Yet at the same time, those very same institutions do nothing about housing affordability, homelessness and displacement because that’s not core to their mission. They claim a “commitment to racial equity” but don’t have the courage to take a position on upzoning, land use policy or ending the sweeps of homeless encampments. These are the defining fights of our time and will shape the future of our city. We need everyone to participate.

I love Seattle and often turn to its art scene as a reprieve from increasingly nasty, dehumanizing local politics. Art, economics and community are unavoidably intertwined. Many artists have been pushed out as Seattle's economy soars. My family still might be. When our art spaces refuse to acknowledge or address this ever-growing loss, they become complicit in the marginalization of the very culture these spaces claim to cultivate. What gets lost is not just the art, music, theater or literature produced by a talented individual but the whole marginalized community that made that individual possible in the first place. And because of the way our economy is structured, this often means immigrant, Black, brown, queer and trans communities are the ones who bear the brunt of this inaction.

I returned home from the Poetry Incubator wishing Seattle had more of what Chicago’s arts and politics have going for it. We need more history in our politics, and we need more politics in our art institutions. If both political and arts leaders led with the courage of their convictions, we’d take an important step toward shifting resources to our communities that need it. And we really need it. But if there’s any hope, it will be found in arts institutions more assertively participating in the political arena, and elected officials drawing more deliberately on culture and shared histories. 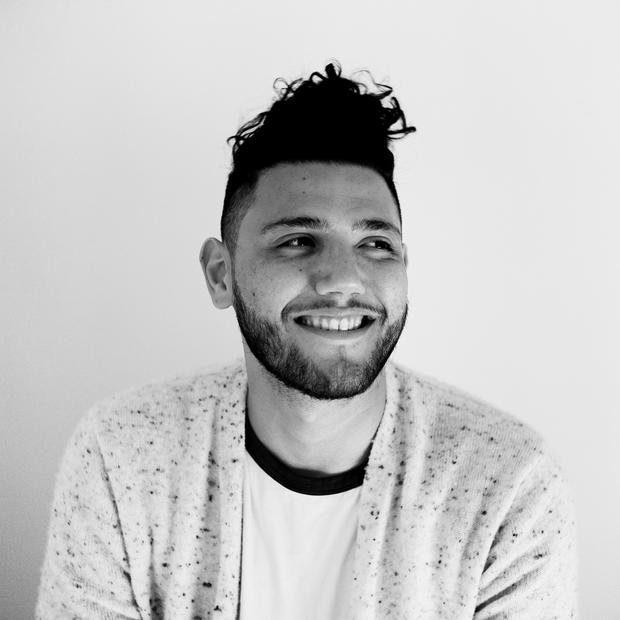 Dujie Tahat is a poet and political communications strategist.