The governor wants to draw $319 million from the state’s rainy day fund to pay for homeless services over the next three years. 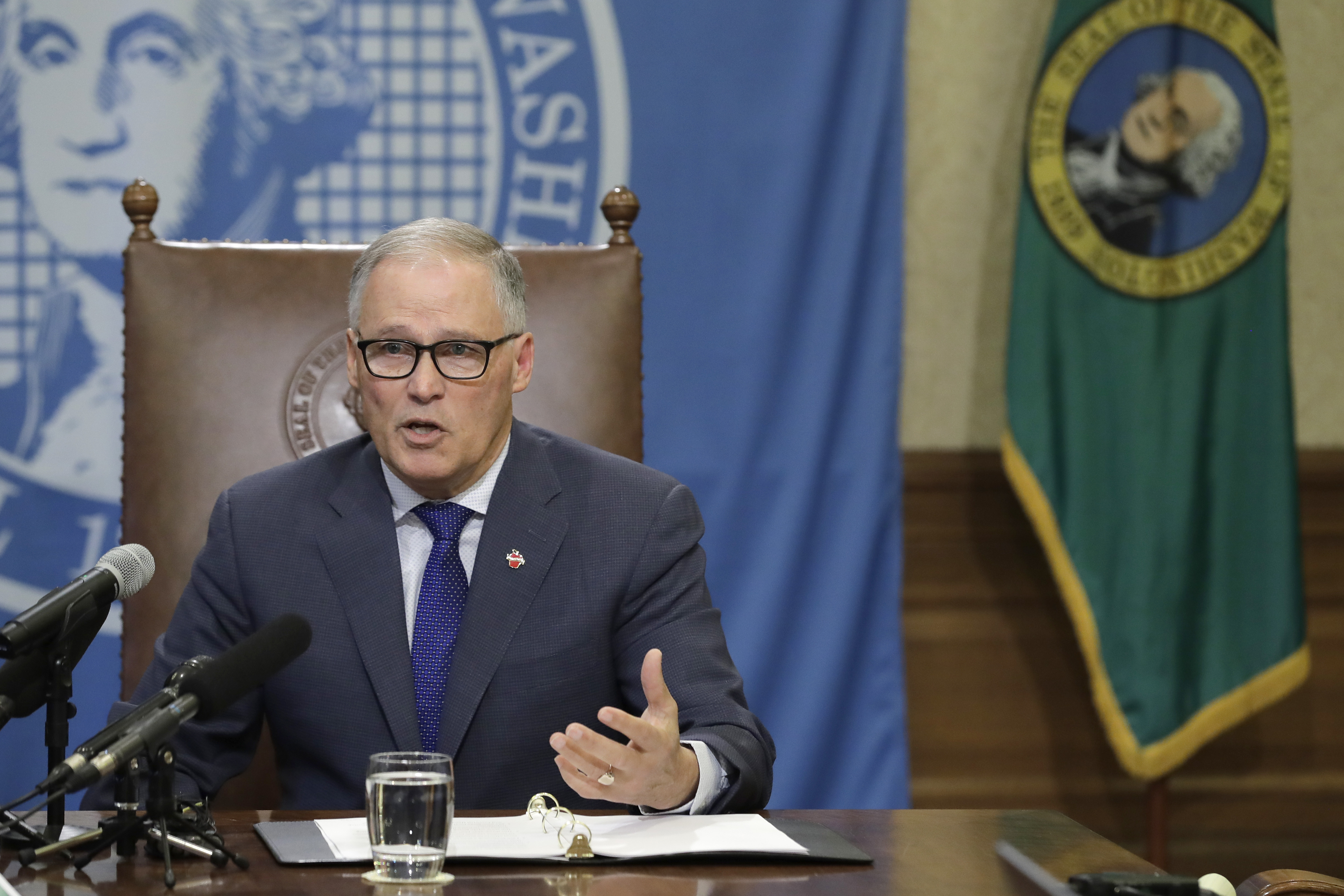 Washington Gov. Jay Inslee talks to reporters about his proposed supplemental state budget, Wednesday, Dec. 18, 2019, at the Capitol in Olympia. Inslee said he wants to spend more than $300 million from the state's emergency budget reserve to add 2,100 shelter beds and provide other help to combat homelessness. (Ted S. Warren/AP)

A $319 million infusion aimed at dramatically reducing the number of people living on Washington state streets tops Gov. Jay Inslee’s wish list heading into the 2020 legislative session, according to a budget plan he released Wednesday.

In his 2020 supplemental budget, Inslee proposes to pull those millions from the state’s emergency fund to pay for measures he claims will cut the number of Washington residents living outside by nearly 50% during the next two years. The plan calls for about $150 million of that money to go toward homeless services and rental assistance in the coming fiscal year, with the remainder to be spent during the 2021-23 budget cycle.

The Democratic governor said his plan would help open up 2,100 shelter beds. On top of that, the plan would provide rental assistance to about 2,900 people, and assist in placing about 1,200 more people in permanent supportive housing, the governor’s office said.

“We know this homelessness problem touches every part of the state,” Inslee said during a Wednesday press conference at the state Capitol. Surrounded by handful of mayors, Inslee said the problem affects rural and urban communities alike, on both sides of the state.

The money going toward homelessness is by far the largest new investment contained in the $53 billion budget plan Inslee released Wednesday. The plan would increase state spending overall by close to $1 billion, compared with the two-year operating budget Inslee signed into law in May. About half of Inslee’s proposed spending increases would cover the cost of maintaining existing programs, rather than paying for new policy initiatives, his budget office said.

While Inslee has floated new taxes as part of previous budget plans, he did not propose tax increases this time. Inslee said the Legislature’s job in 2020 is not to write a whole new budget, but rather to make adjustments to the two-year spending plan lawmakers approved in 2019.

He said tapping the state’s emergency fund — often called the rainy day fund — allows for efforts to combat homelessness to begin immediately, rather than waiting on new revenue.

“We need a response that will match the scope of this crisis,” Inslee said.

The governor added that seeing people struggling on the streets is “not acceptable in the state of Washington.”

“It is something that needs an immediate response, and the rainy day fund is immediately available,” he said.

Also Wednesday, the governor released a transportation budget that would reduce spending on transportation projects by $454 million in the coming budget year. Those proposed reductions come in response to voters’ approval of Initiative 976, which is designed to cap annual car-tab fees at $30.

Mostly, the reductions would be accomplished by delaying planned highway and transit projects not yet under construction.

While the car-tab cap is on hold as a legal challenge plays out, Inslee said the money still isn’t available for legislators to spend freely. His budget assumes that I-976 is going into effect, and sets money aside for now while the courts decide whether the measure is unconstitutional.

The initiative, which was sponsored by conservative anti-tax activist Tim Eyman, will cut more than $4 billion from state and local transportation projects over the next six years, according to an analysis from Inslee’s budget office.

“We simply don’t have the money to spend,” Inslee said Wednesday.

Eyman recently announced he would challenge Inslee during next year’s gubernatorial race, with plans to run as an independent. Several Republicans have said they plan to run as well, including former Bothell Mayor Joshua Freed, state Sen. Phil Fortunato and Loren Culp, the police chief in Republic.

State lawmakers will convene for a 60-day session starting Jan. 13, when they will consider Inslee’s budget plan. Leaders in the House and Senate are expected to release spending plans of their own in the coming months, before they are scheduled to adjourn in March. Right now, Democrats control both chambers of the Legislature.

In a text message, state Rep. Timm Ormsby, the House budget writer, seemed somewhat receptive to the governor’s idea of pulling money from the rainy day fund. The Spokane Democrat called it a “creative approach to ease the scourge of homelessness.”

Republicans, however, are less likely to embrace Inslee’s proposal. Using the emergency fund as Inslee suggests would require a 60% majority vote, meaning some Republicans would have to support the move for it to take effect.

Additionally, “I have deep concerns about taking money out of the state’s saving account,” said Braun, who is from Centralia.

He said he thinks the state needs to build up a healthy reserve to prepare for any future recession.

Partly because of those concerns, “I don’t think he has the votes to do it,” Braun said of Inslee’s plan to tap the emergency fund.

Inslee, too, spoke of the need to be ready for an economic downturn. But he said his plan would leave a healthy balance in the rainy day fund — close to $1.9 billion by mid-2021 — that would enable the state to weather a slowdown.

If Inslee’s plan were implemented, the state’s total reserves would amount to nearly $2.4 billion by the end of the current two-year budget cycle. That's about 4.5% of the state's two-year operating budget.

Braun called that “not enough.”

Inslee also proposes spending about $34 million in his 2020 budget to boost salmon and orca recovery efforts throughout the state.

The governor plans to release additional information about his plans to address climate change on Thursday.

This story has been updated to include additional comments from state lawmakers, as well as more details about Inslee's spending proposal.