The city plans to incorporate braille and information about hill slopes in the signage revamp. 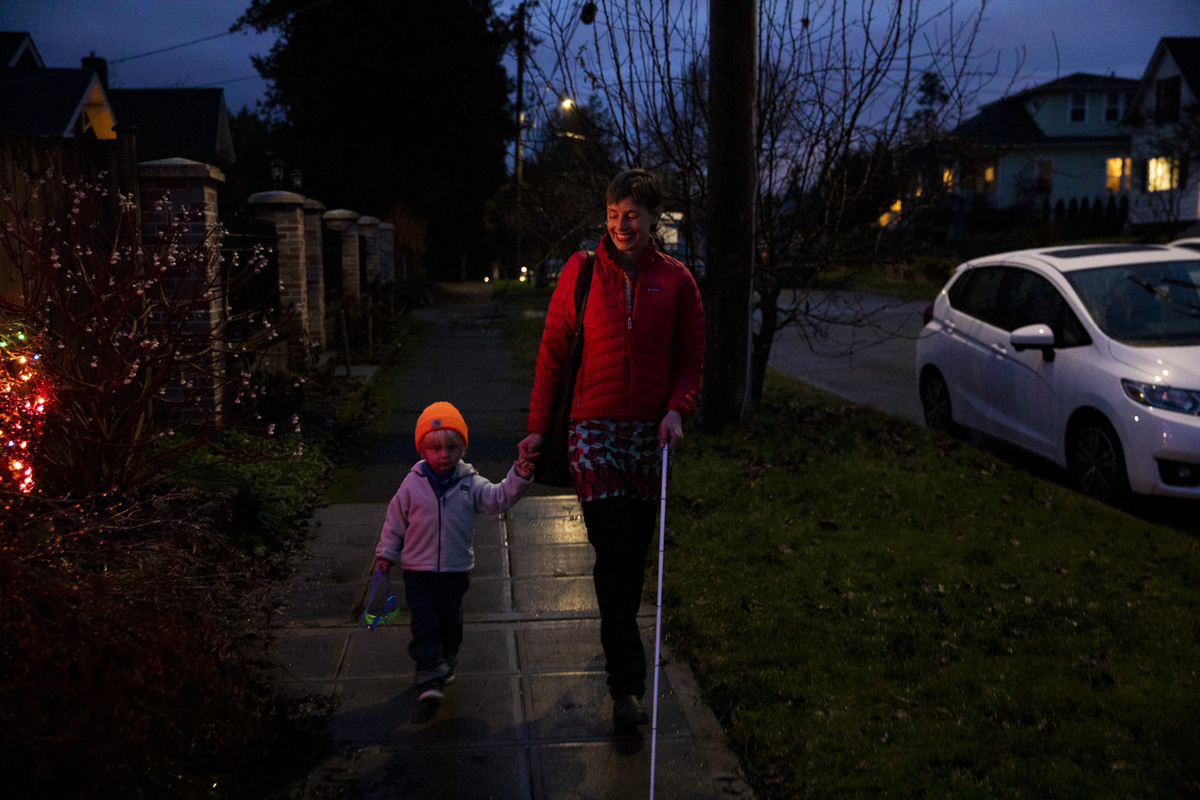 Anna Zivarts and her son, Kaspars, 3, walk together from her Columbia City home to a bus stop on Dec. 14. Zivarts is low vision, so she can’t drive and gets around the city by bus or on foot. (Dorothy Edwards/Crosscut)

Most days, Anna Zivarts relies on Google Maps to get her where she needs to be. She has low vision, which in her case means that she can’t easily detect motion or see details like street signs, so she can’t drive. Instead, she navigates the city on foot and by bus. Sometimes she’s by herself, and sometimes she’s pushing her 3-year-old son in a stroller. But Google Maps alone isn’t always enough to make her journey easy.

For example, some days when she’s with her son, her phone will guide her toward a long staircase that she can’t easily climb with a stroller in tow. Other times, it will tell her to cross a street that doesn't have a marked crosswalk. In general, it hasn’t always been easy for Zivarts to navigate a city that seems designed for people in cars.

“There’s just such basic things that Google Maps [should] figure out how to incorporate into their directions a little more,” she says.

From its hills to transit tunnels to rental bikes blocking sidewalks, Seattle’s landscape is full of obstacles for your average pedestrian. It’s particularly challenging for residents journeying through the city with disabilities, especially those who rely on transit and the ability to navigate on city sidewalks.

As the program director of disability advocacy project Rooted in Rights and a volunteer member of Seattle’s Pedestrian Advisory Board, Zivarts wants to keep the city aware of issues that people with disabilities face when navigating on foot and using transit. While she believes that resources are out there to help — like apps that identify hill slopes or alternative routes — there’s no synthesized source of that information. She adds that not all people with disabilities use their phones to navigate (since not everyone has one to begin with) and rely more often on signage. And most importantly, “if you don’t know [the information] is there, you’re not looking for it.”

“This information exists,” Zivarts says. But, without a resource that provides it all, she says, it’s not always “available to users.”

A new initiative to update signage around the city launched by the city of Seattle could help make the information more accessible to pedestrians of all abilities.

That initiative, called “Seamless Seattle,” focuses on “wayfinding,” the process of navigating through what in this case is an urban environment. Frequently, the term refers to navigational tools for cars, such as highway signs, but the initiative’s principal designer, Aditi Kambuj, says it also refers to how we walk through cities. Making the journey easier is key to increasing the number of people choosing to navigate on foot rather than in a car, she says.

The project is in its early stages, and will include a network of signage, like that found at bus stations, providing information about the landscape. While it includes signs, wayfinding may even involve public art pieces that remind pedestrians where they are.

“If you can meet the needs of those who need the information most,” Kambuj says, “we can safely assume that everyone else is getting that information, too.”

The initiative was born in the city’s 2017 Pedestrian Master Plan, which led Seattle to establish its goal of making 35% of trips by people in the city be achieved on foot by 2035. As The Seattle Times reported, Seattle has already seen a shift away from car ownership, which dropped by 3 percentage points since 2010; currently, 84% of households in the city have cars. New signage is a part of that broader plan and, Kambuj says, it offers a unique opportunity to make the city more accessible to all.

Among disability advocates, rethinking the way we structure cities is key to including disabled people in society. Peggy Martinez, founder of Creative Inclusion, sees wayfinding as another concept where accessibility can play a bigger part.

“It provides independence; it provides efficiency of movement,” Martinez says of accessible wayfinding. Once people are readily able to get where they need to be, “that translates to employment, into people realizing their full potential.”

To make a city accessible, Martinez says you need to approach it from the mindset of someone with a disability. Often, Martinez says, people with disabilities plan their routes from home before starting a journey. And once that journey has begun, she says, many rely on consistent markers to let them know where they are. That’s why it’s important that any new signage be kept in a reliable place.

“You can do your best to learn about an environment in advance of your trip, but that’s a way that is very theoretical,” Martinez says. If something changes along the way and that person’s plan needs to be revised, signage that shows hill slopes, incorporates tactile information or is otherwise accessible for them would help them adjust their route.

Tools like AccessMap offer details about inclines to watch out for, but that’s often only one piece of the puzzle for people making their way through the city. If they need to think about what buildings are accessible or what streets have curb cuts, they’d have to go elsewhere.

“There isn’t a singular place for accessibility and navigation information currently,” Kambuj says. “That’s on my wish list.”

Other wayfinding projects in the U.S., like WalkNYC, which was launched in New York in 2013, have sought to make their cities easier to navigate. But disability advocates often look outside the U.S. when pointing out what an accessible city could look like. Melbourne, Australia, is one example, incorporating braille and tactile signage throughout the city. For many cities, London’s wayfinding initiative, Legible London, has been an early model of an integrated wayfinding system since its launch in 2006. It’s currently the world’s largest municipal wayfinding system and stemmed from a similar reason as Seattle’s project: in 2004, London’s mayor at the time declared that he would make London walkable by 2015, and Legible London was part of that effort.

Adrian Bell, planning director of Applied Wayfinding, was the principal designer for Legible London. He says a guiding question for him in strategizing is this: “How do we encourage people to drive less?”

“Cities that have been designed for driving don’t have the infrastructure or the information for people to make that choice,” he says. “What we’re trying to do… is reveal what's available in a city at a scale that you can understand as a person.”

While much has changed since 2006, accessibility was a key component in Legible London. Bell says the plan had proposed different ways that people with disabilities could access information along their routes. One idea included having telephone booths distributed throughout the city where people could pick up a phone and receive information about their location. Now, Bell says phone apps and other travel aids have generally replaced the need for such booths.

“I don’t think we have a single solution for dealing with accessibility,” he says. “It’s something that everyone is trying to understand.”

While Seamless Seattle is still in its pilot phase, evidence of the plan’s rollout can be seen throughout the city. In transit tunnels, pedestrians can see new signage that displays landmarks in their mapping and include information about the hills of Seattle, specifically identifying which are steeper than wheelchair ramps. Kambuj says that the next phase of the rollout will be early next year and that the project will be evaluated and refined over several months.

Kambuj says future phases will include the addition of braille and tactile information at signaled crosswalks throughout the city to show the user’s location. While Seattle’s project won’t fix all accessibility issues  — the issue of rental bikes and scooters blocking streets is one that continues to go unresolved, for example — Martinez says that plans to include braille and tactile information make her hopeful about easier navigation in the city.

Creating a more accessible city is a large part of the reason why Zivarts first joined the Pedestrian Advisory Board, and she says it’s also why she hopes the voices of people with disabilities are accounted for when making a city more accessible.

“I think there needs to be more people with disabilities in every decision-making body or advisory body,” Zivarts says. When it comes to actually figuring out just how to solve these issues, she adds, “there’s nothing that beats lived experience.”