SATs no longer required for admission at some Washington colleges

Concerns about fairness and bias have fueled a national trend for schools to go ‘test optional.’ 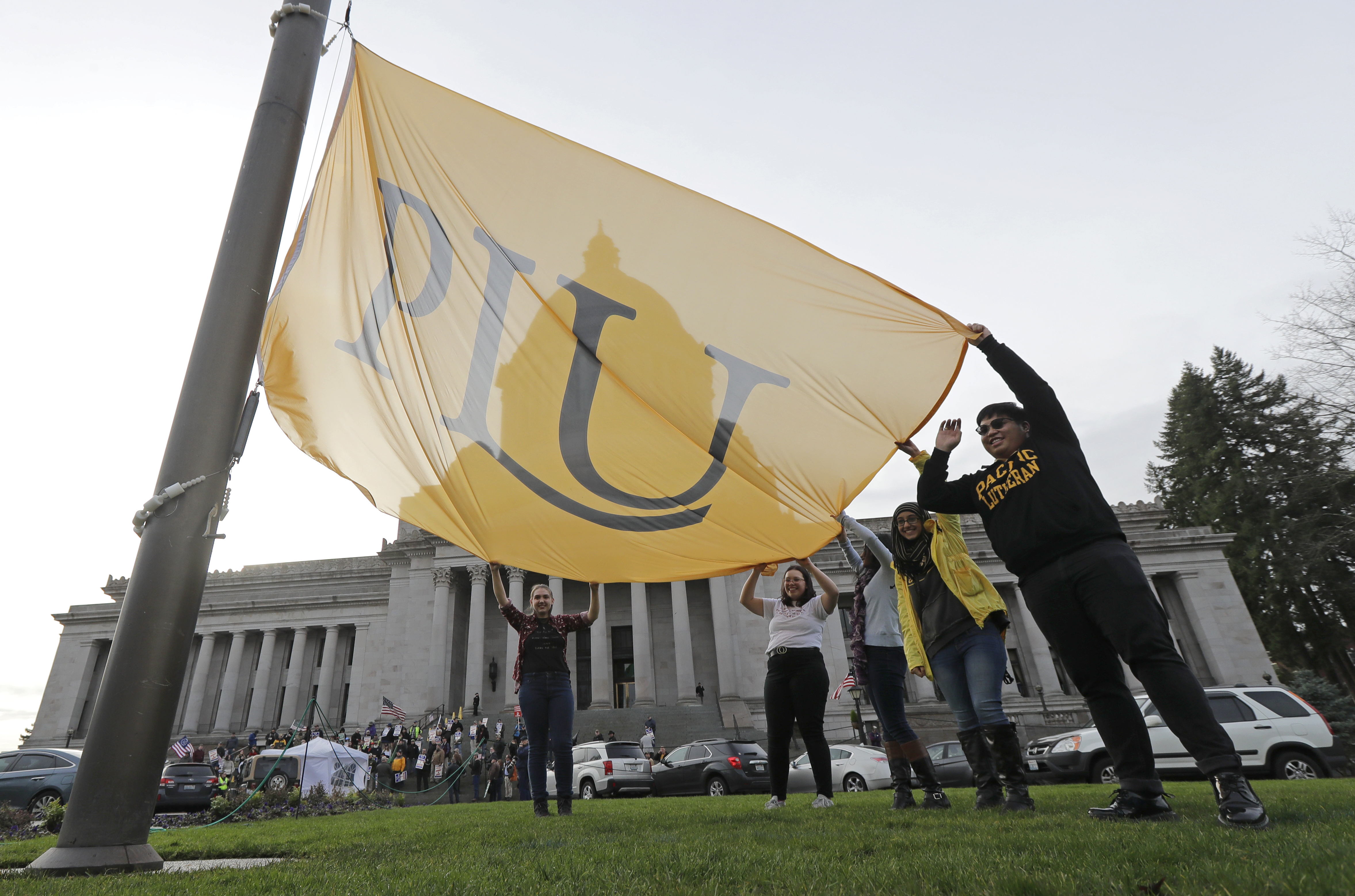 Students from Pacific Lutheran University are shown at the Washington state Capitol on Jan. 18, 2019. The private university — located in Parkland, a community on the edge of Tacoma — is one of a growing number of higher learning institutions no longer requiring SAT or ACT scores for admissions. (Ted S. Warren/AP)

One of the biggest stressors for high school seniors applying to college is increasingly becoming optional instead of mandatory.

In Washington state and across the country, more colleges and universities are no longer requiring prospective students to submit SAT or ACT test scores as part of the admissions process.

Starting with this fall’s freshman class, the top-tier University of Chicago no longer requires students to submit scores from either of those high-stakes tests. The University of California system is considering making a similar change.

Here in Washington state, Pacific Lutheran University in Parkland and The Evergreen State College in Olympia are among the latest schools to adopt so-called “test-optional” policies. PLU stopped requiring test scores from this year’s freshman class, while Evergreen is no longer requiring SAT and ACT scores from students applying to become freshman in 2020.

Other area universities are also working to decrease the importance of high-stakes testing in the admissions process: Central Washington University recently adopted a policy that no longer considers SAT or ACT scores for students who earn a 3.0 grade-point average or above, while Eastern Washington University is discussing whether to go the fully test-optional route, no longer requiring students to submit scores at all.

The move to ditch the SAT and ACT is part of a national trend. According to the National Center for Fair and Open Testing, which tracks and promotes test-optional policies, about 1,050 colleges and universities across the country no longer require SAT or ACT scores as part of the admissions process.

The organization, which goes by FairTest for short, said nearly 50 higher-education institutions jettisoned SAT and ACT requirements for admission between September 2018 and September 2019. That marked a record number of schools adopting test-optional policies in a single year, the group said.

"We started looking at the research, and rarely does the test score show that's the one factor that determines whether a student is going to be successful in college," said Melody Ferguson, PLU's associate dean of admission.

Ferguson said many faculty members at the private university also felt "there was potentially a bias in the exams."

That was a concern for officials at Evergreen, too, said Eric Pedersen, the college's chief enrollment officer.

"There is plenty of research going back at least 10 years, if not 20, showing that there’s various types of socioeconomic and cultural bias in the standardized test, especially in the SAT," Pedersen said.

For instance, one study found that factors such as family income, parents' education and race accounted for 35% of the variation in SAT scores among California high school graduates in 2011.

Those disparities have continued throughout this decade, according to the National Center for Education Statistics. In 2017, the average total SAT score among white and Asian students was more than 150 points higher than the average score among Black students.

Pedersen said he thinks those discrepancies often stem from the ability of a family to afford expensive tutoring to prepare for the SAT.

After looking at the data, members of Evergreen's faculty senate voted in January to no longer require students to submit SAT or ACT scores. Students applying for admission must instead complete a written application statement — no more than 500 words.

"A couple of comments I got afterwards were, 'We should have done this years ago,' " Pedersen said.

The College Board, a not-for-profit organization that develops and administers the SAT, disputed claims that its test is biased. In an email, the College Board shared a statement from the National Council on Measurement in Education, saying "that group differences in college admissions tests do not equate to test bias."

At the same time, the organization said its "mission isn't to ensure all colleges require the SAT."

"Any objective measure of student achievement will shine a light on inequalities in our education system," the College Board's emailed statement said. "Our focus, with our members and partners, is combating these longstanding inequalities."

Both the College Board and ACT Inc., which owns the ACT test, say their tests remain a reliable measure of the skills necessary to succeed in college.

Furthermore, an ACT spokesperson added via email, "Claims that test-optional policies result in greater campus diversity have not been substantiated in independent research."

Yet officials at one private university in Washington state say their decision to go test optional has dramatically changed the makeup of the student body, without adverse side effects or lowering standards.

Whitworth University, located in Spokane, stopped requiring SAT or ACT scores from incoming freshman in 2008. Like other universities, Whitworth wanted to remove barriers to admission for students of color, who were underrepresented in the student body at the time, said Greg Orwig, the university's vice president of admissions and financial aid.

The first year of Whitworth's test-optional policy, 10.3% of incoming freshmen  — 56 students — were people of color. In fall of 2019, students of color made up 37.5% of the incoming freshman class, Orwig said.

At the same time, the average grade-point average of incoming students at Whitworth has increased slightly. The incoming freshman class in 2008 had an average GPA of 3.69, while the fall 2019 freshman class had a GPA of 3.73.

Both of those figures were higher than the average six-year graduation rates for private university students that began their studies about the same time, according to national data.

In place of ACT or SAT scores, Whitworth now allows students to complete a 30-minute phone interview in which they discuss two short articles, Orwig said. The idea is to see if students can identify the main points and themes in written materials, and pull information from those materials to support an argument.

"It's exactly the kind of thing that happens in college classrooms and writing assignments," Orwig said.

The University of Puget Sound in Tacoma, which adopted a test-optional policy in 2015, requires students to respond to two short essay questions in place of submitting test scores.

While private universities have long been able to go their own way when it comes to test-optional policies, until recently, state institutions could not.

That changed in 2016, when the Washington Student Achievement Council, which sets minimum admissions standards for public institutions, began allowing state schools to go the test-optional route.

Now, Eastern Washington University is seriously thinking about giving it a try, said Jens Larson, the university's associate vice president for enrollment management. The regional university in Cheney is looking at adopting a test-optional policy similar to Evergreen's.

If approved, the new policy could take effect with the incoming freshman class of 2021, Larson said.

"There’s something philosophically adrift when we are talking about judging a student on a four-hour test, when we have four years of their academic history," Larson said Monday. He said that, generally, students' transcripts are better indicators of how they might perform in college than SAT scores.

In rural communities, Larson noted, the distance and time required to travel to a testing facility can be a barrier for students, in addition to the cost of taking and preparing for the test.

Still, not all state universities are considering making the switch. Western Washington University in Bellingham continues to require test scores as part of its admissions process, though a university spokesperson wrote in an email that officials are following discussions of test-optional policies "with great interest."

Washington State University similarly requires that students submit SAT or ACT scores — though it doesn't consider them for students whose high-school grade point average is 3.5 or better, or who are in the top 10% of their class. Those students are assured admission to WSU, under a policy that has been in effect since 2009.

Neither is the University of Washington, which is known for being especially selective in its admissions.

He said the university's holistic admissions process has helped it admit diverse classes of students, even while continuing to look at standardized test scores.

Often, SAT and ACT scores help the university identify students who may need a little more academic help, Seegert said. Some students admitted through the holistic review process may be required to take additional academic support classes during their first year, he said.

"Test scores aren’t just about who is in and who is out. It's also about the students we are admitting who could use some additional support," Seegert said.

"That is a very positive use of test scores."