Some Seattle families are just one sick child away from homelessness

Outreach workers say the increasing costs of both housing and health care are forcing more families out of their homes. 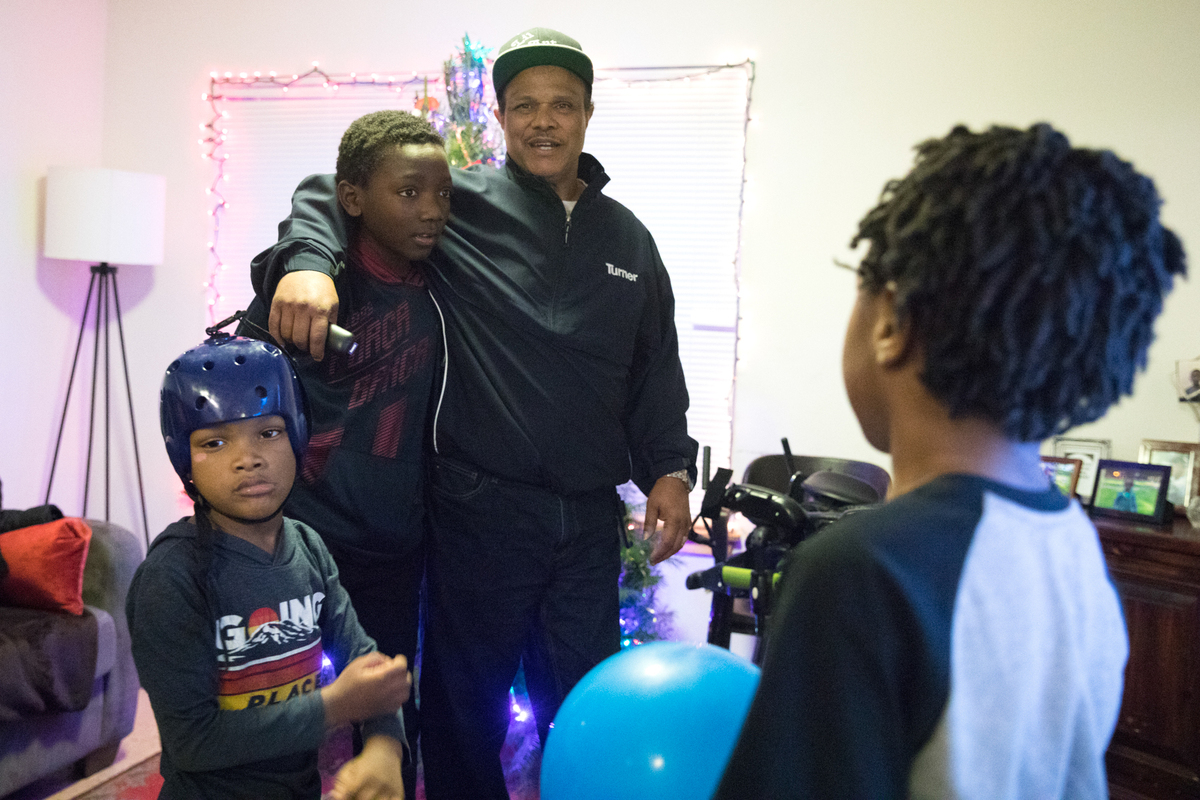 Anthony Battiste hugs his eldest son Christopher, 10, while his other sons, Abraham, 5 (left), and Anthony, 6 (right) join them in the living room of their apartment in Redmond, Dec. 9, 2019. Abraham often wears a helmet to protect himself from potential falls, he was diagnosed with the rare neurological condition of alternating hemiplegia of childhood, which frequently renders him paralyzed. For Battiste, the time and cost associated with Abraham's illness have made stabilizing his family near impossible, but he says he is happy to take it on if it means keeping his family together. (Matt M. McKnight/Crosscut)

About once every week, Ryan Disch-Guzman receives a referral for a family with a very sick child. It's his job to prevent them from becoming, or remaining, homeless.

Disch-Guzman, the outreach manager at Mary's Place, ticks through some of his recent clients: One child had gone through open-heart surgery; another had brain cancer; another was in a wheelchair. A quarter of the families who come through the organization's family diversion shelter, which aims to get families housed within 30 days, have at least one child with a serious or chronic illness, he estimates.

"It's shocking," said Disch-Guzman. "We just housed a family that was unsheltered that had a terminally ill child. We have one that needs a kidney transplant. There are so many families in these situations."

As both housing and health care grow more expensive, losing even one income in order to care for a sick child has become increasingly destabilizing. For some families that Mary’s Place serves, an illness has derailed them from what was an already unstable position. Others have traveled to be closer to Seattle's medical institutions, only to find they can't afford a place to stay once they arrive. Still others have already struggled with homelessness, but the onset of a child's illness has made escape all the more difficult.

Mary's Place, founded in 1999 and one of few organizations specifically serving families struggling with homelessness, has not closely tracked how many of its clients come through because of an ill child. But it has noted enough of an uptick that it recently created a new program specifically to perform outreach in local hospitals and designated 10 of its current shelter beds for families with sick children. It plans to add 30 more soon in its new, Amazon-provided shelter. Next year, the organization will more closely track the number of children who come with life-threatening or chronic illnesses, said Disch-Guzman.

Hospitals, too, have made adjustments. No longer is it enough for medical professionals to simply address the health needs of children; increasingly, they must also ask where the family plans to stay once they're discharged, according to Roosevelt Travis, director of social work at Seattle Children's hospital.

Despite increased attention, hospitals are still often unable to provide enough support to keep a family housed. It's not uncommon for Disch-Guzman and his team of outreach workers to meet families staying in cars just outside the hospital's doors.

"The hospitals themselves don't have the systems in place," he said. "That's why we go, that's why we, as a team, have had to go out and do outreach at Swedish and Cancer Care Alliance and in Children's, because we were getting their patients because … they would be discharged to homelessness."

An uptick in demand

James Kally first saw a sign of the illness in his daughter's eyes, which had begun to turn yellow. Soon after a doctor delivered the diagnosis: liver damage. He sought medication for her and she was healthy for a time. But a month after the yellowing faded, she started feeling weak, sometimes going to sleep as soon as she returned from school. So Kally took her back to the hospital, where further tests showed that she had aplastic anemia — a rare bone marrow condition that slows production of new blood cells.

Kally, his wife and their three children moved to Seattle from Hawaii in 2015, before their daughter’s diagnosis. They lived for a time with his sister, all of them crammed into his sister's home, which is when his daughter became ill. But Kally’s sister was living in Section 8 housing and they couldn't stay with her long. Kally hoped to find a job and an apartment, but his daughter's illness and many appointments made it difficult to keep full-time work. Soon they were facing homelessness.

With the help of Mary's Place, they moved into a Burien shelter, itself once a hospital. The other kids couldn't be left alone there, which meant both parents were unable to work steadily. While one cared for their daughter, the other stayed with her siblings. "That was a very hard time for us," said Kally. 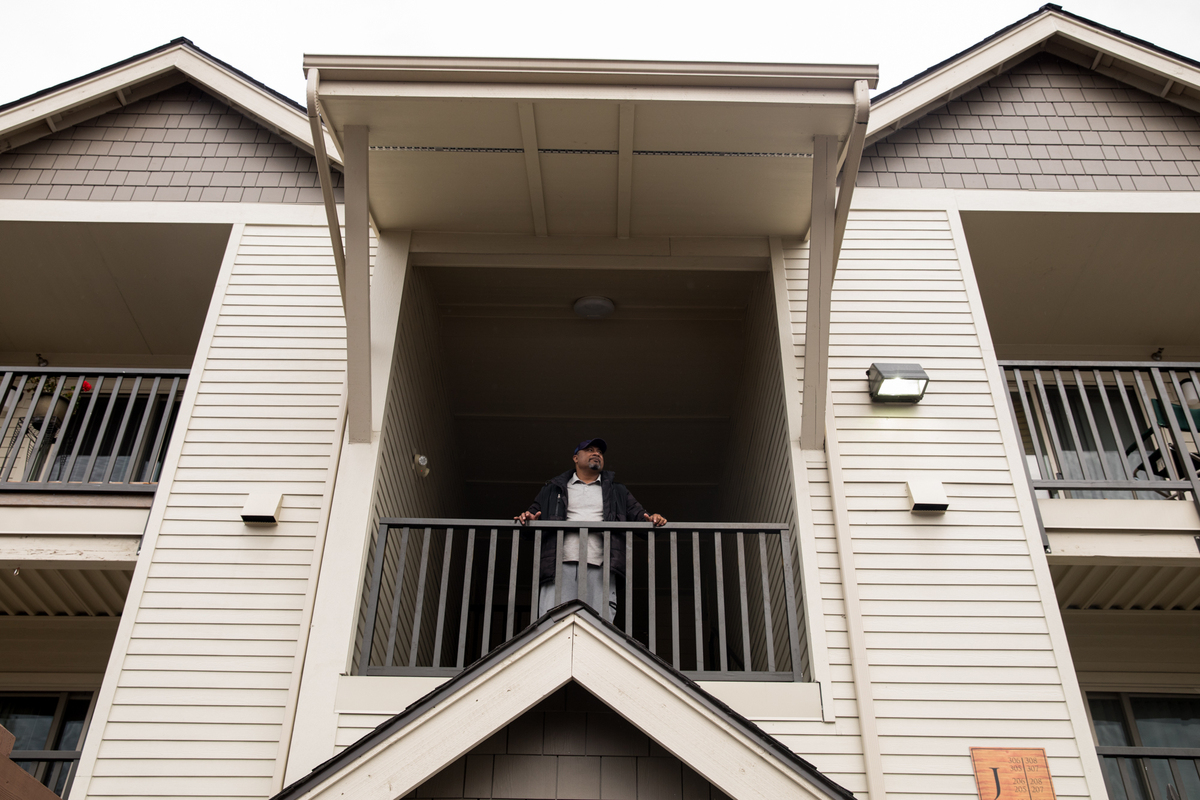 Dr. Joe Sherman is the health services director at Mary's Place. The organization is limited in the medical care it can provide, instead doing the best it can to accommodate the needs of the families.

"Are we just recognizing what already existed or is this something that's happening more and more? I think it's a combination of both," he said, when asked why there's been an uptick in demand for shelter at Mary's Place.

"I think the greater factor was the realization that as the cost of living in Seattle, King County started to increase, then that threshold of homelessness, the threshold of being able to cover all your expenses, your rent and everything, for many families that threshold started to become closer and closer to the reality," Sherman said.

For families already teetering on the edge of stability, without sick leave or an income great enough to build up a buffer, said Sherman, a medical event will easily tip them into homelessness.

"The hospitals have started seeing it more," said Sherman. "I think health care providers and other social service providers started to see it more."

Institutions like Seattle Children's hospital are reckoning with the possibility that families may leave the hospital without somewhere else to go. In just the past three to five years, Travis, the hospital's director of social work, has noticed more families exiting to an unstable living environment. "When I arrived here 13 years ago, housing or the loss of housing was something we discussed seldomly," he said.

The Ronald McDonald House, located nearby, hosts families while their children are in the hospital. But after the child is discharged, the families are on their own and often must return for frequent follow-ups, incurring greater costs and disrupting work lives.

"When you have a child who is ill and you're coming to and from the hospital, we've seen many parents lose their employment," said Travis.

Travis said Children’s is working to improve its response to housing instability, including asking families earlier in their child's treatment where they slept most recently. Additionally, Scott Bingham, an information technology professional at Seattle Children's, recently started Housing Solutions for Hope, which raises funds to provide housing help for families who come through Children's.

But Dr. Sherman said the shift has been slow, as hospitals struggle to define the boundaries of their responsibilities.

"The social ills are all now all of a sudden coming to our doorstep in the form of this family that now has nowhere to go when we discharged their child from the hospital," he said. "I think [the hospitals'] response was one of overwhelm and one of, I would say, believing that this is not in their purview, this idea of 'We've got so much else that we've got to deal with, who else out there can provide something for these families.' "

But, until recently, there hasn’t been anyone else. It's this reality that has pushed Mary's Place toward working with medical institutions and developing plans when a family is facing homelessness upon discharge.

"We've done this because we've realized that no one else was willing to," said Disch-Guzman.

He added that if there were earlier and more systematic interventions, many families would never have ended up in a shelter to begin with. Most of these families need only light financial or housing support and are well-positioned to regain some stability once the chaos of the hospital visits subsides.

But those early interventions often don't happen. So Disch-Guzman and his team have begun entering hospitals, doing outreach to families and working to educate health care workers to ask the right questions and make the right referrals.

"The hospitals are open to us doing more," he said. "But it's been a big education piece to understand how important it is to offer these services."

Once a family has fallen into homelessness, having a sick child makes escape even harder. Anthony Battiste lost stable housing after a split from his partner. He and his four young boys stayed in a Mary's Place shelter for a time and, with the organization's help, recently moved into a temporary apartment in Redmond.

But while they were staying in shelter, his son Abraham, 5, was diagnosed with alternating hemiplegia of childhood, a condition that frequently renders him paralyzed. For Battiste, the time and cost associated with Abraham's illness have made stabilizing his family near impossible.

"There's been times where I could have received units, but because Abraham needs accommodations, I wasn't able to take the units," he said.

The challenges for Battiste and his family serve as an example of a compounded problem: The region's overall lack of permanently affordable housing, when combined with a frayed safety net for people who need the help, leaves families like his without many options.

"I think there's this perception of, 'Oh, they're just not working and they're sitting on the system,' " said Disch-Guzman. "From our experience in what we see, this life event happened in this family, and this is why they're in this situation."

While James Kally's daughter was sick, the family once obtained housing, only to lose it again six months later. Kally and his wife still couldn't work and their temporary subsidy ran out.

Kally's daughter is healthy now, after he successfully provided her with his bone marrow for a transplant. Both he and his wife quickly returned to work after the transplant — he as a facilities manager in a senior living facility, she at a hotel. With dual incomes and a healthy child, they were able to afford the rent in a slightly subsidized apartment building in Federal Way.

But even as they move into their new apartment, Kally worries that there will be permanent scar tissue, especially for his three kids. For them, it will live "in their minds for the rest of their life that we were in that situation."