Washington schools don't have to teach sex education. That could soon change

Washigton state law requires school districts to either teach medically accurate sex ed or not teach it at all. Some districts have opted not to teach sex ed at all because of conservative values in their communities. (Ann Hermes/The Christian Science Monitor/Getty)

Battle Ground Public Schools set out in 2018 to establish a high school sexual health education program that would be inclusive of all its students. Instead, the district ended up alienating parents on both sides of the political spectrum.

As The Columbian first reported, the Battle Ground School Board in October rejected a proposed comprehensive sex education curriculum meant to appeal to varying value systems in the conservative Clark County town.

A summary of community input on the curriculum states that parents “on both sides of the conservative-versus-liberal spectrum” expressed concerns that the curriculum would “work against [the district’s] goal of being inclusive to all students.” In particular, community members worried about how the coursework would impact LGBTQ students and those with faith-based values.

Battle Ground in October also scrapped a district policy obligating schools to teach the subject, apart from a fifth-grade human growth and development course and the state’s baseline requirement of teaching HIV prevention.

Additionally, the school board voted on Monday to allow sexual health education topics to appear in elective high school courses. But Battle Ground remains one of several school districts in the state without an official sex education program exceeding minimum state requirements.

“I think what happened in Battle Ground is that some very outspoken and misinformed community members who … oftentimes are not even parents of kids in the schools [are] deciding for other families what their kids will have access to and their education,” said state Rep. Monica Stonier, D-Vancouver, an advocate for comprehensive sex education.

Currently, Washington is one of 21 states that don’t require schools to teach sex education. However, since 2008, state law has mandated that schools that do offer sex education must employ a curriculum that is "medically and scientifically accurate,” and must include methods beyond abstinence to prevent pregnancy and sexually transmitted disease.

While most school districts in Washington are delivering sex education, a survey of districts administered by the state Office of Superintendent of Public Instruction during the 2018-19 year found that at least 19 of the state’s 295 school districts are not offering more than the minimum that the state compels.

Advocates hope to see new Washington laws in 2020 that will require schools to provide much more.

Legislation that would have required all school districts to offer K-12 comprehensive sex education passed the Washington state Senate earlier this year, but failed to make it out of the House of Representatives. Senate Bill 5395 was born, in part, from conversations Sen. Claire Wilson, D-Federal Way, had with college students.

“We talked about the #MeToo movement. We talked about the concept of affirmative consent, which is not something that necessarily is something everyone … understands fully,” said Wilson, the bill’s primary sponsor. “When young people go to college, they find themselves sometimes in [difficult] situations. And if you've never talked about it and you're in a situation, you don't know how to get out of it.”

Wilson, who previously taught teen parents at Mount Tahoma High School, added that misconceptions about the influence of sex education are partially to blame for the pushback against the bill, which was requested by state Superintendent Chris Reykdal.

“Young people need to know about themselves in their bodies,” Wilson said, noting that families would’ve still been able to opt their children out of sex education under her proposal. She plans to revive the bill in the 2020-21 legislative session.

“And talking about it doesn't mean that they're going to go do it,” she said. “And oftentimes, young people nowadays don't have places where they can get information and can ask questions.”

Wilson also pointed to what she said is a general misunderstanding about how sexual health teaching would show up in K-5 classrooms. Susan Sellers, who teaches physical education at Lynnwood Elementary School in the Edmonds School District, said age appropriateness is key.

“It's just talking about basic body anatomy,” Sellers said. “That word ‘sexual’ sometimes gets really misconstrued or taken way further out of context than it should be.”

Other fundamental parts of what Sellers teaches involve learning about physical contact, personal space and how to establish boundaries.

A 2017 survey administered by the Centers for Disease Control and Prevention found that 40% of high school students had engaged in sexual intercourse. The survey also revealed that nearly half of students who had had sex in the past three months didn’t use a condom during the most recent occurrence.

Research also indicates that health-risk behaviors are typically picked up during adolescence. On that account, schools can play a significant role in preventing students from adopting poor health habits and influencing public health outcomes.

Yet, when it comes to measuring the impact schools’ sex education offerings have on public health outcomes, it’s not always clear cut, said OSPI's Dils.

The survey that OSPI conducted, showing 19 schools offering the minimum in terms of sex ed, also solicited information about which curricula school districts are using and for which grade levels. But of those who reported offering a curriculum, it’s unclear how comprehensive their instruction was.

“Really, what the term ‘comprehensive’ means is both a wide array of content but also over time and sort of building on the information that's been provided in earlier grades,” said Dils, who added that there may be wide variance in curricula across individual school districts.

“We don't have the capacity to do much of a data analysis, just because everything's reported really differently,” Dils said. “So for some things, we have county-level data, for other things we have district-level data; in some cases it's just regions. We’re comparing apples and oranges in some cases.”

However, a health impact analysis of SB 5395 asserted that there is “strong evidence” indicating that comprehensive sexual health education would improve reproductive and sexual health outcomes for students. The report also referenced a body of research suggesting that comprehensive sex education is more effective for promoting positive health behaviors and outcomes than the abstinence-only approach.

Moreover, a workgroup commissioned by the Legislature to identify gaps in the use of such curricula across Washington concluded that all students would benefit from K-12 comprehensive sexual health education.

A legislative report published Friday outlines findings that various groups — including students with disabilities, those who identify as LGBTQ and children living in conservative communities — are often excluded from relevant and inclusive sex health instruction. Moreover, the report affirms a need for any effort to mandate comprehensive sex education to clarify which topics K-3 students would be taught.

With such findings in mind, Rep. Stonier is co-sponsoring another proposal to make comprehensive sexual health education mandatory. The bill was prefiled in April and will be discussed during the upcoming legislative session.

The contents of House Bill 2184 mirror much of SB 5395, such as an emphasis on affirmative consent teachings and inclusivity across gender and cultural lines. But Stonier’s bill would allow school districts three years to comply with new mandates, as opposed to the two years outlined in earlier legislation.

“I think that the second version of that bill is a little bit more responsive to the realistic needs for implementation,” she said, adding that school districts across the state will need adequate time “to prepare their communities for a comprehensive sex ed curriculum.”

While there isn’t currently a state-produced model sex education curriculum in Washington, OSPI, in collaboration with the state Department of Health, does provide districts a list of approved curricula. Dils pointed to Seattle, Tacoma, Vashon Island and Methow Valley as school districts with well-implemented, comprehensive sex education curricula.

For its part, OSPI will continue to support efforts in the Legislature to mandate K-12 comprehensive sex education, said spokesperson Katy Payne.

“In spite of the controversy in communities like Battle Ground, the polling continues to suggest that the vast majority of parents support the provision of sexual education in public schools,” said Dils, referencing a nationally representative poll conducted by Planned Parenthood in 2014. 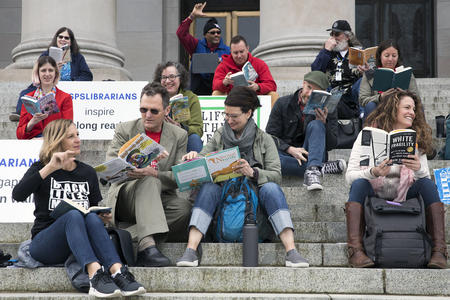 Facing cuts, Seattle school librarians fight to save their budget

Seattle Public Schools plans to cut 24 librarians from full-time to part-time next school year due to projected budgeting shortfalls.

by / April 5
Article continues below

Facing cuts, Seattle school librarians fight to save their budget

Seattle Public Schools plans to cut 24 librarians from full-time to part-time next school year due to projected budgeting shortfalls.