The anti-Bezos may be coming, but he won’t save us

More than benevolent billionaires, what we really need is democracy. 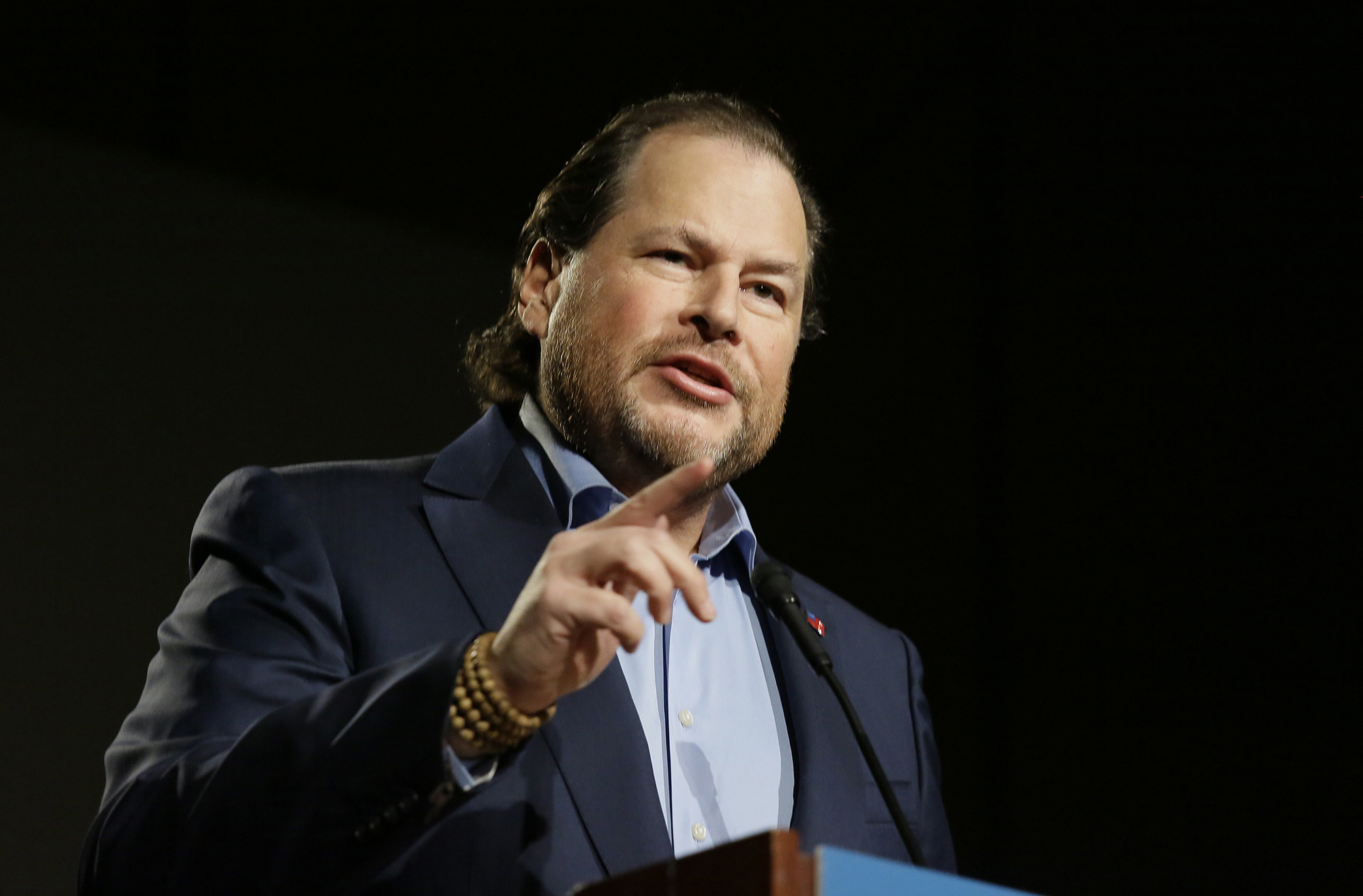 Salesforce CEO Marc Benioff speaks at a SPUR luncheon in San Francisco. Benioff spoke in support of a local ballot measure that would levy an extra tax on hundreds of the city's wealthiest companies to raise $300 million for homelessness and mental health services. (Eric Risberg/AP)

Lately, Amazon has really been owning the role of Seattle’s crappy boyfriend. You ask him to lift just a finger to help out at home, he flies into a rage and pretends to leave, trying to make you feel you’re the one being unreasonable. Sure, sometimes he brings you gifts (though not always thoughtful ones) and you can almost convince yourself he cares. But then he won’t even let you make your own decisions without berating you and telling you (in a really loud voice!) what you should do when it’s obvious he’s just out for his own selfish interests. When he learns you’ve been talking with your family and friends about his behavior, he threatens to shut you up.

Last fall’s city council election results showed a Seattle starting to stick up for itself. It wasn’t long before the stage was set for a new fight. By mid-January, Councilmember Kshama Sawant had launched a campaign to “Tax Amazon” and other large corporations to the tune of $200 million to $500 million per year. The speculation began: What will Amazon do this time? Double-down on the abusive boyfriend schtick, or try out some new strategy? But as we all gear up for another contentious debate about who pays taxes and who bears responsibility for solving the city’s problems, I have another question: Who’s going to step up and be the anti-Amazon?

For rival tech companies eager to enhance their public image, Amazon’s aggressive, take-no-prisoners style creates an opening to assume a different role: the good guy. For a model, they need look no further than San Francisco. When a broad coalition proposed a tax on big business to address that city’s homelessness crisis in 2018, Salesforce — headquartered in San Francisco and the city’s largest tech employer — reacted very differently than Amazon did in Seattle that same year. Not only did Salesforce CEO Marc Benioff not fight the measure, he made it his personal cause, contributing an astounding $7 million to the campaign. The tax passed at the ballot with over 60% support, and is expected to generate about $300 million each year.

Of course, that kind of all-in spirit is exceptional — Salesforce went as high as Amazon went low. Here in Seattle, it would be a refreshing change just to have a major corporation participate in a public discussion of progressive tax reform and funding basic needs with an attitude other than “no, never, over my dead body.”

You could argue that Microsoft is already playing this role, with its largesse (sorry, loans) for affordable housing, support for a state tax on large tech firms and new climate change commitments. But I’m talking about Seattle politics — Microsoft doesn’t have enough of a presence within our city limits to play a major role in Seattle tax debates.

So who will be Seattle’s Marc Benioff? It’s not beyond the realm of possibility that it could be the man himself — after all, Salesforce recently acquired Seattle-based Tableau, and Benioff has, somewhat cheekily, referred to Seattle as Salesforce’s HQ2. But there are other candidates, too. How about Google, which may have tacitly supported a “head tax” in its hometown of Mountain View, California, also in 2018? Or Facebook, which has been expanding its presence in our city — it’s based in Menlo Park, California — and could use some good PR? Or Expedia, which recently relocated its headquarters from Bellevue to Seattle and opened a campus for 5,000-plus employees?

We’ll just have to wait and see. Clearly there’s space in Seattle politics for at least one anti-Amazon, and advantages — news headlines, grateful elected officials, not to mention the pleasure of doing the right thing — await the corporation that first takes the plunge. A more complicated question is how we should feel about it when that happens.

If you’re someone who thinks our society’s ills can be solved with a sprinkling of corporate responsibility, the emergence of the anti-Bezos will be an unalloyed good. It’s everything you’ve been waiting for! If, on the other hand, you’re someone who believes that billionaires shouldn’t exist and, ultimately, that private for-profit corporations shouldn’t exist, it may even feel like a step backwards. After all, when the wealthy and powerful play nice and agree to incremental reforms, that’s one way to diffuse discontent and dampen momentum for more systemic change. Amazon’s bluntness provides a kind of clarity: We don’t have to pretend that in the end we all want the same things.

But you don’t have to be on Team Socialism to feel troubled. It’s easy to object to Amazon’s millions sloshing around our elections — but is it really that much better to have Benioff’s millions buying a big business tax? Our public policy decisions shouldn’t be at the mercy of billionaires prone to Twitter spats, whatever their personal politics and agendas. If a big business tax is a good idea, we shouldn’t need any corporation’s blessing to get it done. That’s what democracy is for.

Not surprisingly, recent polling confirms that a majority of Seattleites believe corporations wield too much political influence in our city. There are really only two things we can do about this. First, we can clamp down as much as possible on corporate spending in elections — an effort already well underway in Seattle, thanks to Councilmember Lorena González. The second project is more difficult: We have to dramatically increase the influence of people in politics.

Politics is, or should be, a group activity. It’s through conversation and debate with our peers that we arrive at a shared reality, an understanding of who we are and what’s good for us and what future we can build together, that isn’t susceptible to being swayed by an ad on Facebook or TV. Today, after nearly a half century of decline, our civic infrastructure is feeble and participation in public life is shallow. Too many people are isolated, with no political community, or any sense that having one would do them any good. That needs to change. For that to happen, those who appreciate this problem and who care about the future of democracy — whether they envision a better-regulated capitalism, a socialist revolution or some other path — need to devote ourselves to solving it. The anti-Bezos might be coming, but he won’t save us.